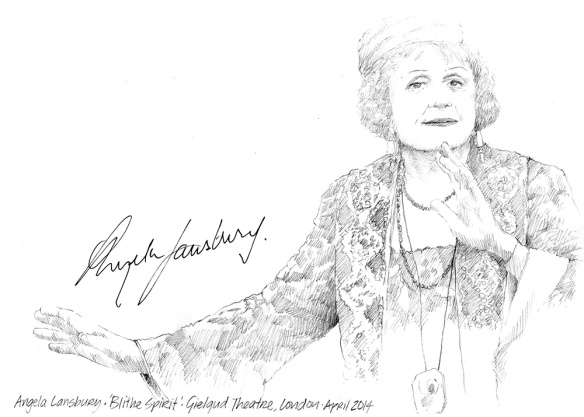 She reunites with director Michael Blackmore to reprise the role of one of stage’s most loveable gargoyles, the dotty mystical fraud, Madame Arcati. “It’s a  character Dame Angela adores. She’s completely off the wall but utterly secure in her own convictions.” She won her 5th Tony playing the part in 2009.

A sprightly (maybe spiritly) 88, she’s the oldest performer appearing on the West End stage, seven years Robert Vaughn‘s senior (who appears in Twelve Angry Men at the Garrick.) It’s a remarkable performance. She’s on stage for most of the two and a half hours with a huge amount of lines and some energetic dance routines.

Arguably “the most distinguished man of letters in English history” was Dr Samuel Johnson, poet, essayist, moralist, literary critic, biographer, editor, lexicographer and the man who gave us the English dictionary.

After nine years work, Johnson’s Dictionary of the English Language was published in 1755. It was considered on of the greatest single achievements of scholarship and until the completion of the Oxford English Dictionary 150 years later was the pre-eminent British dictionary.

He is the subject of A Dish of Tea With Dr Johnson, a sellout at the Edinburgh Festival and a hit on tour.

Ian Redford’s moving central performance in the title role was “detailed and touching”. Johnston “was a man ravaged by melancholy and anxieties but capable of articulate speeches” and “darts of wit”.

Joining Ian as the high society hostess and Johnson’s final unrequited love, Mrs Thrale, was Trudie Styler. She was “dug out of retirement by director Max Stafford-Clark to return to the West End with a part that “instantly won her over… she got to come on stage in an 18th century costume and provide the fireworks fo the last 20 minutes.

Both Ian and Trudie signed my sketch in the lobby of London’s Arts Theatre, prior to the evening performance on 12 September 2011. 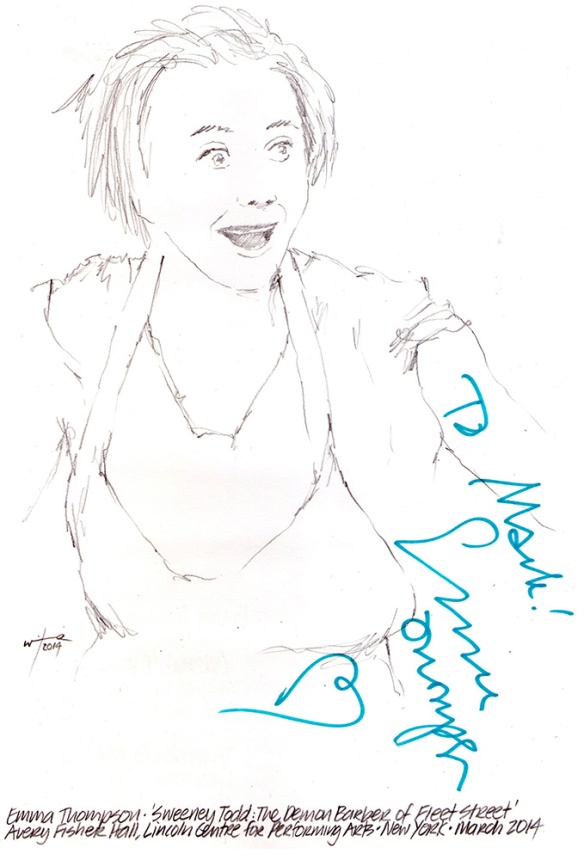 Emma Thompson returned to musical theatre after a 30 year break to make her New York stage debut in Sweeney Todd: The Demon Barber of Fleet Street to critical acclaim alongside Bryn Terfel as the serial-killing shaver. She last appeared on the boards in London in 1989 in Look Back in Anger. With her then husband Kenneth Branagh and in the musical Me and My Girl with Robert Lindsay in 1985.

For five performances she played Mrs Lovett, London’s worst pie maker in the concert production of the Sondheim’s classic, seminal musical at the Avery Fisher Hall at the Lincoln Centre for the Performing Arts in the Big Apple. Backed by the New York Philharmonic Emma wowed the critics last month, one saying she, “not only held her own against more experienced vocalists, but wound up running off with the show”.

I quickly drew this minimal line drawing when I found out she would be attending the Empire Awards at the end of March, where she was nominated for Saving Mr Banks. Like the trooper she is, Emma signed for everyone, including my sketch, “Oh Sweeney,” she smiled, “I hope you win,” I said. “So do I,” she replied – and she did. 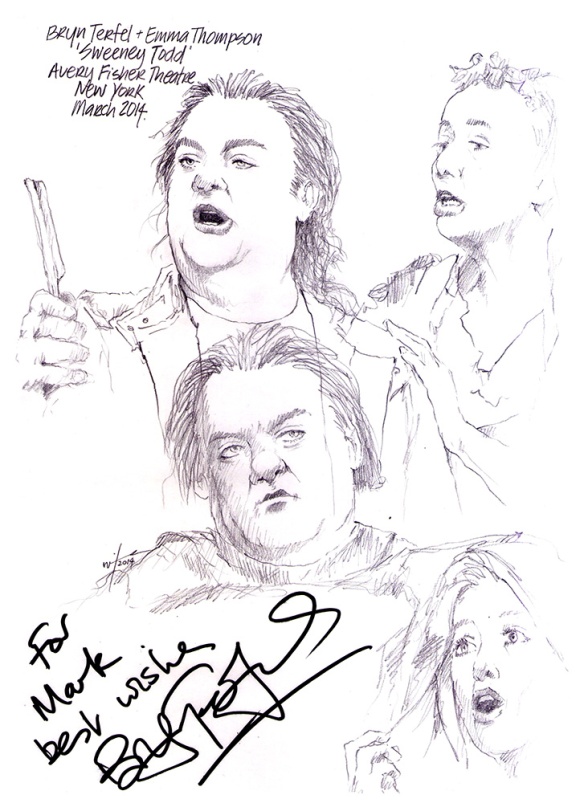 Legendary Welsh bass-baritone Bryn Terfel was born Bryn Terfel Jones, but there was already another Welsh baritone named Bryn Jones, so chose Bryn Terfel as his professional moniker. Well, that’s sorted and he signed that name on my sketch of him as the title character in the concert performance of Sweeney Todd, The Demon Barber of Fleet Street. Sonheim’s musical thriller was staged at the Avery Fisher Theater, Lincoln Centre in New York last month (March 2014) with Emma Thompson returning to musical theatre as Mrs Lovett.

Bryn signed the drawing at the Royal Opera House stage door before his final performance as Mephistopheles in David McVicar’s Faust.

In December last year British actor Dominic West and Prince Harry were part of three teams competing to reach the South Pole first on the trek to raise money for the charity Walking with the Wounded. The competition part of the race was cancelled due to hazardous weather conditions, so the teams combined forces to successfully reach the pole.

He is nominated for a TV BAFTA for his role as Richard Burton in Burton & Taylor. Helena Bonham Carter, who played Elizabeth Taylor, is also nominated.

In June 2011 Dominic took the title role in Simon Gray’s classic comedy Butley at the Duchess Theatre in London. Dominic is always great with ‘graphers and was more than happy to sign this rapid 4b pencil sketch at the stage door on the way in for a July Saturday matinee performance which I saw. 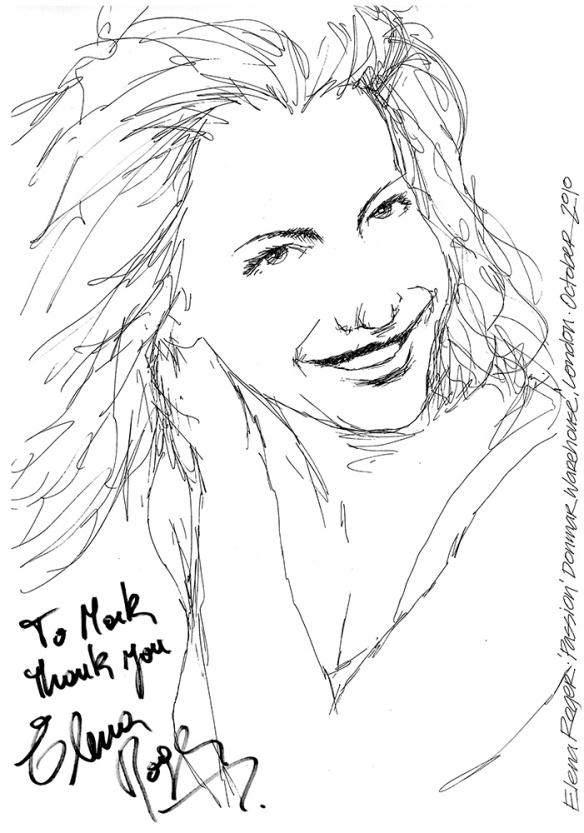 Elena Roger is an Argentine actress and singer who won the Olivier Award for Best Actress in a Musical in 2009 for her portrayal of Edith Piaf in Piaf.

She was discovered in her home city of Buenos Aires when Andrew Lloyd Webber’s Really Useful Group were researching for the 2006 West End revival of Evita and was cast as Eva Peron. She won critical acclaim and an Olivier nomination. She reprised the role last year at the Marquis Theatre.

Elena signed this black fineliner drawing on the final night of Passion at the Donmar in November 2010. She played Fiona in Stephen Sondheim’s musical about a young soldier in 19th Century Italy and his obsessive love with her character, earning yet another Olivier nomination.

The 31 year old British actress Rebecca Hall won the Supporting Actress BAFTA in 2007 for Red Riding in the Year of Our Lord 1974 and was nominated for Leading Actress n 2013 for her role as Sylvia Tiefjens in BBC Two’s Parade’s End.

Her latest film Transcendence with Johnny Depp and Morgan Freeman will be released in the UK this Friday (25/04/14).

Rebecca signed this very quick fine biro portrait at the BAFTA screening of The Town with Ben Affleck at the Odeon West End in September 2010.

This is the second sketch of Tamara Rojo, The English National Ballet’s principal dancer and artistic director, signed for me this month. She is reuniting with Cuban star Carlos Acosta for the classic romantic tragedy Romeo + Juliet, (which they last performed in 2011 for the Royal Ballet) at the Royal Albert Hall in June 2014.

Irish singer and actress Jessie Buckley made her Globe debut in April 2013, playing “a tomboyish” Miranda opposite Roger Allam‘s “delicatedly handled” Prospero in The Tempest. The Bard’s last great masterpiece with a modern twist.

Jessie signed my sketch, which I left at The Globe and wrote me a lovely note, appreciating my support and the rendering.