Irish actor Chris O’Dowd made his Broadway debut as the mentally disabled migrant Lennie Small in the dramatisation of John Steinbeck’s 1937 novella Of Mice and Men at the Longacre Theater in March 2014. He teamed up with fellow Great White Way debutant James Franco, who played the distressed George. Both characters are displaced ranch workers during the Great Depession in California.

For the limited 18 week season Chris was nominated for a Tony Award. Tim Wickens four star review in The Telegraph says, “loose-limbed and lumbering, O’Dowd is a revelation as Lennie – a giant of a man left childlike and painfully innocent by a head injury suffered in his youth”.

Sending sketches to Broadway Theatres can be a bit hit and miss, especially if you want multiple cast members to sign it. I did send one of Chris and James and Leighton Meester to the Longacre, but nothing came back so I drew one of Chris as Lennie and hoped to get him to sign it in person in London when he was promoting his latest Moone Boy book at Waterstones. But as the saying goes (and the basis for the play; the best laid plans of mice and men went astray. In the end I sent it to his agent with better success. 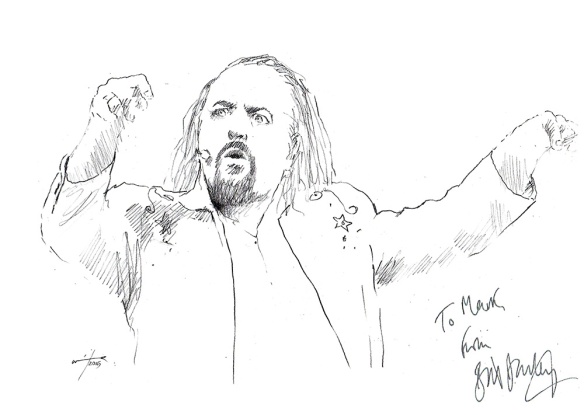 English comedian, musician, actor, TV and radio presenter and author and the latest person to ‘graph one of my sketches, Bill Bailey has just finished doing some work in progress shows at London’s Leicester Square Theatre.

Listed in 2003 by The Observer as one of the 50 Funniest Acts in British Comedy, Bill was also voted the 7th greatest standup comic on Channel 4’s 100 Greatest Stand Ups. As patron of International Animal Rescue, his pet project was the campaign to rescue dancing bears. For his conservation work he received an honorary doctorate from the University of the Sunshine Coast in Australia. He also has a a plant named after him – Nepenthes X Bill Bailey.

Due to the usual number of diversions and delays associated with multiple stage door stalking, on his final night I missed Bill. It would have also helped if I had got the time right. Those 24 hour clock times always get me… So I thought I’d just send it to him.

It said on his website to allow a month for a reply. I think I got home from posting it and the item was sitting in my post box! Slight exaggeration for comic effect, but he was quick.

A few visual interpretations of the fast moving FIFA scandal

Bradley Cooper returns to the role of disfigured London celebrity Joseph Merrick – better known as The Elephant Man for a three month run on the West End.

Although The Elephant Man is expressionistic in style, it is based on true historical events. Joseph Merrick (referred to as “John” in the play) suffered from a condition that no one had properly recognised. After being toured around the UK and Europe under the not-too-flattering title, he is rescued by surgeon Frederick Treves who studied him at the London Hospital in White Chapel up until Merrick’s death in 1890.

The play, written by Bernard Pomerance, premiered at the Booth Theater on Broadway in April 1979 and returned there for a much-lauded revival last winter. It has garnered 4 Tony Award nominations, including one for Bradley for Best Performance by a Leading Actor in a Play. There are also nods for fellow leads, Patricia Clarkson and Alessandro Nivola and for Best Rvival.

As the script instructs, Bradley declines make up and prosthetics. Instead he contorts his body and his face, adding layers of speech as he gulps and gasps to communicate through mishappen lips.

Director Scott Ellis stages an anatomy lesson with Treves addressing his students in front of a full length photograph of the near-naked Merrick and Bradley performs a mimed illustration of the lecture.

In her Variety review, Marilyn Stasio writes : “as Nivola’s Treves dispassionately drones on about his subject’s twisted limbs and misshapen torso, Cooper stands stock still in a cone of light and silently contorts his own perfect body into an approximation of each deformity. The piece de résistance is the depiction of the wide slobbering aperture that is Merrick’s mouth. Shaping his own mouth into a fleshy oval, the thesp gives expressive voice to the sensitive and intelligent human being imprisoned in his own body. It’s a stunning  performance, deeply felt and very moving”.

Bradley returened to normal to greet fans at the stage door barriers on opening night.

The US cast, led by Bradley Cooper, Patricia Clarkson and Alessandro Nivola have all joined the West End run. The play is based on the short life of severely deformed Joseph Merrick in Victorian London.

Alessandro plays the celebrated surgeon Dr Frederick Treves who saves Merrick form living in freak shows and takes him to a private London hospital for ‘rehabilitation’.

“In this version it is Treves to whom we look for emotional complexity. And Nivola delivers it beautifully,” writes Ben Brantley in the New York Times.

Alessandro, Bradley and Patricia have all all been nominated for Tony Awards in next month’s ceremony. I met Alessandro as he was tanking a break from final rehearsal at the Theatre Royal.

He saw the sketch and said “heeeeeeyyyy… nice sketch”. I asked him if they were goring back to New York for the Tony Awards which are on Sunday 7 June and he said they we were.

The 2014 Broadway revival of THE ELEPHANT MAN opened at the Booth Theatre for a 13 week run with Bradley Cooper in the title role, transferring to London’s  Theatre Royal Haymarket this year until early August. The production also featured Patricia Clarkson and Alessandro Nivola also in the lead roles. All three have received Tony nominations for next month’s  Awards ceremony.

Written by American playwright Bernard Pomerance  in 1977, it is based on the real-life story of Joseph (‘John’ in the play) Merrick, a grotesquely deformed young man, who was a freak show attraction in the 19th Century. He is rescued from the squalor by Frederick Treves, a renowned surgeon who offers him shelter and comfort for his short life in a private London hospital.

Patricia’s impressive credentials have made her a very much demand character actor, including diverse roles in THE GREEN MILE (1999), THE STATION AGENT (2003), VICKY CHRISTINA BARCELONA (2009) and PIECES OF APRIL (2003) for which she received an Oscar and a Golden Globe nomination. On the small screen she won two Emmy Awards for her recurring guest role as the free-spirited  Sarah O’Connor in the TV series SIX FEET UNDER.

I meet Patricia at the Theatre Royal Haymarket’s stage door after the opening performance  on 19 May, where she signed and dedicated my sketch. 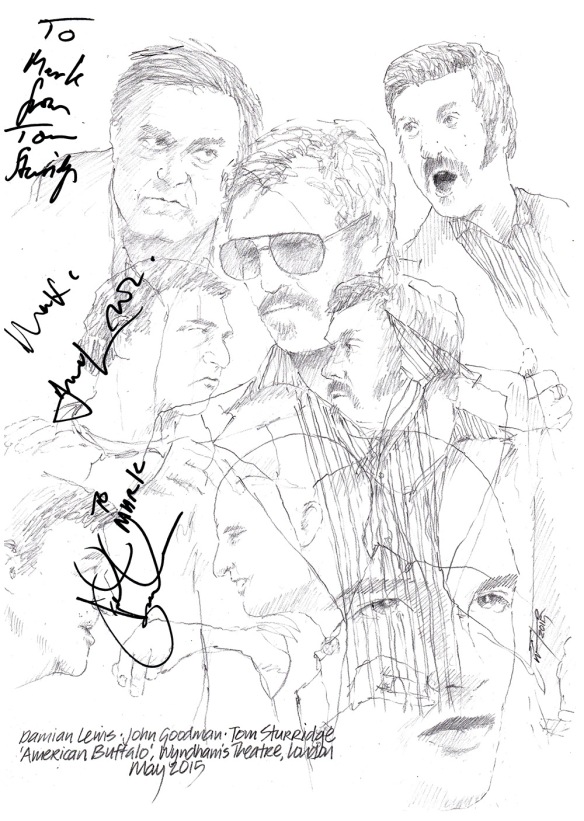 Damian, John and Tom had signed a portrait drawing I did of them after the opening night’s performance. This sketch is more of a character montage, which they also signed for me this week.

Brilliant American soprano Georgia Jarman made her Royal Opera debut as Roxana in Karol Szymanowski’s masterpiece Król Roger (King Roger) which finished this week. Kasper Holten’s “devastating” production was the first time in almost 40 years that the 1926 Polish opera was on a London stage.

A mysterious shepherd is brought before 12th century King Roger of Sicily. The church officials want him punished for his pagan preaching of love and pleasure but Roger’s Queen Roxana has converted and pleads with her husband to let the shepherd speak. Things fall apart from that point, as the charismatic stranger gains power.

“The singing – notably by Kwiecien, Jarman and Pirgu – is superb” wrote Michael Church in The Independent.

The excellent staff at the Royal Opera House managed to get my sketch to Georgia on the final night, which she signed and added a kind dedication. 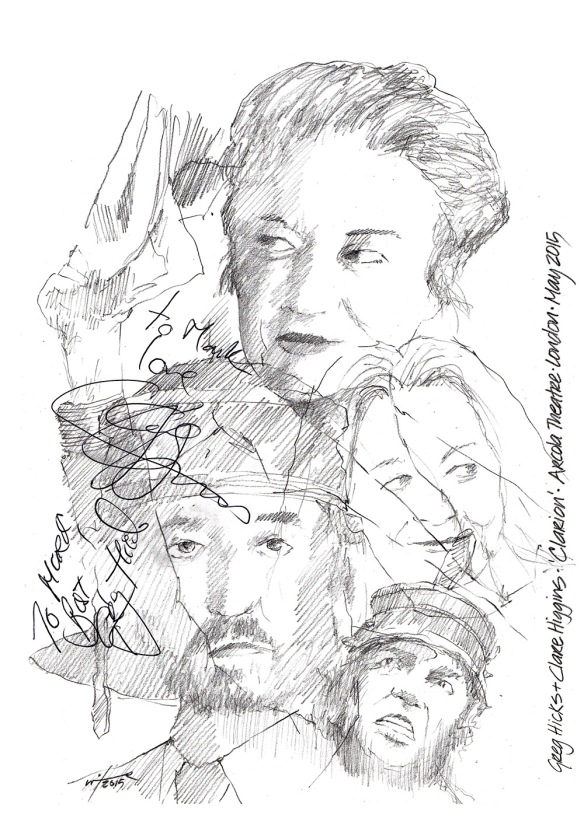 Multi-award winning actress Clare Higgins recently returned from her completed Broadway run of A Delicate Balance to star in the world premiere of former journo Mark Jagasia’s debut play Clarion for a five week run at the Arcola Theatre in East London.

It’s a dark comedy about British media, set in the offices of Britain’s worst newspaper, The Daily Clarion, a toxic tabloid that specialises in sustained anti-immigrant rhetoric.

Greg plays the Clarion’s egomaniacal editor Morris Honeyspoon who spends his weekends dressed as Julius Caesar and Clare is washed up foreign correspondent Verity Stokes, a Fleet Street legend who is, as Michael Billington describes, “less well-preserved than constantly pickled”. He writes, “Jagasia has created a genuine modern monster scorchingly embodied by Hicks”.

Clare said in an interview for The Evening Standard, “it’s a necessary play. It describes what is going on in the underbelly of the pages we flip through every morning. Not only did it make me laugh, it made me think.”

The Arcola Theatre is a studio theatre in Dalston, in the London borough of Hackney. It features two studios seating up to 240 and two rehearsal rooms. It describes itself as “locally engaged and internationally minded” staging a diverse programme of plays, operas and musicals. It also runs a number of community arts activities, including youth drama and a writers programme. TimeOut call it “an undisputed powerhouse,” and the Stage said “the Arcola is one of the great success stories of British theatre” and what’s more their extremely friendly and helpful staff passed my sketch on to Clare and Greg to sign for me.

What would it be like to work in Barbara Streisand‘s personal shopping mall in the basement of her Malibu mansion? That is the subject of American actor Michael Urie’s one man show Buyer and Cellar, which just completed a run at London’s Menier Chocolate Factory, transferring from New York.

From that one quirky but true premise, New York playwright Jonathan Tolins has created an outrageously funny monologue about Alex More – the sole employee in the music legend’s private collections of antiques, clothes, and toys presented in various boutiques… a “dream refuge”.

Alex is “hired to work in the in the mall and describes his journey from mock merchant to Gypsy acting coach via a ‘religious ecstasy’ in front of the  ‘people dress’ through short sharp and wonderfully witty vignettes” describes Ben Hewis in his four star WhatsOnStage review.

Michael portrays every character from the eccentric and authoritative diva herself to her hubby James Brolin and Alex’s head tossing, vindictive boyfriend, Barry.

The New York Times called it “a delicious target for satire… a featherweight but irresistible play about celebrity false bonding, the solitude of uber-fame and the seductive allure of expensive chintz.”

I interrupted Michael as he was pressing the entry code at the Chocolate Factory’s stage door on the final day of his London season. He didn’t mind the interruption and loved the sketch… as you can see by the dedication, before he went out to work in “Babs basement’.