Culinary star Clare Smyth, the first British female chef to hold and retain three Michelin Stars, has just been named the Best Female Chef on the planet by the World’s Best 50 Restaurants judges. It’s an accolade she found a little ‘strange’ given that she has competed on a level playing field with men since the beginning of her career.

“Separating male and female chefs for me is strange, but there’s not enough women coming through at the top so we need to do something about it,” she said in an Independent interview. In 2002 she joined Restaurant Gordon Ramsey in London, running it for 13 years, before opening her debut establishment, CORE BY CLARE SMYTH in Notting Hill last summer, with the philosophy, ‘artisanal flair and sustainable ethos.’ It won the Best Restaurant at the GQ Food and Wine Awards this week.

I actually meet the friendly and laid back Clare, when she was one of the judges for the UK Young Chef Awards held at Harrods in 2015 and I was masquerading as a photographer with a food fetish. I did do a sketch of her but never got it signed so sent this quick one to her at CORE, and she duly obliged.

A confession: she signed in pencil and corrected my misspelling of her first name, which I have subsequently sorted for this post. Spelling was always a truant in my education. 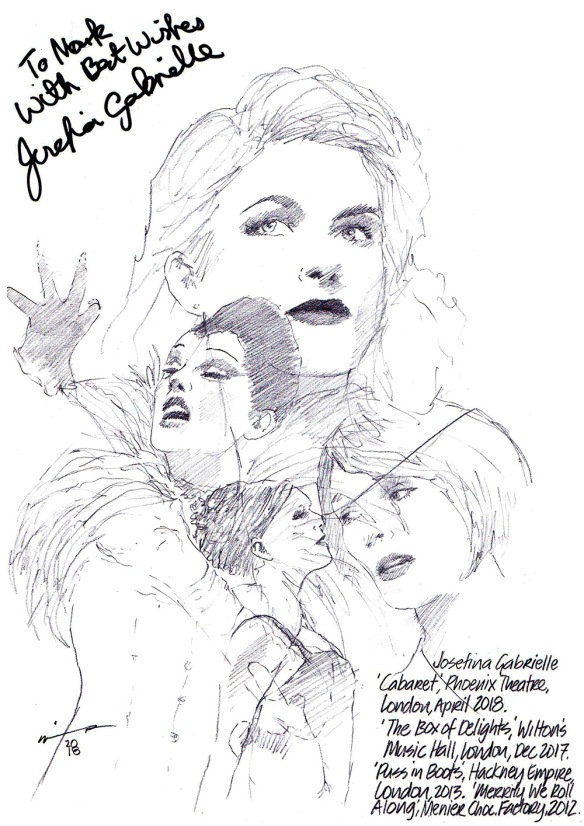 Josefina Gabrielle is very familiar with CHICAGO, the musical not the city, although I could be misrepresenting her knowledge of American metropolises. The British musical theatre star has returned to the show, this time as Velma Kelly, after playing Roxie Hart in the two previous London productions at the Cambridge and Adelphi Theatres. With three Olivier Award nominations for OKLAHOMA, SWEET CHARITY and MERRILY WE ROLL ALONG, Josephina’s musical pedigree is assured.

I drew this montage of her in CHICAGO, as the Evil Witch Evilena in the Hackney Empire’s 2013 panto PUSS AND BOOTS, her dual roles as NIckie and Ursula in the stage adaption of John Masefield’s 1935 children’s book, THE BOX OF DELIGHTS at Wilton’s Music Hall in the East End and her Oliver-nominated performance as Gussie Carnegie in the Menier Chocolate Factory’s 2014 production of MERRILY WE ROLL ALONG.

She signed it for me at the Phoenix Theatre stage door when she arrived for the CHICAGO matinee.

Throughout the summer of 2014, the superb BAFTA-winning and double Olivier nominated actress Helen McCrory played the title role in the National Theatre’s production of Euripides’s MEDEA on the Olivier stage.

It’s one of the most terrifying characters in Ancient Greek tragedy – a sorceress who kills her own children – and it requires, if you will forgive me, a killer performance’, one which Telegraph critic Charles Spencer called Helen’s “performance of her career.”

Helen of course is no stranger to playing screen villains, her most notable being Narcissa Malloy in the final three HARRY POTTER films. For her role as MEDEA she won the Critics Circle Theatre award for Best Actress.

I left this drawing at the National for Helen to sign which she did and returned it to me with a note saying ‘what beautiful sketches.’

“Audiences may come to this production drawn by the star power of Suranne Jones, but will leave talking about Jason Watkins,” wrote David Butcher in his Radio Times review of FROZEN, which has been running at London’s Theatre Royal Haymarket since February.

“His performance as Ralph, a serial killer and paedophile, who abducts children is strikingly sinister, a creepy tour de force”.

Suranne plays Nancy, a mother of a murdered daughter, killed by Jason’s character. Both actors were kept apart for most of the rehearsals to make the moment when they ‘collide’ on stage as ‘powerful’ as possible said director Jonathan Munby.

When you meet the BAFTA-winning Jason he is the complete opposite, one of the nicest people stalking the London boards, obviously not a method actor. He was more than happy to sign my drawing at the stage door a few weeks ago.

Continuing my series of writer sketches is prolific English playwright Simon Stephens. After giving up school teaching, Simon’s theatre career started at the Royal Court Theatre in London where he taught the Young Writers’ Programme for many years. He is now its Associate Playwright as well as Artistic Associate at the Lyric Hammersmith and the inaugural Associate Playwright at the Steep Theatre Company in Chicago… just busy enough.

Winner of numerous accolades, his most notable is the Best New Play Olivier Award in 2006 for ON THE SHORE OF THE WIDE WORLD. Simon’s adaption of Mark Haddon’s novel THE CURIOUS INCIDENT OF THE DOG IN THE NIGHT-TIME won the 2013 Best New Play Olivier, one of a record seven the production collected.

The highly acclaimed story surrounding the mystery of the death of a neighbour’s dog investigated by Christopher Boone who has an autistic spectrum condition. The play opened at the National Theatre in August 2012 before transferring to the Apollo in London’s West End the following year. The production halted when the theatre’s ceiling collapsed on 19 December and reopened next door at the Gielgud Theatre in July 2014, completing the run in June last year.

The Broadway production debuted in October 2014 at the Ethel Barrymore Theatre, winning the Best New Play Tony Award. I sent my sketch of Simon to his London agent and it quickly came back signed and dedicated.

Cuba Gooding Jr’s portrayal of the arrogant, yet charismatic football player Rod Tidwell in Cameron Crowe’s blockbuster sports comedy JERRY MAGUIRE won him the Best Supporting Actor Oscar in 1996. This breakthrough role originated the famous phrase,”Show me the money!” that still resonates today. This month he made his West End stage debut as the hotshot lawyer Billy Flynn in the 21st Anniversary revival of the musical CHICAGO at the Phoenix Theatre.

After being told by security that Cuba was resting between the matinee and evening performances last Saturday, he suddenly appeared at the stage door in his dressing gown to meet the surprised fans. When I asked him to to sign my sketch ‘To Mark’ he said “Oh Mark that’s my middle name, did you know that? I didn’t but I do know so I was confident he could spell it on the dedication.

Kevin Kline collected his third Tony Award for last year’s Broadway revival of Noel Coward’s classic comedy PRESENT LAUGHTER at the St James Theatre. His previous successes were in the 1978 original production of ONTHE TWENTIETH CENTURY and in the 1981 revival of THE PIRATES OF PENZANCE.

With an Academy Award for his supporting role in A FISH CALLED WANDA, five Golden Globe, two Emmy and BAFTA nominations, he is no stranger to the Awards circuit. I did this quick montage of Kevin, incorporating him as the ageing matinee idol Garry Essendine in PRESENT LAUGHTER, the fat knight Falstaff in HENRY IV and the title role in CYRANO DE BERGERAC, the talented cadet with the enlarged proboscis and sent it to him at the St James Theatre last May. It took a while to come back, but well worth the wait.

New Zealand’s Ivan Mauger, regarded as the world’s greatest speedway rider died today at the age of 78. The Christchurch-born Ivan, who won a record six individual World Championships was voted the ‘Greatest Speedway Rider of the 20th Century.’ He was also runner-up three times. In all the speedway ace won 15 world titles, mostly in the 1970’s along with countless other events and enjoyed International celebrity status.

I can’t remember when or where Ivan signed this biro sketch for me, but I have a feeling it may have been in Wellington in 1990 when he was the inaugural inductee into the NZ Hall of Fame. RIP Ivan.

Jack’s stage pedigree includes originating the role of Richard Roma in the 1983 London production of GLENGARRY GLEN ROSS, which won him Best Actor at the Society of West End Theatre Awards, later known as the Oliviers.

Jack signed my sketch at the Playhouse Theatre stage door as he arrived for a Saturday matinee a few weeks ago. 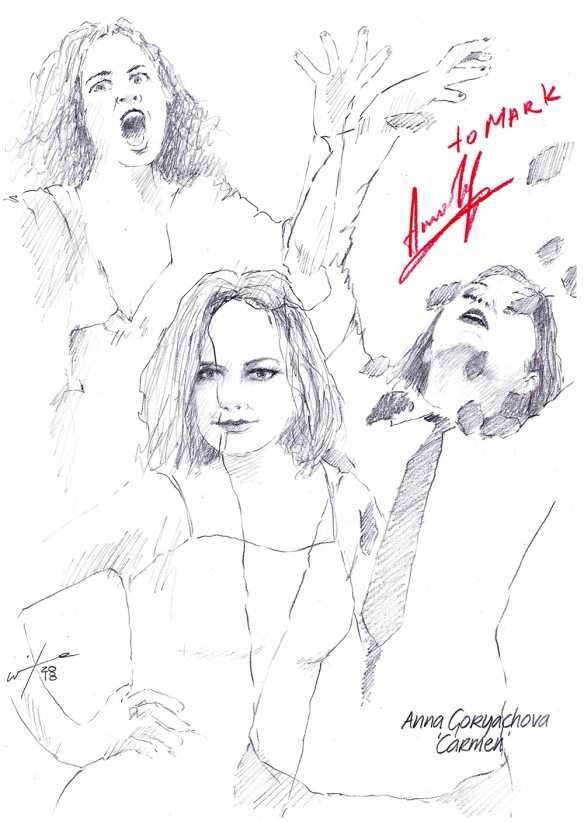 Russian mezzo-soprano Anna Goryachova made her Royal Opera debut earlier this year in the title role of Barrie Kosky’s ‘daringly dark’ new production of CARMEN. She shared the role with fellow debutant Gaelle Arquez. The 34 year-old native of St Petersburg began her opera career in her hometown’s Chamber Opera and has been a popular performer throughout Europe and Scandinavia since.

She had previously performed the role of CARMEN at Belgium’s Opera Vlaanderen and Teato Real in Madrid. In London the production broke with convention, resembling more the dazzle-dazzle of Vaudeville. Anna signed my drawing, which I left for her at the Royal Opera House stage door, with a vivid red crayon and returned it to me along with a very nice thank you note.