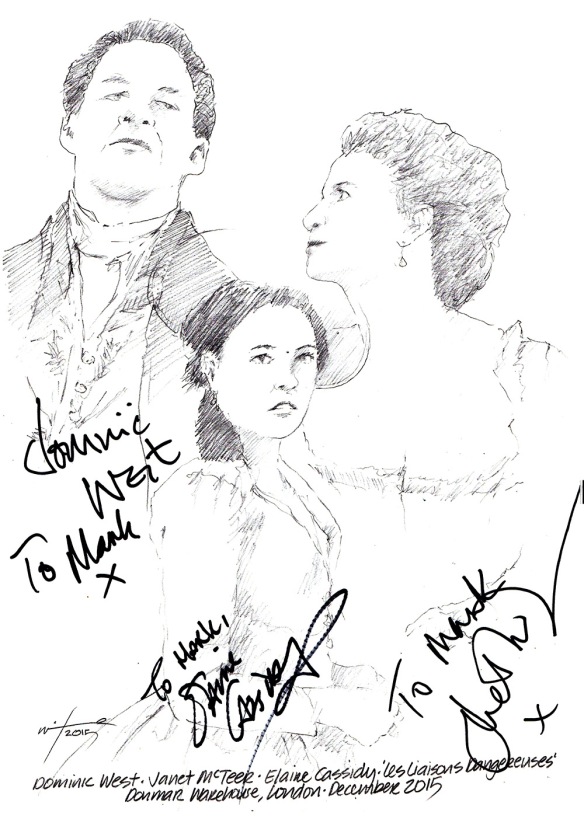 Two hundred years after Pierre Choderlos de Laclos’ sizzling and scandalous epistolary novel LES LIAISONS DANGEREUSES slipped into pre-Revolutionary France, Christopher Hamption’s lauded and awarded adaption for both stage and screen appeared, collecting an Oscar, BAFTA and an Olivier Award in the process.  It’s the tale of sex, intrigue and betrayal between two jealously-fuelled aristocrats (and ex-lovers), the Marquisede Merteuil and the Vicomte de Valmont use of seduction to degrade and humiliate others, in this case  the virtuous and beautiful Madame de Tourvel. Critic, Dominic Cavendish summed -up the plot in The Telegraph “The destruction of purity and innocence, the cynical pursuit of pleasure at the expense of others’ pain, vice unbounded, yet kept within the impressive mask of civilised decorum.”

The Independent’s veteran critic Paul Taylor wrote Dominic’s Valmont is a “seductive sociopath and erotomane who uses strategy as foreplay with a hotline between increasingly active brain and insatiable genitals” He describes Janet as  “drop-dead striking …(who)  insinuates and machinates in a  breathy, mocking manner, her eyes a-glare with sinisterly circumspection and latent with injury”, and Elaine “superbly communicates a state of growing feverish chastity.” 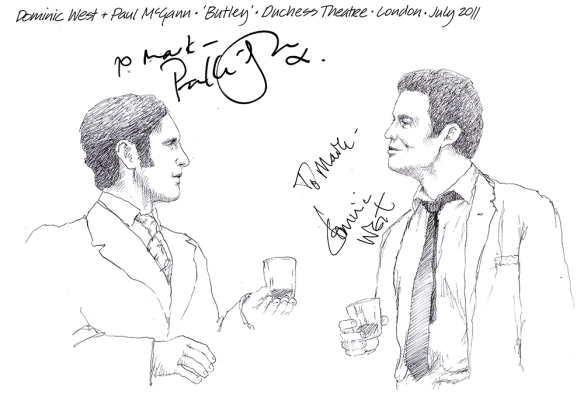 Paul McGann starred alongside Dominic West in the revival of Simon Gray’s biting comedy Butley in the summer of 2011 at London’s Duchess Theatre after a gap of 40 years. Dominic took on the iconic title role of the boozing and abusing rapier-tongued uni lecturer Ben Butley, well-bent on self-destruction and Paul played Reg Nuttall, the eloquent, steely new to Yorkshire lover of Butley’s housemate Joey. The play premiered in 1971 in Harold Pinter’s award-winning production starring Alan Bates at the Criterion Theatre in London and was described as a ‘darkly comic assault on the soft underbelly of academia’. 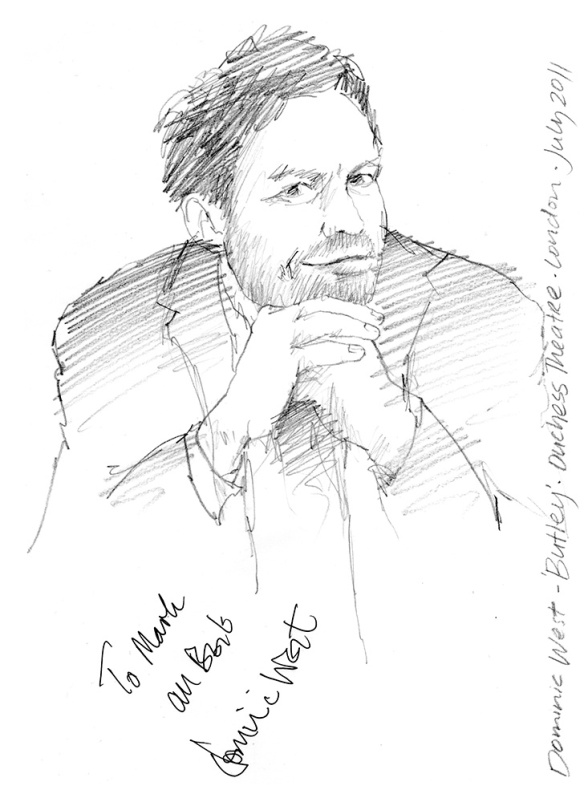 In December last year British actor Dominic West and Prince Harry were part of three teams competing to reach the South Pole first on the trek to raise money for the charity Walking with the Wounded. The competition part of the race was cancelled due to hazardous weather conditions, so the teams combined forces to successfully reach the pole.

He is nominated for a TV BAFTA for his role as Richard Burton in Burton & Taylor. Helena Bonham Carter, who played Elizabeth Taylor, is also nominated.

In June 2011 Dominic took the title role in Simon Gray’s classic comedy Butley at the Duchess Theatre in London. Dominic is always great with ‘graphers and was more than happy to sign this rapid 4b pencil sketch at the stage door on the way in for a July Saturday matinee performance which I saw.