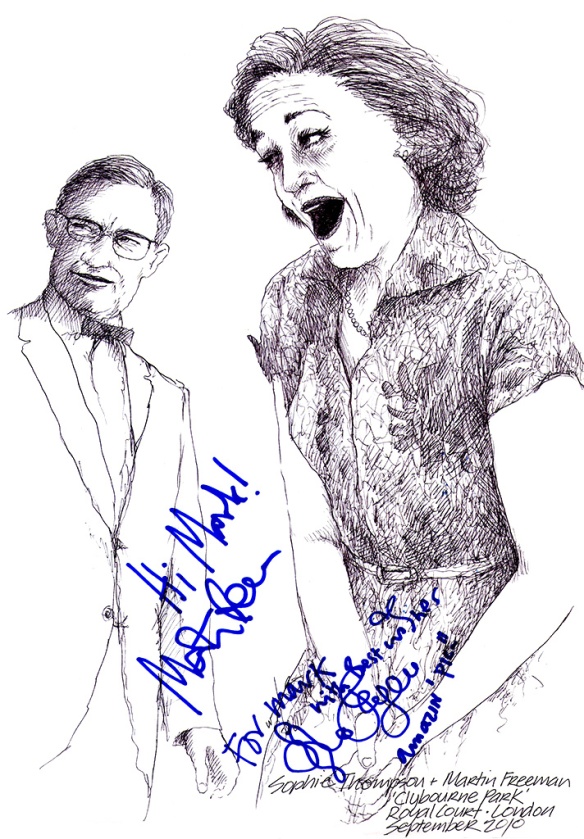 Clybourne Park was written by Bruce Norris in 2010 and received its UK premiere at the Royal Court Theatre in London, directed by Dominic Cooke and featuring Martin Freeman and Sophie Thompson.

It explores the fault line between race and property. In the first half it’s 1959, Russ and Bev are selling their desirable two bed home at a low price. This enables the first black family to move into the neighbourhood causing ripples of discontent amongst the cosy white urbanites of Clybourne Park. In the second half it’s 2009, the same property  is being bought by Lindsey and Steve, whose plan to raze the house and start again is met with a similar response.

It won the 2011 Pulitzer Prize for Drama and the Tony and Oliver for Best New Play.

Martin (Russ) signed my sketch at the British Independent Film Awards at the Old Billingsgate Fish Market and Sophie signed at the Wyndham’s Theatre stage door after it transferred in 2011, without Martin and Steffan Rhodri. 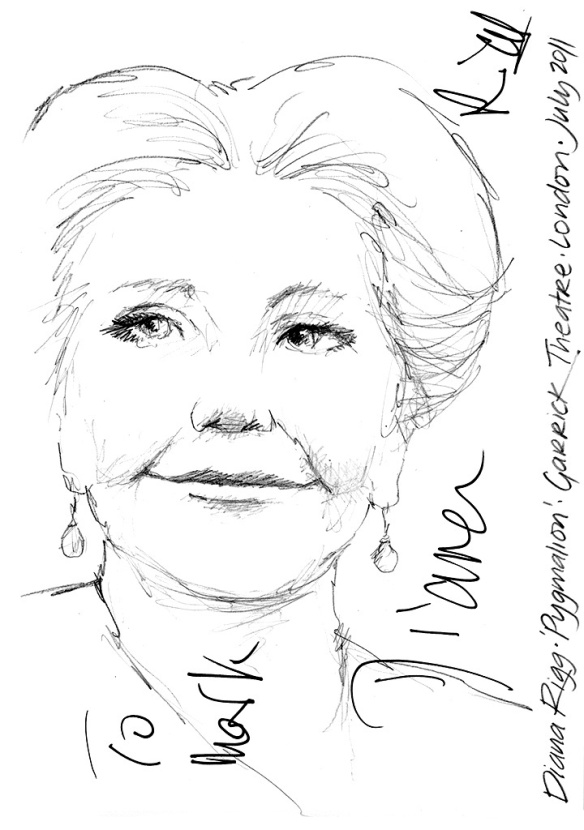 Sixties icon Dame Enid Diana Elizabeth Rigg is best known as Emma Peel in the TV series The Avengers and Countess Teresa di Vicenzo in the 1969 James Bond film On Her Majesty’s Secret Service. She has won a BAFTA (1990), and Emmy (1997), and a Tony Award for her role in Medea on Broadway in 1994. 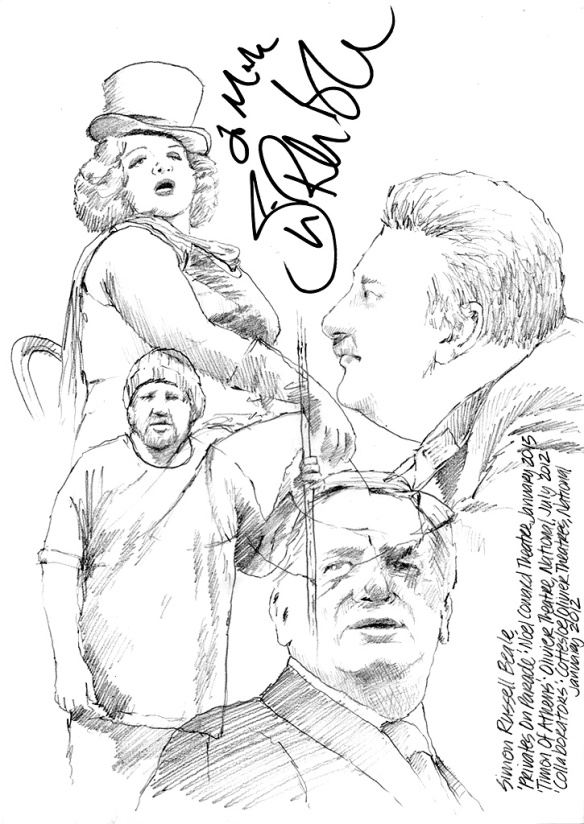 Described by The Independent as ‘the greatest stage actor of his generation,’ Simon Russell Beale is one of the most popular and critically acclaimed talents in British theatre. He performs under his full name, as there was already a Simon Beale registered when he joined Equity. Winner of three Olivier Awards (1996, 2000, 2002) and two TV BAFTAs, Simon was also nominated for a Tony in 2004 for a revival of Tom Stoppard’s Jumpers on Broadway.

In October 2011 he returned to The National in London to star as Joseph Stalin in the premiere of Collaborators for which he won Best Actor at the 2012 Evening Standard Awards. He played the title role in Timon of Athens from July to October 2012 before taking on the role of Captain Terri Dennis in Privates on Parade – the first play in Michael Gradage’s new West End season at the Noël Coward Theatre from December 2012 to March 2013.

In January next year he will play King Lear at the National, directed by Sam Mendes.

Simon signed my sketch at the stage door of the Noël Coward Theatre in early 2013. 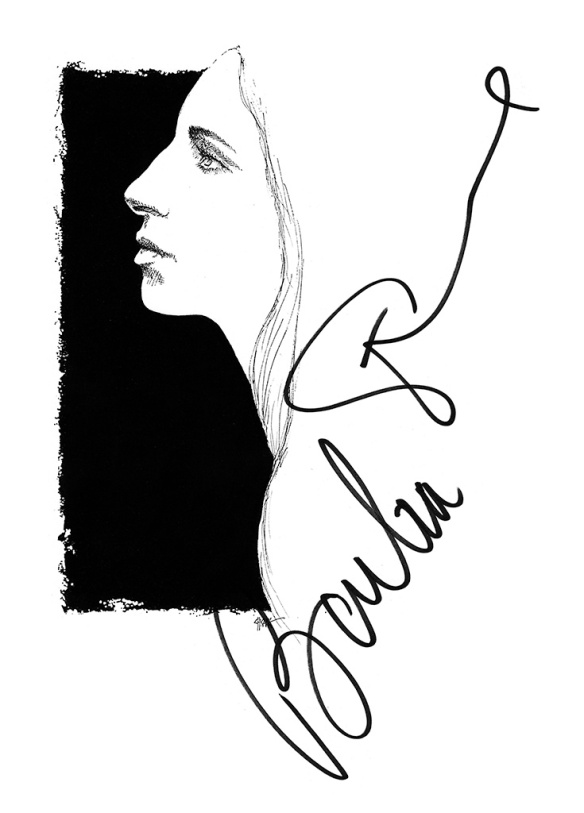 One of the most commercially and critically successful entertainers, Barbra Joan Streisand holds the record for the most top ten albums of any female recording artist – a total of 32 since 1963.

The 71 year old has won two Academy Awards, eight Grammys, five Emmys, and a Special Tony Award. She signed my sketch at a recording session in New York in the late 1980s. 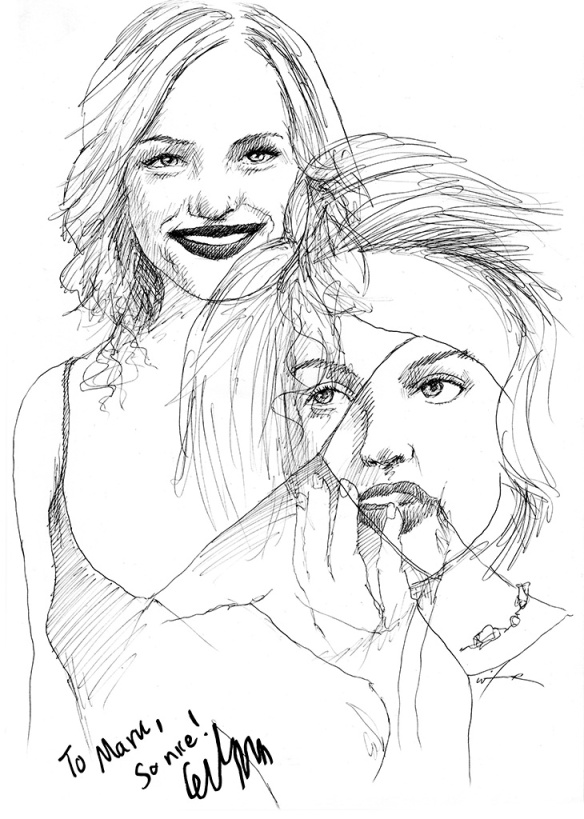 Elisabeth Moss made her West End debut as Martha Dobie in Lillian Hellman’s play The Children’s Hour, which opened at the Comedy Theatre in London on 02 January 2011.

At this week’s Emmy Awards she received two leading actress nominations – one for her role as secretary-turned-copywriter Peggy Olsen on the series Mad Men and the other playing detective Robin Griffin in the miniseries Top of the Lake, written and directed by Oscar winner Jane Campion.

Elisabeth signed my sketch at the Comedy Theatre in February 2011. 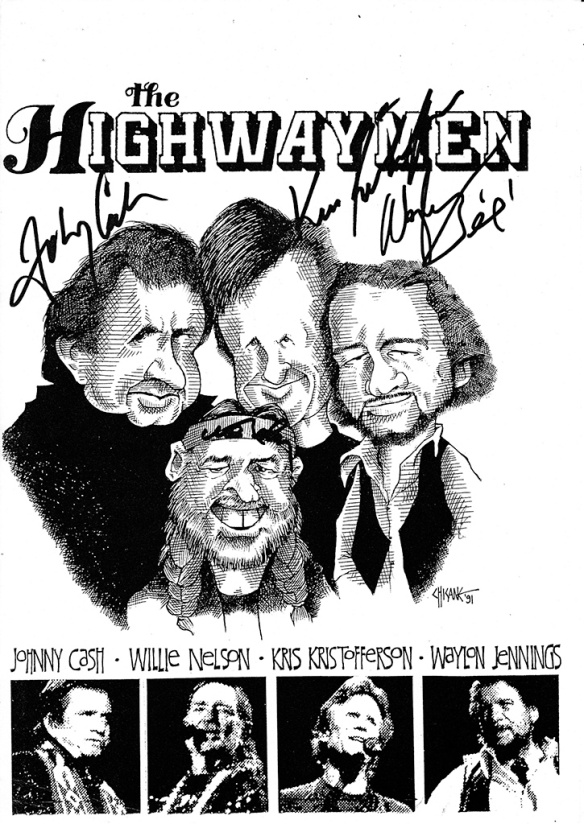 Johnny Cash, Waylon Jennings, Willie Nelson, and Kris Kristofferson toured New Zealand as The Highwaymen in 1991. Playing three city gigs, I saw Johnny in his hotel cafe in Wellington and asked him if he would sign my caricatures and possibly get the others to do the same. He was more than happy to do so.

A few days later the signed sketch was mailed back to me – fully ‘graphed. 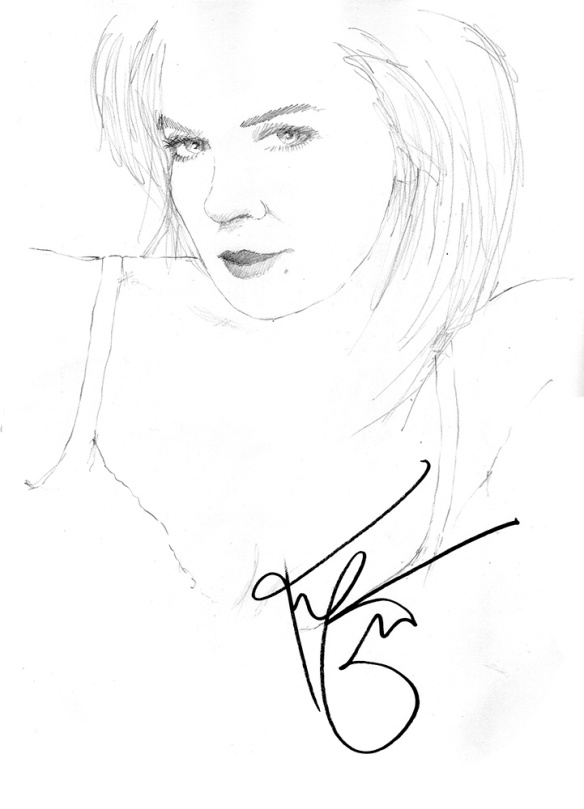 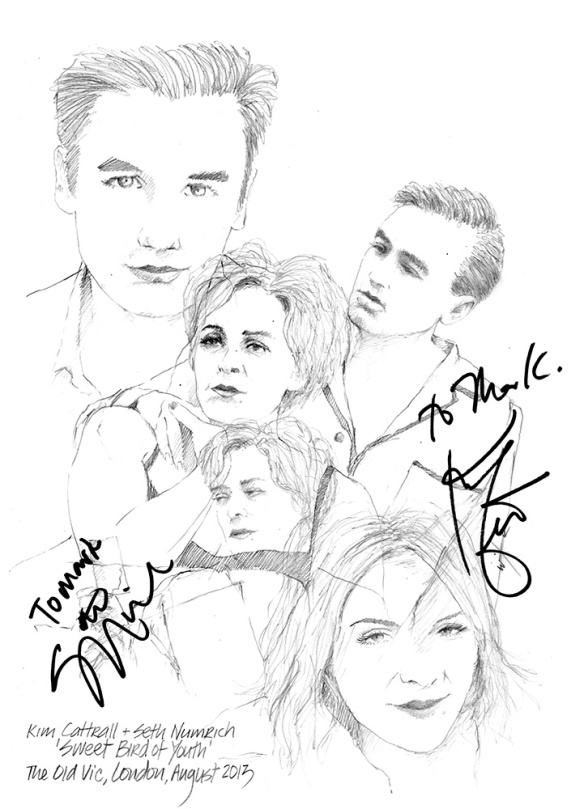 Kim Cattrall and Seth Numrich starred in Tennessee Williams’ revival of Sweet Bird of Youth at the Old Vic this year. Both Kim and Seth signed my sketch at the theatre in August. 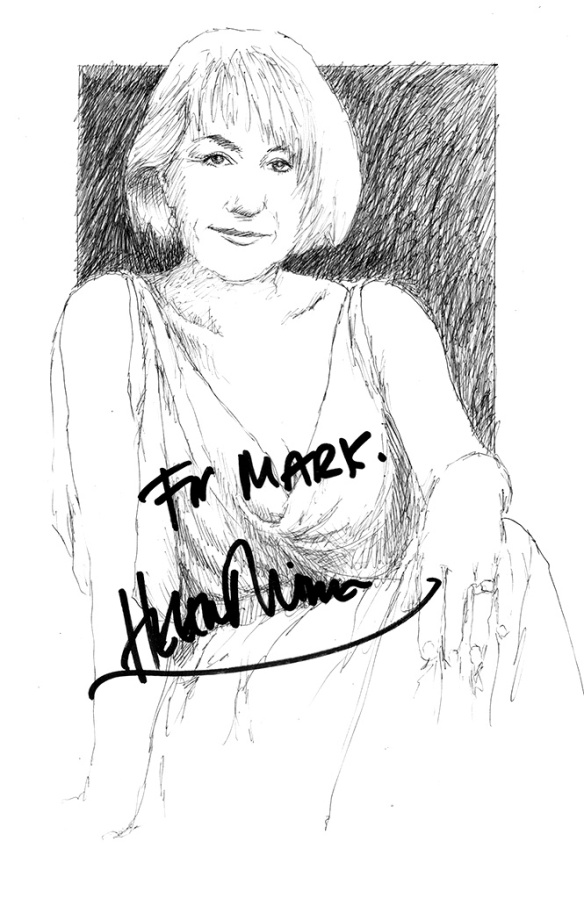 Dame Helen Mirren is a great signer. Depending on the usual equation – the demand divided by the time allocation – she either signs her quickies, which are “H Mirren”, or, if you’re lucky, you get the full “Helen Mirren”.

Over the years she has signed a number of my sketches. On this occasion it was the European Premiere of Graham Greene’s classic crime thriller Brighton Rock at the Odeon West End in February 2011.

My previous drawing of Helen Mirren in theatre as the Queen is here.

Many years ago I started designing Christmas cards. Sometimes I sell a few.

These are a few examples:

‘Tis The Season To Eat Polly Christmas Card by ChicaneCartoon

Rebel With A Claus Christmas Card by ChicaneCartoon

To see the full set check out my Christmas cards page here. 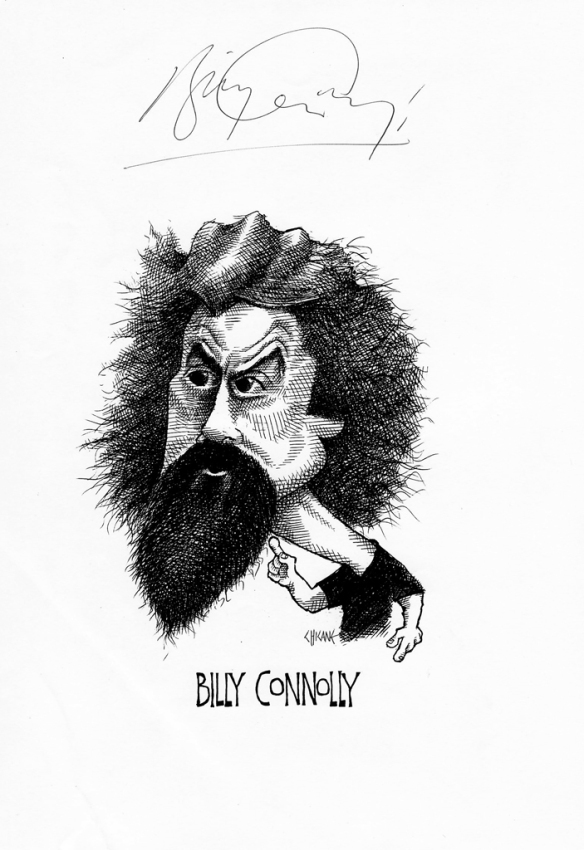 Billy Connolly has made numerous trips to New Zealand, with sell out stand up shows, recorded a TV series entitled A World Tour of New Zealand and roles in films such as The Last Samurai, and a dwarf in The Hobbit series. In spite of recent cancer surgery and being treated for the early stages of Parkinson’s disease, Billy plans to undertake an extensive theatrical tour of the country next year.

I drew this caricature in the early 90’s which he signed after one of his shows. See my previous Billy Connolly post here.