“It’s been a long time since a singer has generated as much buzz as the Norwegian soprano,” wrote the renowned Gramophone magazine in their review of Lise Davidsen’s self-titled debut album of Strauss and Wagner songs late last year. “A name you will want to remember and a voice, once heard, you won’t forget.” She is the first operatic soprano to debut at No 1 in the UK Classical Charts. “This album only reinforces the fact that she is one of the greatest vocal talents to have emerged in recent years, if not decades,” continued the Gramophone review, who awarded her Young Artist of the Year in 2018.

The Financial Times declared her ‘the real deal’. It was not alone with the Scandinavian lyric dramatic soprano gaining universal adoration and agreement that she ‘one of the greatest voices of her generation’.

Lise shot to prominence in the summer of 2015, winning the Queen Sonia Singing Competition in her homeland, before she ‘swept the board’, collecting the three top awards at the prestigious Operalia competition in London as well as being a triple winner at Amsterdam’s Hans Gabor Belvedere Singing contest. A series of acclaimed international Opera followed. Last year she debuted with the Metropolitan Opera in New York as the young, rich lover Lisa, in Tchaikovsky’s THE QUEEN OF SPADES, with the New York Time’s Zachary Woolf writing, ” Ms Davidsen’s voice is creamy in texture, but with a silvery shimmer that gives it a penetrating spine.” Her first appearance at the Royal Opera House was in Wagner RING CYCLE in 2018, returning this year alongside Jonas Kaufmann as the free-loving, cross-dressing, husband-rescuing heroine Lenore in Beethoven’s FIDELIO. The production sold out within 24 hours.

In his Backtrack review David Karlin wrote, “Covent Garden has seen many great role debuts over the years, but I doubt there have been many with quite the level of self-assurance.” Unfortunately the season was cut short due to the Covid-19 pandemic, which included a live screening to cinemas of the final performance on 17 March. Fortunately I managed to get Lise to sign my drawing of her in the Met role before the lockdown. 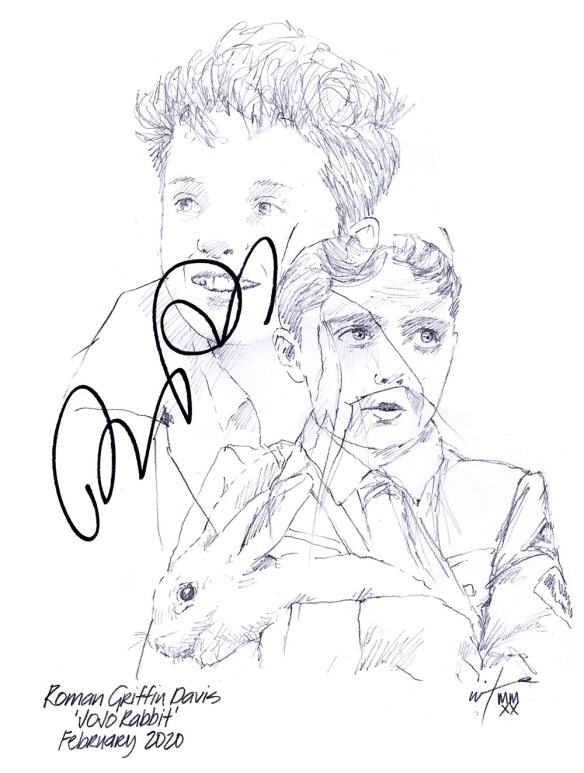 One of the breakout film performances of 2019 was Roman Griffin Davis’ impressive acting debut as the twelve year old Hitler Youth member with his imaginary friend Adolf, Johannes ‘Jojo’ Betzler in Tamika Waititi’s Oscar-winning JOJO RABBIT. He received six award nominations, including a Golden Globe, a Screen Actors Guild and a Critic’s Choice Award which he won. Roman’s twin brothers, Gilby and Hardly also featured in the dark comedy as Hitler Youth clones.

His follow up film is the festive-themed dark romance about an extended family gathering, SILENT NIGHT (working title) opposite Keira Knightley, written and directed by his mother, Camille Griffin. It’s been described as LOVE ACTUALLY with a killer sting. Filming started in February, and managed to finish ‘by the skin of their teeth’ before the coronavirus-induced lockdown.

Roman signed my drawing at the Soho Hotel in London as he left to attend the BAFTA Awards at the Royal Albert Hall in February. 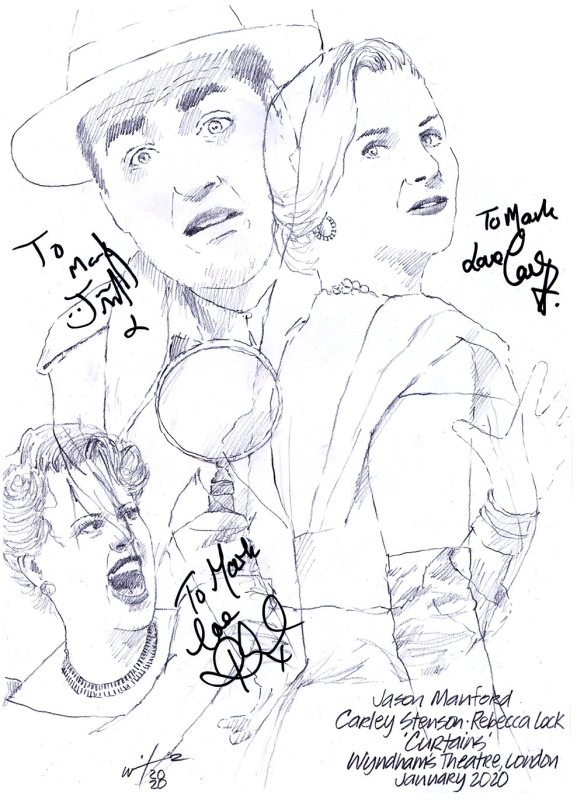 Kander and Ebb’s charming musical mystery comedy caper CURTAINS opened on Broadway at the Al Hirschfield Theatre in the spring of 2007 starring David Hyde Pierce as Lieutenant Frank Cioffi. Described as the ‘fun companion’ to the duos CHICAGO and CABARET, this classic whodunnit was nominated for eight Tony Awards with David winning for Leading Actor in a Musical.

The UK production, featuring comedian-singer Jason Manford in the lead role, premiered at Bromley’s Churchill Theatre last year, beginning a nationwide tour that included a belated but brief, unexpected five-week festive season filler at the Wyndham’s Theatre in London’s West End, due to the early closing of THE MAN IN THE WHITE SUITE.

Set in Boston in the 1950’s, the Broadway-bound musical ROBBIN’ HOOD OF THE OLD WEST is flopping, when its untalented star, Jessica Crenshaw is murdered during her opening night curtain call. Homicide cop and show tune-obsessed Frank is brought in to solve the case. Jason was joined by Carley Stenson as the show’s composer Georgina Hendricks, who replaces Jessica as the leading lady and Rebecca Lock as the brassy co-producer Carmen Bernstein.

The continuing UK tour was cancelled last month during its run at the Haymarket Theatre in Leicester due to the coronavirus pandemic. A recorded version streamed last week with profits going to the Funds For Freelancers charity.

Jason, Carley and Rebecca signed my montage sketch at the Wyndham’s Stage door in early January. 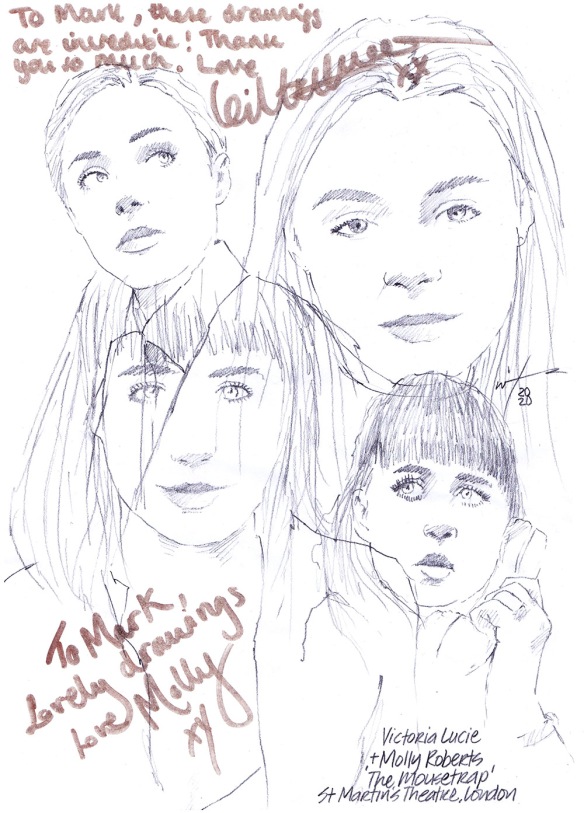 The world’s longest continuously running play for the past 68 years, Agatha Christie’s THE MOUSTRAP in London’s West End has finally ended its ‘initial’ run. On March 16 this year, when the British Prime Minister issued a statement in response to the Covid-19 pandemic advising people to avoid gathering in theatres, cinemas, bars and restaurants, the producers appropriately ‘suspended’ all performances until 30 June at the earliest. All theatre’s are now dark until further notice after the lockdown was formalised a week later.

The timeless tale of ‘whodunnit’ by the ‘Queen of mystery’, involving a small group of people who gather at Monkswell Manor, where a murder takes place during a blizzard, opened at the Ambassadors Theatre on 25 November 1952, running until Saturday 23 March 1974, before transferring next door to St Martin’s on the Monday. It has become a West End staple ever since.

One of my recent routines is to draw the actresses playing the strange and aloof Miss Casewell and the Manor’s co-proprietor, Mollie Ralston after each cast change – in this case, Victoria Lucie and Mollie Roberts respectfully, who now have the distinction of being part of final cast of THE MOUSETRAP’s ‘initial’ run. Victoria is making her West End debut and has just finished a TV pilot for NOIR-MAN. Mollie is the Artistic Director for Poleroid Theatre and is a regular on stage and screen, receiving multiple Off West End Award nominations.

Both signed my sketch prior to the lockdown.

Milos Forman’s 1975 film adaption of Ken Kesey’s 1962 novel ONE FLEW OVER THE CUCKOO’S NEST is regarded as one of the greatest American films of all time, and a personal favourite of mine. It won the ‘Big Five Academy Awards’, Best Picture, Best Director, Best Actor, Best Actress and Best Adapted Screenplay.

Set in an Oregon psychiatric hospital, it centres on the rebellious and free-spirited con-man, Randle McMurphy, who is transferred from a prison work farm. Louise Fletcher collected the Oscar for her portrayal of his nemesis, the tyrannical and stereotypical ‘battle-axe’ head nurse Ratched. In her acceptance speech she thanked her deaf parents in sign language.

Nurse Ratched was named as the fifth greatest villain in film history and the second greatest villainess behind the Wicked Witch of the West in THE WIZARD OF OZ by the American Film Institute. In an interview Louise said that Ratched’s 1940’s hairstyle was “a symbol that life stopped for her a long time ago.” Louise also won the BAFTA and a Golden Globe Award.

I sent Louise this sketch to her Los Angeles agency, which she kindly signed and posted back last week.

Veteran Australian actor Hugo Weaving returned to the London stage last month in the National Theatre’s production of Fredrich Durrenmatt’s visionary 1956 revenge play THE VISIT or THE OLD LADY COMES TO CALL, directed by Jeremy Herrin. Adapted by Tony Kushner and set in mid-twentieth century, in Slurry, a poverty-stricken industrial town in Western, New York where billionaire heiress Claire Zachanassian returns after leaving 45 years earlier as a pregnant 16 year-old to seek revenge on her former lover Alfred Ill, who dumped her back then. The locals hope her arrival signals a change in their fortunes, but they soon realise that prosperity will only come at a terrible price. Hugo played Alfred and Lesley Melville was Claire.

The production unfortunately was cancelled in mid-March due to the coronavirus pandemic, but Hugo signed and returned my drawing of him as Alfred I left at the National’s stage door before final curtain.