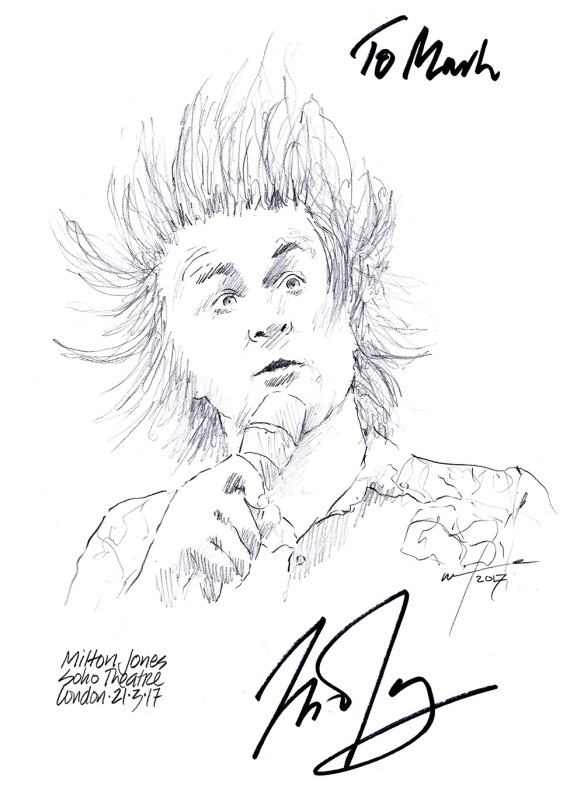 Milton Jones? “Oh that’s the bloke with the shirts and sticky-up hair,” most people would probably say, according to the man himself, a regular panallist on BBC Two’s MOCK THE WEEK and one of the UK’s stand-out stand-up comedians. Known for his one-liners involving puns delivered in a deadpan and slightly neurotic style, his loud shirts and wild hair… and his sublimely surreal takes on the world. “I was walking along the other day and on the road I saw a small dead baby ghost. Although, thinking about it, it might have been a handkerchief.”

MOCK THE WEEK can be a hard show to do. It’s always seven people trying to fit through a door for two he said in a recent interview. But his advantage is his style. “Yes I win. I do short bits. I get in, chuck a grenade and get out quickly.” It’s a style The Guardian acknowledged, “No one can touch Jones when he’s in his stride.”

He did a couple of nights at the Soho Theatre in London last week trying out new material for his next tour and signed my sketch with a two-liner. 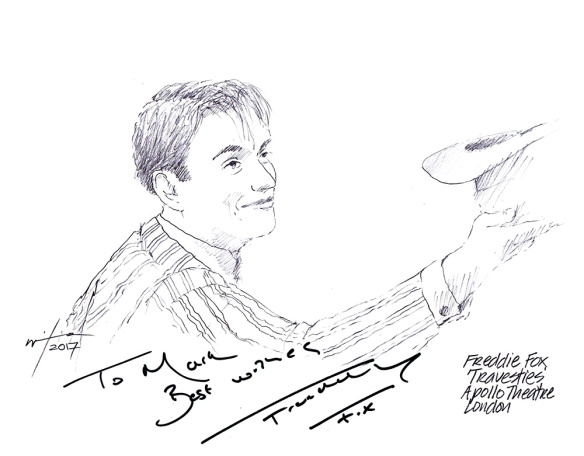 For his last West End role Freddie Fox had less than 48 hours notice. It was just the minor part Romeo opposite Lily James in Kenneth Branagh’s ROMEO & JULIET at the Garrick Theatre last year, after the previous lead Richard Madden and his understudy Tom Hanson  took the phrase ‘break a leg’ a bit too literally. He got the call on Friday and “they wanted me on stage Saturday” he said. Technically he knew the role, having played it 10 months earlier at The Crucible in Sheffield. He described the first night as ‘a memory test’ an making sure he stood in the right play and not fall off the stage.

For his next trick, Freddie’s latest stage appearance as the avant-garde dandy Tristan Tzara in Tom Stoppard’s ‘fiendishly-complicated’ TRAVESTIES, he had months to prepare. Directed by Patrick Marber, the Menier Chocolate Factory production sold out before it opened at the off-West End venue before transferring to the Apollo. It weaves together a fictionalised meeting between Vladimir Lenin, James Joyce and the Romanian-French writer Tzara in Zurich in 1917.

In his four-star review for the Evening Standard, Henry Hutchings wrote, “It’s Freddie Fox who dazzles, revelling in the anarchic energy of a character who’s part nuisance, part genius.”  It’s a performance that has earned him a nomination for the best Supporting Actor Olivier Award at next month’s ceremony. Freddie signed this sketch for me at the stage door between shows last Saturday.

Clare Foster will be known to the fans of ITV’s THE BILL as regular PC Millie Brown. She is also a regular on the UK stage, her latest appearance earning her a Best Supporting Actress Olivier nomination this year for her role as Cecly Carruthers in the major London revival of Tom Stoppard’s TRAVESTIES, which transferred from the Menier Chocolate Factory to the West End’s Apollo Theatre. It’s her first individual  nomination but second nod for Britian’s premier theatre award after being part of the 2006/07 AVENUE Q cast at the Noel Coward Theatre that received the Best Ensemble nom. I met her at the Apollo stage door between shows on Saturday where she signed my sketch.

Consistently appearing in all the lists of the world’s greatest violinists is 37 year old American Hilary Hahn. The three-time Grammy Award winner is renowned  for her virtuosity , expansive interpretations and creative playing who champions contemporary music with several modern composers writing works especially for her, including Edgar Meyer and Jennifer Higdon.

Hilary started playing the violin one month before her 4th birthday and seven years a later made her major orchestral debut with the Baltimore Symphony Orchestra, beginning an extensive international career. In 2004 she recorded her first film score for M. Night Shyamalan’s THE VILLAGE, which received an Academy Award nomination. She plays a 1864 copy of Paganini’s Cannone violin by Vuillaume, which according to a recent interview, never leaves her sight. I drew this sketch of Hilary when she performed late last year at the Royal Festival Hall in London, but missed getting it signed. When she returned to the city last week for a one night performance at Wigmore Hall it gave me the opportunity to complete my mission.

The Broadway box-office hit AN AMERICAN IN PARIS, filled with memorable Gershwin musical numbers and spectacular dance routines, opened this week at London’s Dominion Theatre to a cluster of five-star reviews. Directed and choreographed by Tony winner Christopher Wheeldon and inspired by the Academy Award-winning 1951 film of the same name, premiered at the Palace Theatre on Broadway in April 2015 after a brief engagement at the Theatre du Chatelet in Paris.

Both leads, ballet stars Robert Fairchild and Leanne Cope headline the West End production. Former First Artist with the Royal Ballet, Leanne originated the role of Lise Dassin, originally played by Leslie Caron in the movie. She received a Tony Award nomination for her performance. I attempted to met Leanne in person at the stage door, but London’s fickle Spring weather sprung a leak in my plan last Saturday, so I left it at the theatre and it came back immediately.

Tom Hollander’s welcome return to the stage after a six-year absence has resulted in a Best Actor Olivier Award nomination for his ‘career-best’ performance in Tom Stoppard’s golden oldie TRAVESTIES. The Menier Chocolate Factory’s revival, directed by Patrick Marber, sold out before opening night late last year and transferred to the West End’s Apollo Theatre.  Tom plays the central Henry Carr, who  was a British consular official in Zurich during the first World War and encountered  Russian communist revolutionary Lenin, the founder of Dada, Tristan Tzara and Irish author James Joyce, all of whom were in the city at the time. As a member of a group of actors called The English Players, managed by Joyce, he was cast in the leading role of Algernon in Oscar Wide’s THE IMPORTANCE OF BEING EARNEST.

In his five-star review, The Telegraph’s Dominic Cavendish said “Tom Hollander is hilarious in this mind-bogglingly entertaining Stoppard revival”. He went on to write, “Tom Stoppard’s award-winning 1974 comedy finds the man, who memorably described himself as a ‘bounced Czech’ performing such hire-wire feats of linguistic daring that even undertakes an entire scene in the limerick form. And that’s not the half of it: there are exchanges in Russian, outbreaks of nonsense, a super-abundance of allusion, word-play, parodies and to crown it all, a running pastiche of THE IMPORTANCE OF BEING EARNEST.” Tom signed my sketch of him as Henry at the Apollo’s stage door last weekend. 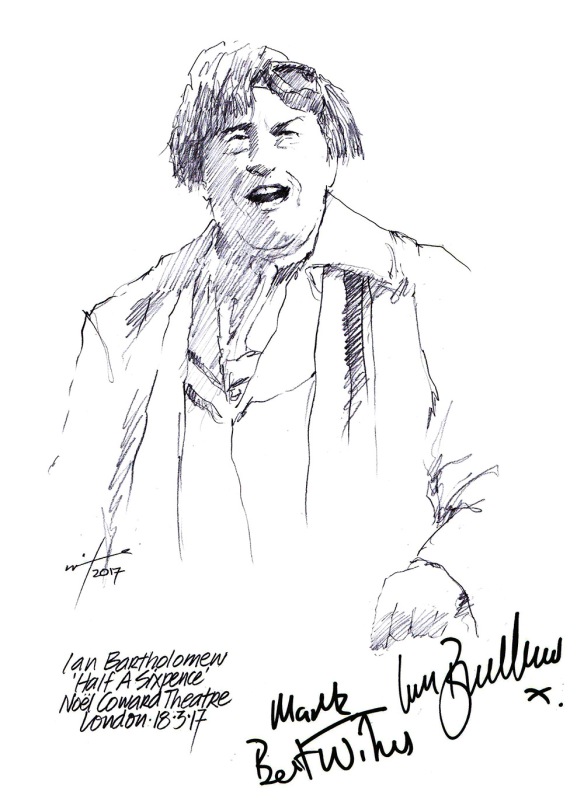 The Noel Coward Theatre is Ian Bartholomew’s second home. Three shows in three years at the West End venue and two Olivier nominations. The front of house staff even gave him a plaque to mark the occasion. In 2014/15 he appeared in the stage version of SHAKESPEARE IN LOVE as Sir Edmund Tylney, the man responsible for drama censorship in Elizabethan England.

Then he played the feisty impresario Vivian Van Damm in MRS HENDERSON PRESENTS last year and he is currently playing the eccentric playwright Critterlow in HALF A SIXPENCE, both roles he ‘got the nod’ for an Olivier nom. He signed my Critterlow sketch between shows on Saturday.

Emma Williams is hoping it will be fourth time lucky at this year’s Olivier Awards. The popular British musical theatre actress earned nomination number four for her current role as Helen Walsingham in the Chichester Festival Theatre’s production of HALF A SIXPENCE, which transferred to London’s Noel Coward Theatre last month. She recently won the WhatsOnStage Award, so here’s hoping!

Emma is also an accomplished songwriter, musician and writer, and is working on her first novel. After her professional stage debut in 2002 at the age of 18 as Truly Scrumptious in the original cast of CHITTY CHITTY BANG BANG at the London Palladium, Emma has originated a further five roles in the West End.

Her first Olivier nom was for Luisa in ZORRO at the Garrick in 2008, followed by Jenny in LOVE STORY at the Duchess and as Maureen last year in MRS HENDERSON PRESENTS at the Noel Coward,  where I managed to catch her last Saturday after the SIXPENCE matinee and she signed this portrait sketch for me. She remembered my MRS HENDERSON drawing which she also graphed. I wished her luck for the big night, which is on 9 April.

“We skipped the light fandango, turned cartwheels ‘cross the floor…” The opening lyrics to one of the great anthems A WHITER SHADE OF PALE, the debut single by the British rock band Procol Harum. It was released in May 1967, in the ‘Summer of Love’, reaching number one across the globe, including the UK, where it stayed for six weeks. Written by founding member Gary Brooker, with Keith Reid and Matthew Fisher it is one of fewer than 30 singles to have sold over 10 million copies worldwide. Rolling Stone magazine listed it at number 57 in its top 500 songs of all time and it was inducted into the Grammy Hall of fame in 1998. As part of the 50th Anniversary tour Gary and the band played one night at London’s Royal Festival Hall earlier this month. It completed their set list and received a standing O. Afterwards he and the rest of the band signed my sketch.

The poignancy of posting this today – 16 March –  is that my dear friend Bronwyn Blackstock would have celebrated her 60th birthday. She was part of our Light Fandango Company, a small group of friends who shared and enjoyed life. It was coined after this song and she was our treasurer (assets nil). Fandango three (F3). Sadly she lost her brave battle with cancer a year ago. This is in memory of her. Happy Bday B. 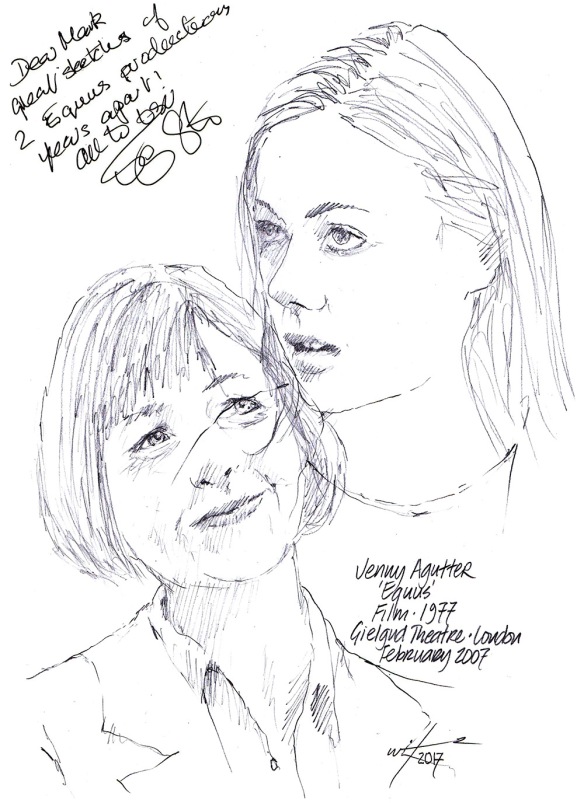 Jenny Agutter won a BAFTA Award for her performance as Jill Mason in Sidney Lumet’s 1977 production of Peter Shaffer’s psychological drama EQUUS, one of my favourite, if not my favourite play. In the 2007 London stage revival of the play featuring Richard Griffiths and Daniel Radcliffe at the Gielgud Theatre she portrayed magistrate Hesther Solomon. A couple of weeks ago I did this sketch of Jenny in both roles and sent it to her. She signed and sent it back with this dedication.