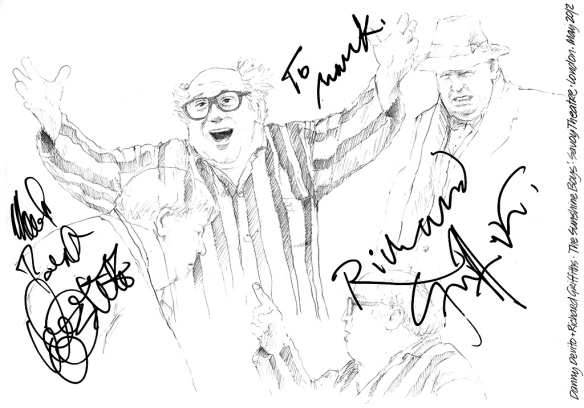 To say that Richard Griffiths dislikes autograph collectors is an understatement. In fact, the week I went to ask him to sign my sketch at the Savoy Theatre he was quoted in a newspaper interview saying that autograph hunters were a pet hate and “the scourge of my life for 35 years.” Ironically his signature is one of the nicest from any celebrity – a calligraphic classic!
In contrast, Danny Devito is very relaxed and obliging… when you can find him. He was staying at the Savoy Apartments, adjacent to the theatre with the Hotel’s plush forecourt inbetween. During THE SUNSHINE BOYS season he used all available entrances and exits… and then some, with varying times. No pattern emerged. It was clear that this was going to be at least a 2 night operation.
The mission went as expected. I got Richard first try and it took four attempts to get Danny. Richard was straight forward – out the back stage door, into a waiting car, using the path of least resistance. He was about to get into his car when I asked him if he could please sign the sketch. He mumbled a few inaudible things, but duly obliged, then he looked at me and said ‘nice work’. Nice ‘graph I replied, then he sped off.
After waiting three nights till last train for Danny, I grugingly went again – bingo. He popped out at 10 through the theatre side door (we had a tip off). Signed for about 15 people, including the sketch. He didn’t say anything, but his PA (I think it was his son) said “that’s fantastic – it looks just like Danny!” “That’s the general idea,” I replied. Mission accomplished – a little sunshine boys into my life.
Advertisement 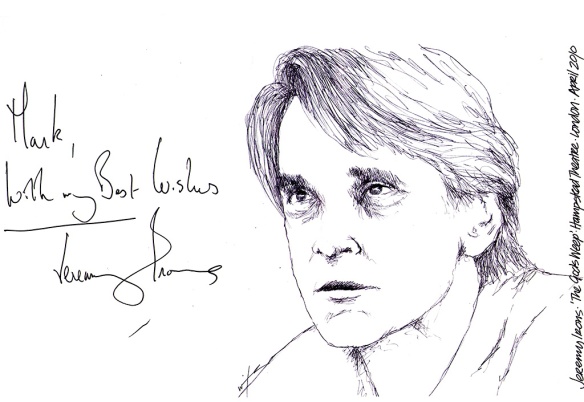 Oscar winner Jeremy Irons had previously signed a sketch for me when he played the lead role in Chris Hampton’s adaption of EMBERS at the Duke of York’s Theatre in 2006.

Expecting a similar result I waited at the Hampstead Theatre one Saturday afternoon to catch him going in for a performance of THE GODS WEEP – an update of the King Lear saga by Dennis Kelly. The Hampstead has a number of entrances and exits, providing a challenge for the ‘siggy stalker.’

Alas, I missed him, so left the sketch with a suitable note and a stamped reply envelope at the stage door. I received the drawing back a few days later, unsigned with a message from Jeremy’s PA. It said that Mr Irons would be happy to sign it if I made a donation to the Prison Phoenix Trust which offers yoga, meditation and books to prisoners. He suggested £15 would be an appropriate amount.

I duly sent the sketch back with the recommended contribution and it arrived back signed and dedicated along with a thank you for the donation. A couple of weeks later, Jeremy was attending an opening night in the West End with his wife Sinead Cusack and signed some autographs… for free! 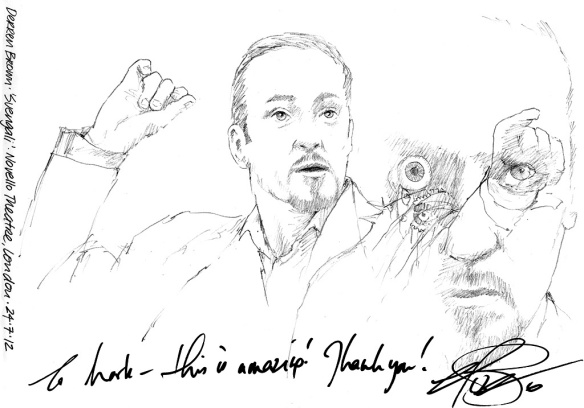 Illusionist, painter, writer, showman and sceptic, Derren Brown signed my sketch after a performance of his Olivier Award winning ‘Svengali’ at the Novello Theatre in London. He is one of the nicest entertainers – very engaging with the fans at the stage door. He seemed genuinely interested in everyone and was in no rush as he signed autographs and posed for photos… then again he did hypnotise half of the audience! So, I checked the next day and the drawing was indeed signed and inscribed for me! 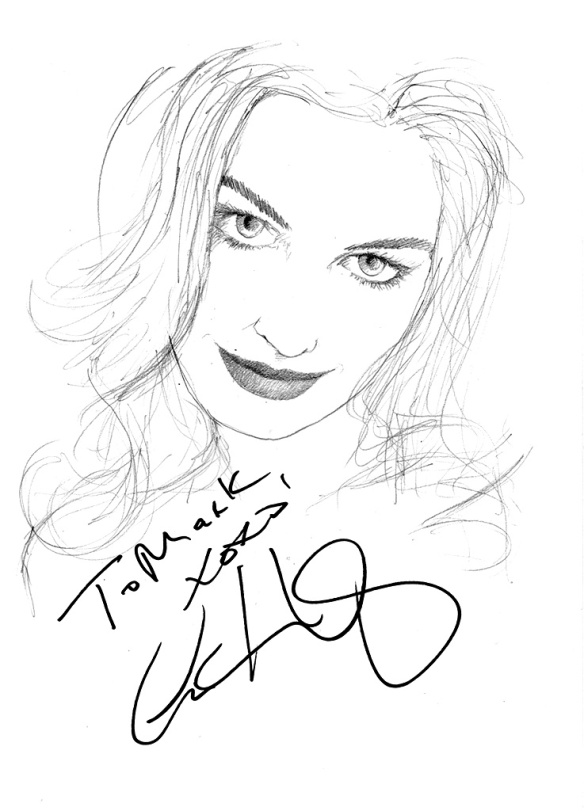 Before Anne Hathaway entertained everyone with her nipples while winning her Oscar, she signed my drawing at the Les Misérables premiere in London. She was a real autograph trooper, the only one in the cast to go around all the public in the drop off area, especially as there’s not much too her and it was very cold! Not to mention that she didn’t have much hair at the time… 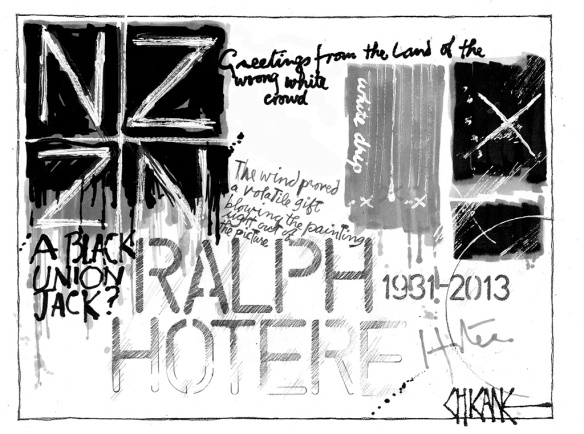 I was lucky enough to meet Ralph in my Dunedin days, I really loved his use of stencils and protest artwork. When I was a designer at the Manawatu Art Gallery I actually hung the famous black Union Jack, which was his anti-Springbok Tour piece, which is depicted in the homage. 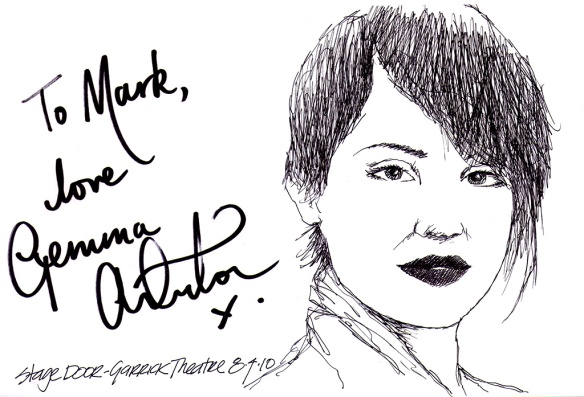 Gemma Arterton signed my drawing at the Garrick Theatre in London, in 2010, after a performance of “A Little Dog Laughed”. 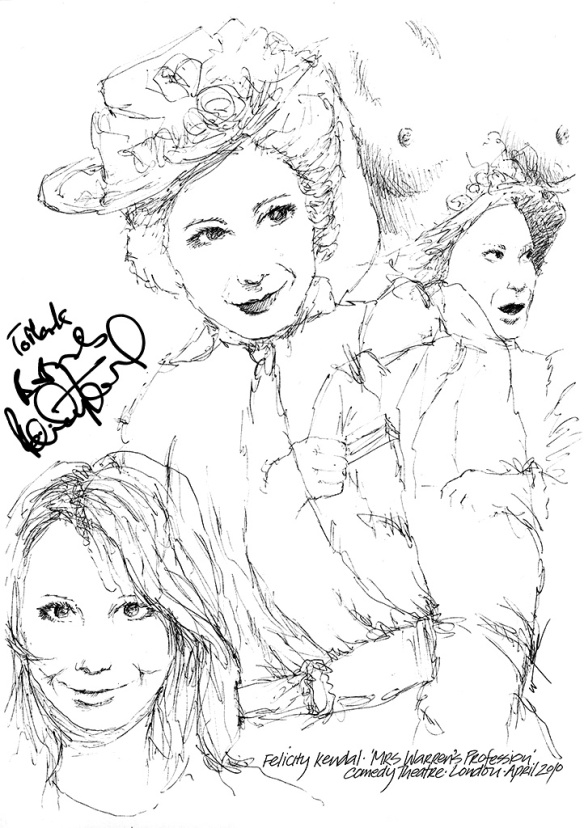 Felicity Kendal signed for me at the stage door of Mrs Warren’s Profession back in 2010. She was lovely to meet, as you would expect. 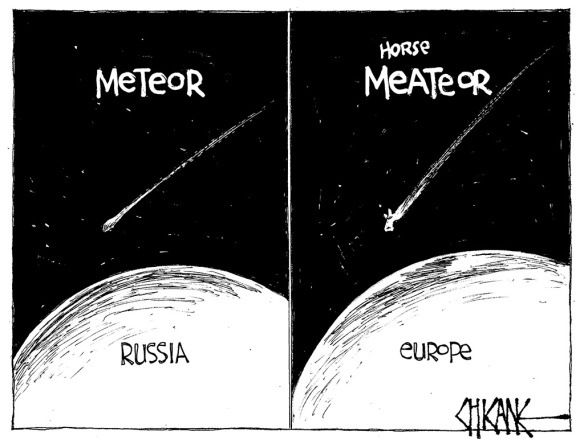 One of my cartoons from a few days ago

Back in 2010 Richard Briers was in National Assurance at the National Theatre in London. As well as being performed on stage it was screened live in theatres around the world and for the courtyard at the National (where I was). At the end of the play the cast all came out to do a curtain call for the people in the courtyard, before quickly disappearing back inside again to do the curtain call for the people in the actual theatre.

Richard was, understandably, a little slower than the others and the staff at the National were eager to tell us all that there would be no autographs. I was pushed out of the way by them as they were eager to get him back to the stage ASAP. However, he saw my drawing and insisted that “as this gentleman has taken the time to draw me I will take the time to sign it for him”. Very kind man. 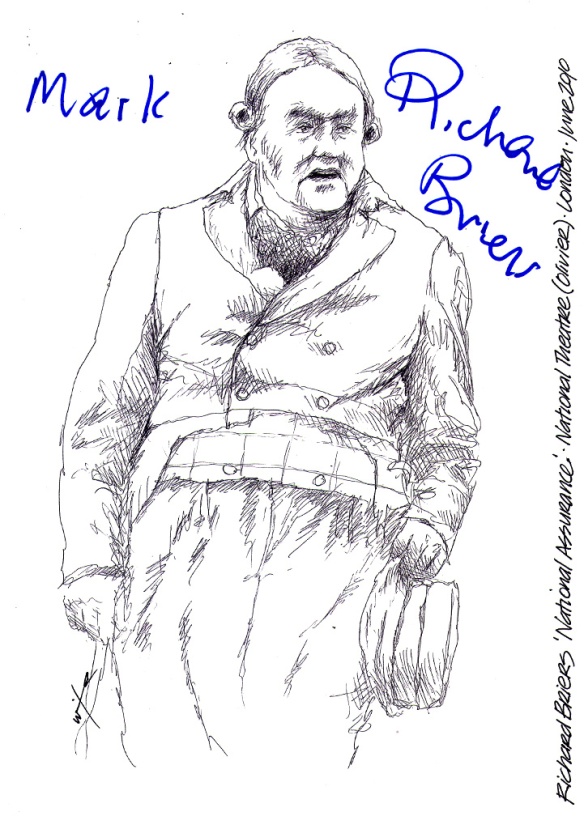 Went over to the What’s On Stage Awards in London last night, where Mr Tim Minchin was kind enough to sign my drawing for me. Now on ebay for 30 pieces of silver (ha! not really). 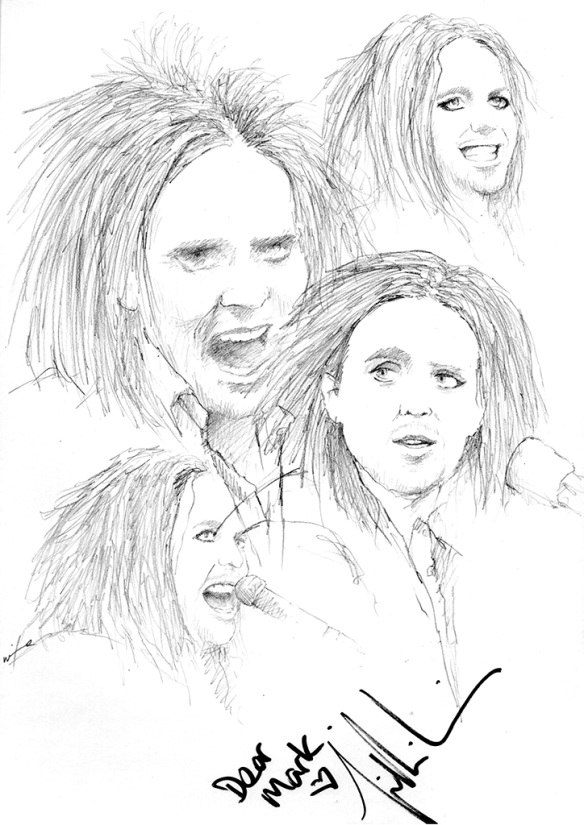