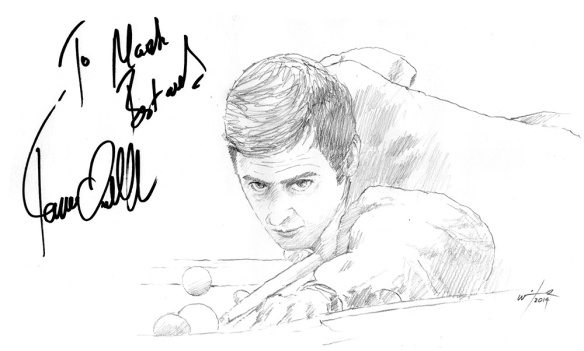 Ronnie “the Rocket” O’Sullivan is considered a genius in the world of snooker and one of the most naturally talented players in the history of the sport. Many regard him as the greatest player ever. His rapid, attacking style and ability to play right or left handed has won him five World Championships, five Masters and four UK Championship titles, known as the Triple Crown events.

In his sixth World Championship final earlier this week, at The Crucible, Ronnie was beaten by 18 frames to 14 by Mark Selby in a thriller and what many commentators believe was one of the best ever. On his way home, Ronnie and his son Ronnie Jnr were involved in a car crash on the M1, but walked away unscathed. Ronnie kindly signed and returned this sketch from The Crucible last week.