After a year and a half trying, I finally managed to get Cillian Murphy (pronounced Kil-ian, not Sil-ian as a fellow collector warned me – an error I and many others have made) to sign a sketch for me. He is a fiercely private person who shirks celebrity status. The Cork-born, former law student and rock musician is also known for his distinctive eyes and chameleonic performances in diverse roles.

In 2011 Cillian performed in the monodrama Misterman, written and directed by Enda Walsh. After playing to packed audiences and rave reviews in Ireland and New York, it transferred to the Lyttleton stage at the National Theatre in London n 2012.

Misterman is a physically demanding one man performance on a vast set. Cillian plays Thomas Magill – a crazed small town preacher who has fled the town and is holed up in an  unused depot in the countryside, existing on Fanta and Jammie Dodgers. The unhinged evangelist has made a row of crosses out of flattened Fanta and surrounded himself with several ancient tape recorders, out of which come several disturbing voices that tell a fractured story of a single day’s events. Cillian won the Irish Theatre Award and a Drama Desk Award for his performance.

In April 2012 I left a sketch at the National Theatre for Cillian to sign after him a couple of times at the stage door. Subsequently I was in the wrong place at the right time at a couple of premieres Cillian attended. So, I redrew another sketch and sent it to his London agent. Come 26 October 2013 nothing had materialised. On that evening he was due to introduce the film that inspired him at the BFI in London as part of their Screen Epiphanies series. The film was Jerry Schatzberg’s Scarecrow, with Al Pacino and Gene Hackman. It won the Grand Prix at the 1973 Cannes Film Festival. Maybe no coincidence he plays the DC comics super villain Dr Jonathan Crane – alias ‘The Scarecrow’ in the last two Batman films.

The same collector who gave me pronunciation advice also said Cillian turned up three hours earlier last time. 8.45pm minus 3 hours = 5.45pm. I made my was to the BFI on London’s Southbank at 4pm and ensconced myself in a corner and waited. At 8.15pm he arrived through the front and quickly headed for the Green Room. Only a phone call halted his progress… and a handful of ‘graphers. He was happy to sign and dedicate the fourth sketch before he slipped into the safety of the Green Room – well worth the wait.

Montserrat Lombard is “an interesting name,” I said, when she signed it on my sketch. “It’s Spanish,” the English-born actress replied.

Montserrat – a Caribbean island with a once dormant volcano erupting, forcing two thirds of its population to flee; or a multi-peaked mountain near Barcelona? Probably the latter. Close. In fact, her Spanish father named her after the Barcelonian opera legend Montserrat Cabellé.

Lombad – from Lombardy, the region in Northern Italy. Her mother is Italian, so she’s half Spanish, half Italian. She’s also best known as policewoman Sharon ‘Shaz’ Granger in the BBC Drama series Ashes to Ashes, plus roles in a variety of television shows and films such as St Trinians 2 and The Imaginarium of Doctor Parnassus.

In September this year, Montserrat made her professional stage debut in the World Premiere of the crime caper Barking in Essex at Wyndham’s Theatre in London. She plays Allegra Tennyson (an equally interesting name) a lawyer trying to sort out the Packer family, a dysfunctional Essex brood played by Lee Evans, Sheila Hancock and her Ashes to Ashes co-star, Keeley Hawes. The black comedy runs until 4 January 2014.

The first major revival of Jez Butterworth’s Olivier award-winning black comedy Mojo is currently in previews at the Harold Pinter Theatre in London. The original production directed by Ian Rickson opened at the Royal Court Theatre in July 1995 prior to a sell out West End run in 1996.

Two of Britain’s great theatre collaborators, Jez and Ian reunite for this staging after their hit sensation Jerusalem and the critically acclaimed The River in recent years. A subsequent film adaption featuring Harold Pinter himself, was directed by Jez in 1997.

Set against the fledgling rock’n’roll scene of 1950’s Soho, the savagely funny play delves into the sleazy underworld and power games of London’s most infamous district. It features a stellar ensemble cast, Brendan Coyle, Rupert Grint (making his stage debut), Daniel Mays, Ben Whishaw, Colin Morgan and Tom Rhys Harries. The first performance was on Saturday evening (26 October) which I was lucky enough to get a £10 ticket for (standing in the balcony). I returned on Monday with my sketch which all the cast signed at the stage door. Mojo opens 13 November and will run to 25 January 2014. 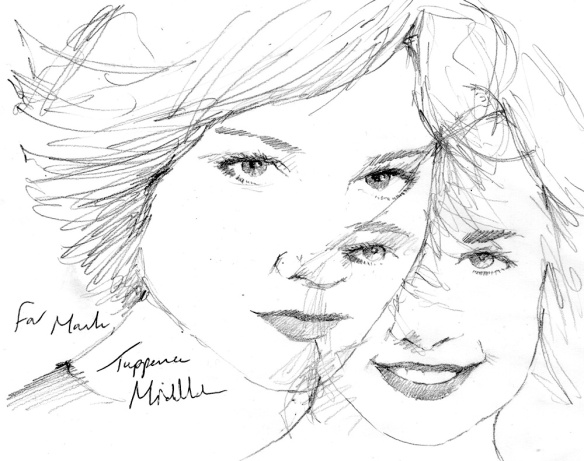 Actress Tuppence Middleton has a peculiar rare medical condition that allows her eyes to change colour of their own accord. They range from yellow to hazel, or green. She also collects stuffed animals.

Her mother was nicknamed ‘Tuppence’ as a small girl by her grandmother, so ‘Tuppence’ was christened with the moniker.

“It’s come in handy,” she said, “I haven’t met another Tuppence so far, so people remember it.” She made an impact recently in Danny Boyle‘s Trance, as the girl locked inside James McAvoy‘s past. Her first London theatre engagement was a rare revival of Graham Greene’s The Living Room at the Jermyn Street Theatre in early 2013, where she signed my sketches. 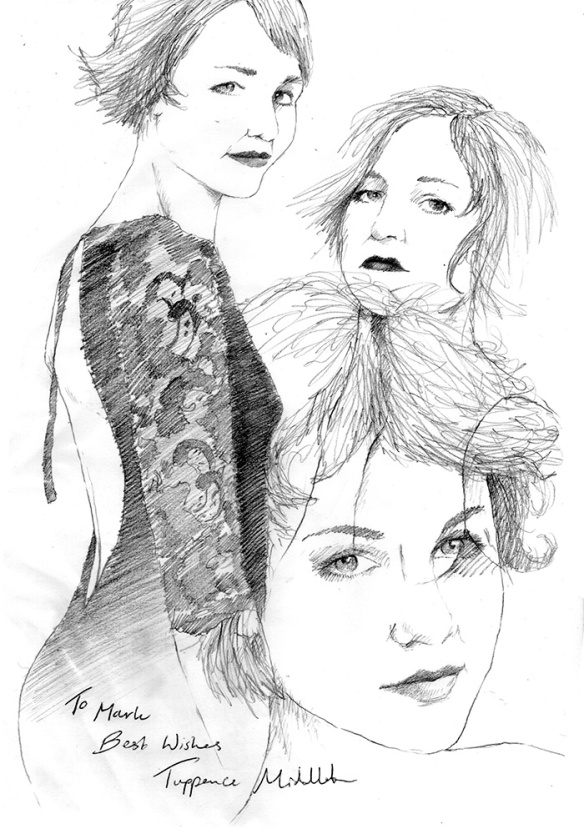 London-born Carey Mulligan made her film debut in 2005’s Pride and Prejudice, but her breakthrough role was Jenny in An Education in 2009. Likened to Audrey Hepburn by some critics, she was nominated for numerous awards including the Oscar and a BAFTA, which she went on to win.

In 2007 she appeared in Christopher Hampton’s adoption of Chekhov’s The Seagull at London’s Royal Court Theatre to critical acclaim. She starred opposite Kristin Scott Thomas and Chiwetel Ejiofor.

It transferred to Broadway in 2008 resulting in a Drama Desk Award nomination.

An alumna of King’s College, Cambridge, Lily Cole has had to balance her scholarly activity with her screen and modelling commitments. From appearing on the cover of British Vogue at the age of 16, she has modelled for the world’s leading brands including Alexander McQueen, Chanel, Louis Vuitton, Jean Paul Gaultier and Prada. Paris Vogue listed her as one of the top 30 models of the 2000s.

Lily has appeared in a dozen films with her first lead role as the bohemian Valentina in Terry Gilliam’s fantasy The Imaginarium of Doctor Parnassus (2009).

A Daily Mirror poll in 2010 voted her the fourth sexiest redhead of all time, behind Florence Welch, Prince Harry and Nicola Roberts. She supports a variety of humanitarian and environmental causes including the children’s charity Global Angels and the Environmental Justice Foundation.

The biro sketch is based on her character Lettuce Leaf in Sally Potter’s murder mystery Rage. It was the first feature film to debut on mobile phones and starred Jude Law and Judi Dench. I left the drawing at the Soho Hotel where Lily was attending the premiere of Dr Parnassus in October 2009, and she returned it signed a month later. 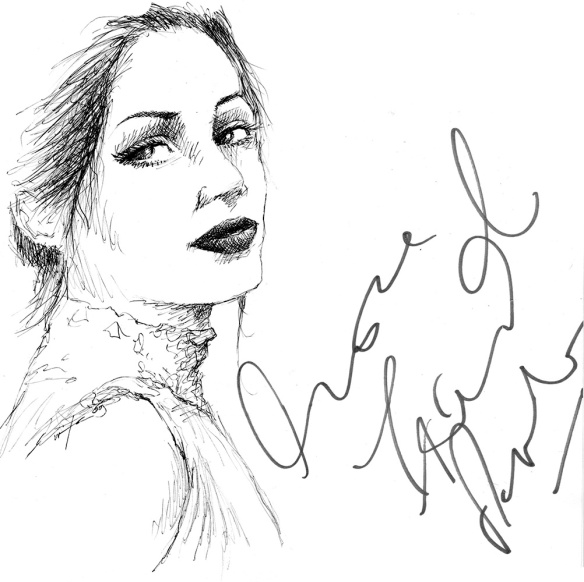 Freida Pinto rose to prominence in her debut film as Latika in the 2008 British drama Slumdog Millionaire. The ‘sleeper hit’ of that year went on to be nominated for 10 Academy Awards, winning eight, including Best Pictures, Best Director and Best Adapted Screenplay. It was also nominated for 11 BAFTA Awards, including Supporting Actress nod for Freida. It won the Screen Actors Guild Award for Outstanding Performance by a Cast.

Freida is also a member of the Agassi Foundation, which was founded by tennis legends Andre Agassi and his wife Steffi Graff to provide education for deprived children.

Freida signed my quick biro sketch at the Gala screening of Miral, at the Vue Cinema in Leicester Square, which was part of the BFI London Film Festival in October 2010.

Caroline Quentin is best known as Maddie Magellan in Jonathan Creek, and as Dorothy in Men Behaving Badly, for which she won Best Actress at the 1995 British Comedy Awards. She won again in 2004 for her role in the TV film Von Trapped.

Caroline will head the cast of the satirical WWI  musical Oh What A Lovely War at the Theatre Royal Stratford East next year. She signed my sketch just before the final performance of Terrible Advice at the Menier Chocolate Factory in London on 12 November 2011.

Former ‘Eastender’ and ‘Bionic Woman’ Michelle Ryan performed the role of Sally Bowles in Cabaret for a UK tour, before transferring to London’s Savoy Theatre in October 2012 for its season finale, where Michelle signed my sketches. 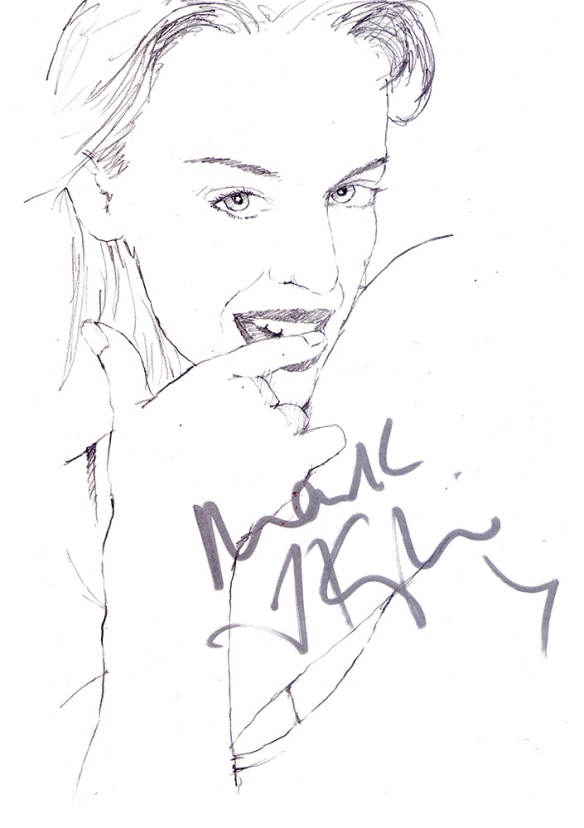 Kylie Minogue has sold more than 68 million records worldwide. Can’t Get You Out Of My Head reached number one in more than 40 countries. She has won mulitple ARIAs and BRIT awards and a Grammy. In 2008 Kylie was appointed an Officer of the Order of the British Empire (OBE) and the French Government bestowed the title Chevalier (Knight) of the Order des Arts et des Lettres on her.

Her hit single I Should Be So Lucky was added to Australia’s National Film and Sound Archive Registry.

Born in Australia, Kylie is widely accepted as “an adopted Brit” and is considered a ‘gay icon’. In March 2010 she was declared by researchers as the “most powerful celebrity in Britain”.

She overcame breast cancer in 2005 to resume her career and is involved in a number of humanitarian works.