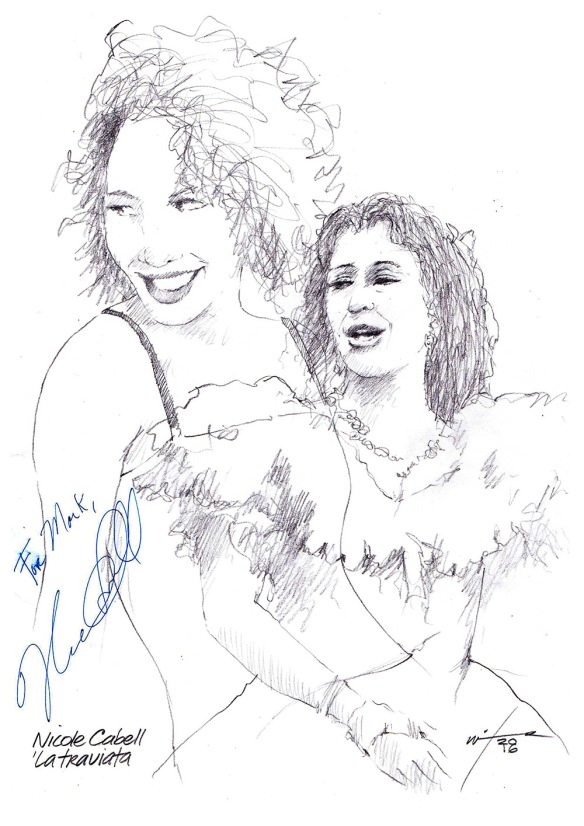 One often most sought-after lyric sopranos today, Nicole Cabell returned to Covent Garden this month for two performances as the lead Violetta in the Royal Opera House’s latest season of LA TRAVIATA, a role she previously played in the San Francisco production in 2014. With African American Korean and Caucasian ancestry, Nicole grew up in the Californian beach community of Ventura before gracing the world’s Opera stages. After winning the 2005 ‘BBC Singer of the World’ Competition in Cardiff, she made her London debut at THE PROMS the following year and for the Royal Opera in LA JUIVE at the Barbican.

Nichols signed this drawing I did of her as Violetta  at the ROH after her final performance on 19 March.

What better subject to draw than sketch comedy. In this case a comedy sketch group and “flagrant abusers of all things cute and fluffy.’ Fran Bushe, Kat Cade and Perdita Stott, collectively known as the KITTEN KILLERS, have been described by one critic as ‘Archly clever at the same time as being damn silly.”

They played two nights last week at the Soho Theatre where in April 2013 they formed after being part of the Young Company Lab. I left this sketch and it came back signed with a very nice note. It’s hard to think they would hurt kittens, given their kindness to a comedy sketch artist.

The favourite to win this week’s Olivier Award for Best Actress is Denise Gough for her exceptional performance as a recovering addict in Duncan Macmillian’s PEOPLE, PLACES AND THINGS. She has already won the Critics’ Circle Award. A year ago, the Irish actress was out of work and contemplating quitting acting. She applied for a cleaning job and auditioned for the play at the National Theatre, winning the lead role. It opened on the National’s Dorfman stage last September to rave reviews and a sell-out season, transferring to the West End’s Wyndham’s Theatre this month for a twelve week run.

Denise signed my sketch at the Wyndham’s stage door prior to Saturday’s matinee. Oh and apparently she didn’t get the cleaning job, which was just as well really.

LITTLE VOICE and ABSOLUTELY FABULOUS star Jane Horrocks has returned to the Young Vic stage in London with her new show IF YOU KISS ME, KISS ME. Described as ‘part gig, part dance piece’ the one hour hybrid show was conceived by Jane and choreographer Aletta Collins as a tribute to the post punk new wave music that Jane grew up with in Lancashire during the 70’s and early 80’s. Jane performs her own ‘gritty and soulful’ versions with a ‘bit more contemporary edge to them’ of songs from The Smiths, Joy Division, The Human League, The Buzzcocks, Soft Cell and others, accompanied by a live band and a company of dancers.

In his four-star review, The Telegraph’s music critic Mark Monahan said it was “one of the crispest and kookiest hours of entertainment you’re likely to encounter all year.”

Jane signed this drawing for me after her matinee performance on Saturday.

I first met  English actress Jasmine Hyde at friend and fellow kiwi, Ben Farry’s London flat in the early part of this millennium to discuss a film project I was developing at the time.  Both Ben and Jasmine graduated from RADA in 2000, along with Daniel Mays who also joined us. Jasmine has had an varied stage and screen career along with acclaimed radio work includes the BBC dramatisation of John Mortimer’s RUMPOLE OF THE BAILEY series and THE ARCHERS. In 2001 she won the prestigious Carlton Hobbs Award for Radio.

Jasmine’s extensive stage work includes working with the Royal Shakespeare Company. In 2002 she appeared in the Trevor Nunn directed, nine hour trilogy THE COAST OF UTOPIA, three sequential and self-contained plays by Tom Stoppard on the Olivier stage at the National.

I caught up with Jasmine  at the Arts Theatre in London a couple of weeks ago where she is currently featuring in the world premiere of the irreverent biblical comedy NOT MOSES. I drew this montage of her recent stage performances which she signed for me.

Last October I posted this sketch of Daniel Craig and Hugh Jackman in A STEADY RAIN which Daniel signed at the SPECTRE World  Premiere at London’s Royal Albert Hall. Then I had to wait for an opportunity to get Hugh to do the same. That happened last week at the Premiere of EDDIE THE EAGLE at the Odeon in Leicester Square.

A STEADY RAIN had it’s Broadway debut at the Gerald Schoenfeld Theatre in late 2009. Michael Huff’s crackerjack two-handler is an incisive character study of the stressed relationship between two Chicago cops, boyhood buddies and professional partners. Steven Spielberg has earmarked it for a film adaption.

Daniel played Joey and Hugh was Denny. The former is introverted, single and lonely and in love with Denny’s wife, who by contrast is the married, angry, racist tough-guy who cheats on his wife. With the two A-listers from the super-heroic franchise film roles – James Bond and X-Men mutant Wolverine, It became the hottest ticket in town, selling out the 12 week season in no time.

The New York Times theatre critic Ben Brantley praised both performances in the ‘gripping noir tale’, but did slip in the notion that if “they had chosen to recite the alphabet in counterpoint, their joint appearance would still generate the same ticket sales.”

As mentioned Hugh was in town last week and steady rain threatened to stymy the sketch signing moment, but he inscribed his distinctive monogram ‘HJ’ moniker on the drawing before any weather intervened.

It was a little known black and white French film, shot on an old fashioned 1.33:1 ratio, mostly silent with a running time of only 100 minutes and featuring the director’s wife in a lead role, but THE ARTIST was the big winner in 2011, collecting every major Best Picture award including the 5 Oscars and 7 BAFTAs.

Michel Hazanavicius’ celebrated tribute to the early era of motion pictures starred Jean Dujardin as the silent movie star who meets a young dancer, French Argentine actress Berenice Bejo as the advent of talking pictures sends their careers in opposite directions. The film had a small screening at the BFI London Film Festival and given the title I just had to pop along where a relatively small crowd had gathered so I able to meet everyone without the usual collecting carnage. Then it became a huge hit.

When it later returned to London for the actual Premiere, the normal battle zone resumed. l drew this sketch of Berenice to get signed on the day, but mailed it to her Paris agency instead, which she signed and dedicated for me. 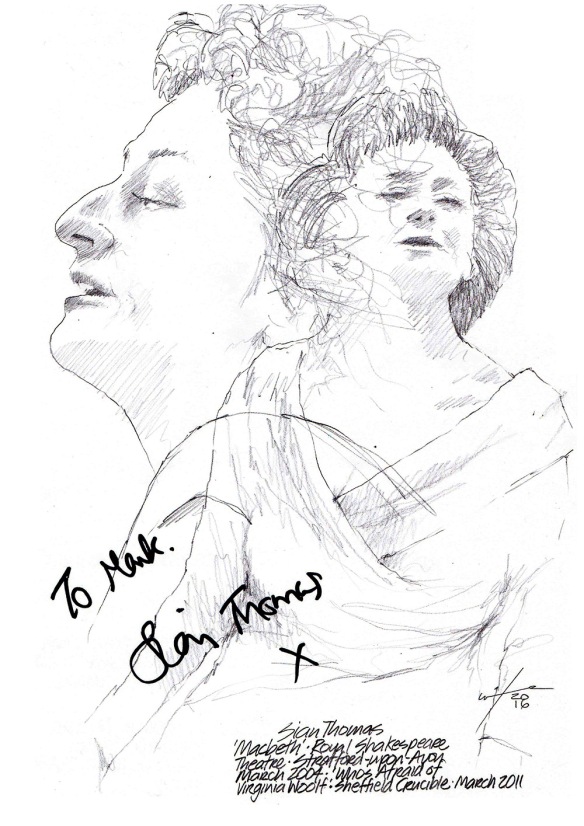 Sian Thomas has done it all. Her screen credits include HARRY POTTER and MERLIN and on stage she has covered the full gambit of parts including Martha in Edward Albee’s WHO’S AFRAID OF VIRGINIA WOOLF? and Lady Macbeth in ‘the Scottish Play’. In 2002 she appeared with Madonna who was making her West End debut in UP FOR GRABS at Wyndham’s Theatre. Michael Billington wrote in his Guardian review, “Sian Thomas, who can get a laugh simply through the flick of an eyelid is superb as a Courtauld-trained  consultant longing to get her revenge on the corporate world.”

In the Royal Shakespeare’s 2004, production of MACBETH at Stratford-upon-Avon, Billington wrote, ” Sian Thomas was born to play Lady Macbeth, the right mixture of attack, sexiness and emotional drive.”

I drew this sketch of Sian as Lady Macbeth and Martha and meet her at the Donmar Warehouse on Saturday after the matinee performance of WELCOME HOME, CAPTAIN FOX where she signed it for me. 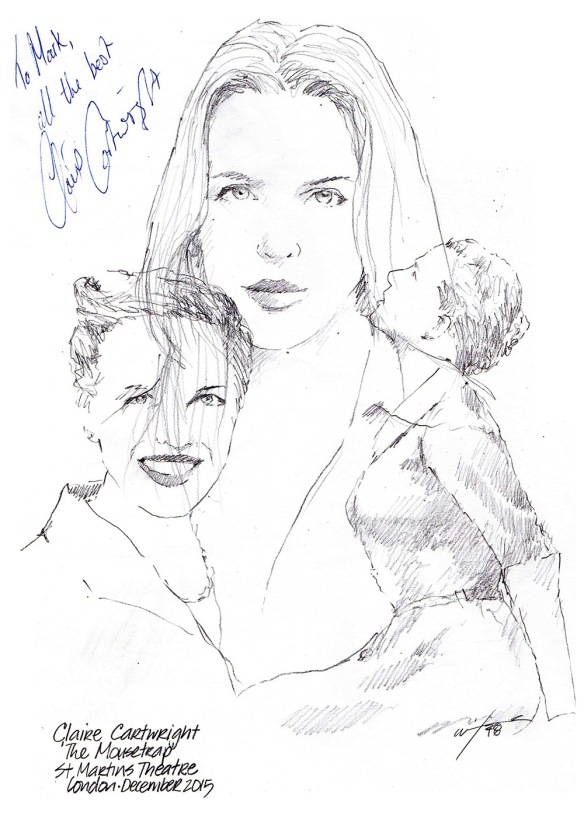 Agatha Christie’s famed  West End murder mystery and the world’s longest running play, THE MOUSETRAP  has eight characters including Mollie Ralston and Miss Casewell. As one of the 2015 cast, Claire Cartwright played Molly, who along with her husband Giles runs the guesthouse, Monkswell Manor. Jocasta King joined this year’s cast as the strange, aloof Miss Casewell with the horrific childhood experiences. Jocasta also played Mollie and Miss Casewell during the 2015 UK tour before settling into St Martin’s Theatre, the productions permanent home.

Jocasta signed her sketch last week at the stagedoor and Claire returned her drawing after I left it with her London agent. 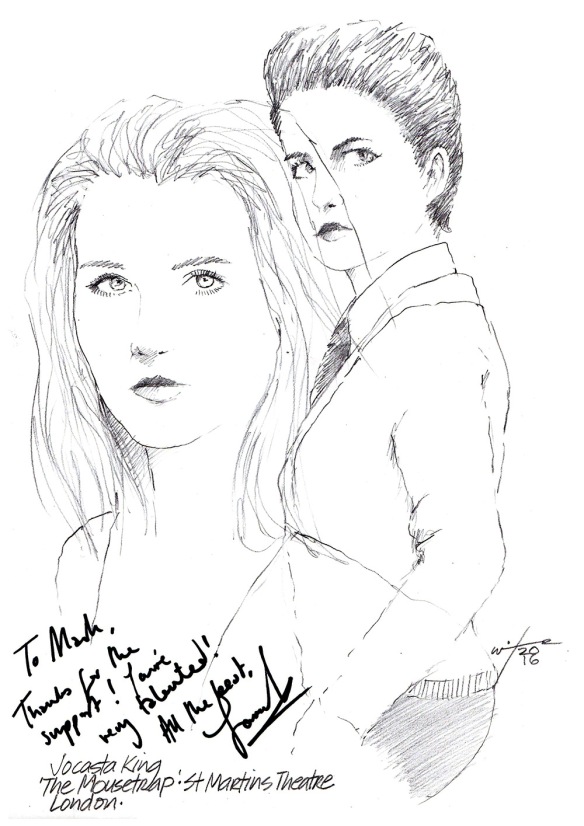 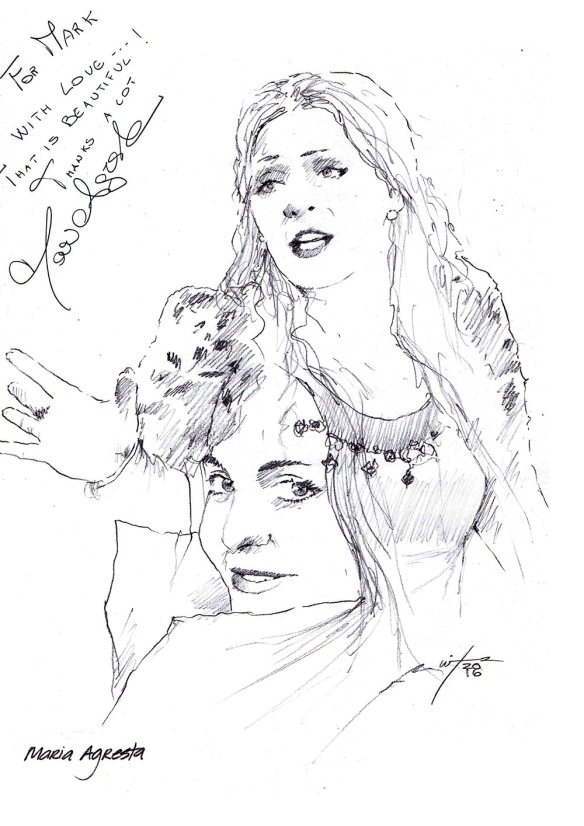 Italian soprano Maria Agresta has just finished playing Vioetta, the main character in Giuseppe Verdi’s tragic 1853 opera LA TRAVIATA at the Royal Opera House. After winning several international competitions Maria began her professional operatic career in 2007 and made her Covent Garden debut in 2014 as Lucrezia Contarini in Verdi’s I DUE FOSCARI. She returns to the role of Violetta in Munich and at the Opera Bastille in Paris during June after making her debut at New York’s Met as Mimi in LA BOHEME.

Maria signed my drawing  for me at the ROH after her final performance on 12 March.