A selection of editorial cartoons depicting events from the last 12 months; graphic expressions, both textual and pictorial of an eventful year. They were predominately produced for the New Zealand print media.

The editorial cartoon is intended to make you think, not necessarily laugh. It is not a comic strip. They are usually placed on the publication’s editorial page where ‘opinion’ dominates. The editorial cartoonist has a number of devices at his disposal – caricature, irony, ridicule, satire, stereotypes, symbols, analogies, among a raft of conventional and unconventional codes.

Humour is only one of the tools available. As pictorial chroniclers of history, we encompass the full spectrum of current issues, both controversial and comical, serious and otherwise. An effective editorial cartoon combines a number of layers of meaning – both intended and those open to the reader’s interpretation.

If you’d like to use any of the cartoons below, please purchase via Cartoon Stock. 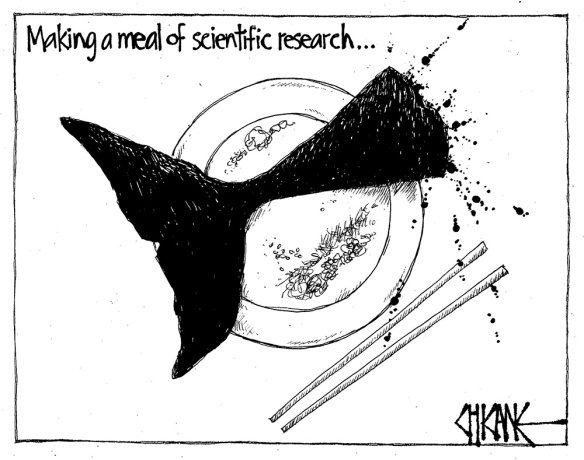 END_OF_DOCUMENT_TOKEN_TO_BE_REPLACED

Brigitte Bardot, widely referred to simply by her initials, was an icon of the 1950s and 1960s – the ‘chic unique’ was the original sex kitten. What set her apart was a combination of her eyes, pout and attitude which I tried to capture in this quick sketch.

Brigitte has such a distinctive graph… as you would expect and is always very obliging when requested for an autograph. I sent her this sketch recently, wishing her a happy 80th birthday. It came back, signed, in next to no time.

Globally adored, Brigitte was the first continental actress to achieve Hollywood fame. During the 1960s she and Marilyn Monroe were the most celebrated pin ups of their day. Time magazine called her, ‘the princess of pout, the countess of come-hither… Brigitte Bardot exuded a carefree naive sexuality.”

After retiring from films, Brigitte has devoted her life to animal activism, establishing her Foundation in the mid 1980s and remains outspoken and controversial for her cause.

Liam Mower was one of the three original ‘Billys’ rotating the role in the West End production of Billy Elliot The Musical at the Victoria Palace Theatre. It’s the story of motherless Billy in the north of England during the coal miners’ strike who trades boxing gloves for ballet shoes.

Along with cast mates James Lomas and George Maguire he won the 2006 Olivier for Best Actor in a Musical, the youngest recipient of Britain’s most prestigious theatre award.

Originally signed for six months, he became indispensable and Sir Elton John (who wrote the music) and Stephen Daldry, the director, renewed his contract three times. After being picked to play Billy on the show’s opening night in 2005 he remained 18 months in the role.

He made his final scheduled appearance as Billy on 30 September 2006 . It made local and international news, spelling the end of the original boys cast in the title role. On an emotional final night he was presented with a dog called ‘Billy’. Director Stephen Daldry said, “Rarely does one ever come across a performer with so many skills and talents, particularly when matched by Liam’s determination and good humour… one of the most celebrated child performers ever in the West End.”

He is now part of Matthew Bourne’s New Adventures dance company and is currently sharing the lead role in Edward Scissorhands with Dominic North at Sadler’s Wells where he signed this drawing. 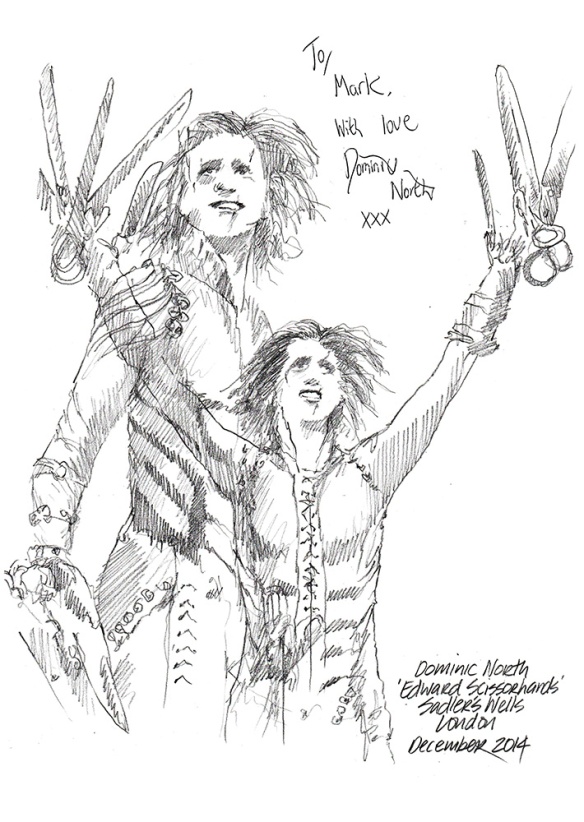 This year’s Christmas offering at Sadler’s Wells in London is Matthew Bournes’ revival of Edward Scissorhands based on the classic Tim Burton movie and Danny Elfman’s emotive score. It’s a gothic fairytale set in the middle American town of Hope Springs, a latter-day tragic tale of forbidden love, a bionic boy with scissors for hands, longing for love and acceptance.

The Times described it as, “the perfect synthesis of dance and drama, comedy and pathos, exuberant theatrically and heart warming entertainment”.

Dominic North returns to the title role he originated in 2005. He alternates performing Edward with Liam Mower (the original Billy Elliot). Ashley Shaw and Katy Lowenhoff do the same as Kim Boggs, who is torn between Edward and the brutish Jim Upton.

I left these sketches at the theatre last week and Dominic, Liam, Katy and Ashley all signed them for me – a nice Chrissy pressie.

I had just sent this sketch of Sir Ben Kingsley to him for signing literally on the same day I wen to the third instalment of the Night At The Museum franchise European premiere at the Empire in London’s Leicester Square. Guess who turned up? He plays Ahkmenrah’s father in the film, so I missed getting him to sign the drawing in person, where he was his usual obliging self signing for everyone.

In a career spanning over 40 years, Sir Ben has won an Oscar Grammey, BAFTA, two Golden Globes and Screen Actor’s Guild Awards to become one of Britain’s most celebrated actors. He was knighted in 2002, telling the Queen at the ceremony at Buckingham Palace that, “winning an Oscar pales into insignificance – this is insurmountable.”

I didn’t have to wait long. The sketch arrived back, signed and dedicated the following week.

I left this sketch out overnight, with a red sharpie and PRESTO. Signed, dedicated and stood on. (Blitzen’s autograph, I believe).

Compliments of the season to all my readers. 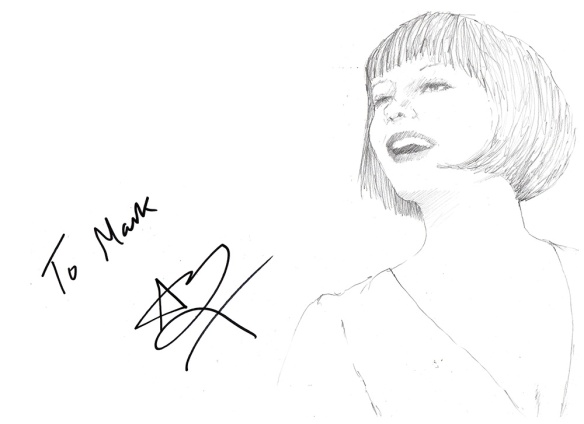 The 25-year-old marriage of James and Eleanor (Owen Teale and Zoe Wanamaker) is disrupted by his affair with Annabel’s femme fatale.  The playwright has also created their alter egos, Jim and Nell (Oliver Cotton and Samantha Bond) which allows the lead characters to express their private thoughts and anxieties.The technical device was not given to the femme fatal Kate, who comes across as a heartless predator.

Oxford-trained Annabel has balanced her career with a bunch of Shakespearian parts-she played Queen Anne to Kevin Spacey’s Richard III at the Old Vic – and a stint as a vampire in the cult BBC series Being Human.

She signed this sketch of her as Kate at the Theatre in June 2013. 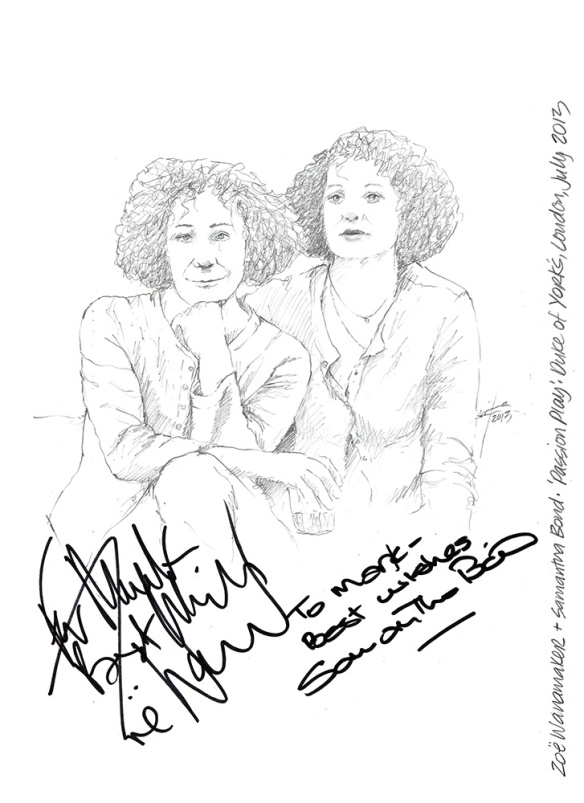 Two of the great contemporary British actors of our time, Zoe Wanamaker and Samantha Bond combined in David Leveaux’s beautifully judged revival of Passion Play at the Duke of York’s Theatre last summer.

Peter Nichol’s searing play of a modern marriage disrupted by a ‘blast of sexual infidelity’ is technically daring with the two leading characters each portrayed by two actors for public and private thoughts.

Zoe and Samantha play the competing versions of the same innocent character, soon shattered and betrayed in a 25 year marriage she believed to be happy and strong.
Owen Teale and Oliver Cotton play the love rat husband and his alter ego.

When it opened in 1981 at London’s Aldwych Theatre critics recounted a joke about Moses coming down from Sinai with the Commandments and announcing, “First the good news – I’ve got ’em down to ten. Now the bad news – adultery’s still on.”

Samantha’s maiden name is apt – her best known screen role is in the James Bond series, playing Miss Moneypenny, secretary to M. She appeared throughout Pierce Brosnan’s tenure as 007 which began in 1994 and ended in 2002 with Golden Eye, Tomorow Never Dies, The World is Not Enough and Die Another Day.

Both signed this sketch for me at the theatre in Juen 2013. 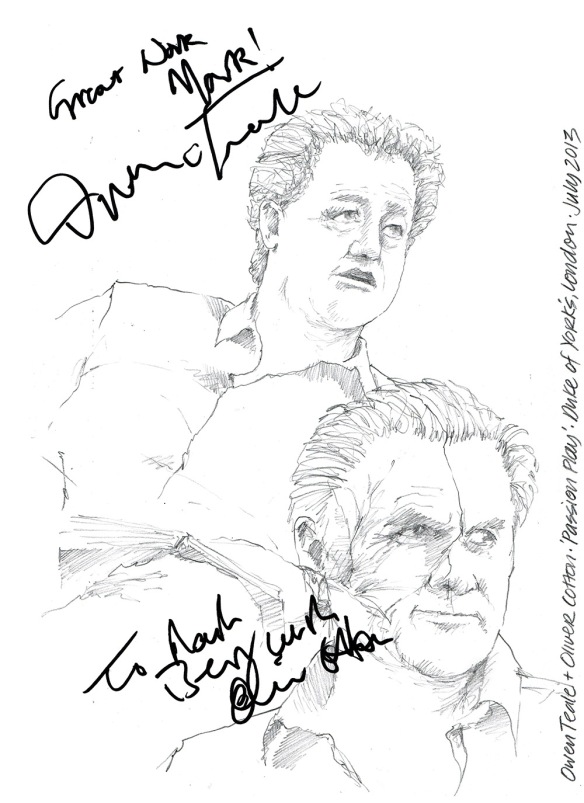 Owen Teale and Oliver Cotton played the same character in the revival of Peter Nichol’s Passion Play at the Duke of York’s Theatre in London’s West End in the middle of 2013.

An initially happy 25 year marriage becomes strained to breaking point when the husband embarks on an affair with a woman half his age.

Owen played the husband (James) opposite Zoe Wanamaker. But each has an identically dressed alter ego, respectively played by Oliver (Jim) and Samantha Bond, who depicts the character’s interior thoughts and feelings.

Owen won the 1997 Tony Award for his performance as Torvald in Ibsen’s A Doll’s House at the Belasco Theatre. Oliver’s prolific stage career was founded on his extensive work at the National during the time Sir Laurence Olivier was its articsic director. He also writes scripts for both stage and screen. They both signed my sketch at the theatre in June 2013.

Griff took over the role of Charles Dicken’s conniving career criminal Fagin pickin’ a pocket or two with his gang of homeless boys. He replaced Omid Djalili becoming the fourth person to portray the loveable rogue in December for six month stint.

Jodie won the BBC TV’s I’d Do Anything to find Nancy for the West End revival in 2008 – a role she played from the opening night in January 2009 until March 2010 plus a two show one off performance on 13 November 2010 filling in for Kerry Ellis.

Griff also returned to Oliver! in December 2010 for a five week start until final curtain in January the following year. I left this black biro sketch at the theatre where both Griff and Jodie signed it for me.