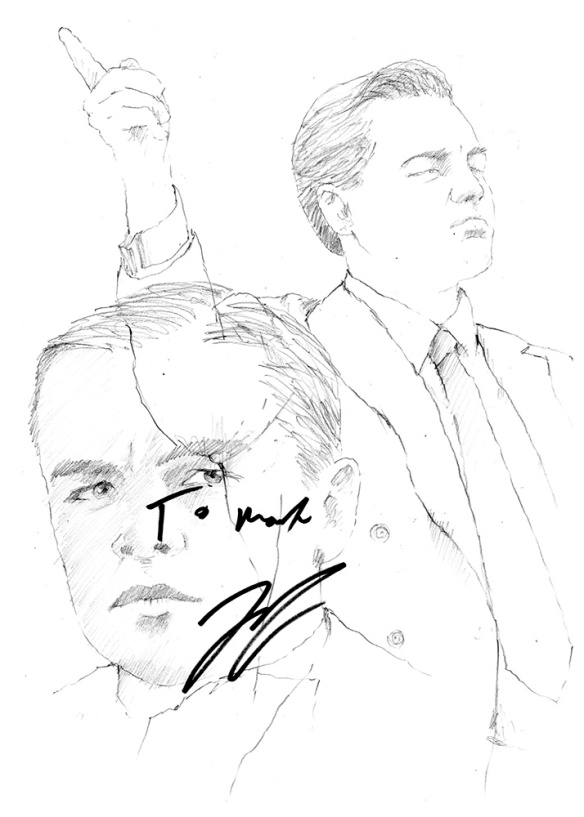 “I have no connection with me during the whole Titanic phenomenon and what my face became around the world. I’ll never reach that state of popularity again.”

Let’s face it, Leo-mania may have passed, but the man can still pull a crowd and on face value, you don’t get much bigger. That face has taken on many guises, not only Jack Dawson, but also Romeo, Danny Archer, J. Edgar Hoover, Amsterdam Vallon, Billy Costigan, Jay Gatsby, Calvin Candie, Howard Hughes and Jordan Belfort.

The last two manifestations I chose to draw – the eccentric and obsessive film director and aviation pioneer Howard Hughes (The Aviator, 2004) and Jordan Belfort, the swindling stockbroker in Leo’s latest The Wolf of Wall Street, which had its UK premiere this week.

Anticipating facing a big crowd, I went to Leicester Square earlier than usual to join the Leo -maniacs. When the sun goes down, the stars come out and the Leonardo constellation is one of the brightest.

Like other famous faces Tom Cruise and Johnny Depp, Leo “does the line,” meaning he goes around the barriers signing for as many people as possible. He didn’t disappoint.

He saw the sketch and said “How cool,” signed his distinctive ‘premiere’ sig and in the hysteria, took time to dedicate it to me, smiled then quickly moved down the line. Very cool – face to face with the real Leo!