Scottish actor Ian McDiarmid’s resumé of rich classical stage roles and critical accolades was elevated into popular culture when he appeared as the Emperor in 1983s Star Wars, Return of the Jedi, and subsequently Senator Palpatine / Darth Sidious in the prequel trilogy.

Ian is currently back on stage in A Life of Galileo, the translation of Bertoit Brecht’s masterpiece by the Royal Shakespeare Company’s writer-in-residence, Mark Ravenhill. The RSC’s production opened last year at Stratford-Upon-Avon before a national tour.

The year is 1609 and the brilliant Italian astronomer Galileo Galilei used the invention of the telescope to discover the ‘eureka moment’ realising the earth orbits the sun. The play’s central focus however it his conflict with the Catholic Church, who denounced him as a heretic and threat to their religious dogma.

Ian signed my sketch at the Rose Theatre, Kingston last week. A Life of Galileo moves to the Arts Theatre in Cambridge this week until 5 April.

Rupert Everett and Freddie Fox proved an inspired piece of casting in Neil Armfield’s critically received revival of David Hare’s 1998 play The Judas Kiss. The production, about Oscar Wilde’s scandal and disgrace at the hands of his young lover Bosie (Lord Alfred Douglas).

It opened at the Hampstead Theatre in September 2012 before a West End transfer to the Duke of York. Rupert’s portrayal of Oscar Fingal O’Flahertie Wills Wilde was recognised in the theatre awards, nominated for an Olivier, longlisted in the Evening Standard and winning the WhatsOnStage Best Actor gong – voted by over 60,000 theatre goers. Both Rupert and Freddie signed my sketch at the Duke’s in January 2013.

Tracie Bennett is best known for her work in the both dramatic and musical theatre, receiving Olivier Awards for her performances in She Loves Me and Hairspray.

In February 2010 she took on the role of Judy Garland in the months leading up to her death, in the first London production of Peter Quilter’s play The End of the Rainbow at the Trafalgar Studios with critical success. Tracie received an Olivier nomination for her performance. The production transferred to Broadway in March 2012 at the Belasco Theatre with Tracie reprising her role, winning the Outer Critics Circle and Drama Desk Awards for Outstanding Actress in a Play and a Tony nomination.

Tracie signed this quick sketch of her in the Garland role at the Olivier Awards in Covent Garden in March 2011.

British actress Amanda Drew is equally at home in a drama or a comedy or for that matter, on stage or on screen. She’s been seen on the small screen in all the major UK TV shows and is a regular on the London boards. Amanda was playing Judy in Nationals THE CURIOUS INCIDENT OF THE DOG IN THE NIGHT TIME at the Apollo, until the roof collapsed last December. The play will resume in the Gielgud next door from 24 June. I  drew Amanda playing the sultry Joy in Jez Butterworth’s PARLOUR SONG at the Almeida Theatre in March 2009. She featured opposite Andrew Lincoln in a story where martial bliss turns into domestic boredom, then a mix of paranoid fantasy, surreal nightmares and dreams of escape follow! Amanda is always very nice to meet and have a chat. She did so on her way into the Duchess theatre in late summer, 2011 for a matinee performance of BUTLEY, signing the sketch in the process.

Olivier-Award winning actress and singer Jenna Russell is currently in the satirical musical URINETOWN, directed by Jamie Lloyd at the St James Theatre in London. This Tony-Award winning Broadway ‘splash’ hit revolves around a city in the future that is inflicted by a terrible drought, where water is like gold. A business tycoon is making a fortune monopolising the public toilets! Jenna who signed this sketch during her run in SEASON’S GREETINGS at the National in 2010, plays Penelope Pennywise and the show runs until 3 May.

One of the brightest new stars shining on the London stage is 25 year old Olivia Vinall. Less than four years after graduating from Drama Studio London she has played three of Shakespeare’s iconic female roles – a path probably predicted in the stars given she was named after one of the Bard’s other famous females – Olivia in Twelfth Night.

Presently portraying Cordelia in the National Theatre’s King Lear, opposite the legendary Simon Russell Beale, she was Desdemona in Othello (also at the National) with Adrian Lester and Rory Kinnear and Juliet in Romeo and Juliet at the Leicester Square Theatre. Nominated for both an Evening Standard Theatre Award and a WhatsOnStage Award for her role as the Venetian beauty who tragically elopes with the older Othello.

Olivia also features in the National’s 50 Years On Stage Celebration with the current theatrical greats. I had the pleasure of meeting the delightful thespian after her Saturday afternoon performance, when she signed this sketch.

I’m constantly drawn to Simon Russell Beale. I’ve sketched him on a number of occasions and will continue to do so. He’s an artist’s dream with such an expressive, animated face. He’s currently performing on the vast Olivier stage at the National Theatre in Shakespeare’s King Lear, directed once again by Sam Mendes.

“Simon’s great art is that he can take a role and turn it until it catches the light. Sometimes he only turns it tow degrees and bang,” Sam is quoted as saying.

It renews a long creative partnership between the two, beginning at the RSC in 1990 with Troilus and Cressida. It has included all the Bard’s greatest roles, but Lear is possibly the big one. It is the seventh Shakespeare play on which Simon has worked with Sam.

He’s an unorthodox Lear as a Stalinesque tyrant, dividing his Kingdom amongst his three daughters. It’s been in the frame for the best part of a decade and finally realised in this extraordinary epic. It’s not Simon’s first Lear, however. He did perform the role as a 17 year old schoolboy at Clifton College.

Simon signed this sketch after the Saturday performance. There are so many other renderings waiting in the wings, given the vast emotional arc he uses to portray the tragic monarch. Watch this space.

Mydidae was written to fulfil a specific brief. DryWrite commissioned BAFTA award-winning writer Jack Thorne to create a play set entirely in a fully functioning bathroom. Phoebe Waller-Bridge and Keir Charles play Marian and David – a couple reaching the first anniversary of a shared personal tragedy. A controversial and intimate exploration of a relationship with its different perspectives and conflicting views when loss and pain can mutate into blame and guilt that delivers a brutal jolt.

Mydidae premiered at the Soho Theatre in 2012 before transferring to the Trafalgar Studios in March 2013.

Scarlett Ingrid Johansson has twice appeared on the Broadway boards. Her debut in Arthur Miller’s A View From The Bridge garnered her a Tony Award in 2010. A hard act to follow, but follow it she did with another acclaimed stage performance, as Maggie ‘the cat’ in Tennessee Williams 1955 Pulitzer Prize winning classic Cat on a Hot Tin Roof at the Richard Rodgers Theatre for a 15 week engagement in late 2012.

Scarlett signed my sketch of her in her role as Maggie last night at the UK premiere of Captain America: The Winter Soldiers at London’s Westfield Vue Cinema. 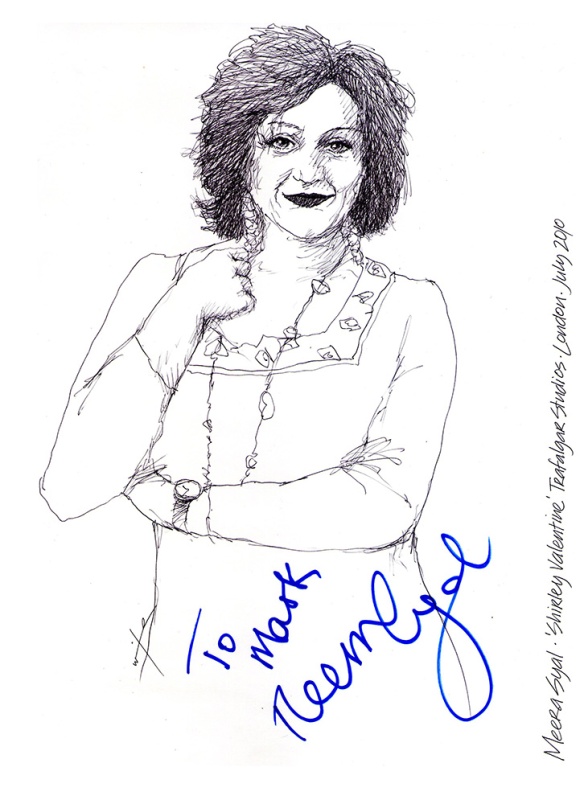 British actress,comedian,writer,singer and producer Meera Syal transformed herself into SHIRLEY VALENTINE at London’s Trafalgar Studios in July 2010. Written by Willy Russell,it follows the monologue of a middle aged Liverpool housewife who finds herself talking to walls as she prepares her husband’s  egg’n chips,wondering where her life has gone. Critic Peter Brown said her performance was ” totally absorbing..keeping the entire audience rivited throughout.” Meera signed my sketch on 29.7.10 at the stage door.