In the immortal words of Scrooge, “A merry Christmas to every-body! A happy new year to all the world! Whoop!”

What better time to post this sketch of the wonderful Welsh actor Rhys Ifans as one of Charles Dickens’ most memorable characters in the Old Vic production of A CHRISTMAS CAROL in London. It’s the ultimate redemption story, the cold-hearted miser who despises the festive season, until the Christmas Spirits fill him with love and joy.

We saw the excellent production a couple of weeks ago and Rhys signed this drawing for me yesterday at the stage door.

After its 2015 Broadway premiere Simon Stephens’ new two-hander HEISENBERG:THE UNCERTAINTY PRINCIPLE has arrived in the West End at the Wyndham’s Theatre. Directed by Marianne Elliot, it is the debut show for her new company Elliot and Harper and stars Anne-Marie Duff and Kenneth Cranham. It’s an 80 minute study of a mismatched couple, riffing on life, love and everything in between. Anne-Marie is Georgie, an American school receptionist in her forties, who jokes she’s an assassin and Kenneth plays Alex, a seventy year old butcher who’s used to being self contained. Both signed my drawing after last Saturday’s evening performance.

Margaret Cho is one of America’s most politically outspoken and savage standup comedians. In his Guardian preview before she embarked on her just completed UK Tour ‘FRESH OFF THE BLOAT’, Rob Walker wrote, “If you have never heard of Margaret Cho, think of the caustic, crude comedy of Joan Rivers, the politically-charged jibes of Bill Hicks and the quick-witted improvisation of Robin Williams – all rolled onto one but with a feisty Korean twist.”

The five-time Grammy and Emmy nominated actor, author and singer-songwriter is a household name in the US. Earlier this year Rolling Stone magazine named her as one of the 50 Best Standup Comics of all time. Openly bisexual, Margaret’s famous for her brazen take on sex and politics. She is also a regular on the small screen, playing the rebellious daughter in a traditional Korean-American household, ALL AMERICAN GIRL and as Teri Lee in DROP DEAD DIVA. She has also appeared in a number of films, including John Travolta’s FBI colleague in FACE/OFF.

Margaret’s last gig on the tour was at the O2 Shepherd’s Bush Empire on Sunday 10 December. The previous day I popped by to drop off a drawing, but it was completely shut, so I fired the enveloped sketch under the stage door and hoped for the best. It arrived back, signed, in the mail on Saturday.

Christian Slater has returned to the London stage in David Mamet’s Pulitzer Prize winning study of real estate sharks, GLENGARRY GLEN ROSS at the Playhouse Theatre. He plays the cut-throat ‘schmoozer’ Ricky Roma, the ‘salesmen’s salesman’ to great acclaim. Christian signed an earlier drawing I did of him in the 2006 London production of ONE FLEW OVER THE CUCKOO’S NEST a few weeks ago and this one as Roma after last Saturday’s evening performance at the Playhouse stage door.

Often called the ‘First Lady of British Musical Theatre’, Elaine Paige returned to the London stage this month as Queen Rat in the pantomime DICK WHITTINGTON at the London Palladium.

After making her West End debut in 1968 as one of the Tribe in HAIR, she won the Olivier Award ten years later for her acclaimed portrayal of Eva Peron in Andrew Lloyd Webber’s EVITA. In 1981 Elaine originated the role of one-time glamour puss Grizabella in Sir Andrew’s CATS. Her song ‘Memory’ became a top 10 hit. She followed that with Florence in CHESS and Edith Piaf in PIAF. After playing Norma Desmond in SUNSET BOULEVARD at London’s Adelphi Theatre, Elaine reprised the role for her Broadway debut in 1996.

I drew this CATS, PIAF, EVITA montage of Elaine and tried on a number of occasions to catch her at the BBC Radio 2 studios, where she records her weekly ELAINE PAIGE ON SUNDAY show, but kept missing her. So I waited at the Palladium’s stage door on Saturday – a plan that proved much more successful, as she arrived for the first matinee.

Continuing my drawings from the hit Disney musical THE LION KING after my wife and I saw the West End production at the Lyceum Theatre last month. It’s an annual tradition for us to catch something Shakespearean for our wedding anniversary and since the show is loosely based on HAMLET, we decided to take in a Sunday matinee.

English stage and screen actor George Asprey plays the murderous villain, Scar, who is even more loosely based on Shakespeare’s main antagonist King Claudius. George’s extensive television credits include appearances in THE CROWN (Seasons 1 & 2), THE BILL, HOLBY CITY and THE DYING OF THE LIGHT for which he was nominated for a BAFTA Award in 1994. His notable stage roles were Billy Flynn in CHICAGO, Rusty Charlie in GUYS & DOLLS for Birmingham Rep and Rolf in THE SOUND OF MUSIC at Sadler’s Wells and the UK Tour.

I managed to catch up with George to sign my sketch last Tuesday, when he arrived for the evening performance. 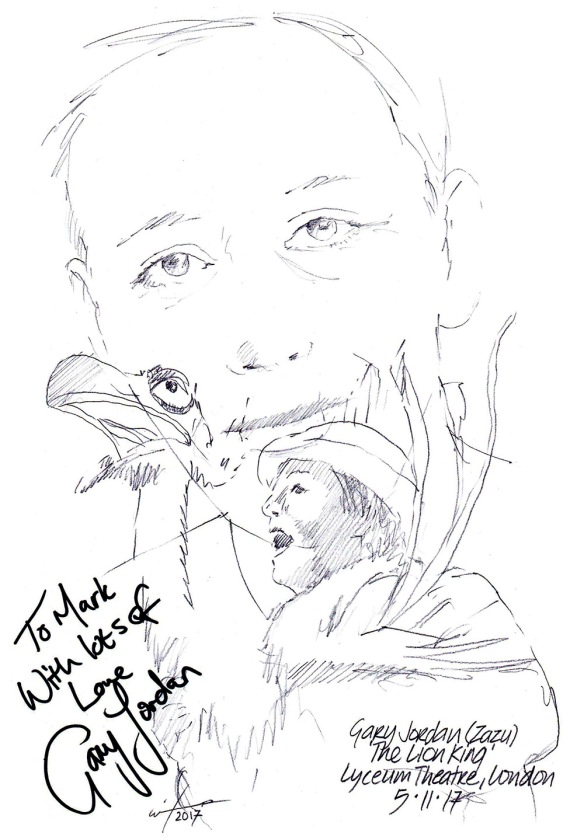 Every November, to celebrate our wedding anniversary, my wife and I take in a bit of the Bard – something Shakespearean or a show based on his works. This year we chose a Sunday matinee of the multi award-winning musical THE LION KING, based on the celebrated 1994 Disney animated film which in turn was inspired by HAMLET. Celebrating its 19th year at the Lyceum Theatre in London’s West End after opening on Broadway in 1997, winning six Tony Awards, the show has seen 24 global productions, seen by over 90 million people. I decided to sketch a few of my favourite characters.

The first is Zazu, the much-loved red-beaked hornbill, who acts as the King’s adviser ‘Mufasa’s little stooge’ or Polonius in the Shakespearean context. Played by Gary Jordan, who said in a recent interview that he “loves every minute of it’, who not only has to act and sing, but has to be a puppeteer as well. “I have to combine the performance for the bird and the actor to make them look like one.”

Gary himself is in his 20th year in theatre with an impressive resume, including AVENUE Q, GREASE, and ANYONE CAN WHISTLE. He is also a highly regarded pianist and musical director working with drama schools and cabarets around London. I met him at the stage door after last Saturday’s matinee where he signed my drawing.

OSLO tells the story of two maverick Norwegian diplomats who coordinated top secret talks that inspired seemingly impossible friendships leading to the groundbreaking Oslo Peace accords in 1993 between the Palestine Liberation Organisation and the State of Israel. JT Rogers play opened last year at the Lincoln Centre in New York, winning the Tony Award. The London production opened at the National Theatre for a brief and sold out run before transferring to the Harold Pinter Theatre in the West End. Toby Stephens plays Terje Rod-Larsen and Lydia Leonard, his wife Mona Juul, the Norwegian diplomats who orchestrated the Peace accord between Yitzhak Rabin and the PLO’s Yasser Arafat. Both Toby and Lydia signed my sketch a couple of weeks ago at the Pinter stage door. 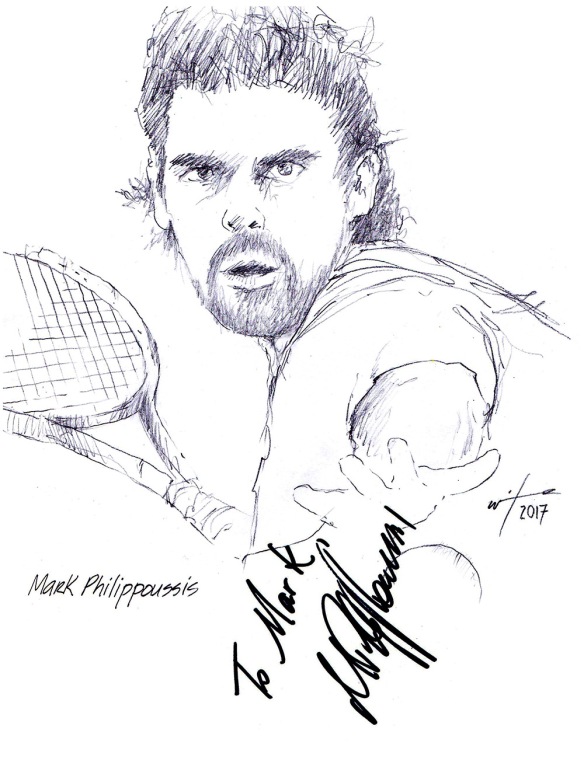 Nicknamed ‘The Scud’ because his serve was once regarded as one of the fastest in the game, resembling a scud missile, retired Australian tennis ace Mark Philippoussis returned to London’s Royal Albert Hall last week for this years final Champions Tour event.

While he didn’t win a Grand Slam, he did reach the final of the US Open, losing to compatriot Pat Rafter in 1998 and Wimbledon in 2003 where he was beaten by Roger Federer. He won 11 career titles and reached No. 8 in the world rankings in 1999. Mark was also instrumental in Australia winning the Davis Cup in that year and again in 2003, winning both deciding rubbers.

He signed my sketch at the RAH stage door last Thursday evening before his opening match with former No.1 Juan Carlos Ferrero.