Award-winning London-based Irish actress Elaine Cassidy has spent most of her stage time over the past four years at the Donmar Warehouse and the majority of that under the direction of Lyndsay Turner in Brian Friel plays. In 2014 she appeared in the late, great Irish dramatist’s – often referred to as the Irish Ckekov – adaptation of Russian novelist Ivan Turgenev’s best known work, FATHER AND SONS and returned this year in his haunting 1979 piece ARISTOCRATS, a play about a generation whose past threatens to obliterate its future, which finished its two month run last weekend.

It’s the first major revival of this minor modern classic since Brian’s death three years ago. In between the two productions, Elaine stepped in at the 11th hour to replace Michelle Dockery in LES LIASIONS DANGEREUSES. Central to the ARISTOCRATS are the damaged O’Donnell sibblings, who gather at their crumbling family home, Ballybeg Hall in Donegal for the marriage of sister Claire. It’s a far cry from the former glory days. Elaine played Alice, an alcoholic, described by Paul Taylor in his Independent review as ‘elegantly sozzled’ with ‘brutal fits of self- awareness.’

She signed my sketch at the Donmar during the final week of the production.

“James Norton and Imogen Poots are brilliant,” wrote Andrzej Lukowski, the theatre editor for Time Out in his review of Amy Herzog’s 2011 play BELLEVILLE, which has just completed its run at London’s Donmar Warehouse. James and Imogen play uprooted American newlyweds Zack and Abby living in Belleville, the Bohemian district of Paris in a romantic dream gone sour. The Independent’s PaulTaylor agreed, “The acting’s terrific.”

I managed to catch up with James and Imogen at the Warehouse, where they signed my sketch. 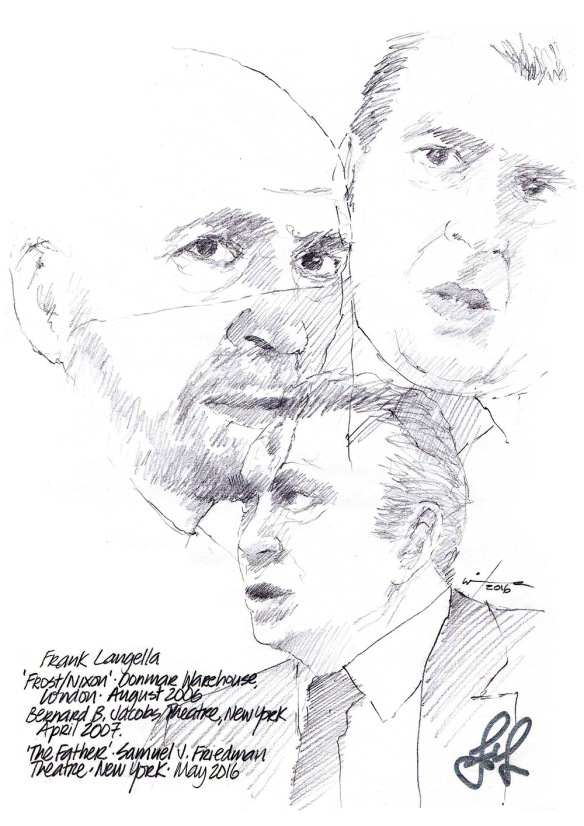 Frank Langella has won four Tony Awards. His latest was for his role as Andre in Florian Zeller’s THE FATHER this year. He played Richard Nixon, the only US President to resign the office in Peter Morgan’s FROST/NIXON at London’s Donmar Warehouse and the Gielgud before transferring to Broadway’s Bernard B Jacobs Theatre in April 2007, winning his third Tony. He reprised the role in the film version the following year, earning Oscar, Globe,SAG and BAFTA Award nominations.

I sent Frank this sketch of him in both roles while he was in THE FATHER at the Samuel J. Friedman Theatre last month and he signed it with his unique abbreviated initials graph.

Nina Sosanya quickly signed a portrait sketch I drew of her after the final televised performance of James Graham’s THE VOTE on Election night in May 2015. She actually apologised for the hasty sig as she literally signed on the run to catch the cast (which numbered over 50) bus for the final night function.

Nina’s  a familiar face on the small screen, appearing in such shows as HUSTLE, VERA, LEWIS, JONATHAN CREEK, DR WHO, SILENT WITNESS and was a regular on the comedy-drama series TEACHERS. She was also part of the all-star cast in the Christmas-themed romantic comedy movie LOVE ACTUALLY.

I decided to try again and redrew the same portrait, adding Nina in character as one the assistants at the fictional polling station and got my opportunity to get a graph and dedication in less chaotic circumstances last month, when Nina returned to the Donmar in Nick Payne’s ELEGY. And here it is. 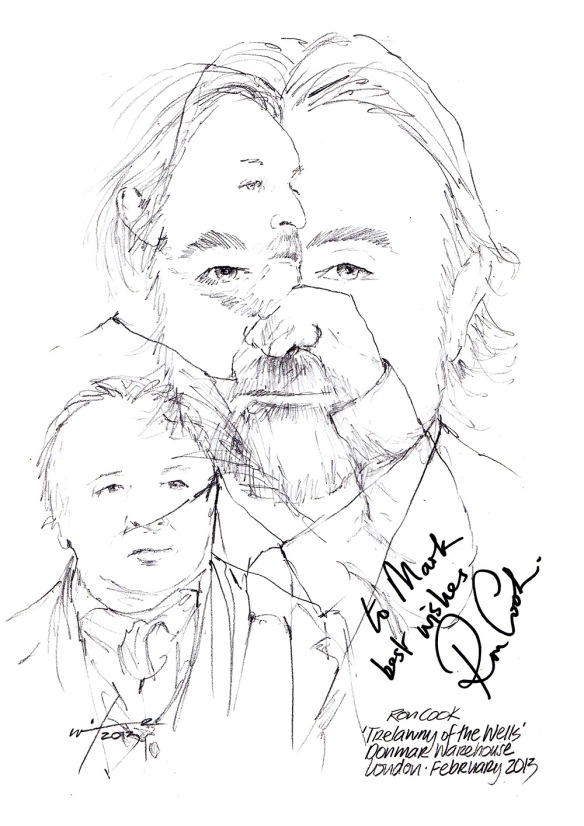 Patrick Marber’s adaption of Pinero’s ‘ love letter to theatre,’ TRELAWNY OF THE WELLS, directed by Joe Wright in the early Spring of 2013, at the Donmar Warehouse in London’s Covent Garden. Included in the outstanding cast was the impressive and very busy Ron Cook – so busy he played two roles in this production. Opening the 1898 comic play he appears in drag as the ‘theatrical landlady’ described by Charles Spencer in The Telegraph as a “brilliant comic coup” before settling into his role as the “superb” crusty old judge Sir William Gower.

Ron is always very friendly and obliging at the stage door. He signed this drawing for me at the Trafalgar Studios earlier this year when he was appearing in THE HOMECOMING. He returns to the Donmar in June in FAITH HEALER.

Northern Irish actress Michelle Fairley has returned to London’s  Donmar Warehouse for it’s season of  Abi Morgan’s power play Splendour. In 2008 she played Iago’s wife Emilia in Othello at the same, intimate Covent Garden venue. It was her lauded portrayal that impressed the Game of Thrones writers , who saw her performance and offered her the role of the ‘maternal Boadicea’, Catelyn Stark in the hit HBO TV series. Inspite of an impressive list of small screen credits, Michelle says that theatre is her preference, hence her return to the boards. She is part of an all-female quartet, which includes Sinead Cusack, Zawe Ashton and Genevieve O’Reilly, playing the best friend of the wife of a dictator whose unnamed regime is collapsing around him.

London-based since 1986, Michelle has openly stated her dislike for Hollywood,  where she has worked on a number of projects, including her recurring role as Dr. Ava Hessington in Suites. With that recognition comes the usual  increased attention-something I got the impression Michelle isn’t comfortable with. She seemed a little more happier to sign my sketch at the theatre than the piles of glossy 8×10 Thrones stills the swarm of dealers gave her to graph.

The Vote at London’s Donmar Warehouse dramatised the frantic last 90 minutes in a polling station in London (a hastily converted primary school gym).

It featured an all star cast of 50 – as The Guardian’s Michael Billington called it, “as many famous names as a charity gala” – and was broadcast live on Election night on More4. Nina Sosanya plays one of the two polling clerks (the other is Catherine Tate)

This is literally a ‘graph on the run and down a dark alley. After the Election Night performance, the cast left for the after party through the back door to an awaiting bus that was parked at the end of an alley way opposite. A dimly lit alley way at that.

Nina was one of the last to leave and the ‘assistants’ were hurrying everyone along.  She went to sign my sketch, but was kept kept moving. Plus she was carrying a lot of stuff. So no arms, no light, moving target… and a security person between me and Nina. This was not looking promising. I managed to giver her a pen and tried to keep the drawing at the ‘write’ distance and as still as possible moving at 100mph…. After a brief period of kinetic combining Nina handled me the pen back and said “sorry… it’s not a very good one.” But nevertheless . A true collector will try and get variations of a signature and this was certainly a variation. It allows me to collect another in less trying circumstances. 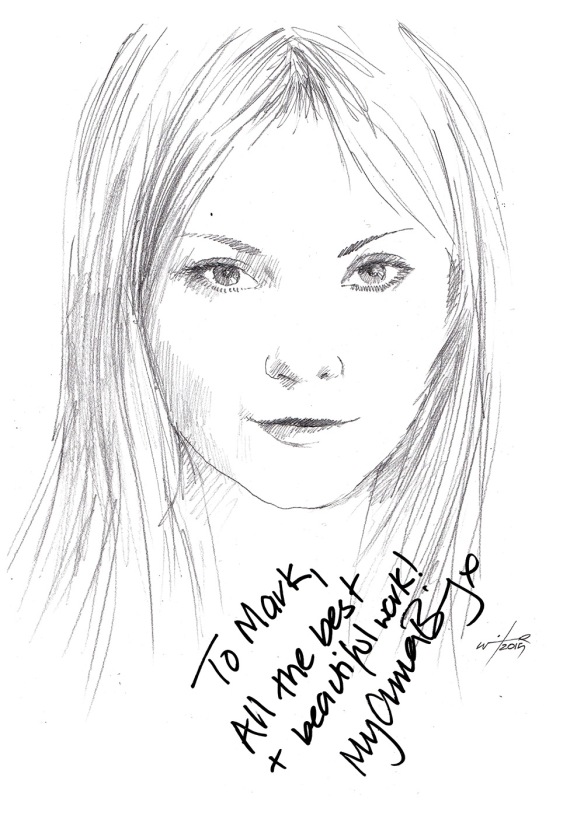 British based Swedish actress MyAnna Buring played Tanya of the Denali Coven in the hugely popular Twilight Saga: Breaking Dawn Part I in 2012, and has had significant supporting roles, including BBC drama series Blackout and Ripper Street; she also joined the cast of Downton Abbey, playing the role of maid Edna Braithwaite in the 2012 Christmas special episode and the fourth season.

This month she hit the London stage as part of an all-star cast of fifty, including Dame Judi Dench, Timothy West, Mark Gatiss, Catherine Tate and Nina Sosanya of The Vote at the Donmar Warehouse.

Conceived by James Graham and director Josie Rourke, the play is set in a London Polling station during the final 90 minutes before the polls closed.

It shines light on the diverse, diligent and often hilarious individuals who turn the unglamorous settings into places where history is made. It was broadcast live after two weeks of previews on More4 on 7 May, the night of the General Election.

It’s such a large cast that half of them occupied a changing room across the road from the stage door alley way. I found out from one of the other ‘graphers that MyAnna was in that half, so positioned myself in the dark alley with my sketch. She was lovely and liked the sketch enough to sign it and write a nice comment. I would vote for her.

Closer – Patrick Marber’s study about the brutality of modern relationships, gets its first major revival at London’s Donmar Warehouse and has already sold out.

When it premiered at the National Theatre in London in 1997 and the Music Box Theatre on Broadway in 1999, Closer won Olivier, Evening Standard and New York Drama Critics Circle Awards and was nominated for a Tony for Best Play.

Directed by David Leveaux, it stars Rufus Sewell, Nancy Carroll, Oliver Chris and Rachel Redford as the quartet caught up in “an agonised sexual and emotional square dance,” according to The Telegraph.

The Donmar website sums the play as: “Dan rescues Alice. Anna photographs Dan. Larry meets Anna online. Alice rescues Larry. This is London at the end of the twentieth century, where lives collide and fates change in an instant.”

According to the Evening Standard, Marber writes perceptively about our obsession with appearances, the perils of honesty and the damage we can do to others in the name of love. Holly Williams in the Independent summarises it as “hook ups, fuck ups and break ups”.

The cast all signed my sketch after Saturday’s matinée, Closer runs until 24 April 2015

Eugene O’Neill’s epic Pulitzer Award-winning play Anna Christie, about love and forgiveness charts one woman’s longing to forget the dark secrets of her past as she is reunited with her father, an old Scandinavian salt who had exiled her fifteen years earlier.

Winner of the Olivier Award for Best Revival, Rob Ashford’s nautically realistic production played London’s Donmar Warehouse in the late summer of 2011 with Jude Law and Ruth Wilson in the lead roles.

Michael Billington in his Guardian review said, “The acting matches the production’s visual power. Ruth Wilson, following in the footsteps of Greta Garbo on screen and Natasha Richardson on stage… capturing with seeming effortlessness the contradiction inside Anna. Law, in the best performance I’ve seen him give is also excellent as the brawny lover… conveys muscular innocence of a man who has a rolling nautical gait… ”

Both Jude and Ruth were nominated for Oliviers with Ruth winning her second, having previously picked up the award for Best Supporting Actress as Stella in A Streetcar Named Desire also at the Donmar. This black biro sketch as based on rehearsal shots for the play which Ruth and Jude kindly signed for me.