Evelyn Hoskins took on the title role in the musical revival of Carrie, the role made famous by Sissy Spacek in the 1976 high school horror film at London’s Southwark Playhouse last month.

The Guardian’s Lyn Gardner wrote, “A mesmerising performance by Evelyn Hoskins as  the flame haired teenage avenger fires this revival of the RSC’s slaughterhouse Cinderella”

The show has a notorious history. Eager to repeat the success of Les Miserables, the Royal Shakespeare Company produced a stage adaption of Stephen King’s novel and the iconic movie version by Brian De Palma. It opened in Stratford and then transferred to Broadway, failing in both.

This was the first London revival, returned, reworked, revised, rewritten and “reborn in style” wrote Rebecca Hawks in The Telegraph. The story’s simple – a high school misfit with an abusive and religious mother, uses telekinesis to punish her tormentors.

Director and choreographer Gary Lloyd said “Southwark developed a song reputation for making things work that didn’t originally.” And by all accounts he got it right, with enthusiastic support from critics and theatre goers alike. “The result is bloody marvellous in every sense” wrote Mark Shenton in London Theatre.

Not only did Evelyn suffer bullying and harassment by her school peers, and being drenched in stage blood nightly – twice on matinee days – she was subjected to signing my sketch. What some actors have to do for their art… and mine! 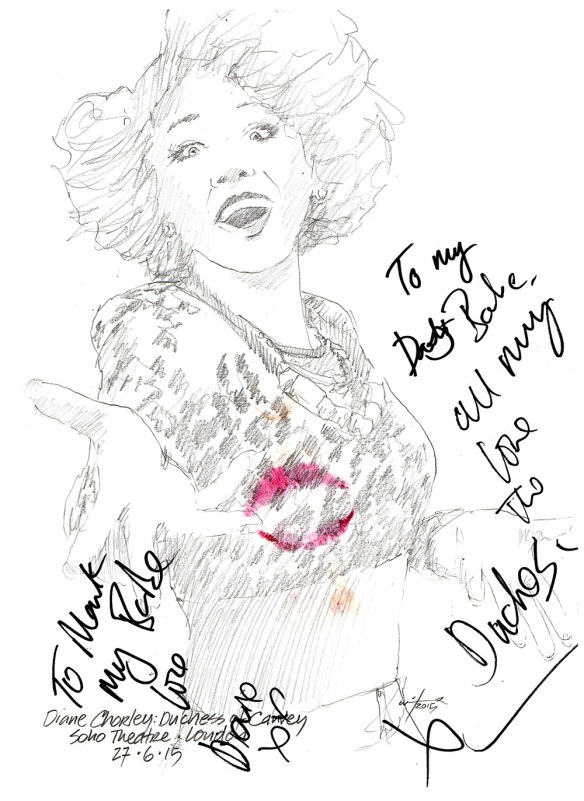 This is the first time one of my drawings has been kissed! Diane Chorley, the legendary Duchess of Canvey, former owner of the celeb-magnet 80s Essex nightclub The Flick and ex-con had just finished her final performance of a two week run at London’s Soho Theatre on Saturday night.

The place was humming – inside and out – as the streets and establishments throughout Soho were fuelled with revellers after the Pride March earlier in the day.

I stood by the ticket office door for strategic and safety reasons. When Diane, sipping on a lager, came out to take in the sights (one of which was my sketch) she gasped.

“Oh babe… wow! Did you do that? Wonderful,” she signed it and inscribed it and then baptised it with a kiss and beer. Now that’s lip service. A truly unique experience and addition for the collection. Dubbed the Duchess of Canvey by David Bowie, Diane describes her life on her website as:

“I was born in Canvey on the coldest day of the year. Mum said I was steaming when I came out. She was a good woman, hands like iron files, teeth like crackling. My father was a Hodd Carrier. Silent as bread, … never said a word. Turns out he was having an affair with a chiropodist from Billericay. Mum found out and killed him. Literally… Mum got life.”

Left to look after her younger brother, Diane resorted to some drug dealing for survival. She was eventually locked up and the nightclub shut down. Her show is a mixture of music accompanied by her equally famous  band The Buffet, and comic tales recounting her troubled days of infamy and fall from grace.

I read in Time Out that in order to handle being mobbed by insatiable fans, the Soho Theatre did look at the cost of a water cannon for crowd control. It was a toss up between that and a cold spread for The Buffet and they all agreed there was less chance of the venue getting sued over a crudité platter. I was pleased about that. 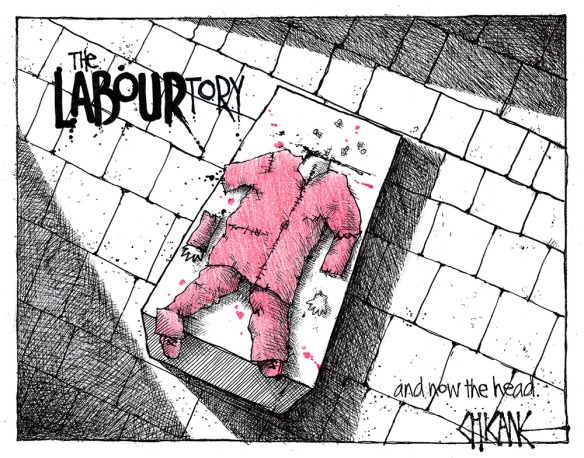 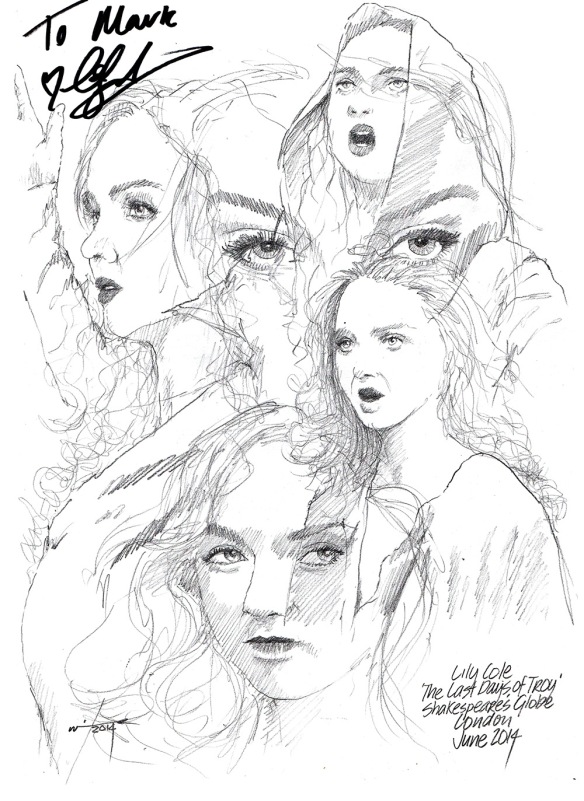 Staged last summer at Shakespeare’s Globe, following a run at Manchester’s Royal Exchange Theatre, it has been described by some as a a “highlights package” of Greek history.

The Last Day’s of Troy completes Homer’s Iliad with award winning poet and author Simon Armitages dramatisation, bringing the war to a brutal conclusion. It combined the essentials of Homer’s Iliad, bits from his Odyssey and elements from Virgil’s Aeneid.

Lily played Helen of Troy, the most beautiful woman in the world according to Greek myth. While technically not her stage debut, it was her first conventional production.  She previously appeared in the Old Vic’s annual 24 Hour Plays Celebrity Galas in which a group of high profile performers work with writers and directors to create a line up of new plays in just 24 hours.

“The former model, now a humanitarian campaigner is suitably enigmatic. Cole’s performance is deliberately restrained as she glides around the stage in an almost ghostly fashion… her gracious movement and distant stare are just what’s required,” wrote Henery Hitchings in the Evening Standard.

Some in the autograph game have found the same demeanour off stage, but I’ve always found Lily to be pleasant and accommodating on the few occasions I have met her. There’s a big difference between ‘racking’ her with 20 8x10s and asking her to sign a theatre sketch.

Juliette first appeared at the Barbican in 2012 in MADEMOISELLE JULIE, an updated version of August Strindberg’s MISS JULIE. She made her London stage debut in 1998 with the production of Luigi Pirandello’s NAKED at the Almeida Theatre. In 2000 she appeared in Harold Pinter’s BETRAYAL on Broadway, earning a Tony award nomination. Eight years later she performed on the National theatre stage in the collaborative piece IN-I with Akram Khan.

Juliette is always a good signer. I had the pleasure of meeting her at the Curzon Cinema Mayfair a few years ago and she was a delight and signed a quick portrait sketch for me. This ANTIGONE study was left at the theatre for her and it came back signed and dedicated. Merci beaucoup Juliette!

Award-winning performer and writer Juliette Burton’s solo show LOOK AT ME is an uplifting docu-comedy celebrating body confidence and beauty diversity. It received 5 star reviews from the national press at last years Edinburgh Fringe Festival, following on from her acclaimed debut show WHEN I GROW UP in 2013.The publicity blurb stated that ‘Juliette’s appearance has changed over the years-she’s been a size 4 and a size 20 and just about everything in between”. As an ex-BBC broadcast journalist before switching to comedy,her material is based on exhaustive research. The show incorporates footage of Juliette walking around London in various disguises, including a man, an obese person, an elderly person, dressed-up in alluring attire and in a hijab to test how appearance changes perceptions. Can changing our outsides change who we are on the inside? Is what we appear to be who we really are?

‘Perception is a funny thing…and ‘funny’ is a strange thing to perceive”, wrote Juliette. “As a comedy writer and performer I like making fun of things that I feel angered or frightened by”.

Fellow comedian and comedy writer Mathilda Gregory reviewed the show for the Edinburgh Fringe Guru website and said, “This show succeeds ( and oh, it does succeed) on Burton’s infectious charm. Her performance is totally delightful. I didn’t want to say goodbye to her at the end of the show and it’s her charm, alongside her brutal honesty in revealing her own body battles that make this  show truly remarkable”.

Juliette works closely with a number of organisations, including the facial disfigurement charity Changing Faces,the body image group B.O.D.Y,the eating disorder charity B-eat and she is a spokesperson for the Be Real-Body Confidence for Everyone campaign.

LOOK AT ME  ran for two nights last week at the Leicester Square Theatre in London, where I left this drawing, which Juliette returned, signed and inscribed. She’s appearing at various places around the UK, so go  ‘look at her’ at a venue near you.

Known as Cressy to her friends, British actress Cressida Bonas has been described by movie mogul Harvey Weinstein as a “fantastic” acting talent after her debut in Tulip Fever due out later this year. The Burberry model made her theatrical debut in 2014 at the Hay Festival in There’s a Monster in the Lake which was also staged at the Vault Festival in January 2015.

Earlier this month she appeared as Laura in the solo play An Evening With Lucian Freud by Laura-Jane Foley at London’s Leicester Square Theatre, receiving rave reviews. It tells the story of the days when Laura was a PhD student who became a friend of the late artist.

Prince Harry showed his support for his former girlfriend when he was spotted in the audience at one of the performances.

I had to fight the paps and autograph dealers on the first night performance, but managed to get near Cressida and she signed and dedicated this sketch, before quickly leaving the throng.

Twenty year old Australian and world number 28 Nick Kyrgios is one of the rising stars of men’s tennis. He stunned Wimbledon last year beating the then world number one Rafa Nadal, reaching the quarter finals at SW19. I was there that day and did a quick sketch, left it at the players’ entrance, not thinking it would be returned, though it was (and signed).

This year’s grass court season is well underway and I met Nick after his practice session at the Queen’s Club last Saturday… As you would expect, he was very popular, not least with the kids and their sharpie ruining large tennis balls.

I gave him my pen to sign this sketch, when one spectator remarked, “oh, it looks like Pavarotti signing!”. NOT helpful, unless of course Nick’s a big Pavarotti fan. Either way, he liked it and signed.

Playwright Jez Butterworth and director Ian Rickson have formed a formidable team and are considered one of contemporary British theatre’s great collaborators. Jez’s debut play, Mojo, the black gangster comedy set in a Soho nightclub in the 1950s, premiered at London’s Royal Court Theatre in 1995, directed by Ian Rickson who became the resident artistic director from 1998 – 2006, replacing Stephen Daldry.

They have been friends and collaborators ever since, with Ian directing all of Jez’s plays. That includes the smash hit Jerusalem, that was a runaway success at the Court, on West End and Broadway.

I love Jez’s writing and am a huge fan of Ian’s direction. They are both very likeable chaps; always engaging and obliging.

I drew this sketch of Ian and Jez in rehearsals for Mojo, hoping to get both to sign it on press night in November 2013. I managed to get Jez, but couldn’t find Ian, so figured he’d be around through the season. Whenever our paths did cross over the next two years, I didn’t have the sketch on me.

It wasn’t until press night of his most recent play The Red Lion at the National’s Dorfman Stage last week that I had a chance. I had to politely excuse myself at the official gathering in the foyer after the performance. He was his usual friendly self, liked the sketch and happily signed it.

Several of the world’s greatest opera stars returned to the Royal Opera House to bid farewell to the final staging of John Copley’s La Bohème, notably Russian soprano Anna Netrebko as Mimi and Maltese tenor Joseph Calleja as her lover Rodolfo. Puccini’s weepie has had 26 revivals and well over 200 sold out performances.

It’s one of the most popular classics and the Royal Opera’s best loved staging, regularly revived since its opening night in 1974 and now for the last time. Anna and Joseph’s final performance was televised as part of ROH’s Live Cinema season to selected locations across the UK, on 10 June. I actually saw part of it on the big screen at Trafalgar Square – the affecting duet in Act 3 between Anna and Joseph.

“Calleja is passionate, lyrical, beautifully impassive. Netrebko sounds glorious and acts with detailed naturalism that can be startlingly effective,” wrote Tim Ashley in The Guardian.

I left a drawing at the ROH stage door for Anna to sign on her final night and it came back, written in gold ink… nice touch.