American dancer Beatriz Stix-Brunell is a soloist at the Royal Ballet in London, but her high profile career path did not follow the predictable school-to-company route.

Beatriz grew up in New York city and began her training at the School of American Ballet. At 12 she auditioned for the Paris Opera Ballet School, being one of the “petits rats” for a year and ranked top of her class. After that she returned to New York and learnt privately with Fabrice Herrault.

British contemporary ballet choreographer Christopher Wheeldon put Beatrix on the professional map when she joined his company Morphoses when she was just 14. In 2010 he resigned and is now Artistic Associate at the Royal Ballet, where Beatrix joined as an Artist also in 2010. He premiered a full length ballet Alice’s Adventures in Wonderland in 2011 – the first at the Royal for over 20 years. Alice, the original protagonist in Lewis Carroll’s novel is a child, in the ballet, however, she is a teenager beginning her first romance.

She performed a principal role for the first time when she stepped in to play Alice, at the last minute after a principal was injured last season. She revived the role this season which complete a sell out run this month.

Beatriz signed this sketch of her as Alice at the Royal Opera House this week. 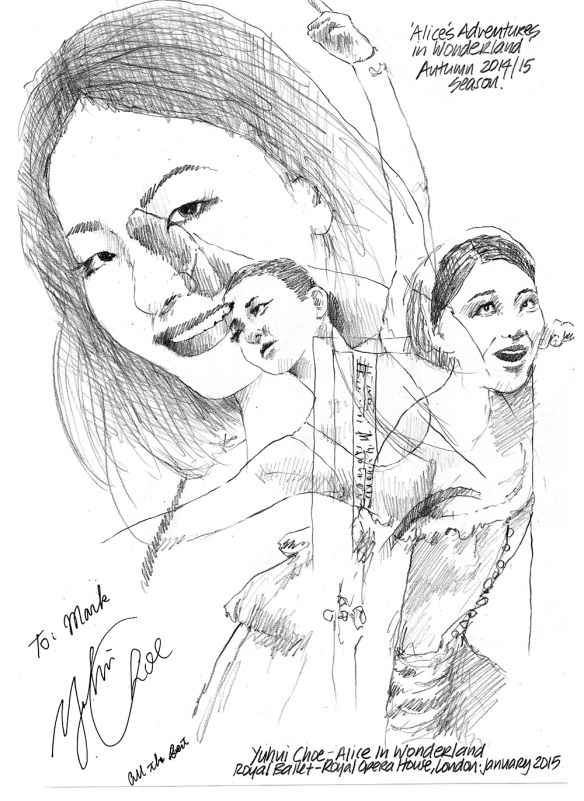 Popular Japanese-born Korean dancer Yuhui Choe is a First Soloist at the Royal Ballet in London.

She studied at ballet school in Japan from age 5-14 then won a Prix de Lausanne Apprenticeship in Paris before joining the Company as an Artist in 2003. She was promoted to First Artist in 2006 and First Soloist in 2008 dancing the Sugar Plum Fairy in The Nutcracker and created one of six female roles in Wayne McGregor’s INFA with music by Max Richter.

The Guardian chose Yuhui as a dancer on their “hotlist” of rising stars to watch in 2009, stating, “She radiates joy in the purest sense”.

Boston-born American ballerina Sarah Lamb joined the Royal Ballet in August 2004 as a First Soloist and was promoted to Principal in 2006.

She is one of the Royal’s busiest performers due to her unusual versatility.

“To the classics, she brings a crystalline technique and an almost old-fashioned, theatrical glamour; in the more contemporary repertory, she’s audacious, clever and fast,” wrote Judith Mackrell in The Guardian.

Sarah kindly signed this sketch of her in the title role from the recent Royal Ballet production, ‘Alice’s Adventures in Wonderland’, at the Royal Opera House in London. 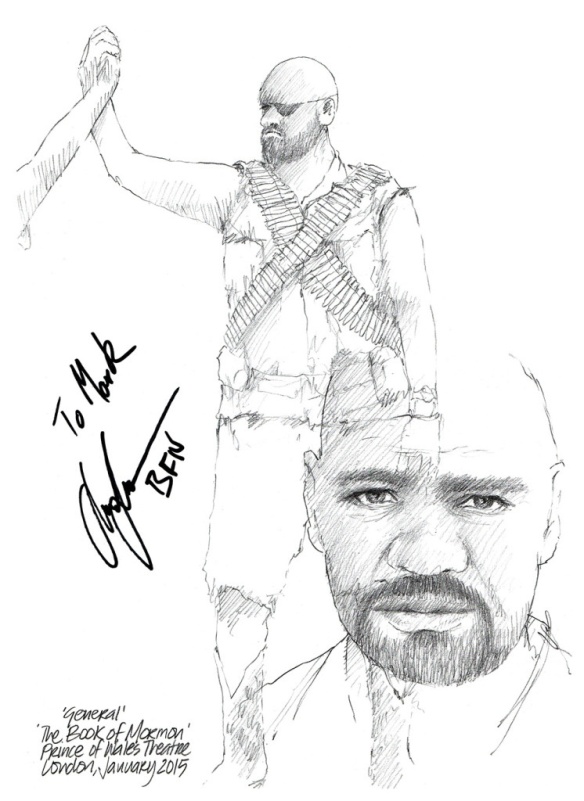 Gentle giant Chris Jarman is one of the nicest people in the theatre business. The complete opposite to his character, General Butt Fucking Naked in the hugely popular The Book of Mormon at London’s Prince of Wales Theatre.

Chris plays a Ugandan villages murderous despot who is obsessed with female circumcision, because his paranoia has led him to believe that all of the clitorises in the village will ‘power up’ and destroy him. I caught up with him at the stage door after Saturday’s matinee.

Chris added the initials BFN in reference to his character, not ‘Bye For Now’…. or maybe both! 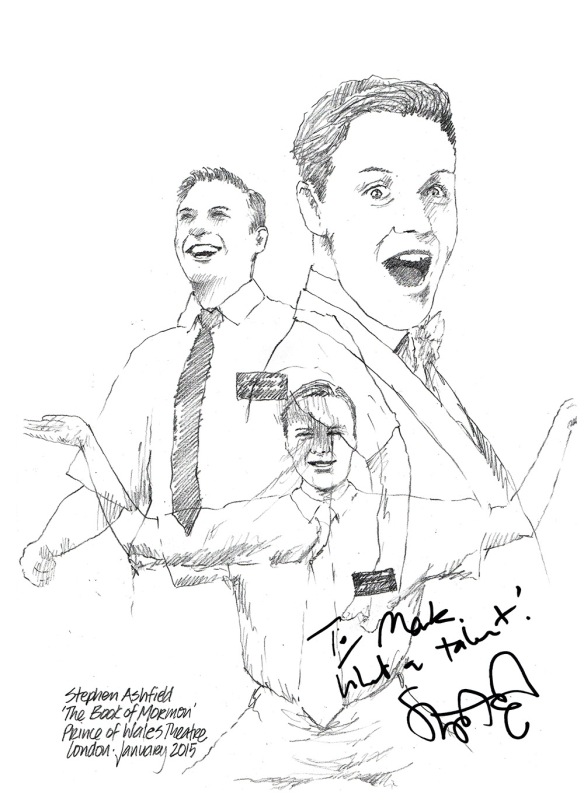 Scottish born actor Stephen Ashfield continues to delight London audiences as the camp Elder McKinley in the outrageous smash hit musical The Book of Mormon – the hottest ticket in town at the Prince of Wales Theatre.

“Elder McKinley is a really nice guy who has some issues,” Stephen said.

A career defining performance that earned him the Olivier Award after star turns as Emmett in Legally Blonde and Bob Gaudio in Jersey Boys. Stephen won Best Supporting Actor in a musical at the WhatsOnStage Theatregoers’ Choice Awards for both Mormon and Jersey Boys.

Not only did Stephen sign the sketch, I also got his family’s approval at the stage door after Saturday’s matinée performance. 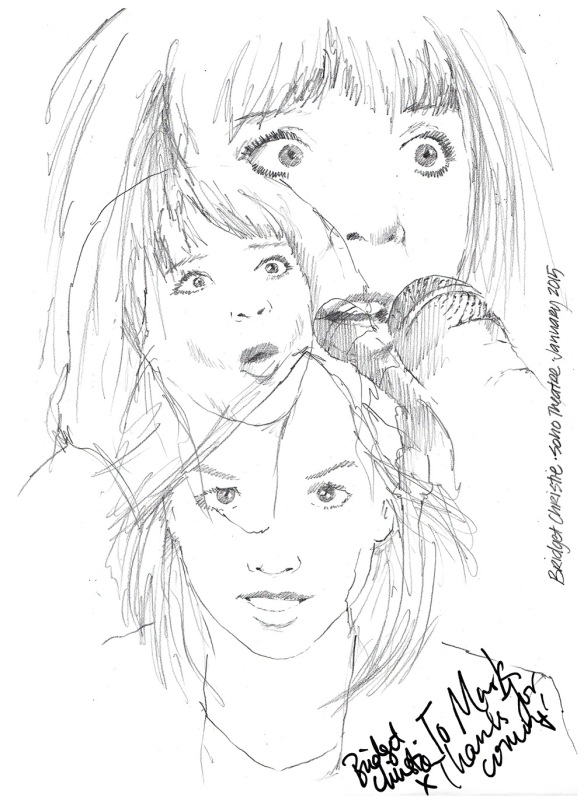 Award winning British comic Bridget Christie is popular – very popular… so popular in fact that her latest show An Ungrateful Woman at London’s Soho Theatre was completely sold out. It’s a common theme for all Bridget’s performances wherever she goes, but she will be back at the Soho for five nights in early March, so get in now!

Her accolades are numerous, including the Edinburgh Comedy Award for Best Show for A  Bic For Her which also won the South Bank’s Sky Arts Award for Best Comedy and the top gong at the 2014 Chortle Awards. It also became the top selling comedy show at the Soho. Her own Radio 4 Bridget Christie Minds The Gap won the prestigious Rose D’or Award for Best Radio Comedy and the Chortle for good measure.

Catching up with Bridget is just as tough as getting a ticket for her shows! I drew this quick sketch let year and have missed her on a number of occasions, so I was determined to get Bridget during her latest run at the Soho. After the show I positioned myself between the stairs from which the audience and the talent leave the downstairs stage and the bar. Bingo! 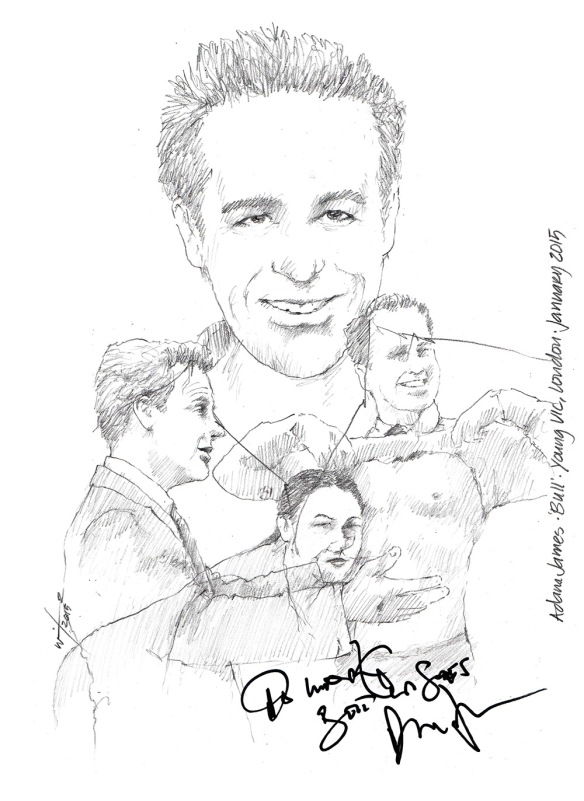 Adam James reprises his role as the silkily offensive Tony in Mike Bartlett’s 55 minute four-hander Bull in the Maria space at the Young Vic Theatre. His character ruthlessly gangs up with Isobel (Eleanor Matsuura) on Thomas (Sam Troughton) to ensure Thomas is chosen by their older boss (Neil Stuke) for the chop, west in an unspecified office setting.

It was inspired when the playwright watched a bullfight in Mexico, one of the last surviving examples of ritual public slaughter. “To see something you really disapprove of, but it activates something primal and unsanitised,” he said. Mike won the 2013 National Theatre Award for Best New Play.

Cast members Adam, Eleanor and Sam originated their roles at Sheffield’s Crucible Theatre in 2013, transferring for a run off-Broadway in New York in April, before making the London premiere this year.

Bull continues at the Young Vic until 14 Feb. 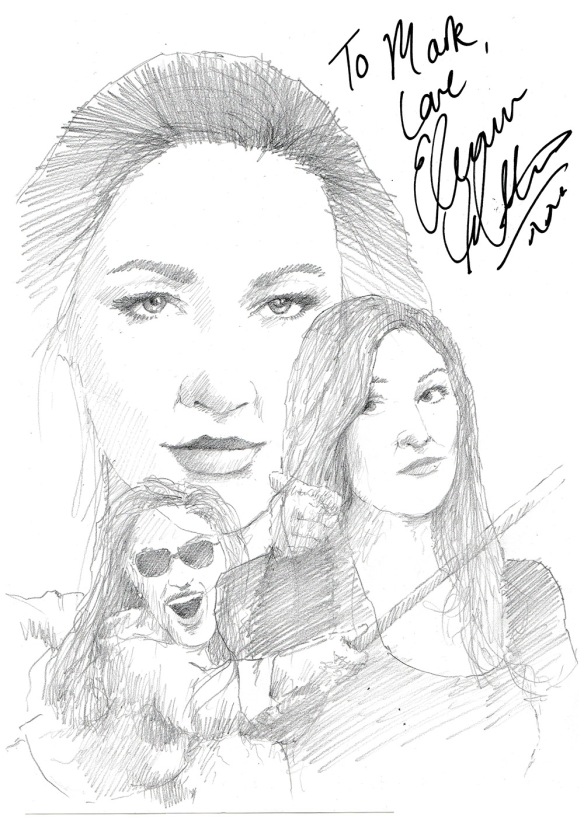 Tokyo-born and London raised actress Eleanor Matsuura is currently appearing as the determined Isobel in Clare Lizzimore’s riveting production of Mike Bartlett’s razor-sharp Bull at the Young Vic in London.

The play looks at the fine line between office politics and playground bullying as three employees fight to keep their jobs in a corporate wrestling ring.

It’s nasty, it’s brutish, it’s short – a 55 minute exercise that provides catharsis for theatregoers who want to purge the day’s tensions by watching a metaphoric version of what may be happening during regular office hours.

I drew this montage of Eleanor including her role in Enron at the Noel Coward Theatre, which she signed for me after two rounds in the ‘ring’ (a matinee and evening performance) on Wednesday.

Fresh from her nomination for the top award at the Edinburgh Fringe Festival, the irresistible Lucy Beaumont returned to London’s Soho Theatre this week for a three night stint with her show WE CAN TWERK IT OUT.

Lucy’s unique blend of surreal, off beat humour relating to her observations of the strange working class culture in her native Hull has won her an increasing number of fans, the BBC New Comedy Award and a starring role in BBC 3’s Live at the Electric.

I originally drew this sketch in October 2014, when Lucy debuted the show, but missed getting her to graph it. With six different shows on it’s three stages during the course of the evening, the Soho Theatre can be a lot like the Tube during rush hour and often takes a bit of navigating to find people. But, this time  I managed to catch up with her in the crowed bar after her final performance and she was more than happy to inscribe this sketch.

One of Britain’s best loved actresses and comediennes Dawn French and 80’s pop star Alison Moyet appeared together in the West End during the middle of 2006 in the production of Smaller at the Lyric Theatre in Shaftesbury Ave.

I didn’t, as usual have much time to do a sketch, but managed this ‘quickie’ which was based on the show’s publicity material. It is the literal ‘on the spot 5 minute scribble’ with a black biro and a bleeding…well leaking, but it was red, so bleeding red fine liner for the inscription. It eventually bled everywhere and I needed to fix the image with white out. As I didn’t want them to sign an image covered in white out, I took a photocopy of the drawing. Hence the red inscription is now black.

Although I managed to capture the likeness of the two, I wasn’t particularly happy with it, but Dawn and Alison were (I think), which is all that counts.