I finally got to meet the Broadway icon and one of America’s greatest stage actresses Cherry Jones on Saturday at the Duke of York’s Theatre in London where the two-time Tony winner makes her West End debut in Tennessee William’s 1944 five-character memory play, THE GLASS MENAGERIE.

Cherry reprises her 2013 Broadway role as the faded Southern belle Amanda Wingfield  in the John Tiffany production which also headlined at last year’s Edinburgh Fringe Festival, where critics described her performance as ‘sensational’.

“For a woman my age this part is our HAMLET,” said the sixty year-old in a recent interview with WhatsOnStage. She also said that she had been trying to get to Britain all her adult life, “Now I’m in heaven and I want to stay.” TV viewers will know her for her Emmy Award winning role as the US President Allison Taylor in the Fox series 24.

Cherry was having a quick break from an afternoon run-trough on Saturday before the evening performance and I happened to be there at the right time. She was very warm and gracious and was more the happy signed my sketch.

A week in politics can be a long time… 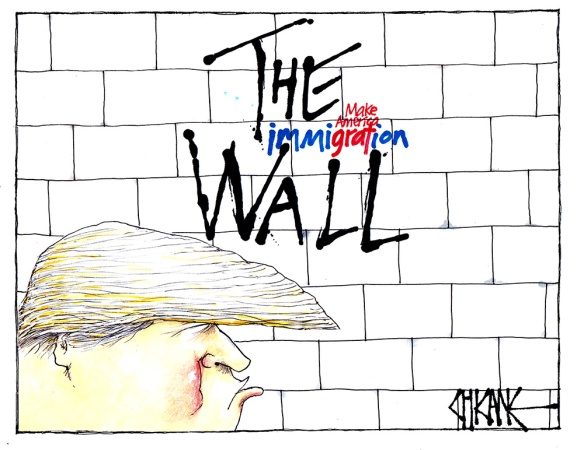 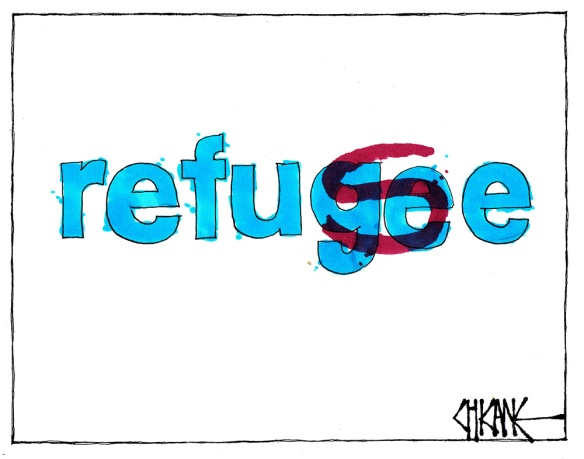 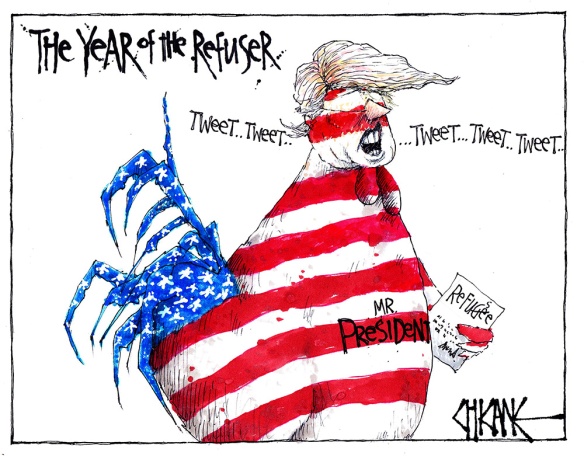 English actress Kirsten Hazel Smith joined this years cast for the 65th year of Agatha Christie’s THE MOUSETRAP, the world’s longest running play. At London’s St Martin’s Theatre. Kirsten plays Mollie Ralston, the proprietor of Monkswell Manor, the venue for the famous murder mystery. Kirsten’s previous stage appearances include THE IMPORTANCE OF BEING EARNEST at Regent’s Park Open Air Theatre and A FLEA IN HER EAR at the Old Vic.She signed this drawing for me after last Saturdays matinee at the stage door.

Hannah Lee is one of the new cast members for the 2016/17 season of Agatha Christie’s legendary whodunnit THE MOUSETRAP, as it continues its record-breaking run at St Martin’s Theatre. Hannah has played Miss Casewell since the cast change-over lat last year. A graduate of the Bristol Old Vic, after completing an Honours degree in English at Cambridge University, Hannah made her West End debut in the world’s longest running play and becomes one of the 450 actors and actresses who have appeared in the production since it opened at the Ambassadors Theatre on 25 November 1952. The cast have a very short time between the late Saturday matinee, and the evening performance, but Hannah did pop out for a break and I managed to catch her to sign this drawing.

Spanish ballerina Elisa Badenes is a Principal dancer at the Stuttgart Ballet and a Guest Artist with the English National Ballet. She has just competed the London Coliseum leg of the UK tour of Abram Khan’s production of GISELLE. After attending the Conservatorio Profesional de Danna de Valencia in her home town she won a scholarship at the Prix de Lausanne in 2008 to study at the Royal Ballet, graduating a year later. She joined the Stuttgart Ballet and quickly rose to her current Principal position. I left this sketch at the stage door on Sunday, just before Elisa danced the final performance and it arrived back yesterday, signed and dedicated.

Twenty-eight year-old London-born actress Karla Crome is currently receiving excellent reviews for her portrayal of Mozart’s shrewd and sharp-witted wife Constanze in Michael Longhurst’s revival of Peter Shaffer’s AMADEUS  on the Olivier stage at the National Theatre. Writing in the Radio Times, Claire Webb said that Karla was “superb.” Her small screen credits include Sky Atlantic’s HIT & MISS and regular Jess on E4’s MISFITS. In 2012, Screen International named her as one of the UK Stars of Tomorrow.

Karla is also an accomplished playwright. IF CHLOE CAN was presented by the National Youth Theatre and the award-winning MUSH AND ME premiered at the 2014 Edinburgh Fringe.

I found an intriguing piece of trivia in her Q&A on the Theatre’s website. Karla was asked about any pre-show rituals, and she replied she always does vocal warm-ups by singing ten nursery rhymes through a straw.  “It’s not a good look, but I swear by it.”

I left this sketch at the National, where she signed it for me, in clutch pencil, which is also unusual.

Born Johannes Chrysostomus Wolfgangus Theophilus Mozart in 1756, the most gifted musician in the history of classical music was multilingual and freely adapted his name to other languages. He preferred ‘Amadeus’, the latin version of his Greek middle name and so did Peter Schaffer for the title of his multi-award winning play and film about the bitter rivalry between court composer Salieri and the young upstart Mozart. The National Theatre’s latest revival directed by Michael Longhurst, is currently running on the Olivier stage starring Adam Gillen in the title role.

Best known as Liam, the son of the transvestite barman/woman Les(ley) in the ITV hit series BENIDORM, Adam’s stage performance has drawn rave reviews from the critics, including Paul Taylor from the Independent. “Adam Gillen delivers the most moving portrayal of Shaffer’s version of Mozart that I have seen since Michael Sheen played the role 20 years ago.” He described his portrayal as “Rik Mayall during a bout of Tourette’s.” I dropped this sketch of Amadeus Adam of at the Theatre’s stage door and it was returned signed and dedicated with a Happy New Year greeting.

Australian mezzo-soprano Emily Edmonds is one of the rising stars of opera and a member of the prestigious Jette Parker Young Artists Programme at London’s Convent Garden. The Royal Opera’s high profile training scheme attracted 370 applicants from 59 countries in 2014, who were put through a gruelling audition process until the final five was selected ….one of whom was Emily!

Her first season included performances in ORPHEUS at the Sam Wanamaker Playhouse in Shakespeare’s Globe, SOUR ANGELICA and WERTHER on the main stage and the world premiere of 4.48 PSYCHOSIS at the Lyric Hammersmith. During the current 2016/17 season she has appeared in MANON LESCAUT, MADAMA BUTTERFLY, DON CARLO and will be seen in Philip Glass’s dance opera LES ENFANTS TERRIBLES at the end of this month.

I left this drawing at the ROH and Emily signed and returned it to me last week. 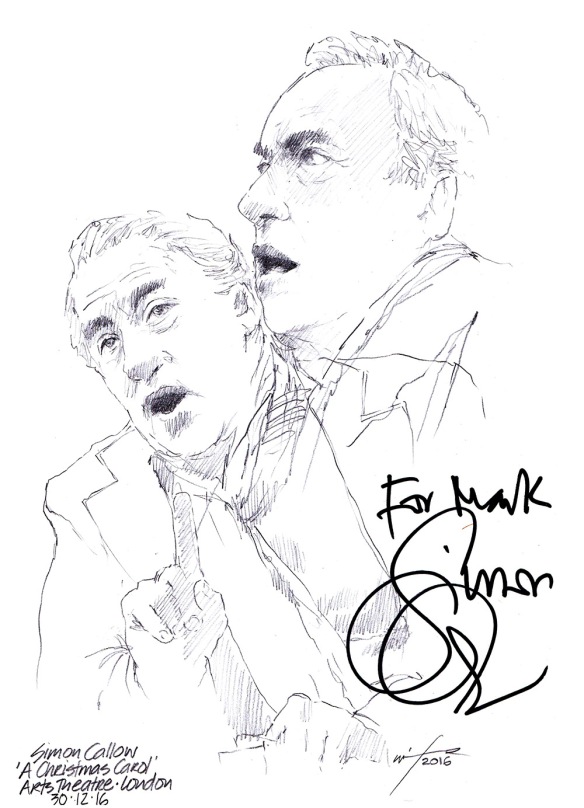 Simon Callow’s passion for the work of Charles Dickens continued over the festive season just passed, when he bought his solo show A CHRISTMAS CAROL back to the West End.

After sell-out runs in 2011/12, acclaimed by both critics and audiences alike, the brilliant veteran actor and ‘Dickensionado’ once again teamed up with director-designer Tom Cairns to perform Dickens’ own performance adaption of the much loved Christmas novella in a limited run at the intimate Arts Theatre. Described as a ‘one-man theatrical extravaganza of heart warming and deeply moving festive story-telling,’ Simon plays the Victorian author himself, Scrooge and a host of other parts in the 90 minute performance.

“Embody the narrator Scrooge and other characters, Callow whisks the audience away on a journey that makes you feel like you have never heard A CHRISTMAS CAROL before,” wrote George Simpson in the Express.

I meet the charming and charismatic Simon after his matinee performance a couple of Saturdays ago in the small cafe/bar/front of house/box office at the Arts Theatre and he signed this drawing for me.

After an eight year hiatus, RIPPER STREET’S Lucy Cohu returned to the stage in Andrew Bowell’s psychological thriller SPEAKING IN TONGUES at London’s Duke of York’s Theatre in the Autumn of 2009. She played double roles moving from a seductive wife to a terrified victim. Among her small screen roles was Princess Margaret in Channel 4’s THE QUEEN’S SISTER which earned her Emmy and BAFTA nominations in 2005. Three years later she won an International Emmy playing Liz in the true-life drama FORGIVEN.

Lucy was back on the London boards this Christmas in the classic 1930’s comedy,  often described as  Broadway’s revenge on Hollywood, ONCE IN A LIFETIME at the Young Vic, playing the star-columnist Helen Hobart. I meet her in the last week of the run and she signed this montage sketch for me.