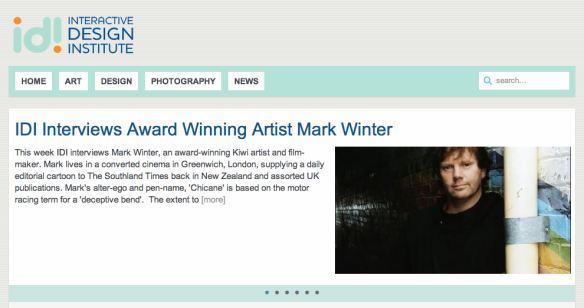 Check out the whole interview here

Actress Tara Fitzgerald has appeared in two acclaimed productions on the West End over the last few years. Her theatre pedigree includes playing Ophelia opposite Ralph Fiennes in Hamlet on Broadway in 1994-95, winning the New York Drama Desk Award for Outstanding Featured Actress in a play.

In 2009 she featured in The Misanthrope, alongside Damien Lewis and Keira Knightley at the Comedy Theatre.

Tara signed my sketch at the Comedy Theatre in December 2009 after a performance of The Misanthrope. She’s always friendly and obliging and stops for a chat after the show. 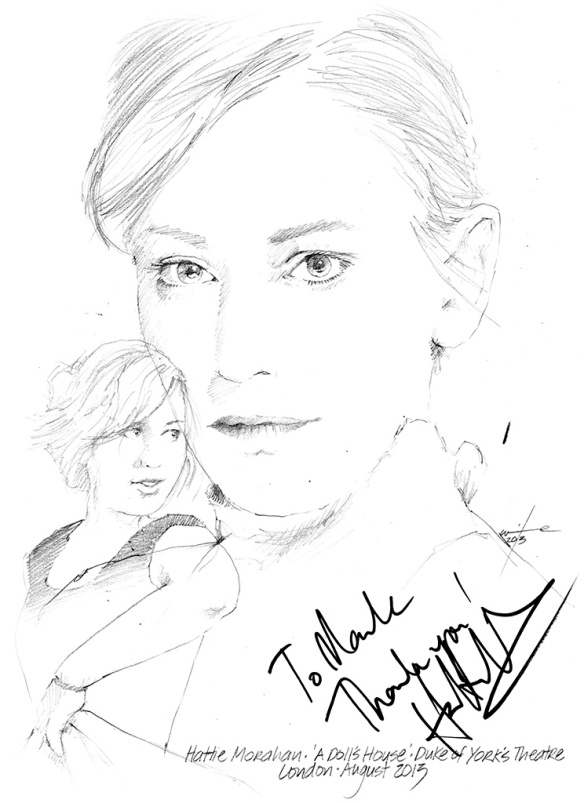 Hattie Morahan’s performance as Nora Helmer in Henrik Ibsen’s A Doll’s House has been receiving rave reviews. The 1879 play’s critical attitude toward 19th century marriage norms courted controversy at the time. Hattie’s character is a mother of three, living as the ideal 19th century wife, but leaves her family in the end.

In 2006 it held the distinction of being the world’s most performed play. UNESCO’s ‘Memory of the World Programme’ was instigated in 1992 to safeguard the documentary heritage of humanity, calling for the preservation of valuable archival material. It has inscribed Ibsen’s autographed manuscripts of A Doll’s House in recognition of their historical value.

A new version, adapted by Simon Stephens and directed by Carrie Cracknell, opened at London’s Young Vic Theatre in June 2012 with Hattie playing opposite Dominic Rowan. She won both the Evening Standard and Critic’s Circle Awards for her performance and was nominated for an Olivier Award.

The production transferred to the Duke of York’s Theatre this month for a limited season, where Hattie signed my sketch after Tuesday’s evening performance and Q&A session.

I met Luke Treadaway this week. Really nice guy and an impressive actor. It was at the Apollo Theatre stage door after an evening performance of the poignant and powerful play THE CURIOUS INCIDENT OF THE DOG IN THE NIGHT-TIME. He’s  a 28 year-old who portrays a 15 year-old (15 years, 3 months and 2 days to be precise) Christopher Boone, who by his own admission is “a mathematician with some behavioural difficulties”. Although not stated, the young protagonist displays characteristics of high-functioning autism as he investigates the death of Wellington – the neighbour’s black poodle.

It’s based on Mark Haddon’s  2003 best-selling mystery novel. The title is a quote from the famous fictional sleuth Sherlock Holmes in Arthur Conan Doyle’s 1892 short story ‘Silver Blaze‘. The play premiered at the National Theatre in August 2012 with stage adaption by Simon Stephens and directed by Marianne Elliot. It transferred to the Apollo in May 2013. It won a record-equalling seven Oliviers at this years awards, including a Best Actor statuette for Luke – no easy feat, considering the other nominees were Mark Rylance, Rupert Everett, Rafe Spall and James McAvoy. I had to meet Luke this week because he finishes playing Christopher on Saturday. As he said, ‘Yep, only four more performances.”  I drew two sketches with Luke and the delightful Niamh Cussack, who plays Christopher’s mentor Siobhan. He signed this one and both of them graphed the other. 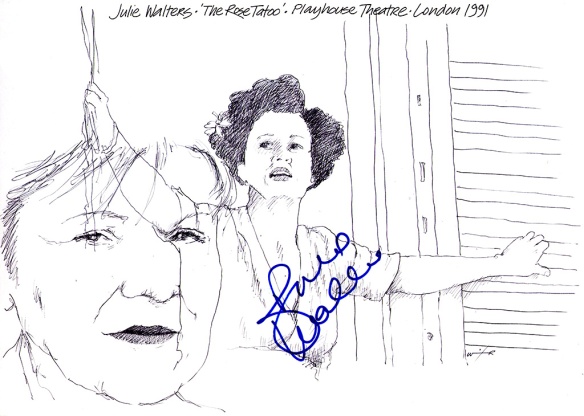 Julie Walters is one of my favourite actresses. I am not alone. An Orange Film Survey rated her the Greatest of British Film Actresses in 2001 and ITV’s 2006 poll had her 4th in the 50 Greatest Stars in the UK. Julie debuted on the London stage in 1980 in Willy Russell’s EDUCATING RITA about a hairdresser’s literary quest. It was a role that bought her international prominence two years later in the film version with Michael Caine and her first of seven BAFTA Awards,a Golden Globe and an Oscar nomination.  Julie has also won two Emmys for A SHORT STAY IN SWITZERLAND (2009) and MO (2011) and an Olivier for her performance as Kate Keller in  Arthur Miller’s ALL MY SONS in 2001 at the National Theatre in London. She is probably more familiar to younger audiences as Rupert Grint’s screen mother, Molly Weasley in 8 of the HARRY POTTER films. I was fortunate to see Julie in Peter Hall’s production of Tennessee William’s THE ROSE TATOO at London’s Playhouse theatre in the early 1990’s. I did this sketch and she signed it for me many years later at the British Film Institute,before participating in JULIE WALTERS IN CONVERSATION in February 2011 as part of a season dedicated to her career in Films and Television.

Christie Brinkley gained worldwide fame in the 1970’s and 80’s as a supermodel – the first to have three consecutive Sports Illustrated Swimsuit Issue covers. She has been married four times, most notably to musician Billy Joel. The ‘Uptown Girl’ appeared in a number of his music videos and illustrated the cover of his 1993 triple platinum album ‘River of Dreams.’ Rolling Stone awarded it the Best Album Cover of the Year. After a successful debut on Broadway as the femme fatale, foxy Roxie Hart in America’s longest running musical, Chicago, the 57 year-old razzle-dazzled West End audiences at the Cambridge Theatre in London during a four-week engagement… va-va-va-voooom! Christie signed my sketch in person at the stage door in August 2011.

Acclaimed British Theatre and Film director Mike Leigh begins his projects without a script, but a basic premise that is developed through improvisation by the actors who are fully liberated in the creative process. He works with them one-on-one to develop a character and after months of rehearsal he writes a brief shooting script, which is constantly refined during the production.

His vision is to depict ordinary life. Mike was influenced in the 1960s by films such as John Cassavete’s Shadows – an improvised cast of unknown observed ‘living, loving and bickering’ on the streets of New York and plays that included Harold Pinter’s The Caretaker. During the 70s and 80s he divided his time directing theatre and making TV films described as ‘kitchen sink realism’. He also wrote a number of plays, including Abigail’s Party.

He has been nominated for the Academy Award seven times and won the Best Director award at the 1993 Cannes Film Festival for Naked. In 1996 his film Secrets and Lies won the Palm d’or, the Best Film BAFTA and an Oscar nomination.

In 2010, at the 54th BFI London Film Festival, his film Another Year was featured. He received his latest Oscar nomination for writing the original screenplay. Mike signed my sketch for me at the screening. 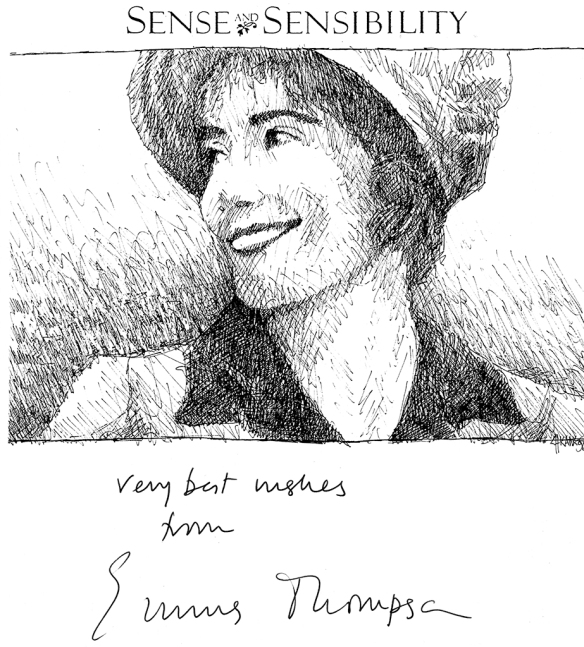 Emma Thompson has won two Academy Awards and apparently keeps both in her downstairs bathroom because she’s embarrassed to place them in a more prominent place.

She is the only person to have won an Oscar in the acting and writing categories. After winning the Best Actress in Howard’s End (1992) she won again for Best Adapted Screenplay for Sense and Sensibility (1995).

Producer Lindsay Doran spent ten years looking for a suitable writer to adapt Jane Austen’s 1811 romance novel into a screenplay. After reading some of Emma’s earlier comedy skits, she hired her, stating that she had the right balance between satire and romance.

“It’s a story of love and money – some people need one more than the other,” Emma said. She spent four years writing it and continued to refine during actual production.

This was Emma’s first screenplay, and a risk for any studio. The selection of Taiwanese director Ang Lee to helm his first major film was also a surprise. Initially not considered for an acting role, Emma was convinced to join Kate Winslet to play the Dashwood sisters. Both received Oscar nominations for their performances. Any concerns proved unfounded as Sense and Sensibility went on to become a major commercial and critical success, cited as the best adaption of Austen’s work, garnering seven Oscar and twelve BAFTA nominations amongst a myriad of other awards.

An interesting anecdote occurred when  Emma was a guest on the TV quiz show QI, hosted by her friend Stephen Fry. It was revealed that Stephen had saved her Sense and Sensibility script when her computer malfunctioned and turned her writing into hieroglyphics.

After 7 hours the script was restored. Fellow participant Alan Davis questioned Stephen’s technical skills and suggested he probably rewrote it. Emma candidly agreed to that possibility and said she would drop the Oscar around to his home.

Emma signed my sketch at her London office in 1996.

At a meet between British AAA and Oxford University on the 6th of May 1954, at Oxford’s Iffley Road Track, Roger Bannister became immortalised.

Once thought impossible, the four minute mile barrier was broken for the first time. When the ground announcer, Norris McWhirter (who would co-publish and co-edit The Guinness  Book of Records) declared “the time was three…” the roar of the 3000 spectators drowned out the details of Bannister’s feat… 3 mins 59.4 seconds.

The early months of 1954 were an intense period of attempts on the sub-four minute mile record, with two athletes getting close. American Wes Santee recorded a 4.02.4 and Australia’s John Landy a 4.02.0 .

Bannister’s record only lasted a short while. His great rival Landy ran 3.57.9 in Finland 46 days later. However, at the 1954 British and Commonwealth Games in Vancouver, both men lined up in what was called ‘The Miracle Mile’. After leading for most of the race, Landy was overtaken on the final bend by Bannister, who went on to win the gold in a time of 3.58.8.

The mythical four minute mark has been lowered by almost 17 seconds over the last 50 years. New Zealand’s John Walker was the first man to run 100 sub-four minute miles, finishing with 135 at the end of his career. American Steve Scott broke the four-minute barrier 136 times.

In the late 1990’s I interviewed Lord Jeffrey Archer at his London penthouse. He showed me the actual official stopwatch that was used to time Bannister’s historical feat. In 2011 he donated the watch for a charity auction fetching £97,250 for the Oxford University Athletics Club.

After his retirement in 1955, Sir Roger became a distinguished neurologist and Master of Pembroke College, Oxford, where I sent my caricature, which he kindly signed in 1991.

Speed canoeists Ian Ferguson and Paul MacDonald are New Zealand’s most successful Olympians. ‘Ferg and Macca’ gained New Zealand sporting immortality at the 1984 Olympics in Los Angeles. On the lake Casitas course they were unstoppable, Ian won gold in the K1, K2 and K4 events and Paul in the K2 with Ferg and the K4 along with Grant Bramwell and Alan Thompson.

There was a suggestion that their results were questionable due to the Eastern block boycott, so the following year they won gold at the World Championships in Belgium, beating crews from Eastern Europe and Russia. They had also beaten all crews leading up to the Olympics in the previous year