A selection of 2016 Chicanery. 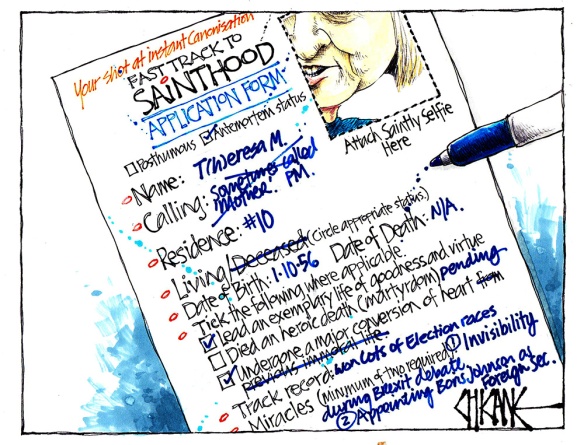 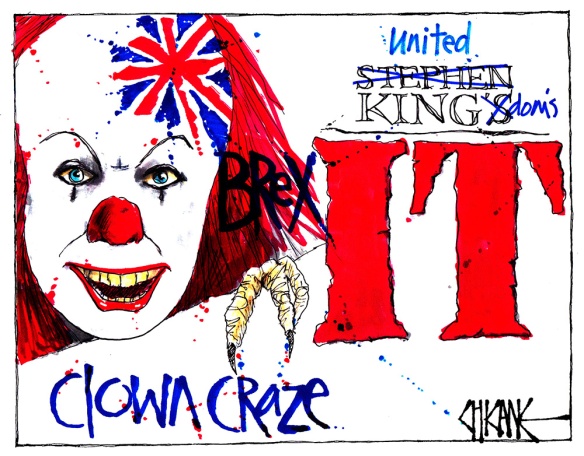 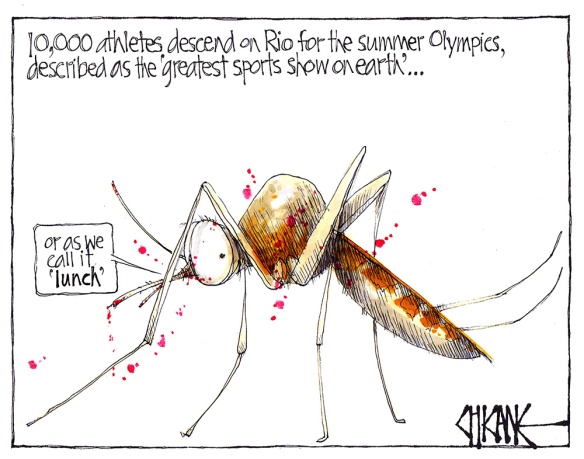 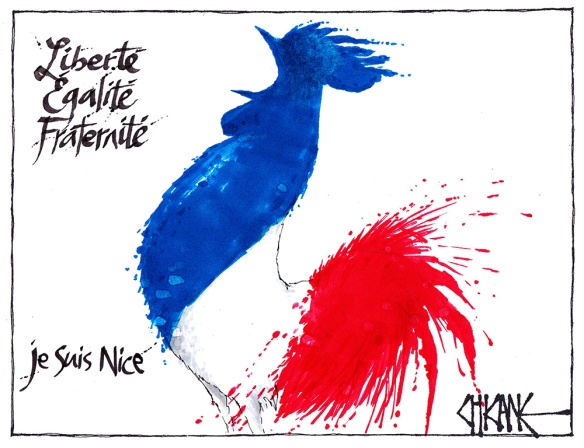 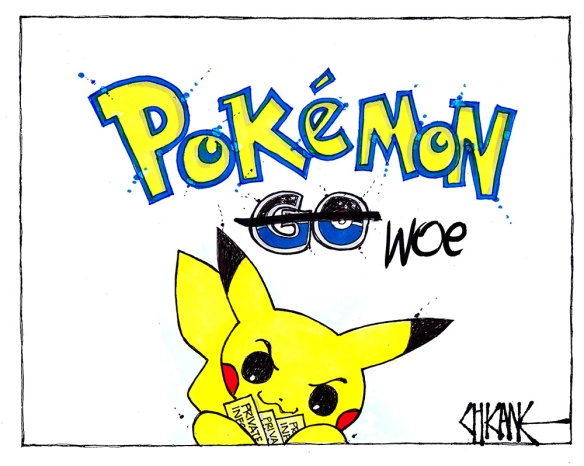 This David Gower caricature was the final cross-hatching experimentation in my series of English cricketers who toured New Zealand in  the summer of 1991/92.  Considered as one of the most stylish and prolific batsman that has ever played the game, ‘Lord Gower’ recorded an impressive First Class record, accumulating over 26,000 runs at an average of 40.08, including 53 centuries, 18 of which were scored in Test matches, including his top total of 215 against Australia at Edgbaston during the 1985 Ashes series.

The former England captain was described by Wisden as “fluffy haired, ethereal looking, who payed beautifully until the moment he made a mistake, but somehow the mistake was put off long enough for him to play an innings of unforgettable brilliance.” He was often criticised  by the media for being too laid back and nonchalant Peter Roebuck to remark “Gower ne’er moves, he drifts,” and France Edmonds in the Daily Express wrote,” it’s difficult to be more laid back without being actually comatose.”

These days he leads the Sky Sports commentary team in his usual stylish and relaxed manner. 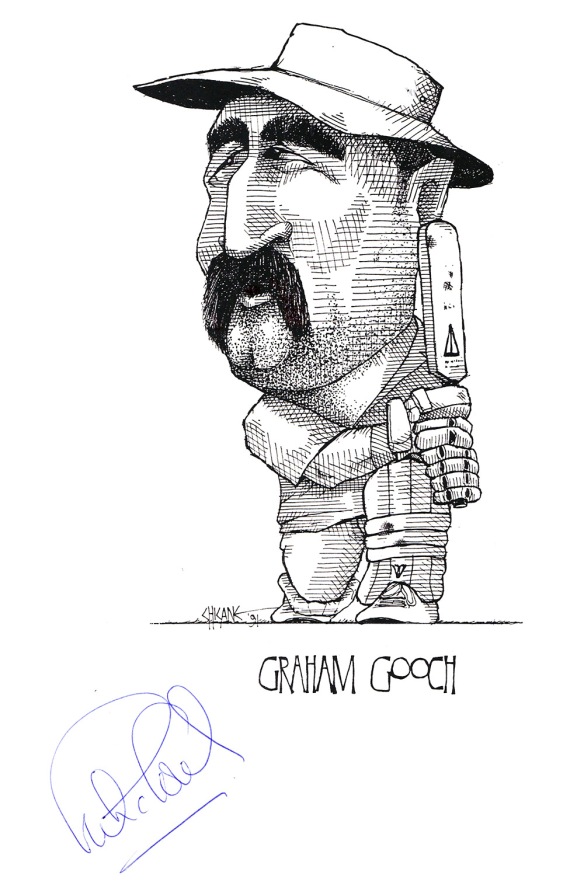 Yesterday I posted a caricature of English cricketer and  prolific batsman Allan Lamb which he signed for me at the Basin Reserve in Wellington during the third test against New Zealand in February 1992. The captain of the England team on that very successful tour was the enigmatic Graham Gooch, the most prolific top-class run scorer of all time with 67,059 of them in a career that started  as a 19 year-old in 1973 for county side Essex until he retired in 1997.

Journalist Matthew Engel described him as the most “uninhibited belter of the cricket ball” in his ESPN Cricinfo bio. He book-ended his test-playing career with matches against the old Ashes foe, Australia-the first in Birmingham in the summer of 1975, the last in Perth twenty years later. In that time he played 118 tests, scoring 8,900 runs notching up twenty centuries with a top score of 333 against India at Lords in 1990.

For good measure he belted a second innings 123 for a total of 456 in the match. In 125 ODI’s he scored 4,290 runs including eight 100’s. For three years in the 1980’s he was banned from playing for England for leading the first rebel tour to South Africa, so imagine what his international run tally could have been.

I drew this caricature of ‘Goochie’ in my signature 80’s cross-hatching style and he obliged with his signature in between ball-belting at the Basin. 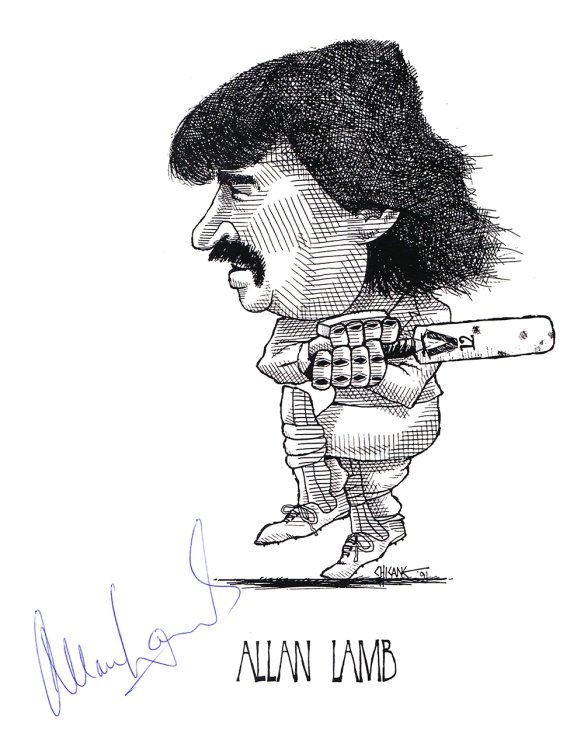 One of the most dominant batsman during the 1980’s was England cricketer Allan Lamb.  He was also one of my favourite players. Born in South Africa to British parents, Allan joined the county side Northamptonshire in order to play test cricket for England because his native country was banned from playing International cricket due to the apartheid regime.

He made his debut against India in 1982 becoming cap number 492 and ended his 79 test-playing career against Pakistan exactly 10 years later, almost to the day. In that decade he scored 14 centuries and 18 half-centuries, amassing 4,656 runs at an average of 36.09. He also played 122 ODI’s scoring over 4000 runs with four centuries and 26 half-centuries. His last test ton was his highest, scoring 142 against New Zealand at the Basin Reserve in Wellington in February 1992, where he signed this caricature for me. During that time I used to draw caricatures with a black fine line pen and a technique that I have loosely labelled my ’80’s cross-hatch period’, combining minimal horizontal and vertical lines to define the white highlights and for the hair I rendered a much tighter, ‘frenzied’ hatch for textual contrast.

Unlike Allan, I had mixed results with the hatching, but this is an example one that I was not unhappy with.

I’m not sure when I drew this caricature of Australian tennis legend John Newcombe. I think it was sometime in the 1990s when he was an Australian Open commentator at Melbourne Park. Somehow I managed to get it to him. I don’t do many caricatures for signing these days. It was my modus operandi back then and surprisingly got most of them signed. I didn’t resort to vicious renderings, preferring a softer approach with a comical likeness in order to get the work ‘graphed. I liked to use a fine line 0.05 black felt pen and board cross-hatch style with big heads, small bodies and extended necks… where appropriate.

For the record John won seven Grand Slam singles titles including three Wimbledons and secured an all-time record 17 doubles victories. He was World Number 1 in both singles and doubles. Rod Laver is the only other player to have won the US Open and Wimbledon as an amateur and a professional.

As a bit of trivia, given that the US Presidential elections are upon us, it was revealed during the 2000 campaign that John was George W Bush’s drinking companion in September 1976 when the future President was charged with driving under the influence.

Cricketer Javed Miandad is the greatest batsman Pakistan has ever produced, playing for his country from 1976-1996. Not only is he a national hero, but one of the world’s most ebullient sporting personalities.

In 124 test matches Javed scored 8,832 runs with a batting average of 52.57, including 23 centuries with a top score of 280 not out against India in the second test in Hyderabad in the 1982-83 series. Captain Imran Khan declared the innings, stopping him from possibly breaking the individual Test record of Sir Garfield Sobers.

Javed also played 233 One Day Internationals (ODIs) scoring 7,381 runs with 8 centuries and 50 half centuries. In fact he holds the record for the maximum number of consecutive half centuries in ODIs .

In his debut Test against New Zealand in Lahore in 1976 he became the youngest batsman to score a century on debut at the age of 19 yard and 119 days. I the third test he scored 206 runs, breaking George Headley’s 47 year recored, becoming the youngest player to score a double century.

Javed signed this sketch when he toured New Zealand in the 1988-89 after scoring 271 in the third test at Eden Park in Auckland. 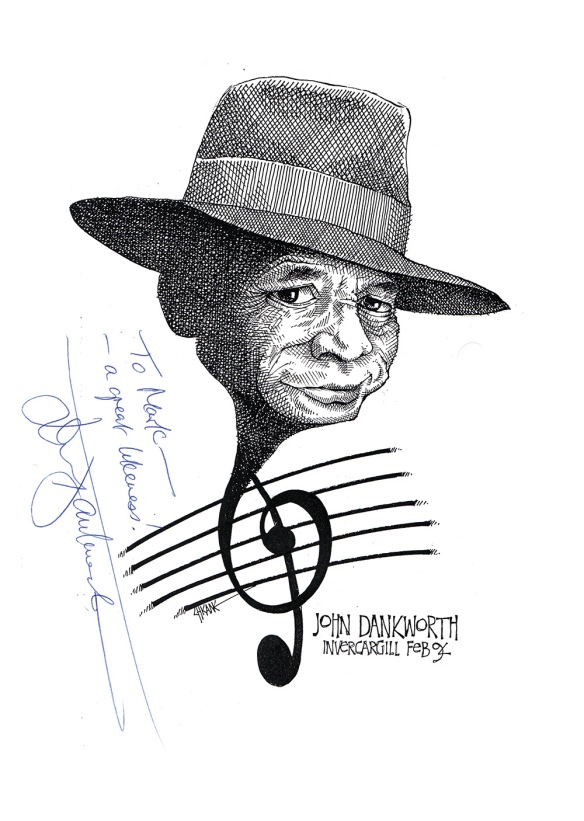 I had the privilege of meeting British musical legend Johnny Dankworth and his wife Cleo Laine when they visited my hometown of Invercargill in southern New Zealand in 1994. I drew this black biro sketch, which he really liked, and he happily signed it for me. I gave him the original.

Knighted in 2006, Sir John Phillip William Dankworth was considered a pioneer of modern jazz and leading composer of film music. A superb instrumentalist, Johnny was one of the first British musicians to witness and then to explore the new avant-garde style of jazz, bebop, that emerged from New York after the Second World War.

He established The Stables at Wavendon, a charity that has provided education and opportunity for generations of young musicians. He also instigated the Jazz Course at the Royal Academy of Music, an area of study common in such institutions now, but highly  controversial in classical circles at the time. As Johnny put it, “to say that jazz was divided about the validity and desirability of bebop would be seriously understating the case. It would be like saying that Americans were a tiny bit cross with the Japanese after Pearl Harbour”.

Sir John passed away in 2010 aged 82. His final appearance on the stage was a solo performance for the London Jazz Festival at the Royal Albert Hall in December 2009, playing his sax form a wheelchair.

The diminutive Indian batsman Sunil ‘Sunny’ Gavaskar is regarded as one of, if not the greatest, opening batsmen in cricket history. He was certainly the most successful in the 1970s and 80s.

During his career he set world records for the most test runs and the most test centuries scored by a batsman. In 125 test appearances he scored 10,122 runs at an average of 51.12 and in 108 ODIs he reached 3,092 runs. He has compiled 34 test centuries with a top score of 236 not out against the West Indies in Madras. It was his 30 ‘ton’ in his 99th match, overtaking the great Don Bradman‘s 29 test centuries record. Subsequently the other ‘little master’ Sachin Tedndulkar has passed him with 51. His style was technical correctness over flair, which is suited for test matches rather than the shorter versions of the game. He was particularly skilled at playing fast bowling with immaculate defence and hooking and pulling in equal measure. 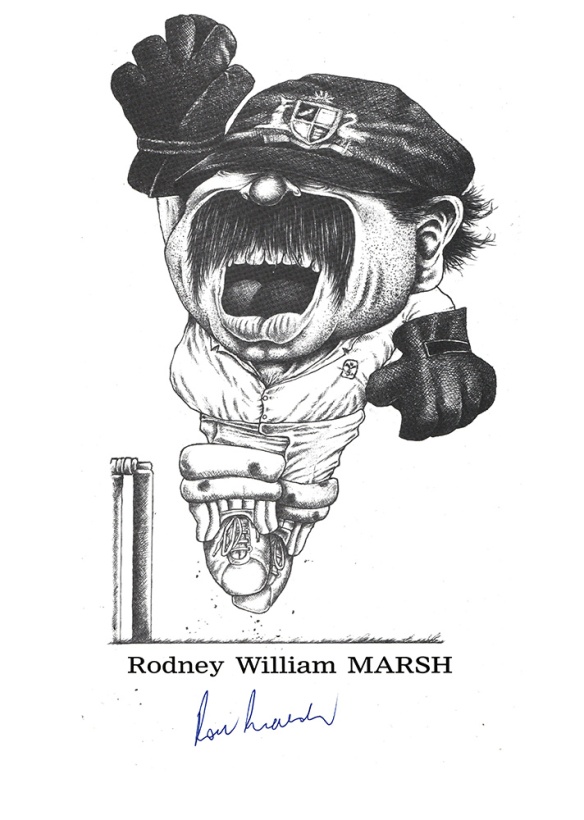 ‘Caught Marsh, bowled Lillee’ became a very familiar scoreboard entry during the 1970s and early 1980s. It appeared 95 times in Test matches, which is a partnership record between wicket-keeper and bowler that is yet to be broken. Dennis Lillee and his Western Australian teammate Rod Marsh continued their State success in the international arena that would cement the two in Australian cricketing folklore.

Wisden stated, “Few partnerships between bowler and wicket-keeper have had so profound an impact on the game.”

Dennis began his career as a tearaway fast bowler but back injuries fired him to remodel his bowling action and he returned more accurate and dependable, ending his career as the leading Test wicket-taker, taking the 355th off his final ball against Pakistan in Sydney in January 1984. Coincidentally, rod ended his career with a world record 355 Test dismissals – 343 catches and 12 stumpings.

Rod raised the role of wicket-keeper with his acrobatic diving and raucous appeals. he once commented on his understanding with Dennis: “I’ve played with him so much now that most of the time I know what he is going to do before he has bowled.”

In the 1974-75 Ashes series he and fellow quick Jeff Thomson formed on elf the most potent opening bowling combinations in Test cricket to steer Australia to an emphatic 4-1 victory. “Ashes to Ashes, dust to dust, if Thomson don’t get ya, Lillie must,” was the caption The Sunday Telegraph used. Even though he had cut his pace and length of run up , relying more on seam movement, Dennis bowling was still timed at 154.8km/h

The both signed a limited edition run of 10 prints of my caricatures for charity.