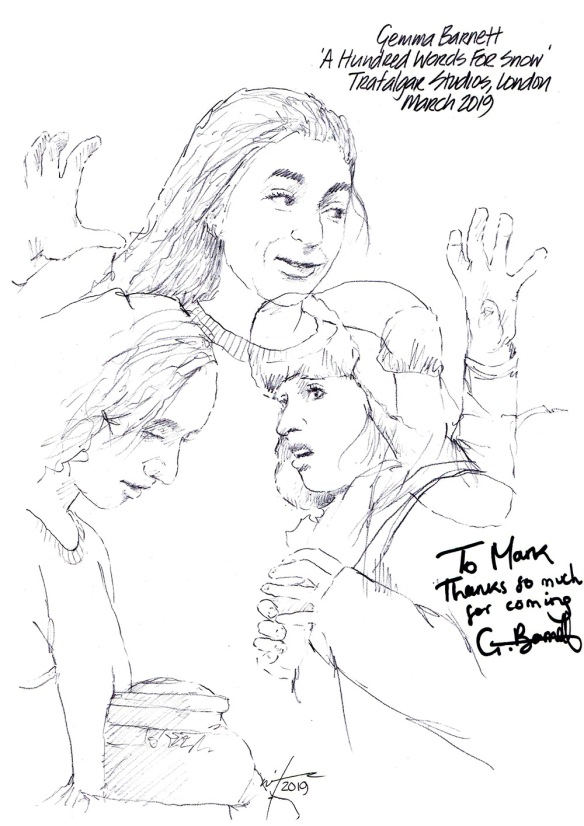 Tatty Hennessy’s ‘outrageously funny and deeply moving’ coming-of-age tale… with polar bears, A HUNDRED WORDS FOR SNOW has transferred to London’s West End with a flurry of excellent reviews and accolades after successful appearances at The Vaults and the Arcola Theatre last year.

Directed by Lucy Jane Atkinson, the one hour, one person play, which mixes polar exploration with teenage awkwardness will run in the Trafalgar Studio 2 until the end of the month. Oxford school of Drama graduate Gemma Barnett plays Rory – short for Aurora – a young woman determined to scatter her dad’s ashes at the North Pole. It was a trip they had planned before he suddenly died in an accident, one last expedition, which the Guardian’s Michael Billington called an “extraordinary story. “The play explores the difficulties and desires of growing up and searching the unknown in a melting world, covering the themes of climate change, feminism and self-discovery.”

As Tatty points out, it’s very relevant, given the UN’s latest stark and startling Climate Chang report. “How traumatic, isolating and overwhelming it must be to lose someone you love and to lose them at 15, to be grieving during puberty,” said Gemma in an interview for London Theatre Direct.

I caught up with Gemma last Saturday at the stage door after her matinee performance, described by James FitzGerald in his WhatsOnStage review as “impassioned and intoxicating,” where she signed my sketch.

Scottish actor Jack Lowden won the Olivier Award for his harrowing portrayal of an ailing and anguished artist in Richard Eyre’s London revival of Ibsen’s GHOSTS. Initially staged at the Almeida in the Autumn of 2013, the production transferred to the Trafalgar Studios in the West End, concluding in March 2014. Jack played Oswald Alving opposite Lesley Manville (who also won the Olivier) as Helen,his widowed mother. He has inherited syphilis from his lecherous late father and as his heath deteriorates, returns home from living as a painter in Paris, where falls for the maid Regina, who turns out to be his philandering father’s illegitimate daughter.

The subject matter of religion, general disease, incest and euthanasia, “caused an explosion of outrage and critical venom,” said the director, when it was first staged in 1882 in the US. In his five-star review for the Telegraph, Charles Spencer wrote, “Jack Lowden, big, shambolic and increasingly distraught as her bohemian artist son conveys the ugly, egotism of the chronically sick and the sheer terror of his terrible illness. The plays closing moments are almost too upsetting to watch.”

Jack is currently back on the London stage after enjoying his first major international onscreen success in the 2016 BBC miniseries WAR AND PEACE. He stars opposite Hayley Atwell in Shakespeare’s MEASURE FOR MEASURE at the Donmar Warehouse, Josie Rourke’s final production as artistic director for the intimate Covent Garden venue. In a unique gender-reversal, Jack and Hayley alternate the roles of Angelo and Isabella during the play. Jack signed my sketch when he arrived for last Saturday’s matinee. 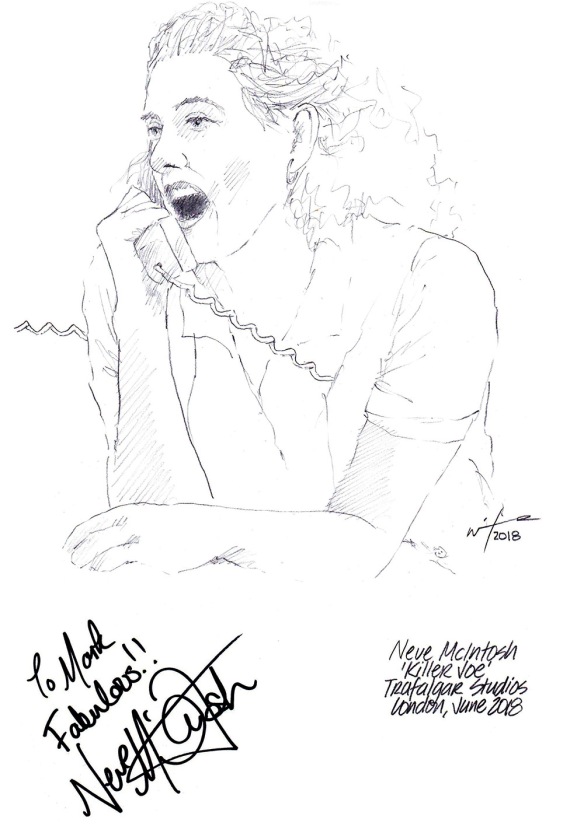 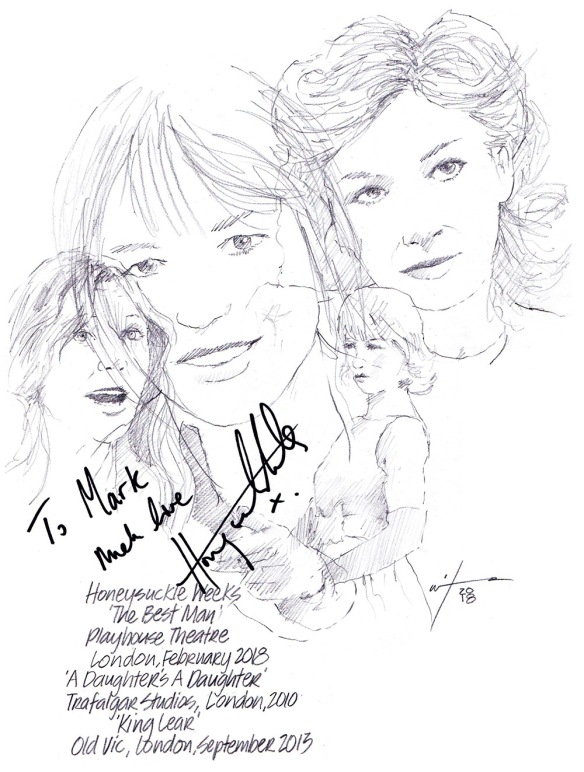 Honeysuckle Weeks has a memorable stage name, so called because the fragrant climbing plant was in bloom at the time she was born 38 years ago. After graduating from Oxford University with an English degree in 2001, she embarked on an acting career that has spanned stage and screen.

She is best known on the small screen for her role as Samantha Stewart in ITV’s wartime drama FOYLE’S WAR. In 2010 she appeared in the West End run of Agatha Christie’s A DAUGHTER’S A DAUGHTER at the Trafalgar Studios and three years later played Cordelia in KING LEAR at the Old Vic.

She is currently starring in the West End debut of Gore Vidal’s THE BEST MAN at the Playhouse Theatre. I did this montage of Honeysuckle in all three stage roles and she signed it for me as she arrived at the Playhouse for last Saturday’s matinee.

English actor and singer Joe Millson was attracted back to the London stage by the script of Alexi Kaye Campbell’s APOLOGIA, which is currently running at the Trafalgar Studios until November. Joe plays both sons; the calm but troubled Simon and the thick-skinned banker Peter, who attend their mother’s (Stockard Channing) birthday, a matriarchal figure and famous art historian who has just published her memoirs neglecting to mention her them.

It was originally drafted for two actors but it was director, Jamie Lloyd’s innovation to use one. “It’s very light, easy-to-watch stuff, but leaves you with a punch in the gut,” said Joe in a recent interview. Theatre critic, Neil Dowden, writing his review in Exeunt wrote, “Joseph Millson excels in contrasting Peter’s self-confident directness with Simon’s subdued, more obliquely accusing manner.” I did suggest to Joe, while he was signing my sketch at the stage door, that they should be paying him double for the dual roles, an idea that appealed.

DOCTOR WHO’s Freema Agyeman made her West End debut last month in the revival of Alexei Kaye Campbell’s family drama APOLOGIA at the Trafalgar Studios. Known as Martha Jones,the Time Lord’s companion and Alesha Phillips in LAW & ORDER:UK, Freema plays Claire, the unrepentant girlfriend. Ironically she turned down a chance to debut on stage at the Donmar sixteen years ago for a role in the soap CROSSROADS, now appears for the first time on the London boards as a spirited soap star. She signed this sketch I drew at the stage door after a Saturday evening performance a few weeks ago. 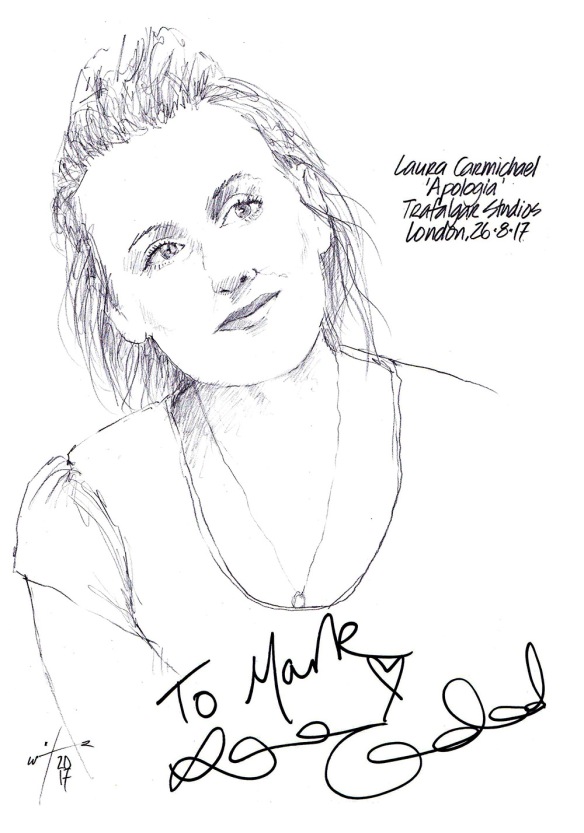 Since playing DOWNTON ABBEY’s Lady Edith for the last time in 2015, Southampton- born Laura Carmichael has been developing an impressive stage career. Last year she appeared in Jamie Lloyd’s THE MAIDS at the Trafalgar Studios and has returned to the intimate London venue this month in another one of his productions, the revival of Alexei Kaye Campbell’s 2009 spiky family drama APOLOGIA.

“However, it’s Carmichael who – released from the corsets of DOWNTON ABBEY – almost steals the show from Stockard Channing. She’s superb as American physiotherapist Trudy, turning uptick lilt of every nervous platitude into comedy gold”, wrote Tom Wicker in his The Stage review. 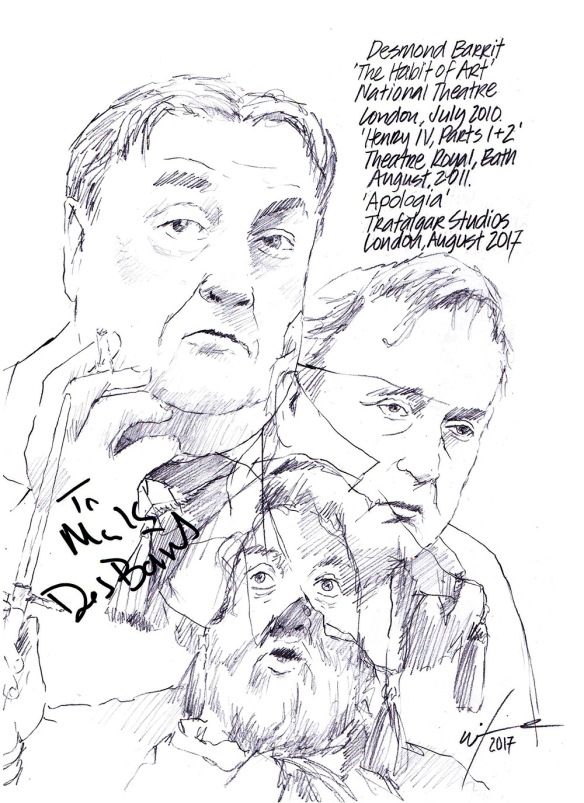 Swansea native Des Barrit is known for his comedic stage performances such as Bottom, Falstaff, Toad and the Antipholus twins in A COMEDY OF ERRORS for which he won the Olivier in 1992. His latest West End outing is as Hugh, the gay best friend of Stockard Channing’s character Kristin in Jamie Lloyd’s revival of APOLOGIA at the Trafalgar Studios. Although a compelling and at times tense family drama, Des once again punctuates the pathos with humour and most of the funniest lines, “Kristin is to diplomacy what I am to heterosexuality,” to quote one example.

I drew this montage of Des, including his 2002 Olivier-nominated role as Falstaff in HENRY IV Parts 1 & 2 at the Theatre Royal Bath and W.H. Auden in the National’s A HABIT OF ART, which he signed after a Saturday evening performance I was lucky enough to see a couple of weeks ago.

Enda Walsh’s two-hander debut play DISCO PIGS is currently enjoying its 20th Anniversary revival at London’s Trafalgar Studios 2, directed by John Haidas. HARRY POTTER’S Evanna Lynch joins Irish actor Colin Campbell as ‘Runt’ and ‘Pig’, two teenagers born at the same time, on the same day and in the same hospital, who have been inseparable until their 17th birthdays when their cocooned world is destined for a head-on crash with reality.

Review Hub scored it 4 stars under the banner ‘Pig’s Fly’. I meet both Evanna and Colin at the stage door last weekend and we’re more than happy to sign and dedicate my sketch. The production ends this weekend. 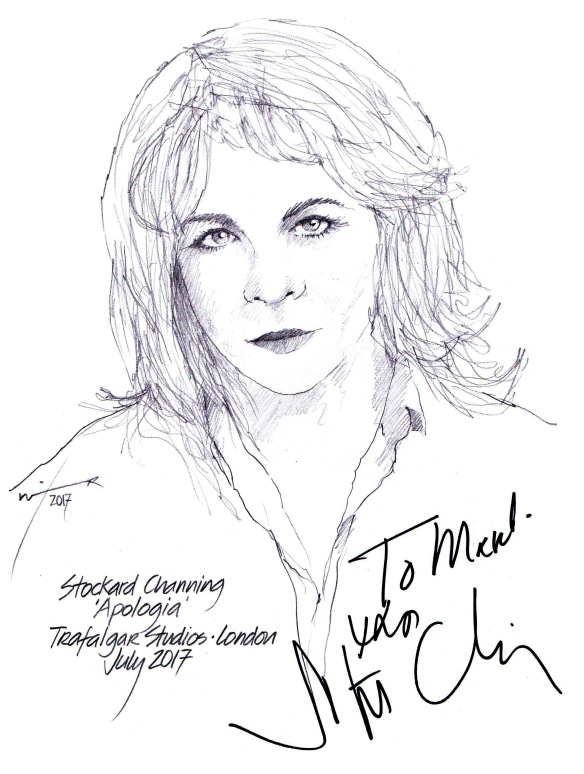 Stockard Channing has made a successful return to the London stage after a ten year absence in Jamie Lloyd’s revival of Alexi Kaye Campbell’s family drama APOLOGIA at the Trafalgar Studios. The 73 year-old Tony and Emmy award winning actress plays the celebrated art historian, activist and ‘monstrous matriarch’ Kristin Miller who is at odds with her two sons and their partners who gather to celebrate her birthday. Central to the story is the debate about ‘bad’ sixties mothers and their abandoned-feeling offspring which surfaces when her recent memoir that omits her sons becomes a touchy subject. Quite brilliant,” wrote Ann Treneman in her Times review, Dominic Cavendish headlined his Telegraph review with “Stockard Channing is a contemptuous treat,” and ” Stockard Channing is in top form,” said Tom Wicker in The Stage.

I was very fortunate to see the play thanks to the generosity of Nick, a fellow ‘grapher, who I met at the stage door as we waited to meet Stockard prior to last Saturday’s performance. He had a spare comp ticket, which he kindly offered me. She popped out after the matinee to sign for us including this drawing and was very chatty and complimentary. So I got to see her on and off the stage – bonus!