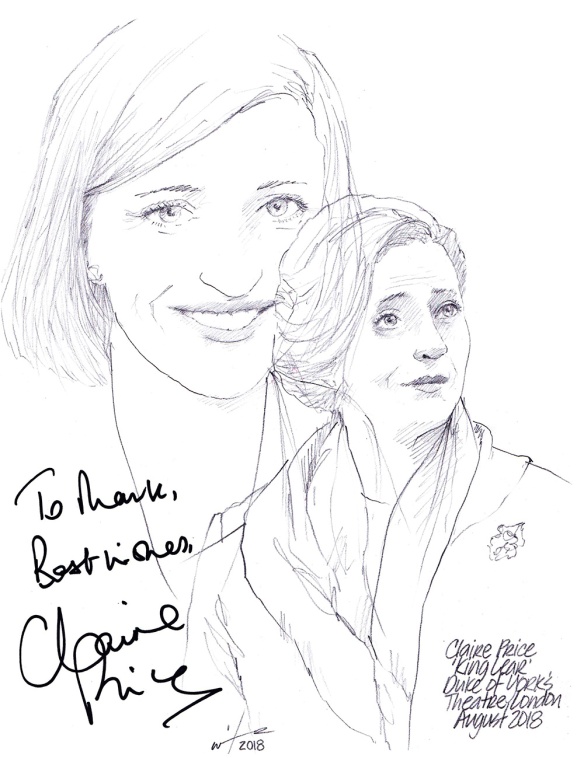 Claire Price joined the cast of Jonathan Munby’s KING LEAR, for its limited West End transfer to the Duke of York’s, after the productions critically acclaimed sell-out run at Chichester’s Minerva Theatre.

Claire plays the ruthless, uptight older sister Goneril… described by one reviewer as a ‘Sloaney, (for those not familiar with the term, it’s a portmanteau of Sloane Square in London’s Chelsea, famed for the wealth and affluent lifestyle of its residents) pearls-and-headscarf Goneril’.

Claire is no stranger to Shakespeare. Previous roles include Beatrice in MUCH ADO ABOUT NOTHING, Miranda in THE TEMPEST and Rosalind in AS YOU LIKE IT. She’s also well known to UK TV viewers as DS Siobhan Clarke in REBUS and many guest appearances on popular shows such as AGATHA CHRISTIE’S POIROT and MIDSOMER MURDERS.

Thankfully Claire is the complete opposite to her LEAR stage persona and signed my sketch at the stage door, heading in for last Saturday’s matinee, one of the 100 performances scheduled to finish in early November.

Playing the Earl of Gloucester in the Chichester Festival Theatre’s West End transfer, opposite Sir Ian McKellen’s tragic monarch, Danny is tied to a chair while his eyes are gouged out, cited by one critic as channeling Quentin Tarantino’s RESERVOIR DOGS. The blinding of Gloucester scene is considered by many who consider these things as structurally and conceptually the play’s centre piece.

Eight years ago Danny won the Off West End Best Actor Award for his portrayal of Ian, a seedy, hard-drinking journo in the revival of Sarah Kane’s provocative BLASTED at the Lyric Hammersmith. Set in a luxury hotel room in Leeds, Ian and his much younger girlfriend Cate’s tryst intentions are dramatically interrupted by a soldier with a sniper’s rifle and an explosion that reduces everything to a shattered ruin. Cate escapes, but Ian is anally raped and his eyes sucked out by the menacing military man.

He signed my Shakespeare sketch a few weeks back after a matinee performance at the Duke of York’s before he returned to have his eyes ripped out that evening.

Honeysuckle Weeks has a memorable stage name, so called because the fragrant climbing plant was in bloom at the time she was born 38 years ago. After graduating from Oxford University with an English degree in 2001, she embarked on an acting career that has spanned stage and screen.

She is best known on the small screen for her role as Samantha Stewart in ITV’s wartime drama FOYLE’S WAR. In 2010 she appeared in the West End run of Agatha Christie’s A DAUGHTER’S A DAUGHTER at the Trafalgar Studios and three years later played Cordelia in KING LEAR at the Old Vic.

She is currently starring in the West End debut of Gore Vidal’s THE BEST MAN at the Playhouse Theatre. I did this montage of Honeysuckle in all three stage roles and she signed it for me as she arrived at the Playhouse for last Saturday’s matinee.

After a decade, Sir Ian McKellen returned to play KING LEAR at the Chichester Festival Theatre in a sold-out five-week season late last year. Having played the role in Trevor Nunn’s 2007 production for the Royal Shakespeare Company, Sir Ian felt that performing it in vast theatre’s meant he declaimed lines that should have been more softly spoken or even whispered.

The contemporary retelling of Shakespeare’s most unforgiving tragedy in the intimate 280 seat, wrap around Minerva stage gave him that chance and at 78 he is closer to Lear’s age, which helped him achieve his aim: not to act Lear, but to be Lear in what is “probably his last big Shakespeare part,” according to a recent BBC interview.

The critics agreed, after six decades of acting, Sir Ian ‘reigned supreme’. “McKellen is never less than astonishing,” wrote Neil Norman in the Express, “McKellen is in full command of a lifetime’s acting technique,” said Mark Stenton in The Stage and ‘McKellen meticulously explores Lear’s delusions of grandeur,” exclaimed the Metro’s John Nathan.

I left this drawing at the theatre, which Sir Ian signed and dedicated with a bronze sharpie complete with a metallic glow on his insignia.

British actress Jane Horrocks played Regan, one of the declining monarch’s daughters, in the latest production of KING LEAR at the Old Vic. Small in statue, but huge on talent, the LITTLE VOICE star said “I relish my smallness. I really like my smallness,” in a Guardian interview earlier this year. She stands 5′ 4″ in ‘killer heels’ stalking about the stage ‘dangerously oversexed’ and ‘deliciously conniving’, complete with her signature shock blonde hair, seen recently in ABSOLUTELY FABULOUS: THE MOVIE, reprising her role as Bubble, the goofy sidekick of Jennifer Saunders and Joanna Lumley.

As always the amicable Jane signed my sketch at the stage door on her way into a Saturday matinee a few weeks ago.

Welsh actor Rhys Ifans returned to the London stage as the Fool in KING LEAR, which finished its run at the Old Vic last week. The production marked the theatrical comeback after 25 years of Glenda Jackson in the lead role. Although he had established himself with an extensive acting CV, Rhys became a global name as Hugh Grant’s lodger Spike in the 1999 film NOTTING HILL His scheming clown in LEAR received critical acclaim with the Telegraph’s Dominic Cavendish writing, “Definite highlights include Rhys Ifans as an anarchic Fool, in a Superman cape, donning a scary clown mask and sleeping out the storm in shopping trolley.” Rhys has already gone in by the time I got to the stage door, but popped out for a quite ciggy and a siggy on my sketch.

“Glenda Jackson’s performance will be talked about for years,” wrote Dominic Cavendish in his Telegraph review of Deborah Warner’s star-studded modern-dress production of KING LEAR, which has just completed it’s short run at London’s Old Vic. Twenty-five years after her last stage performance as Christine in Eugene O’Neill’s MOURNING BECOMES ELECTRA at the Glasgow Citizens, the 80 year-old, two-time Oscar winner made a ‘triumphant return to the stage’ with a “ferocious, unflinching performance that transcends gender and puts her amongst the best Lears,” proclaimed the Guardian’s Michael Billington.

In 1992 she became the Labour MP for Hampstead and Kilburn, winning four successive elections before retiring at the last election. It was suggested by more than one critic that her experience of political life and the injustices in the world enriched her understanding Lear. “Where does all her energy come from? Or that voice, which can blast out with a force to induce shockwaves? She is so pale, so spectre-thin with an androgynous crop of lankish hair… her neck pushes forward in vein-accentuating confrontation” continued the Guardian critic. Glenda was a little more subdued, thank goodness, at the stage door when she arrived for a Saturday matinee a couple of weeks ago and signed my drawing.

One of my favourite films is SHINE in which Geoffrey Rush won a truck-load of awards, including the Academy Award for his portrayal of pianist David Helfgott in 1997. He’s one of the few people to have collected the ‘Triple Crown of Acting’ – an Oscar, Emmy and a Tony – covering the big screen, small screen and the stage’s highest accolades. But, Geoffrey was in no rush (sorry) to take to the big screen. A ‘late bloomer’ who was 44 before embarking on his movie career. He’s has made up for it since. “I’m a stage actor, I was rolling along in theatre and having a good time. Movies was not where I was heading”.  Then his career turned a sudden corner with SHINE and, as he put it, “over indulged in cinema” and dropped out of theatre for a decade.

That all changed after a chance meeting with celebrated British director Stephen Daldry, who rekindled his theatrical roots. Having played the Fool twice in a 30 year journey with  Shakespeare’s KING LEAR, Geoffrey finally takes on the title role in the Sydney Theatre  Company’s production directed by long-time friend and collaborator Neil Armfield. It is “the greatest play in the English language, certainly Shakespeare’s greatest achievement,” Geoffrey said.

“Capturing characters whose estimation of themselves is completely out of step with reality is Rush’s metier. He does good self-delusion, particularly because he has within his Arsenal the vulnerability and anguish of someone when their delusions are punctured,” wrote Dee Jefferson in TimeOut.

I did this montage of Geoffrey expressing Lear’s pathos as the ‘wonderfully pathetic ex-King,” and mailed it to him in Australia. I noticed that there is my namesake, another ‘Mark Winter’ in the cast. Mark Leonard Winter plays Edgar, described in Dee’s four-star review as ” thrillingly on the verge… who appears to have gone mad in the process of going mad,” – a state I am familiar with, collecting signed sketches has its drawbacks. Maybe Geoffrey thought it was his fellow thespian, taking up his 4B pencil in a moment of admiration and gladly complied with the signing request, before realising that it was the ‘other’ Mark Winter. Returning it to the UK may have been a giveaway. Maybe not.

Simon Russell Beale is not only a great stage actor and an extremely pleasant chap to meet, he’s a brilliant subject to draw. Hence the frequency of my sketches of the man considered by many to be the best actor of his generation. This is in fact my second study of Simon as KING LEAR when he took to the vast Olivier stage at the National last Autumn in the exceptional Sam Mendes-directed production. This was the seventh Shakespearian collaboration for the actor-director combination. Jasper Kees commented in his article for The Telegraph that  when classical actors play HAMLET , a clock starts ticking down to his LEAR with a decent hiatus in between. He lists such notables as Ian McKellen, with a 36 year gap, 32 for Jonathan Pryce and 31 for Derek Jacobi. For 52 year-old Simon it was 14 years and if it wasn’t for Sam’s commitment to SKYFALL and CHARLIE AND THE CHOCOLATE FACTORY the gap would have been a lot less. however that hypothesis flies out the window when it was revealled that this is not Simon’s first LEAR. Oh no, he played the tragic monarch as a 17 year-old while still at Clifton College, so it’s a 35 year gap between LEARs for him, punctuated with a HAMLET.

That aside, I  caught up with Simon to sign my sketch at the Donmar Warehouse after a Saturday evenings performance of TEMPLE in which he  currently plays the Dean of St Paul’s Cathedral in Steve Water’s new play inspired by the London Occupy Movement and the events surrounding the hallowed venue in October 2011. As usual he was very gracious and happily signed this version of LEAR, remembering the zillions of others he had also graphed.