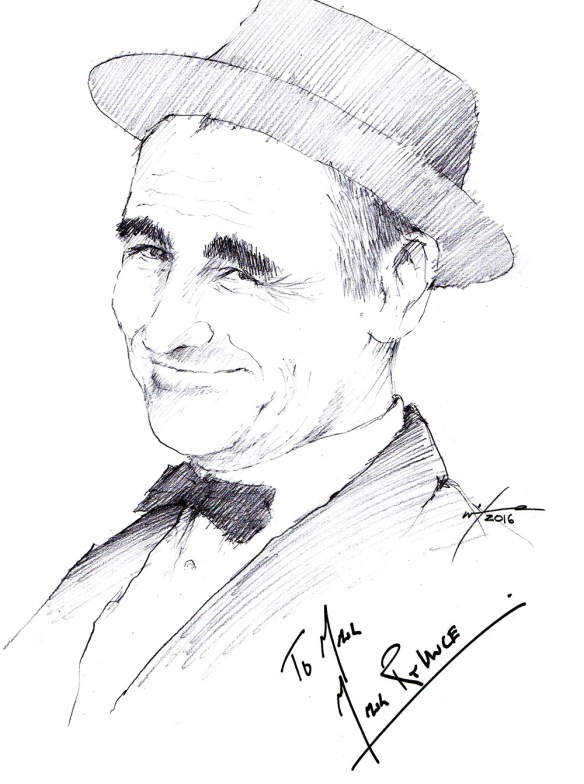 During the past eight years I have had the privilege of not only seeing British actor Mark Rylance on the London stage on many occasions, but meeting him, mainly at stage doors. I have also produced a similar number of drawings, which he has kindly graphed for me, often with a complimentary word or two, before getting on his bicycle and riding off to his South London home.

His many accolades, Tony, Olivier, BAFTA and now an Academy Award are acknowledgment to his brilliance. He is routinely described as the greatest actor of this generation and always receives the acclaim with grace and dignity… and usually his faithful black hat. I thought I don’t have a sketch of Mark with his hat! … so I did this one. Most of his memorable work has been on the stage rather than the screen. In fact he turned down a role in Steven Spielberg’s EMPIRE OF THE SUN to tread the boards at the National Theatre.

In a recent interview for the British GQ magazine, writer Ed Caesar described Mark in his intro as “a man powered by inner conflict and never more at peace than when the curtain rises.” But when he does do screen work, he really hits the mother lode. Mark eventually said ‘yes’ to Mr Spielberg, winning this year’s Oscar for his portrayal as soviet intelligence officer Rudolf Abel in BRIDGE OF SPIES and a BAFTA for his star turn as Thomas Cromwell in the BBC’s WOLF HALL.

Mark has returned to his beloved stage this winter, starring in his own play NICE FISH which he wrote with Louis Jenkins, directed by his wife Claire van Kampen. After a short run at the St Anne’s Warehouse in New York earlier this year, the production has transferred to the Harold Pinter Theatre in London’s West End, where I meet him again. No hat, or bicycle this time, but he did sign my ‘hat’ drawing with  his inimitable style.

‘Graph collecting in London in the dead of winter. What better than to stalk a Samuel Beckett play to match the cold, dark and bleak elements. The fourth revival in a decade of Beckett’s Endgame at the Duchess Theatre, considered along with Waiting for Godot to be among his most important works. One critic said it was like “watching a world edge into darkness.” Beeckett liked his plays to be as colourlesss as posssible. This one seems to be set in a grey area somehere near the end of the literary universe. The title is taken from the last part of a chess game, when there are very few pieces left. It involves four characters; Hamm, who is blind and unable to stand; Clov, a servant, unable to sit; Nagg, Hamm’s father with no legs and lives in a dustbin and Hamm’s mother, Nell, who also lives in a dustbin next to her husband and has no legs. Simon McBurney directed te production and played Clov, with Mark Rylance as Hamm. It also featured Tom Hickey as Nagg and Miriam Margolyes as Nell. The Duchess is on of the few West End Theatres to have veranda over the stage door, because it’s only a few metres away form the man entrance. However, on a particularly inclement November night in 2009, driving horizontal rain with extras rendered it useless – in fact it became a collection point for large quantities of H2O and acted as a a sieve. thankfully one drip landed on my caption text and not the artwork or sigs. God respects ‘graphers, me thinks.

American playwright David Hirson’s rollicking 1991 play La Bête is a comic tour de force involving Elomire (David Hyde Pierce), a hight-minded classical dramatist who loves only theatre, and Valere (Mark Rylance) a low-born street clown who loves only himself. When the fickle princess (Joanna Lumley) decides she’s grown weary of Elomire’s Royal Theatre troupe, he and Valere are left fighting for survival as art squares off with ego in a literary showdown.

La Bête completed its West End Season from June to August 2010 at the Comedy Theatre (now Harold Pinter) before transferring to the Music Box Theatre for a limited two month run on Broadway in September/October that year.

All three stars signed my sketches at the Comedy Theatre in London. 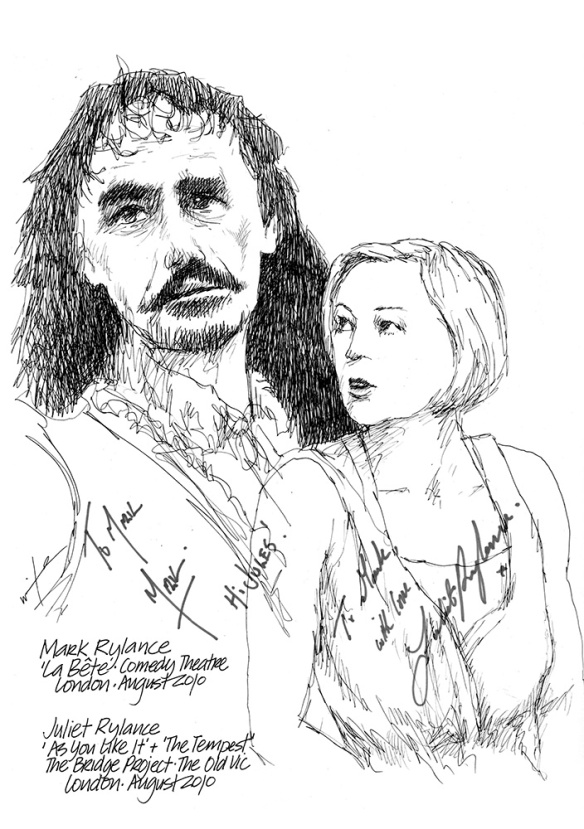 Juliet Rylance and her father, Mark, graced the London stage boards at the same time in different theatres during 2010. Mark featured in David Hirson’s comedy La Bête at the Comedy Theatre, and Juliet was in The Bridge Project’s Shakespearean double bill, As You Like It / The Tempest over at the Old Vic.

Mark signed my sketch first on the 10th August 2010, and Juliet a week later.

My other Mark Rylance drawings can be found here, here and here. 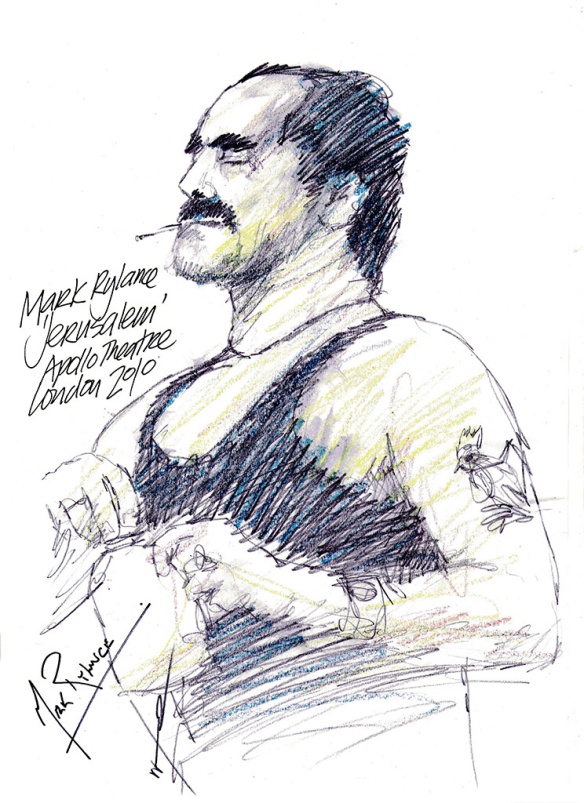 Mark Rylance won both the Olivier and the Tony Awards for his performance as Johnny ‘Rooster’ Byron – the opinionated eccentric in Jez Butterworth’s Jerusalem. “Rylance raises his game even higher and shows he is one of the greats,” said The Sunday Times. Time Out stated, “Believe the hype. Rylance’s astonishing final scene is as close to real magic as you’ll find.”

Mark signed this aqua-crayon and black conté sketch at the Apollo Theatre, London in February 2011.  For my black and white alternate see here.

Here are my drawings from Shakespeare’s Richard III and Twelfth Night at the Globe and Apollo Theatres. Loved both plays, the cast was amazing.

I met Mark Rylance tonight who is performing Richard III and Twelfth Night in repertory. He leads an all male cast – both brilliant plays. My drawings of the rest of the cast are here.

He slipped down to the stage door to have a sneaky ciggie, so I got his siggy and had a great discussion with him about playwriting. He’s just finished writing “Nice Fish” which will premiere in Minneapolis in April this year.

Thoroughly enjoyed watching “Jerusalem” on stage in the Westend a couple of years ago. So here’s my drawing – signed by Mark Rylance and Mackenzie Crook