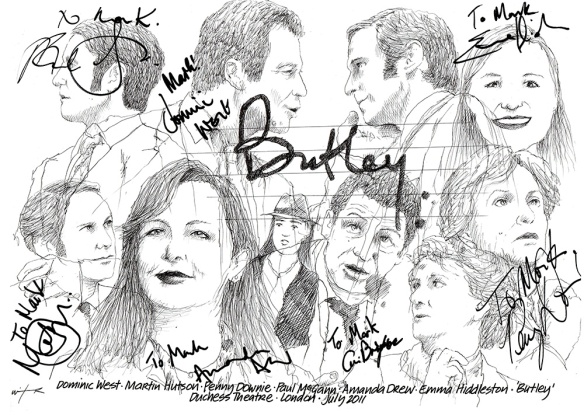 A summer’s day in London, and what better way to spend it than taking in a matinee of a West End play. Some may say there are better things to do on a summer’s day, but this is London and it was raining, (we had summer the weekend before). I chose the late Simon Grey’s dark comedy Butley at the Duchess. University lecturer, T.S.Eliot scholar and perpetual drunk Ben Butley is having a monumentally bad day, so bad, he’s making sure everyone else has a worse one. His trusty arsenal of mischievous irony and gleeful troublemaking prove to be the weapons of his own self-destruction. In the title role was the charismatic Dominic West, ably supported by a superb cast, Paul McGann, Amanda Drew, Martin Hutson, Penny Downie, Emma Huddleston and Cai Brigden. Last year I posted a couple of sketches  Dominic and Paul signed, but this black biro drawing included all seven cast members. It is,however, difficult to get stuff signed while inside the theatre watching the play, although I always think the best time to get everyone would be during the curtain call. Alas,not a plan shared by theatre management. Multiple cast can prove logistically difficult for obvious reasons, none more so than when they all leave at the same time it’s like trying to collect marbles rolling on a glass floor. The Duchess Theatre does have one thing going for the autograph aficionado, there’s only one entry and exit point, (as far as I know) to the left of the main doors and almost under cover, albeit under a leaking veranda. I had drawn this sketch earlier based on the promotional material adorning the theatre and managed to get it signed by all, either going in or coming out in  sig-friendly file. Even the late afternoon sun decided to shine on this successful summer’s saturday..momentarily.

Paul McGann starred alongside Dominic West in the revival of Simon Gray’s biting comedy Butley in the summer of 2011 at London’s Duchess Theatre after a gap of 40 years. Dominic took on the iconic title role of the boozing and abusing rapier-tongued uni lecturer Ben Butley, well-bent on self-destruction and Paul played Reg Nuttall, the eloquent, steely new to Yorkshire lover of Butley’s housemate Joey. The play premiered in 1971 in Harold Pinter’s award-winning production starring Alan Bates at the Criterion Theatre in London and was described as a ‘darkly comic assault on the soft underbelly of academia’.

‘Graph collecting in London in the dead of winter. What better than to stalk a Samuel Beckett play to match the cold, dark and bleak elements. The fourth revival in a decade of Beckett’s Endgame at the Duchess Theatre, considered along with Waiting for Godot to be among his most important works. One critic said it was like “watching a world edge into darkness.” Beeckett liked his plays to be as colourlesss as posssible. This one seems to be set in a grey area somehere near the end of the literary universe. The title is taken from the last part of a chess game, when there are very few pieces left. It involves four characters; Hamm, who is blind and unable to stand; Clov, a servant, unable to sit; Nagg, Hamm’s father with no legs and lives in a dustbin and Hamm’s mother, Nell, who also lives in a dustbin next to her husband and has no legs. Simon McBurney directed te production and played Clov, with Mark Rylance as Hamm. It also featured Tom Hickey as Nagg and Miriam Margolyes as Nell. The Duchess is on of the few West End Theatres to have veranda over the stage door, because it’s only a few metres away form the man entrance. However, on a particularly inclement November night in 2009, driving horizontal rain with extras rendered it useless – in fact it became a collection point for large quantities of H2O and acted as a a sieve. thankfully one drip landed on my caption text and not the artwork or sigs. God respects ‘graphers, me thinks. 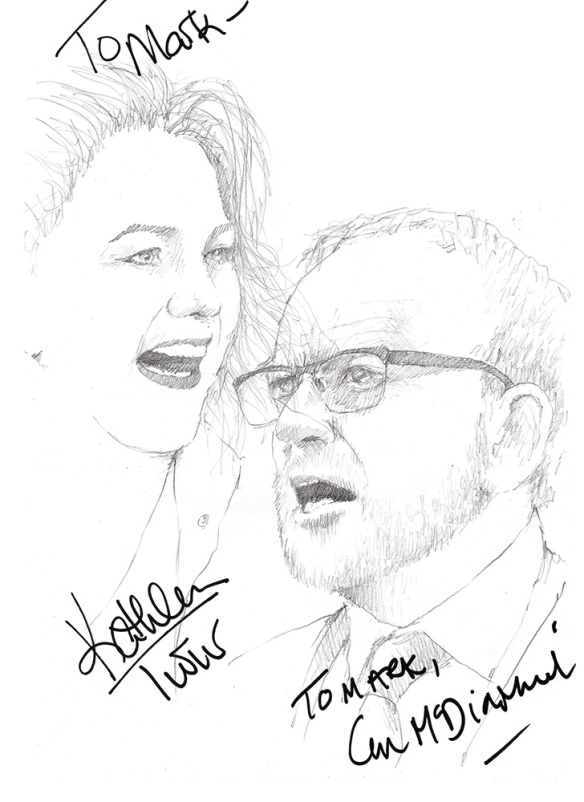 Bakersfield Mist marks the return to the London stage of multi award winner Kathleen Turner for the first time since her tour-deforce performance in Edward Albee’s Who’s Afraid of Virginia Woolf? She plays opposite Olivier and Tony winner Ian McDiarmid.

Inspired by true events, Stephen Sachs new play debates the nature of authenticity. Kathleen plays Maude, a boozy ex-bartender living in a Bakersfield trailer park who picks up what she claims is a Jackson Pollock for five bucks while trawling through a junk shop.

Ian is Lionel, a lecturer in Abstract Expressionism at Princeton University who is asked to verify the painting or declare it a fake. The play goes beyond the painting. It’s a culture clash between a woman desperately seeking validation for her life and a snobbish connoisseur of fine art. Which one is real?

While I was drawing the sketch I was reminded of Kathleen’s infamous line as the uncredited voice of Jessica Rabbit, Roger Rabbit’s flirtatious toon wife in Who Framed Roger Rabbit? In an interview she said it was just fun to do and that line was too good to pass up. Apparently half her autograph requests are to sign Jessica photos.

I met Kathleen and Ian after Wednesday’s (18 June) evening performance at the Duchess Theatre. They both liked the sketch and were happy to sign it. I was tempted to ask Kathleen to write her Jessica line, but maybe I’ll keel that request for another sketch. I think The Graduate would be more appropriate.

It was one of the undoubted hits of the 2012 Chichester Festival, The Resistible Rise of Arturo Ui with Henry Goodman in the title role transferred to London’s Duchess Theatre in September. It is a sharp and thrilling parable of the rise of Hitler, set in Chicago during the Great Depression of the 1930s – a perfect time for a small-fry crime boss and his mob of gangsters to make it big. “You simply can’t take your eyes off Goodman… He is horribly, hypnotically watchable,” said Charles Spencer for The Daily Telegraph.

“Henry Goodman is astonishing.. a virtuoso, vocally and physically.” – The Daily Telegraph
“Goodman dazzles,” from The Evening Standard. Time Out simply claims it’s “the best stage performance… this year.”

Henry has won two Olivier Awards, the first in 1993 for Best Actor in a musical in Assassins and for his role as Shylock in the National Theatre’s production of The Merchant of Venice, directed by Trevor Nunn in 2000.

Miss Polly Rae is one of the leading singers and dancers in the Neo-burlesque scene.

Fusing fashion, music and popular culture, her ‘Hurly Burly Show’ was the first major burlesque inspired musical spectacular to be staged in a West End Theatre, playing the Garrick in 2011.

Full of wit and joie de vivre, it transferred, it transferred for a 12 week limited season at the Duchess Theatre in 2012, where Miss Polly signed my sketch.

Winner of three Olivier Awards, Alex Jennings is one of Britain’s most revered actors and has been lauded as the new John Gielgud. His latest stage appearance was in the National Theatre’s critically acclaimed double bill, Untold Stories by Alan Bennett. Alex plays Alan in two autobiographical recollections “Hymn” a touching story of music and childhood and “Cocktail Sticks” which revisits some of the themes and conversations of the author’s memoir A Life Like Other People’s.

It transferred to The Duchess Theatre in April this year and completed its run last Saturday evening.

On press night, Alex stopped the curtain call applause to recall his old friend and colleague Richard Griffiths. He delivered a tear choked address and reminded the packed auditorium that the lights had been dimmed across the West End at 7.28pm in honour of the actor who had died the previous week following complications after a heart operation.