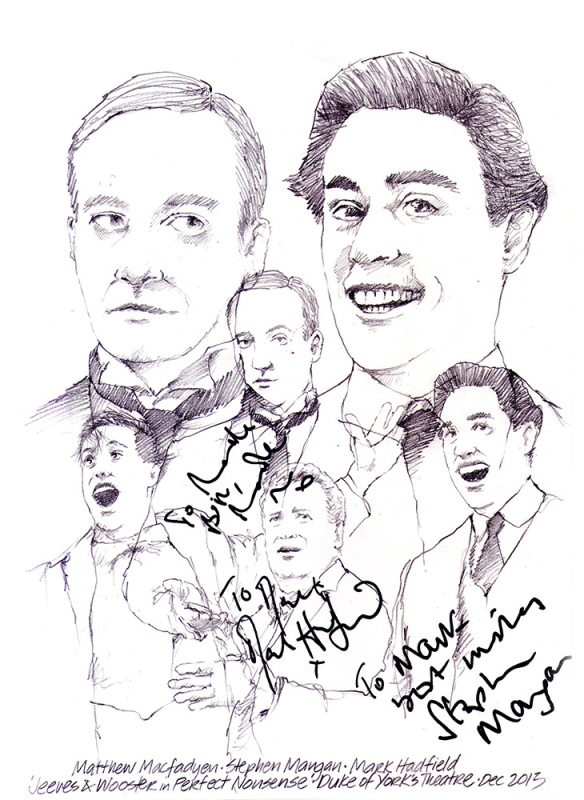 Jeeves and Wooster – Perfect Nonsense is the first ever stage play adapted from the works of PG Wodehouse. Directed by Sean Foley and written by brothers David and Robert Goodale, based on “Plum’s” 1938 novel The Code of the Woosters.

The show had pre West End dates at the Richmond Theatre and Theatre Royal, Brighton before beginning previews at the Duke of York’s Theatre in London in October 2013, officially opening on the 12 November. Originally scheduled to run until March 2014, it has now been extended until September due to popular demand.

Stephen Mangan is the effervescent, aristocratic Bertie Wooster and Matthew Macfadyen is his dutiful and imperturbable Jeeves… when he’s not impersonating a number of other characters such as old buffer Sir Watkyn Bassett, the myopic Gussie Fink-Nottle and the feminine Stiffy Bying. They are joined by Mark Hadfield as Seppings… when he’s not playing the imposing Aunt Dahlia or the incipient dictator Roderick Spode.

The trio signed my sketch this week at the theatre.

Alan Rickman originated the role of Leonard,a caustic professor in Theresa Rebeck’s SEMINAR, which had its World Premiere at the Golden Theatre on Broadway in April 2012. The play revolves around Rickman’s character conducting a ten-week-long writing seminar for four young novelists. I had met Alan a few times and I don’t think signing is one of his favourite chores, but he was very pleasant to chat with.

Many years ago I tried for a graph through the mail and was politely refused by his agent. I sent the sketch, thinking nothing to lose… except the sketch, of course! He was obviously signing at the stage door, but sending stuff to the venues is hit and miss, depending on their policy for unsolicited mail. To my delight the sketch was not only returned, pronto, but dedicated and signed by the other cast members – Lily Rabe, Jerry O’Connell, Hettienne Park and Hamish Linklater. So next time I see Alan, I won’t have to bother him for a sig and can thank him in person.

Here are my drawings from Shakespeare’s Richard III and Twelfth Night at the Globe and Apollo Theatres. Loved both plays, the cast was amazing.