The new musical EVERYBODY’S TALKING ABOUT JAMIE that generated a lot of buzz in Sheffield earlier this year has now transferred to London’s Apollo Theatre. Described as the ‘Billy Elliot for today’s generation’, it tells the story of Jamie New, a sixteen year-old schoolboy living on a Sheffield council estate who beats bullies and prejudice to go to the school prom in full drag. It’s based on the 2011 BBC documentary about secondary student Jamie Campbell’s ambition to become a drag queen.

The lead role is played by twenty-five year-old John McCrea who grew up near Sheffield and began his London stage career at the age of nine in CHITTY CHITTY BANG BANG at the Palladium. In his five-star review for the Independent, Paul Taylor wrote, “the extraordinary bravura of John McCrea’s performance is the right mix of sas and sensitivity and strength.” I caught up with John before Saturday’s matinee at the stage door where he signed this montage sketch for me.

Welsh actress Lisa Palfrey was appearing as Big Mama in the Young Vic’s West End production of Tennessee William’s CAT ON A HOT TIN ROOF at the Apollo Theatre… until an emergency appendectomy cut short her performance last month. Initially understudy Kate Britain covered until Kiwi actress Kerry Fox stepped into the role until Lisa recovered. She signed this sketch for me a week before the unscheduled appendix removal. 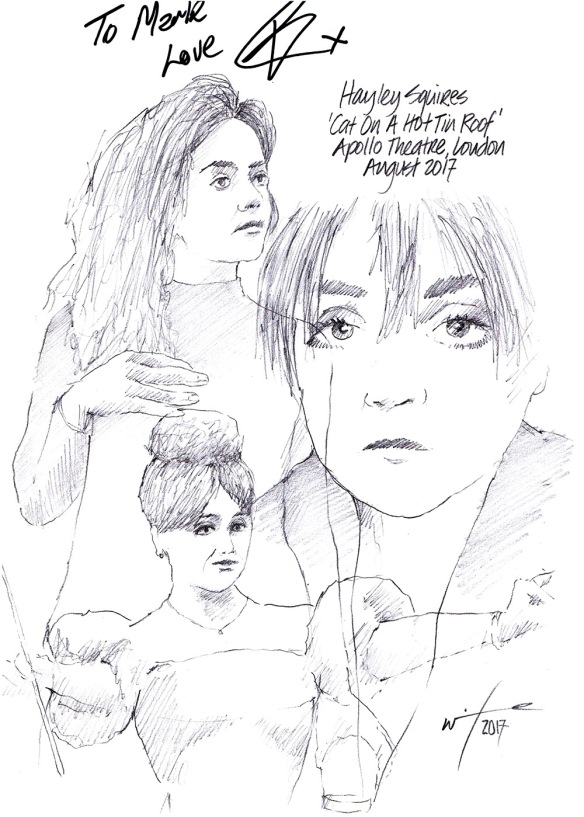 Hayley Squires performance as single mum Katie in Ken Loach’s multi-award winning film I, DANIEL BLAKE catapulted her into the international spotlight, earning a BAFTA nomination and winning a number of accolades including the Evening Standard British Film Award for Best Supporting Actress. Her latest role is the complete opposite, making her West End debut in the Young Vic production of Tennessee William’s steamy southern family drama CAT ON A HOT TIN ROOF opposite Sienna Miller and Jack O’Connell at the Apollo Theatre. Hayley plays Mae, the scheming sister-in -law which The Times critic Ann Treneman called a “stand-out performance.” She signed my drawing a month ago at the stage door.

Irishman Brian Gleeson, together with father Brendan and older brother Domhnall form a formidable family trio of actors. Since starting his career in 2006 alongside his father in John Boorman’s THE TIGER’S TAIL, Brian has balanced his work between stage and screen. All three actually appeared on the Dublin boards together for four weeks in Enda Walsh’s THE WALWORTH FARCE in 2015.

He is currently playing Brick’s (Jack O’Connell) conspirational brother Gooper in the Young Vic’s West End revival of Tennessee William’s CAT ON A HOT TIN ROOF at the Apollo, where he signed my sketch for me last week. 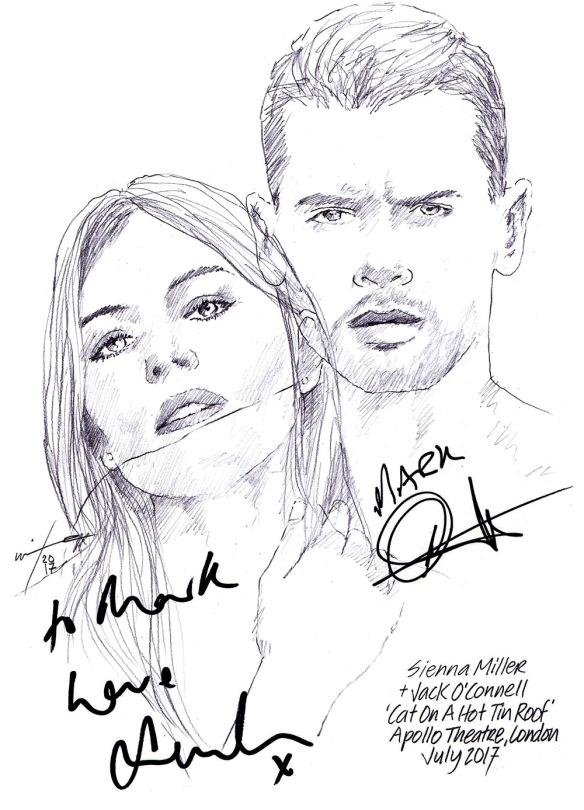 “Benedict Andrews radical update of the classic delivers emotional intensity shot through with humour- and a blistering performance from Jack O’Connell”, wrote Michael Billington in the intro to his Guardian review. The Telegraph’s Dominic Cavendish, who admitted he initially was going to write it off as a summer filler, saw the production and gave it four stars, adding, “Miller confirms she’s not just a pretty feline face… her Margaret is a hideously plausible portrait of a women putting on a grave face to hold back tears desolation.”

On a very wet Saturday lunchtime Sienna arrived at the stage door and signed for all who were waiting including my sketch, under the small covered doorway. Jack rides his bike, complete with helmet, so he flies in with no one recognising or stopping him. It took me a couple of return visits to figure this out, so last Saturday, when he did the same I managed to get his attention and his graph before he disappeared into the theatre and on stage for the matinee.

Colm’s last London stage appearance was in Eugene O’Neill’s A MOON FOR THE MISBEGOTTEN opposite Kevin Spacey at The Old Vic in the Autumn of 2006. He signed this sketch of him as Big Daddy a few weeks ago at the stage door before a Saturday matinee. 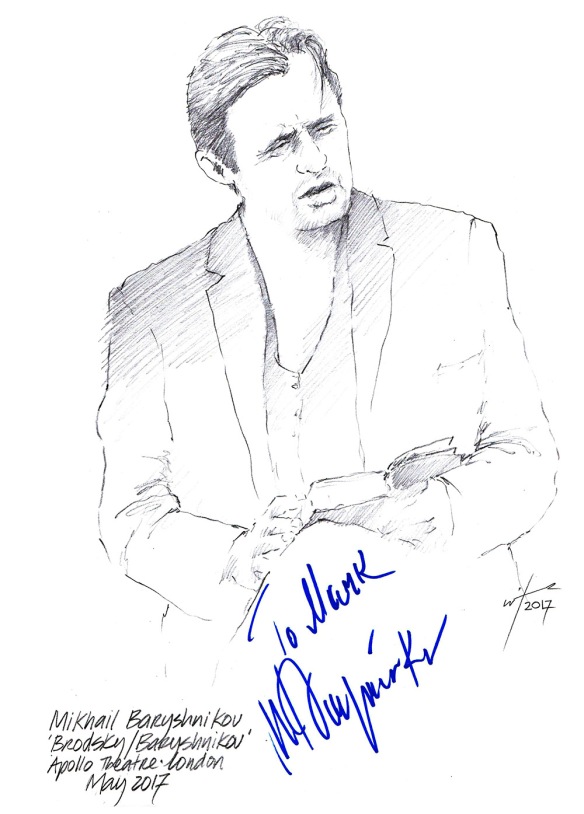 Alongside Vaslav Nijinsky, Vladimir Vasiliev and Rudolf Nureyev, Mikhail Baryshnikov is  considered one of the greatest ballet dancers in history. He returned to the London stage last week, not as a dancer, but reading the poetry of Nobel Laurate Joseph Brodsky, who was one of the first people Mikhail meet in New York  when he defected from the Soviet Union in 1974.

Joseph was a huge influence on ‘Misha’ In the years the later revolutionised and popularised ballet as a performer and choreographer, while launching a successful parallel career as an actor, earning an Oscar nomination playing Yuri Kopeikine in the 1977 film THE TURNING POINT. Their relationship forms the basis for Latvian director Alvin Hermanis’s experimental theatre piece, BRODSKY/BARYSHNIKOV in which Mikhail reads his friend’s poetry in the original Russian. After productions in Riga, Te Aviv and New York Mikhail, performed the show for five nights at the Apollo Theatre in London, where I managed to meet him at the stage door and he signed my sketch.

For his last West End role Freddie Fox had less than 48 hours notice. It was just the minor part Romeo opposite Lily James in Kenneth Branagh’s ROMEO & JULIET at the Garrick Theatre last year, after the previous lead Richard Madden and his understudy Tom Hanson  took the phrase ‘break a leg’ a bit too literally. He got the call on Friday and “they wanted me on stage Saturday” he said. Technically he knew the role, having played it 10 months earlier at The Crucible in Sheffield. He described the first night as ‘a memory test’ an making sure he stood in the right play and not fall off the stage.

For his next trick, Freddie’s latest stage appearance as the avant-garde dandy Tristan Tzara in Tom Stoppard’s ‘fiendishly-complicated’ TRAVESTIES, he had months to prepare. Directed by Patrick Marber, the Menier Chocolate Factory production sold out before it opened at the off-West End venue before transferring to the Apollo. It weaves together a fictionalised meeting between Vladimir Lenin, James Joyce and the Romanian-French writer Tzara in Zurich in 1917.

In his four-star review for the Evening Standard, Henry Hutchings wrote, “It’s Freddie Fox who dazzles, revelling in the anarchic energy of a character who’s part nuisance, part genius.”  It’s a performance that has earned him a nomination for the best Supporting Actor Olivier Award at next month’s ceremony. Freddie signed this sketch for me at the stage door between shows last Saturday. 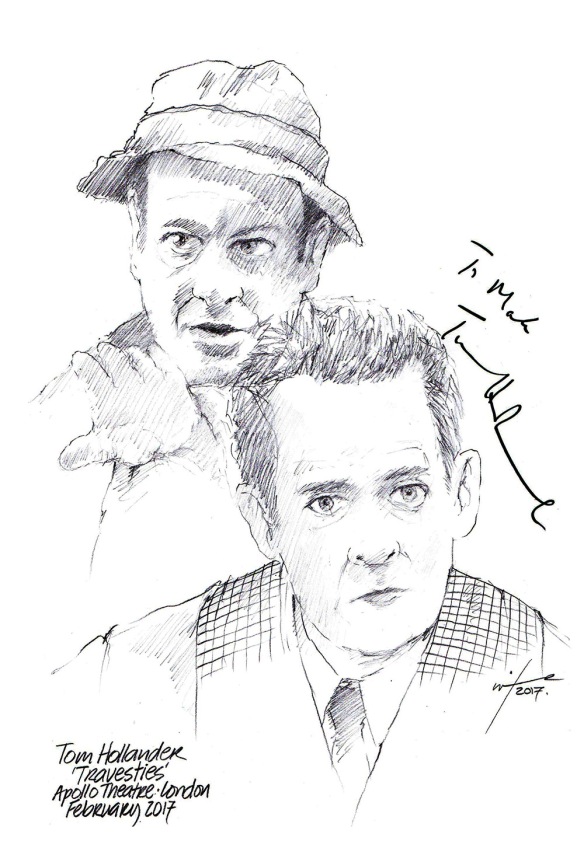 Tom Hollander’s welcome return to the stage after a six-year absence has resulted in a Best Actor Olivier Award nomination for his ‘career-best’ performance in Tom Stoppard’s golden oldie TRAVESTIES. The Menier Chocolate Factory’s revival, directed by Patrick Marber, sold out before opening night late last year and transferred to the West End’s Apollo Theatre.  Tom plays the central Henry Carr, who  was a British consular official in Zurich during the first World War and encountered  Russian communist revolutionary Lenin, the founder of Dada, Tristan Tzara and Irish author James Joyce, all of whom were in the city at the time. As a member of a group of actors called The English Players, managed by Joyce, he was cast in the leading role of Algernon in Oscar Wide’s THE IMPORTANCE OF BEING EARNEST.

In his five-star review, The Telegraph’s Dominic Cavendish said “Tom Hollander is hilarious in this mind-bogglingly entertaining Stoppard revival”. He went on to write, “Tom Stoppard’s award-winning 1974 comedy finds the man, who memorably described himself as a ‘bounced Czech’ performing such hire-wire feats of linguistic daring that even undertakes an entire scene in the limerick form. And that’s not the half of it: there are exchanges in Russian, outbreaks of nonsense, a super-abundance of allusion, word-play, parodies and to crown it all, a running pastiche of THE IMPORTANCE OF BEING EARNEST.” Tom signed my sketch of him as Henry at the Apollo’s stage door last weekend.

British actress Gemma Arterton has been the subject for a number of my theatrical renderings and here’s another one. It must have something to do with the fact she has ‘art’ in her name. I drew two sketches of her as NELL GWYNN, one a single portrait and this montage of her as the the celebrated 17th century actress and mistress to Charles II, when she appeared in the Globe’s transfer of Jessica Swale’s play at the Apollo theatre last year.

She signed the portrait there and I was passing the Donmar Warehouse on Saturday and she happened to be outside the front doors signing after the final matinee performance of George Bernard Shaw’s SAINT JOAN after a two-month run. Following her triumph at the Apollo, Gemma’s portrayal of the feminist icon and spiritual warrior was equally acclaimed in the Josie Rourke-directed contemporary production. I also happened to still have this sketch in my folder, which she was happy to also sign.