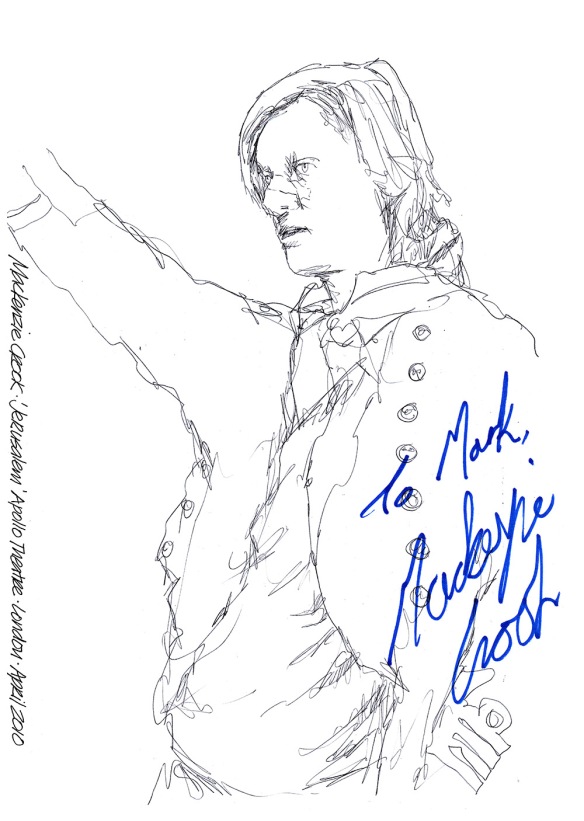 Mackenzie Crook is probably best known from TV’s The Office and Game of Thrones, or as Ragetti in the Pirates of the Caribbean Films.

A fellow illustrator and cartoonist, but it was his comedy sketches that dictated his career more. He wanted to be a graphic artist, but after being turned down three times by the Kent Institute of Art & Design he became a comedian alongside Iain Lee as ‘the cheeky, chirpy, chappy Charlie Cheese from Chorley’.

It was his stage work that gave me the opportunity to meet him. He received rave reviews as Ginger in Jez Butterworth’s Jerusalem which transferred from London’s Royal Court Theatre in August 2009 to the Apollo in the West End before a stint on Broadway where he was nominated for the Tony award for Best Featured Actor in a Play.

I drew this minimal line sketch of Mackenizie and met him at the Apollo stage door, where his sketches illustrated the Jerusalem programme. I gave him a copy of this sketch, which he then asked me to sign – a first for a sig-seeking-sketching-stalker.

As a teenager he inherited a rare breeding pair of Mediterranean spur-thighed tortoises, leading to a hobby of breeding chelonians (the scientific name for turtles and the such like). I used to have a turtle called Algernon or ‘Algae’ for short cos he was green! Another conversation point, but that’s another story. He did uses his turtles in the play!