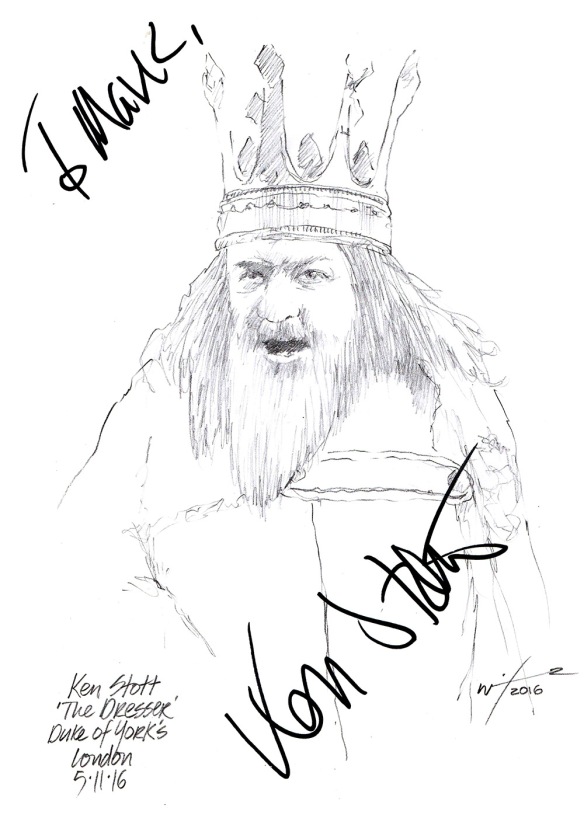 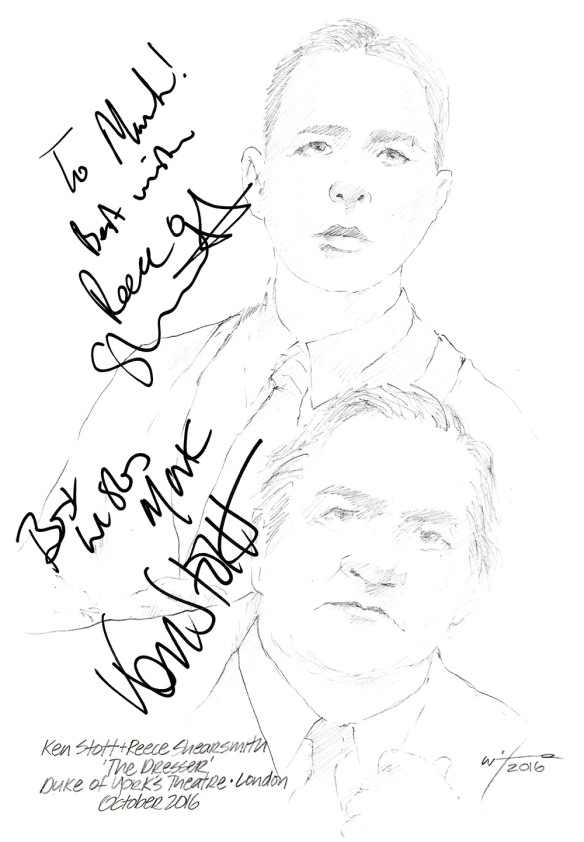 THE DRESSER, considered Ronald Harwood’s greatest play, returned to the West End this month at the Duke of York’s Theatre with Ken Stott as ‘Sir’ and Reece Shearsmith as his devoted dresser Norman, directed by Sean Foley.

The story of an ageing actor’s personal assistant who struggles to keep his charge’s life together takes place over the course of one night in a small English regional theatre during the Second World War. It’s based on Sir Ronald’s own experience as the dresser for English actor-manager Sir Donald Wolfit who is the model for ‘Sir.’

The Oscar-winning playwright is always puzzled by the play’s popularity. When it opened at Manchester’s Exchange Theatre in 1980 he thought it would only last six weeks. It’s been a long six weeks. The original production transferred to the Queen’s Theatre in London’s West End a few months later before moving to Broadway and in 1983 a film starring Albert Finney as Sir and Tom Courtenay as Norman (who reprised the role in both stage and screen versions) was released. In all formats THE DRESSER was nominated for multiple Olivier, Tony and Academy, BAFTA and Golden Globe Awards.

I caught up with Ken and Reece earlier this week at the Duke of York’s during previews before tomorrow night’s opening and they signed my Dresser drawing for me. 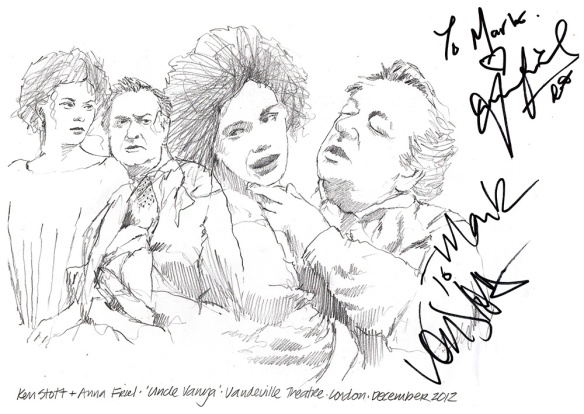 My favourite critic, The Telegraph’s Tim Walker, gave it five stars in what he called, “a joyfully depressing revival… If you are into depressing plays, this production is, paradoxically, an unalloyed joy.”

The date was the twelfth of December 2012, or in numerical formation 12/12/12 . One would have to do something special to mark the occasion, so one decided to try and get 12 theatre sketches signed on that auspicious day. That plan was quickly downsized due to the logistical barriers relating to the timing of entrances and exits at the various theatres. I ended up getting two, but they were good ones. … so thanks to Ken and Anna for marking this special day.

Ken Stott, the Scot, better known to cinema goers as the dwarf Balin in the current Hobbit trilogy, is an accomplished theatre thespian. His most recent West End appearance was the lead in Chekhov’s Uncle Vanya. Theatre critic Tim Walker, writing in The Telegraph said, “Good for Lindsay Posner, the director of this pitch perfect production for not choosing a big star name to play the title role but a proper, solid stage actor in Ken Stott”.

I sketched Ken as the tragic protagonist Eddie when he starred in the revival of Arthur Miller’s A View from the Bridge at the Duke of York’s in early 2009. He played an Italian-American longshoreman on the New York docks. The production drew media attention when Ken halted a performance to demand a group of rowdy school children be removed from the audience, who supported him by shouting, “out, out, out.” After a 15 minute stand-off the offending juveniles were removed…