Ken Stott and Reece Shearsmith has been gathering rave reviews for their performances as Sir and Norman respectively in Sean Foley’s excellent revival of  Ronald Harwood’s classic play THE DRESSER, which ends its run at London’s Duke of York’s theatre next week. I drew a sketch of them together and  also individual  character drawings which they both signed at the stage door. This  is Reece in a ‘Norman’ montage  as the officious gate-keeper to Sir’s lair.

In his review, The Telegraph’s Dominic Cavendish called Reece’s performance as a ‘revelation’ and said, “There’s simply not a line mistimed, a movement misjudged and the particular triumph is that the 47-year-old comic actor takes us from entertaining,surface-polished camp mannerism, lots of limp wrists and arch, waspish asides, to a placed psychological perturbation, no less harrowing  or stirring than the madness that afflicts his employer.”

Simon Rouse plays the Fool… and plays the Fool very well in Sean Foley’s polished revival of Sir Ronald Harwood’s classic play THE DRESSER, about ‘Sir’, a veteran Shakespearean and his loyal dresser touring in the shadow of World War Two at the Duke of York’s. ‘an absolute delight’ and a ‘glorious cameo’ are two of the reviewers descriptions of his foolish performance.

Simon’s recent London appearances included JB Priestley’s WHEN WE WERE MARRIED at the Garrick over the Winter of 2010/11 and his role as Gerald in the UK tour of the stage production of Simon Beaufoy’s 1997 comedy-drama film THE FULL MONTY which transferred to the West Ends Noel Coward theatre in 2014. On the small screen Simon devotees will know him as Detective Chief Inspector Jack Meadows in the ITV long-running police drama THE BILL and he popped in CORONATION STREET as Rita’s ex-lover Rusty a few years back.

Anyway back to the Fool. Simon’s actual character is ageing actor Geoffrey Thornton who is part of a ‘war-surplus cast of cripples, old men and pansies’, and makes his debut in KING LEAR as the Fool, keen to impress ‘Sir’. He certainly impressed the critics with The Telegraph’s Dominic Cavendish writing. “Simon Rouse is memorably awful (no doubt meant in a good way) as the hastily recruited stand-in for The Fool.”

British actress Phoebe Sparrow returns to the London stage in Sean Foley’s revival of Ron Harwood’s THE DRESSER after making her debut in FATHER AND SONS at the Donmar Warehouse in June 2014. Phoebe plays the ambitious young actress Irene whose infatuation with ‘Sir’ and his growing reciprocation of her attention undermines Norman’s efforts to keep the company in order. As The Stage critic Mark Shenton  puts it, “she put’s her legs up, to get a leg up.” Fans of the hit TV drama series DOWNTON ABBEY will be familiar with Phoebe’s recurring role as Amelia Cruickshank, Larry Grey’s fiancé.

I caught up with Phoebe after seeing the production at the Duke of York’s Theatre earlier in the month, where she signed this sketch for me. 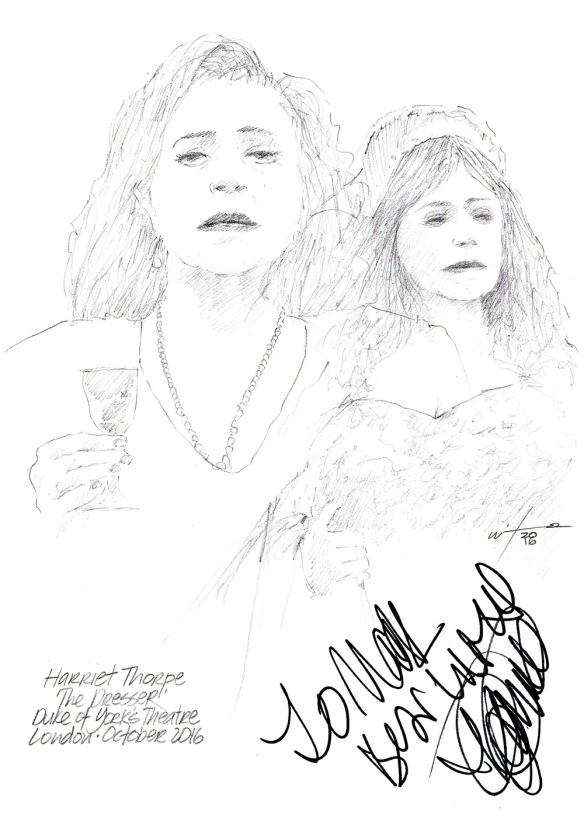 British actress Harriet Thorpe’s most recognisable TV roles are receptionist Carole in THE BRITTAS EMPIRE and Patsy’s eccentric chum Fleur in ABSOLUTELY FABULOUS, a role she revised in the film adaption this year. She’s also appeared in a few films, including CALENDAR GIRLS and actually played the elderly witch Wakanda in a deleted scene from HARRY POTTER AND THE DEATHLY HALLOWS PART 1. On stage Harriet had several seasons with the National Theatre and has worked extensively in the West End including Madame Thenardier in LES MISERABLES. She has returned to the London boards in the role of Sir’s faithful wife, ‘Her Ladyship’ in the revival of Ron Harwood’s THE DRESSER at the Duke of York’s, where I meet Harriet after the evening performance last Saturday and she signed my drawing.

Selina Cadell has, as they say a ‘face that is tantalisingly familiar’. That is because the well known English actress has appeared on stage and the small screen for over thirty years. Her most recognisable role is probably Mrs Tishell, the overwrought pharmacist in a neck brace in DOC MARTIN.  But many will recall her familiar face in JEEVES AND WOOSTER, THE CATHERINE TATE SHOW, FATHER BROWN and VICTORIA WOOD among a whole host of others. She played the vanishing lady herself, Miss Froy in the BBC TV film THE LADY VANISHED. In theatre Selina has an equally long list of appearances, including the Sam Mendes’ acclaimed Broadway production of Anton Chekhov’s THE CHERRY ORCHARD and her role as  Maria in TWELFTH NIGHT for the Donmar Warehouse in both London and New York.

She has returned to the West End as the pragmatic and cynical but highly efficient stage manager Madge in Ron Harwood’s classic 1980 play THE DRESSER at the Duke of York’s Theatre. When I asked her to sign this drawing  in the role she said, “How very sweet” and did so.

THE DRESSER, considered Ronald Harwood’s greatest play, returned to the West End this month at the Duke of York’s Theatre with Ken Stott as ‘Sir’ and Reece Shearsmith as his devoted dresser Norman, directed by Sean Foley.

The story of an ageing actor’s personal assistant who struggles to keep his charge’s life together takes place over the course of one night in a small English regional theatre during the Second World War. It’s based on Sir Ronald’s own experience as the dresser for English actor-manager Sir Donald Wolfit who is the model for ‘Sir.’

The Oscar-winning playwright is always puzzled by the play’s popularity. When it opened at Manchester’s Exchange Theatre in 1980 he thought it would only last six weeks. It’s been a long six weeks. The original production transferred to the Queen’s Theatre in London’s West End a few months later before moving to Broadway and in 1983 a film starring Albert Finney as Sir and Tom Courtenay as Norman (who reprised the role in both stage and screen versions) was released. In all formats THE DRESSER was nominated for multiple Olivier, Tony and Academy, BAFTA and Golden Globe Awards.

I caught up with Ken and Reece earlier this week at the Duke of York’s during previews before tomorrow night’s opening and they signed my Dresser drawing for me.

There’s maybe a dozen actors that I truly admire, some dead at the moment. But very much alive is Tom Courtenay…correction, Sir Tom Courtenay. He was knighted by the Queen in 2001. On a much earlier visit  to the Palace (1965 to be precise) at a reception for Doctor Zhivago in which a not-yet-knighted Tom played Pasha Antipov, Her Majesty apparently noticed his shyness and was said to have remarked,”Look at him…and to think he’s just lead a revolution.” My favourite film and play in which the shy-yet -to -be sir starred is Ray Harwood’s The Dresser. There’s a ‘Sir’ in it, but Tom didn’t play him. He played Norman, an ageing actor’s personal assistant who struggles to keep ‘Sir’s’ life together.  He  played Norman right from the start. The 1980 stage version transferred from Manchester’s Royal Exchange Theatre to the Queen’s Theatre in London’s West End before moving to Broadway the following year and earning Tom a Tony Award nom. Two years later the film , directed by Peter Yates was released, earning five Academy Award nominations, including one for Tom and for Albert Finney as ‘Sir’. They were both also nominated for a BAFTA and a Golden Globe, with Tom picking up the later. Despite his cinematic accolades, Tom prefers his first passion-the stage, which he has excelled in equal measure.  One of his solo performances is in Pretending To Be Me, based on the letters and writing of poet Philip Larkin. I drew this sketch of the now-Sir Tom and was planning to ask him to sign it at the British Film Institute earlier this month. He was doing a Q&A after the screening of his latest film 45 Years with Charlotte Rampling in which both won acting Silver Bears at this year’s Berlin Film Festival. I didn’t however, so I posted it to him and he kindly sent it back adding a compliment.