Veteran Australian actor Hugo Weaving returned to the London stage last month in the National Theatre’s production of Fredrich Durrenmatt’s visionary 1956 revenge play THE VISIT or THE OLD LADY COMES TO CALL, directed by Jeremy Herrin. Adapted by Tony Kushner and set in mid-twentieth century, in Slurry, a poverty-stricken industrial town in Western, New York where billionaire heiress Claire Zachanassian returns after leaving 45 years earlier as a pregnant 16 year-old to seek revenge on her former lover Alfred Ill, who dumped her back then. The locals hope her arrival signals a change in their fortunes, but they soon realise that prosperity will only come at a terrible price. Hugo played Alfred and Lesley Melville was Claire.

The production unfortunately was cancelled in mid-March due to the coronavirus pandemic, but Hugo signed and returned my drawing of him as Alfred I left at the National’s stage door before final curtain. 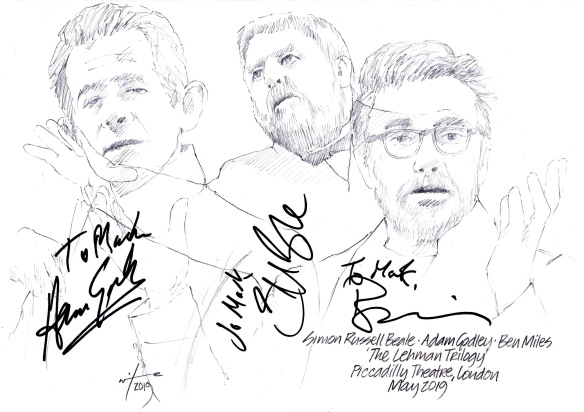 Sam Mendes has always directed exceptional stage productions. His latest, THE LEHMAN TRILOGY is no exception. Italian dramatist Stefano Massini’s three act/three-actor play is an astonishing piece of storytelling about three German-Jewish immigrants who would come to define America. It charts three generations of the Lehman family, who establish one of the world’s biggest financial corporations in 1844 through to it’s spectacular collapse and bankruptcy in 2008, triggering the largest financial crisis in history. Adapted by the National Theatre’s deputy artistic director Ben Power, THE LEHMAN TRILOGY completed a sell-out season on the Lyttelton stage last July, followed by a limited run at the New York’s Park Avenue Armoury earlier this year, before returning to London’s West End and the Piccadilly Theatre until August.

Three remarkable actors -the ‘black-clad trio-not only play the three founding brothers, but Simon Russell Beale as Henry, Ben Miles as Emanuel and Adam Godley as Mayer also portray their children and grandchildren and various minor characters spanning 164 years. All three were nominated for this years Best Actor Olivier Award, as was Sam for his direction.

Andrzej Lukowski’s TimeOut review said that their ‘virtuosic performances’ turn “a play that might have come across as a rather a dry history lesson into a mostly electrifying one.”

Simon, Adam and Ben kindly signed my rehearsal drawing of them during the first week of their Piccadilly run. 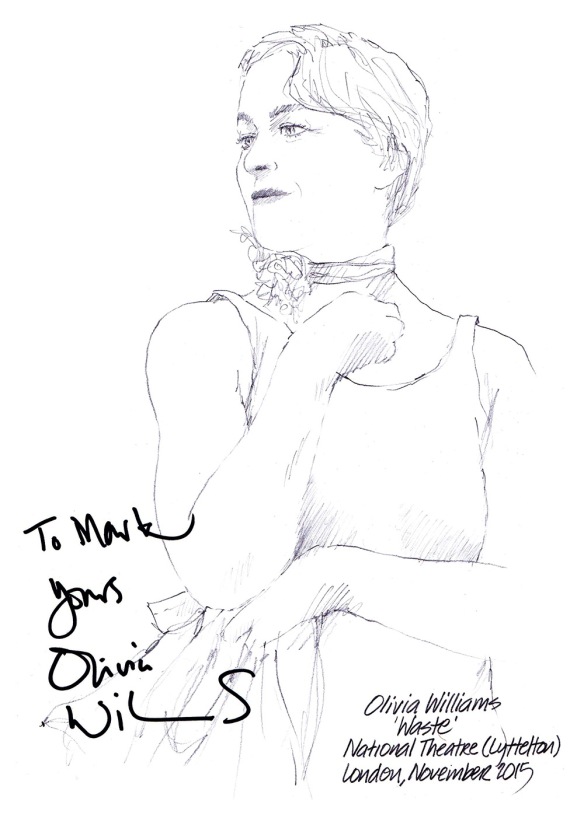 “Olivia Williams steals the show,” was the headline for Dominic Cavendish’s review of WASTE at the National Theatre’s Lyttelton stage in late 2015.

Writer Harley Granville Barker’s 1907 version of his play was banned by the Lord Chamberlain, but was rewritten twenty years later and finally staged in public at the Westminster Theatre in 1936. The story is a combination of the three big themes, sex, politics and religion. Ambitious and independent politician Henry Trebell plans to introduce legislation to disestablish the Church of England and distribute its huge wealth to education. But, after election victory and success almost assured he suffers a fall from grace, impregnating the wife of a former Irish Republican, Amy O’Connell, who dies after a botched abortion. Roger Michell’s revival used the 1927 version, featuring Charles Edwards as Henry Trebell and Olivia Williams as Amy O’Connell.

“The night’s laurels belong, in the end, to Williams’s cloche-hatted anti-heroine whose tearful, vituperative, revulsion-filled showdown with Trebell has you on the edge of your seat,” concluded Dominic’s review.

After graduating with an English Lit degree from Cambridge University, Olivia studied drama at the Bristol Old Vic, followed by three years with the Royal Shakespeare Company. She made her film debut in 1997 alongside Kevin Costner in THE POSTMAN and has since appeared in such notable productions as THE SIXTH SENCE and AN EDUCTION, receiving critical acclaim and awards recognition in 2010 for her performance in Roman Polanski’s THE GHOST WRITER.

She is currently filming Florian Zeller’s movie version of his hit play THE FATHER with Anthony Hopkins and Olivia Colman, which is also being directed by the French playwright.

Olivia returned to the Lyttelton stage this spring to play Orgon’s wife Elmire in Moliere’s TARTUFFE, where she signed my sketch.

“It’s not about refugees, it’s about humans,” said Syrian actor Ammar Haj Ahmad in a recent interview about the theatrical phenomenon, THE JUNGLE in which he stars and leads a multinational, multiethnic cast, vividly recreating the life in the sprawling makeshift camp called ‘the jungle’ in Calais on France’s northern coast, where thousands gathered from all corners of the world to escape war and terror, hoping to cross the English Channel and build a new life.

Ammar plays Safi, the main spokesperson for the Jungle’s inhabitants, who also functions in the play as the guide and chronicler. In 2011, Ammar was a cast member in a production of the Arabian classic ONE THOUSAND AND ONE NIGHTS, which completed its global tour in Edinburgh. His visa ran out, but the crisis back in this homeland had escalated to the point where he felt he could not return. He contacted the British Home Office to apply for asylum and the 36 year-old has not returned to Syria since.

The Broadway-bound National Theatre and Young Vic co-production with the playwrighters Joe Murphy and Joe Robertson’s Good Chance Theatre premiered at the Young Vic last November. Directed by Stephen Daldry and Justin Martin, it transferred across the river to the Embankment’s Playhouse Theatre earlier this year where it resides until 3 November before crossing a bigger stretch of water to New York.

The sell-out production received a powerful reaction. Audiences and critics were blown away. The Telegraph’s Dominic Cavendish has called it “the most important play in the West End.” The immersive nature of the play, which transports everyone into the jungle itself is “an experience we do together- actors and audience,” said Ammar. “I am truly grateful to be part of theatre that makes a difference.”

I met Ammar at the stage door after a Saturday matinee a few weeks ago where he signed my sketch. 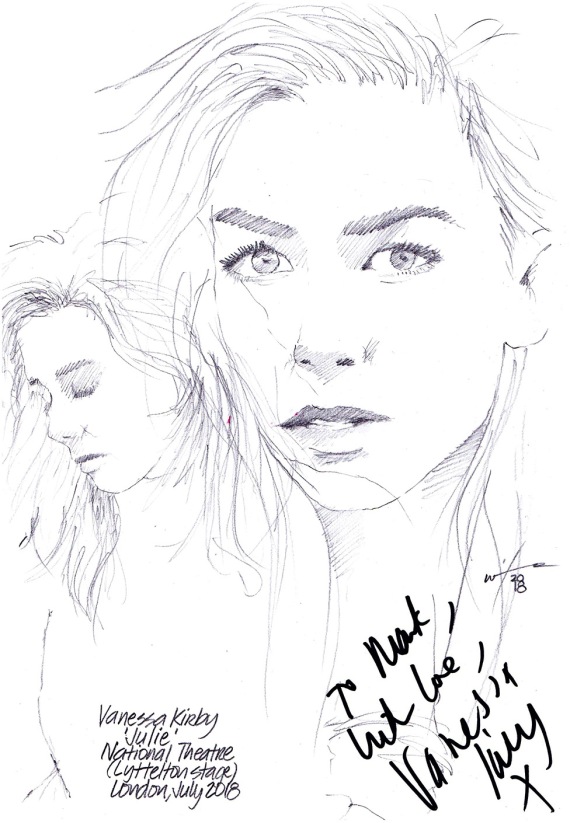 Vanessa Kirby’s impressive stage career is being matched by her latest screen appearances, in particular her mesmerising two-year role as Princess Margaret in Peter Morgan’s Netflick series THE CROWN, for which she won this year’s Supporting Actress TV BAFTA Award, after being nominated last year. She also collected an Emmy nomination.

She can also be seen as White Widow in the latest MISSION: IMPOSSIBLE blockbuster, FALLOUT opposite Tom Cruise. In 2106 Variety labelled her “the most outstanding stage actress of her generation, capable of the most unexpected choices.”

Vanessa signed a sketch for me in 2104 at the Young Vic in London, where she was playing Stella in A STREETCAR NAMED DESIRE with Gillian Anderson and Ben Foster. She won the WhatsOnStage Award for her supporting role, which is judged by the public.

Vanessa has just completed the season of Polly Stenham’s JULIE, an adaption of August Strindberg’ MISS JULIE at the National Theatre, in which she played the title role. Paul Taylor in his Independent review wrote, “Vanessa Kirby shines.”

She signed this sketch for me a few weeks ago at the stage door. 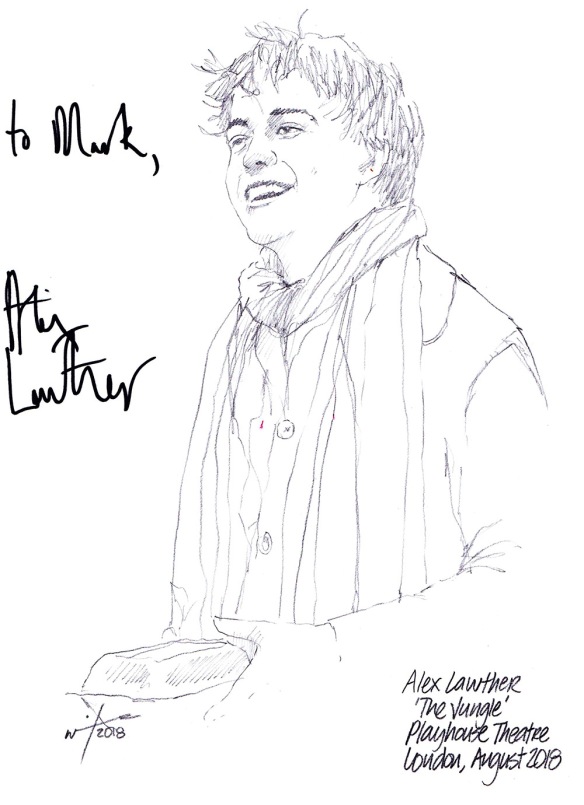 “The most important play in the West End.” That’s the five-star verdict of critic Dominic Cavendish in his review of THE JUNGLE. “Astonishing. The West End just got a heart transplant,” he said in the Telegraph.

Originally commissioned by the National Theatre, THE JUNGLE is a series of vivid snapshots of life, loss, fear, community and hope in the sprawling refugee camp that existed for a year near Calais on the French northern coastline, known as ‘The Jungle’.

Written by Joe Murphy and Joe Robertson, who had first-hand experience of the camp, running a pop-up theatre called ‘Good Chance’ and co-directed by Stephen Daldry and Justin Martin, the production transferred from a sold-out run at the Young Vic last year, across the river to The Playhouse Theatre.

Veteran Guardian critic Michael Billington also gave the production five stars, calling it a “priceless piece of theatre… that moved to the West End with all its vital organs in tact.”

The immersive show has transformed the traditional venue. Audiences can either sit amongst the bustling Afghan Cafe in the stalls or watch from the ‘Cliffs of Dover’ seating in the dress circle. Regarded as one of Britain’s rising stars, twenty-three year old Alex Lawther plays Sam, a ‘brattish, but terrifyingly efficient’ Etonian posh boy. He describes the Jungle as “Glastonbury, without the toilets.”

Alex will be familiar to viewers of the Netflix series THE END OF THE F***ING WORLD and was the young Alan Thuring in 2014 Oscar-nominated film THE IMITATION GAME. I caught up with him to sign this sketch on his last day with the London production, arriving for Saturday’s matinee before he starts a new project. He will rejoin the cast when it transfers to New York later in the year.

Throughout the summer of 2014, the superb BAFTA-winning and double Olivier nominated actress Helen McCrory played the title role in the National Theatre’s production of Euripides’s MEDEA on the Olivier stage.

It’s one of the most terrifying characters in Ancient Greek tragedy – a sorceress who kills her own children – and it requires, if you will forgive me, a killer performance’, one which Telegraph critic Charles Spencer called Helen’s “performance of her career.”

Helen of course is no stranger to playing screen villains, her most notable being Narcissa Malloy in the final three HARRY POTTER films. For her role as MEDEA she won the Critics Circle Theatre award for Best Actress.

I left this drawing at the National for Helen to sign which she did and returned it to me with a note saying ‘what beautiful sketches.’ 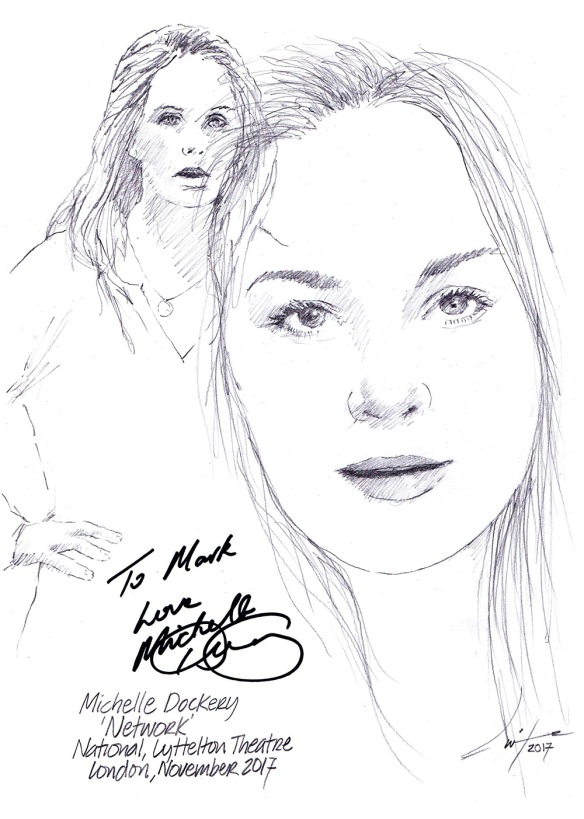 Michelle Dockery returned to the National Theatre late last year to play the role of the ambitious TV producer Diana Christensen in the stage adaption of Paddy Chayefsky’s blistering satire NETWORK, which completed its repertory run last Saturday. After making her professional stage debut in 2004, Michelle earned an Olivier nomination five in 2009 for her supporting role as Maroussia in the National’s production of BURNT BY THE SUN. On the small screen her five year portrayal of Lady Mary Crawley in the popular TV period drama DOWNTON ABBEY, earned her a Golden Globe and Emmy Nominations. She kindly came to the stage door between shows on Saturday to sign and pose for photos and I managed to get my drawing graphed and dedicated.

OSLO tells the story of two maverick Norwegian diplomats who coordinated top secret talks that inspired seemingly impossible friendships leading to the groundbreaking Oslo Peace accords in 1993 between the Palestine Liberation Organisation and the State of Israel. JT Rogers play opened last year at the Lincoln Centre in New York, winning the Tony Award. The London production opened at the National Theatre for a brief and sold out run before transferring to the Harold Pinter Theatre in the West End. Toby Stephens plays Terje Rod-Larsen and Lydia Leonard, his wife Mona Juul, the Norwegian diplomats who orchestrated the Peace accord between Yitzhak Rabin and the PLO’s Yasser Arafat. Both Toby and Lydia signed my sketch a couple of weeks ago at the Pinter stage door.

Bryan Cranston made his London stage debut as Howard Beale, the mad prophet of the airways to rave reviews in NETWORK on the Lyttelton boards at the National Theatre this month.

Based on Paddy Chayefsky’s brilliant script for the Oscar winning 1976 film, Bryan plays the aging news anchor who threatens to kill himself on live TV, becoming an instant crazed celebrity guru yelling the iconic slogan, “I’m as mad as hell and I’m not going to take it anymore.”

Bryan won a Tony for his portrayal of Lyndon B. Johnson in ALL THE WAY on Broadway and is the winner of six Emmys and 2 Golden Globe Awards for his celebrated role as Walter White, the chemistry-teacher-turned-drug-lord in the hit television show BREAKING BAD. He also earned BAFTA and Oscar nominations for TRUMBO in 2015.