Imran Khan is Pakistan’s most successful captain, in a career that spanned almost twenty years from 1971-1992. In 88 Test matches he scored 3807 runs, including six centuries, taking 382 wickets.

He is one of only eight players to achieve the all-rounders Test triple – 3000 runs and 300 wickets . He did so in 75 matches, second fastest behind Sir Ian Botham (72).

He retired twice. First after the 1987 World Cup, but due to popular demand he was requested by President Zia ul Haq to return to Captain the team again. At 39, he lead Pakistan to World Cup glory, winning the 1992 Championship, beating England at the Melbourne Cricket Ground in the final, then retired again.

An alma mater of Oxford University, Khan entered politics and was a member of the National Assembly (2002-2007). He is also known for his philanthropy, building cancer hospitals and research centres.

In 1996 he faced libel action taken against him by Sir Ian Botham, surrounding ball tampering and associated derogatory comments.

Sir Ian ‘Beefy’ Botham was a genuine all-rounder – a big hitting batsman with a classical straight bat style and a medium paced swing bowler. A controversial figure both on and off the field, Beefy was involved in a number of well-publicised incidents, including a suspension from the National team for smoking cannabis. He also captained England in 12 Tests. His right arm medium bowling resulted in 383 wickets in 102 Tests, accumulating 5,200 runs. He has taken five wickets and scored a century in an innings of a same Test match on five occasions. He still holds the record for the highest number of wickets taken by an English bowler.

A prodigious fund-raiser, he is renowned for his Charity Walks and has raised over £12 million for Leukaemia Research. Sir Ian became Sir Ian in 2007, knighted for services to cricket and cancer charity work.

Imran signed my caricature during Pakistan’s 1988/89 tour of New Zealand. Sir Beefy graphed his in Wellington, when England played New Zealand in the 1992 World Cup at the Basin Reserve. 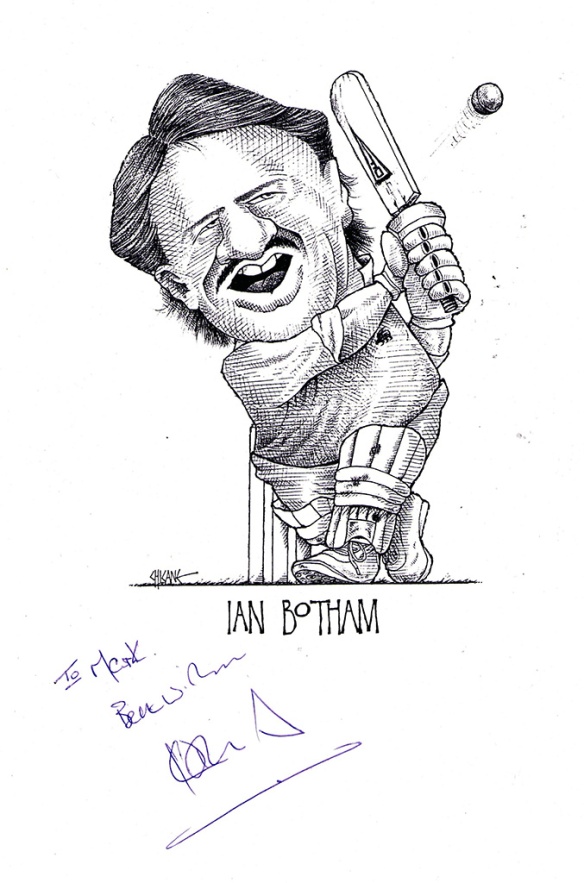 2 thoughts on “Drawing: All Round Good Guys Part 2 – Khan and Botham”