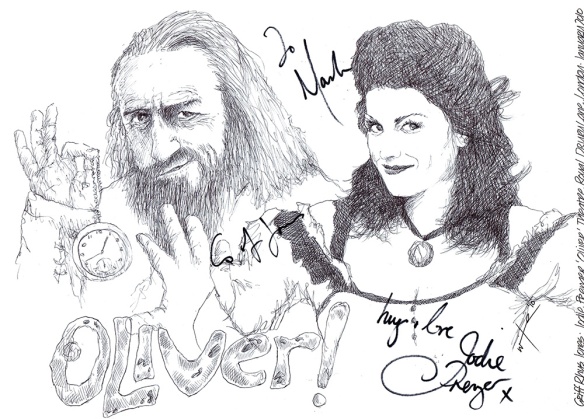 Griff took over the role of Charles Dicken’s conniving career criminal Fagin pickin’ a pocket or two with his gang of homeless boys. He replaced Omid Djalili becoming the fourth person to portray the loveable rogue in December for six month stint.

Jodie won the BBC TV’s I’d Do Anything to find Nancy for the West End revival in 2008 – a role she played from the opening night in January 2009 until March 2010 plus a two show one off performance on 13 November 2010 filling in for Kerry Ellis.

Griff also returned to Oliver! in December 2010 for a five week start until final curtain in January the following year. I left this black biro sketch at the theatre where both Griff and Jodie signed it for me.