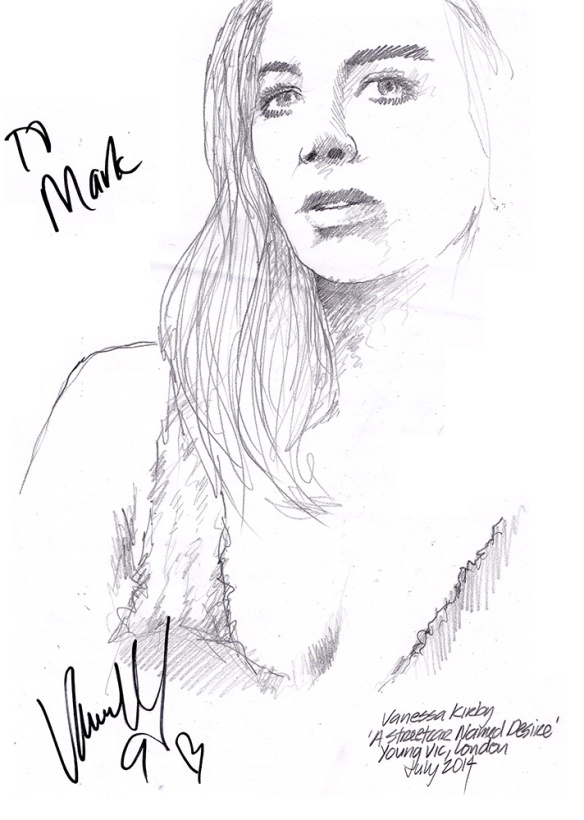 I sketched 26 year old English actress Vanessa Noola Kirby – or ‘Noo’ as she is known (“no one ever calls me Vanessa,” she says)  in her role as the endearing Stella opposite Gillian Anderson‘s Blanche Dubois in Tennessee Williams’ timeless masterpiece A Streetcar Named Desire at London’s Old Vic during the late summer.

I didn’t manage to have the drawing signed at the theatre in person, so sent it to her. She autographed and returned it quicker than I’ve ever known… a matter of hours, and Royal Mail redeemed its reputation. Quick sums up Noo. Her short but stellar career has quickly launched her on the right trajectory. It was another ‘Stella’ part that introduced her to the masses, enchanting TV audiences as Estella also opposite Gillian in the BBC’s Great Expectations in 2011.

Noo now has five films coming out in almost as many months, playing characters with different names this time. She has also been nominated for a WhatsOnStage Award, which the public vote on.

3 thoughts on “Drawing: Vanessa Kirby in A Streetcar Named Desire”