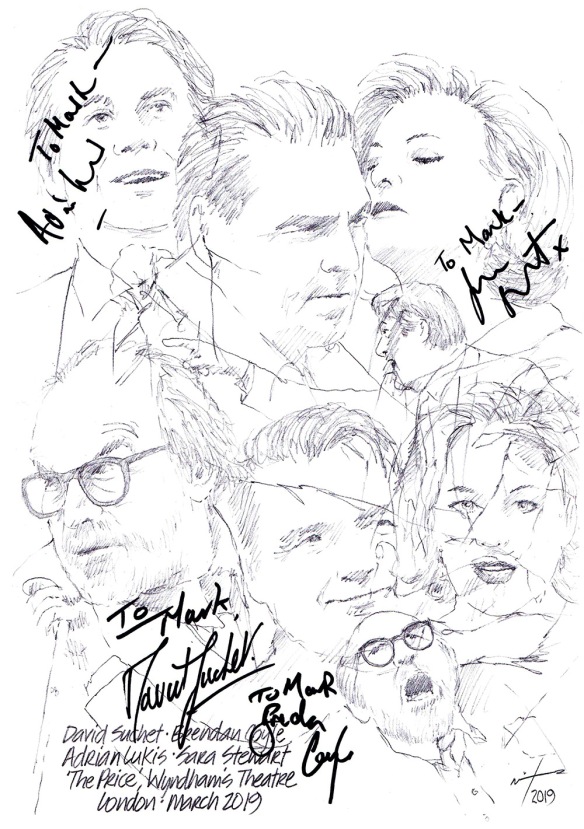 Arthur Miller’s final masterpiece, THE PRICE premiered on Broadway at the Morosco Theatre in the winter of 1968. The play about family dynamics, the price of furniture and the price of one’s decisions has had a number of revivals, including Jonathan Church’s ‘rich and powerful’ 50th anniversary production at the Theatre Royal Bath last summer, which transferred to the Wyndham’s Theatre in London’s West End this February with the same cast.

Two estranged brothers meet for the first time in sixteen years to sell the family furniture stored in a New York attic. Victor Franz (Brendan Coyle), a New York cop, nearing retirement and his brother Walter (Adrian Lukis), a successful surgeon learn the cost of dividing the family spoils. They are joined by Victor’s alcohol-dependent wife Esther (Sara Stewart) and a silver-tongued 89 year-old furniture dealer, Gregory Solomon (David Suchet) who is asked to access and bid for the family heirlooms. The Guardian’s Michael Billington summed up the critical response by simply saying it is a “superbly acted production.”

Special mention has been made of David’s tragicomic tour de force, with Dominic Maxwell writing in his review for the Times, that the show is “blessed by one truly great star turn. David Suchet has an almost indecent amount of fun as Gregory Solomon”.  Both David and Adrian have been nominated for Best Actor and Best Supporting Actor Olivier Awards respectively, at this weekend’s ceremony.

Adrian and Sara signed my montage sketch for me in person at the stage door prior to Saturday’s matinee a couple of weeks ago, but I missed David and Brendan, so left it for them at the theatre. It was returned TTM (Through The Mail) as we say in the collecting business, graphed and dedicated. 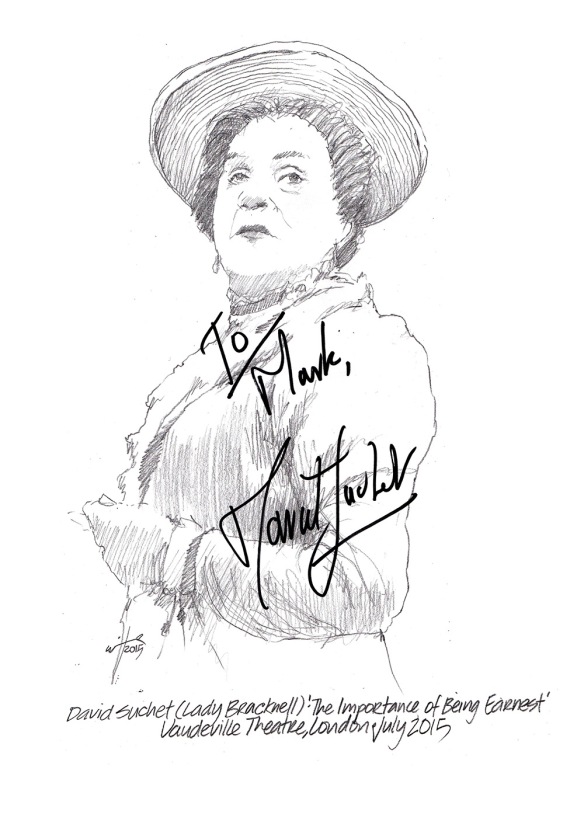 One of Britain’s most revered actors plays one of theatre’s most iconic roles with David Suchet starring as Lady bracknell in Oscar Wild’s timeless and popular comedy of errors THE IMPORTANCE OF BEING EARNEST.

After a short UK tour the production, directed by Adrian Noble settled in to the Vaudeville Theatre in London’s West End late last month for a five-month residency.

While known for his TV roles, especially as Agatha Christie’s fastidious detective Hercule Poirot, he is no stranger to treading the boards and has been nominated for no less than seven prestigious Olivier Awards and a Tony for his Broadway portrayal of Salieri in AMADEUS.

The man most famed for his pencil moustache and distinctly male attire is now decked out as a very Victorian lady. The formidable, biting character of Lady Augusta Bracknell represents Wilde’s opinion on Victorian upper-class negativity-conservative, repressive, powerful and arrogant. Famous ‘Lady Bracknells’ have included Dame Judi Dench and Penelope Keith, but in the past few years the role has also been played by men. Geoffrey Rush in Australia and Brian Bedford in Stratford, Ontario and Broadway. “I’m trying to become the best woman I can”, said David in a recent interview, although “the character almost defies gender really”.

The Guardian critic Michael Billington called David’s performance “majestically funny” and said “As Lady Bracknell, Suchet does not so much enter a room as occupy it totally”.

There’s a large poster of David as Lady B outside the Vaudeville’s stage door, where many gather after each show. I joined them after last Saturday’s evening performance. It’s on a busy thoroughfare with lots of traffic-vechicles and pedestrians. Many passing by would comment on the poster, ‘oh there’s what’s his face…Poirot!” He’s still recognisable even in a drag. David is the nicest man (and woman) you could ever wish to meet. He doesn’t come to the stage door, but remains in the foyer area and you are invited in to meet him, take selfies, get sigs and have a brief chat. He loved this sketch and as usual was more than happy to sign it. 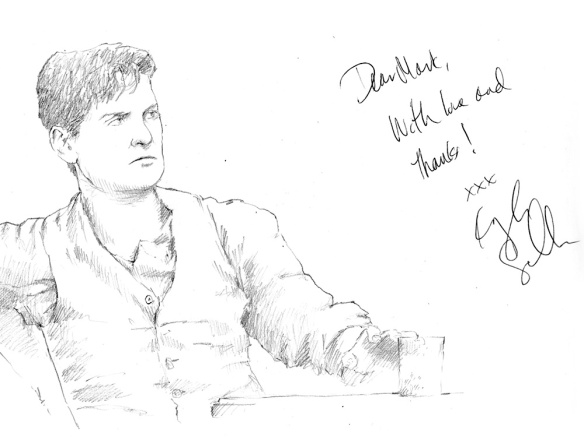 Kyle Soller is an American actor, living in London having graduated from RADA in 2008. His breakthrough year was in 2011 when he won the Evening Standard Theatre Award for Best Newcomer for stellar performances in The Glass Menagerie and The Government Inspector, both at the Young Vic and The Faith Machine at the Royal Court.

In 2012 he performed the role of Edmund in Eugene O’Neill’s harrowing autobiographical play A Long Day’s Journey Into Night at the Apollo Theatre with David Suchet and Laurie Metcalf. The sketch is based on that character and he signed it for me at the theatre. Kyle is currently appearing in Marlowe’s Edward II at the National. 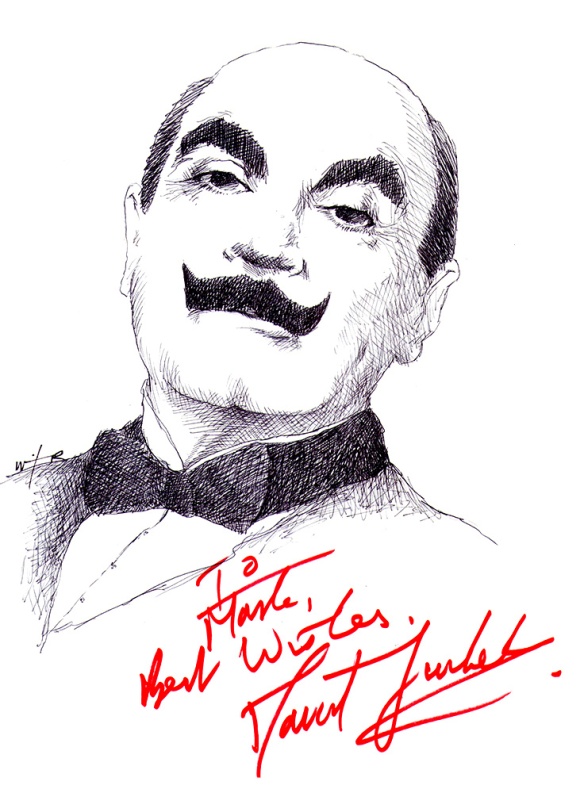 David Suchet is best known for his portrayal of Agatha Christie’s most famous detective Hercule Poirot. He has played the eponymous Belgian sleuth since 1989, so you would think some of his characteristics my have rubbed off – impatience, opinionated and direct… but no, he’s quite the opposite, one of the nicest people you could ever wish to meet.

He signed a black biro sketch of Poirot after a performance of All My Sons with Zoe Wanamaker at the Apollo Theatre stage door foyer in June 2010. One thing that they do obviously both have in common is doing things in an orderly manner. Placing my sketch neatly on the table he produced a complete set of Sharpie pens. A pack of 20 with every colour available. He selected the red, looked at the drawing then signed and dedicated it to me.