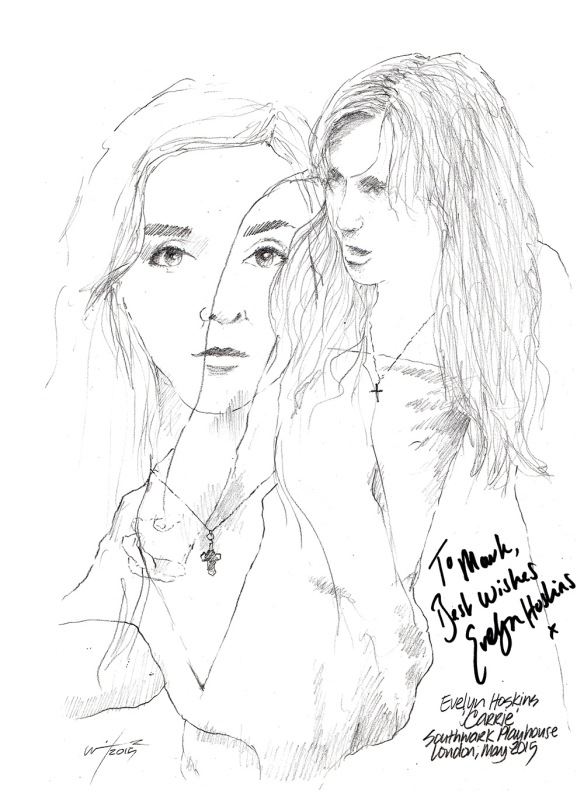 Evelyn Hoskins took on the title role in the musical revival of Carrie, the role made famous by Sissy Spacek in the 1976 high school horror film at London’s Southwark Playhouse last month.

The Guardian’s Lyn Gardner wrote, “A mesmerising performance by Evelyn Hoskins as  the flame haired teenage avenger fires this revival of the RSC’s slaughterhouse Cinderella”

The show has a notorious history. Eager to repeat the success of Les Miserables, the Royal Shakespeare Company produced a stage adaption of Stephen King’s novel and the iconic movie version by Brian De Palma. It opened in Stratford and then transferred to Broadway, failing in both.

This was the first London revival, returned, reworked, revised, rewritten and “reborn in style” wrote Rebecca Hawks in The Telegraph. The story’s simple – a high school misfit with an abusive and religious mother, uses telekinesis to punish her tormentors.

Director and choreographer Gary Lloyd said “Southwark developed a song reputation for making things work that didn’t originally.” And by all accounts he got it right, with enthusiastic support from critics and theatre goers alike. “The result is bloody marvellous in every sense” wrote Mark Shenton in London Theatre.

Not only did Evelyn suffer bullying and harassment by her school peers, and being drenched in stage blood nightly – twice on matinee days – she was subjected to signing my sketch. What some actors have to do for their art… and mine!

2 thoughts on “Drawing: Evelyn Hoskins in Carrie the Musical”