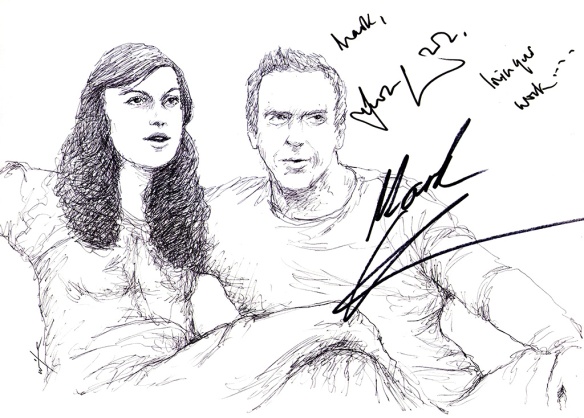 Keira Knightley’s West End debut in a modernised version of Moliere’s The Misanthrope sparked a box office frenzy at the Comedy Theatre in late 2009.

Damian Lewis wasn’t exactly an unknown either, after his appearance in Spielberg’s TV series Band of Brothers. The cast also included Tara Fitzgerald and Dominic Rowan. But the hoopla surrounding the nightly appearance of Keira was something else…

Barriers were erected either side of the stage door and patrolled by a number of suited security men who managed the post-show pantomime. Populace on one side, paparazzi on the other. Some nights there were equal numbers. They included a mixture of autograph collectors, dealers, sycophants, rubber neckers, voyeurs and genuine audience members.

One night, a perceived threat to Ms Knightley prompted the Met to send half of its Central London muster to Keira’s aid. A poor Polish bloke (or maybe Hungarian) holding a poster was pinned up against the theatre wall, while the police searched and questioned him. Well, 3 of them did, the rest of the constabulary stood around waiting for the star to show.

The news even reached New Zealand, where one of my friends; familiar with my stalking activities; enquired if it was me!

The Knightley exit was always prefaced by her bodyguards: come out first, survey the scene and give the all clear. Keira would pop out, pop down the line, sign, stop for the pap pics and pop into the waiting black car and speed off. All within 20 seconds. 30 on a slow night.

To her credit Keira did sign, scrawl, scribble, scratch. It became known as the ‘Keira K’. Another day, another K. K if you were lucky. Often the downstroke of a K. Depending on where you were in the line, you could get a vertical or horizontal scrawl across 3 items. A ‘KK’ was ok, but a name and dedication would be a miracle.

On the particular early January evening I went for my sketch to be signed, the snow had stopped.

Damian left first, his usual friendly self. He really liked the sketch and was happy to sign and dedicate. He acknowledged his small band of admirers and strolled off into the night. Keira’s bodyguard appeared, so everyone braced themselves and MS Knightley popped out, all smiles. For some reason she came over to me first, saw the sketch and said “Oh, Wow!”. She signed it and I asked if she could inscribe ‘To Mark’ (in for a penny). She did, completed the rest of the autographs, usual pose for the paps and into the car and off.

4 thoughts on “Sketch: Keira Knightley and Damian Lewis in The Misanthrope”