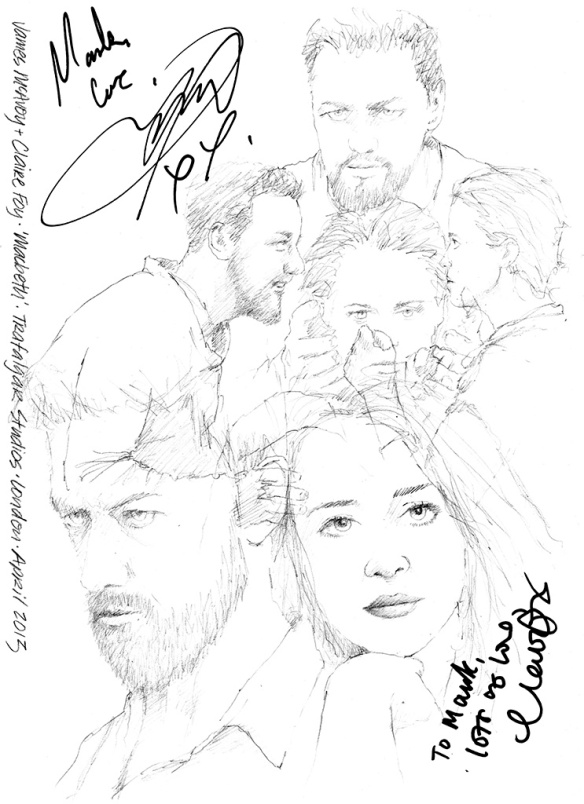 Glasgow-born James McAvoy has just completed the lead role in a sell out season of ‘the Scottish play’, with English actress Claire Foy as Lady Macbeth.

After an eighty day run as London’s Trafalgar Studios, James goes straight into filming the next instalment of X Men alongside the two Knights, Patrick Stewart and Ian McKellen, who have both also starred as the murdering Scot. James commented that it would be fun having three Macbeths in the one place “We might have a Macbeth-off – my Macbeth’s better than your Macbeth!”

The production received rave reviews, but the interaction with the audience didn’t always go to script. He suddenly stopped mid-scene when someone in the front was filming with his mobile phone. He refused to continue with the play until the device was firmly put away. James also stopped in the middle of the climatic sword fight to help an audience member who had collapsed. He called for help, cracked a joke or two, then continued the scene with the same intensity, according to one witness who tweeted the event. On another occasion, he told two drunk women who kept talking through the early scenes to “shut up”. They eventually complied and later fell asleep.

When he signed my sketch, going in for the Friday evening’s performance, he was telling the gathered ‘graphers that he had injured an eye and his hand due to the intense physicality of the play. Luckily it was his left hand, so he could still sign!

3 thoughts on “Drawing: James McAvoy and Claire Foy in Macbeth”