Considered one of the all time greats of snooker, some say the greatest, Scotsman Stephen Hendry announced last year that he is returning to the sport after retiring in 2012, accepting a two-year invitational card to play in the main World Snooker Tour, after an impressive semi-final run at the World Senior Championships in August.

In terms of world titles in the modern era, Stephen leads with seven, winning his first in 1990 at the age of 21, the youngest to achieve the feat and a record he still holds. He is followed by Ray Reardon, Steve Davis and Ronnie O’Sullivan on six each.

His dominance during the 1990’s was the reason why he was nicknamed the ‘King of the Crucible’, the iconic Sheffield venue that has hosted the World Championships since 1977. Winning the tournament again, successively from 1992-1996 and again in 1999, along with six Masters (five successively) and five UK Championships have cemented his place at the very top of the sport. He is only one of three players to have won all three Triple Crown events- the World, Masters and UK titles, in a single season and the only one to have completed it twice (1989/90 and 1995/96). His 18 Triple Crown tournament victories is only surpassed by the current World Champion Ronnie O’Sullivan.

In recent years Stephen has been a regular member of the snooker commentary team’s TV coverage of the major events, including the UK Championship late last year, behind closed doors at the Covid-secure Marshall Arena in Milton Keynes, where I sent him this quick sketch and was very happy it eventually came back signed and dedicated. Snooker fans are looking forward to watching him back at the baize this year, ‘probably’ starting with the Welsh Open next month.

Australian professional snooker star Neil Robertson is regarded as the sport’s most successful player outside the United Kingdom. The 38 year-old left-hander, who began playing at the age of 14, turning professional three years later in 1998, is known as a prolific break-maker with more than 700 century breaks and has made the maximum 147 on four occasions. In 2013/14 Neil was the first player to make a 100 centuries in a single season.

He has won 18 Ranking titles and has been runner-up 12 times, which places him joint sixth on the all-time list alongside Judd Trump and Mark Shelby. In 2010 he won the World Championship, beating Scotsman Graeme Dott 18-13 in the final. He became World No 1 later that year and subsequently again in 2013 and 2014. He is one of only thirteen players to win the World, UK and Masters titles, claiming two UK crowns in 2013 and 2015 and the Masters in 2012 where he was also was runner-up in 2013 and 2015. He has also won the Champion of Champions tournament in 2015 and again in November last year.

I posted my sketch to Neil when he competed in this year’s World Championship at the Crucible Theatre in Sheffield in August, where he kindly signed and returned it to me. 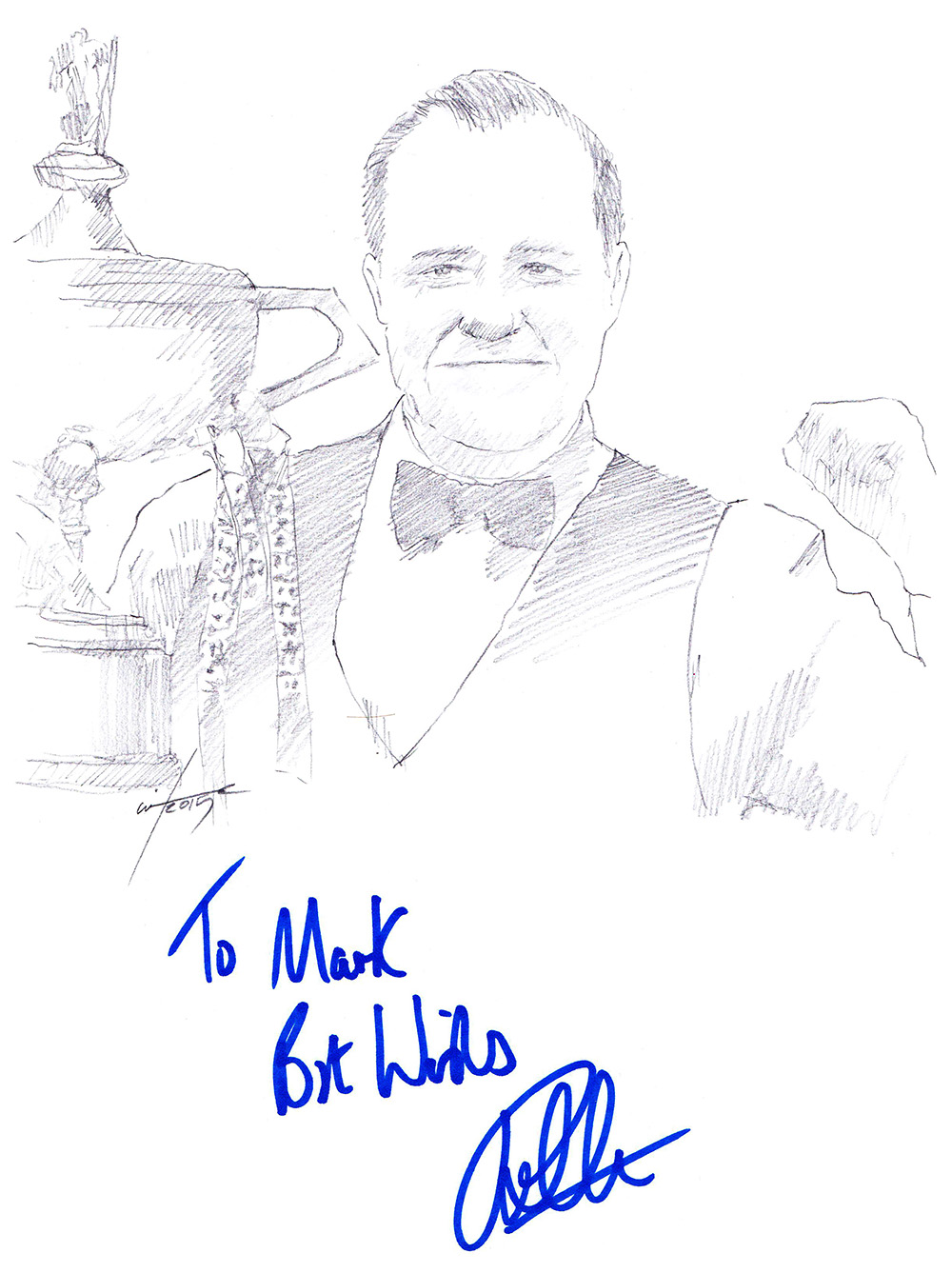 Considered one of the greatest, certainly the most breathtaking final at the famous Crucible theatre in Sheffield, this years ultimate match of the World Snooker Championship saw the twenty-nine year old Judd Trump finally win his maiden title with an emphatic 18-9 victory over four-time champion John Higgins last night. Having been touted as a potential champion for many years the Englishman finally fulfilled his potential.

“The standard was astonishing,” said six-time winner and BBC commentator Steve Davis. “It may have been the greatest final we have ever seen and Judd Trump was at the heart of it. He dismantled one of the greatest players to have ever held a cue.”

With a record 11 century breaks – seven to Judd – and frame-winning breaks of 50 in 23 of the 27 played, it was a remarkable example of potting from both players, taking the standard of snooker to another level. For the forty-three year old Scot, it was his third defeat in a row, having reached the final in the last three years, and his fourth in eight appearances, but all agree, he played his part in this classic contest. “I was lucky to get nine frames,” John modestly said after the encounter.

Judd now joins John and nine other players in achieving the career ‘Triple Crown’, winners of the sport’s three most prestigious tournaments-the World Championship. The UK Championship and the Masters.

Both Judd and John signed sketches for me at the Crucible in 2015, which I’ve previously posted, but to pay tribute to such a classic sporting moment, here they are again.

Chinese snooker star Ding Junhui became the first Asian player to reach the final of the World Snooker Championships at the Crucible Theatre in Sheffield last week. The former world number 1 had slipped outside the world’s top 16 and had to qualify for the tournament’s main drew. He won his three matches, conceding only seven frames and then went on to win all his matches to play Mark Selby,  losing 18-14 in a thrilling finale. Ding became the first qualifier to reach the final since Judd Trump in 2011. Nicknamed ‘Enter the Dragon’ the final attracted an television audience of over 42 million in his home country. The most successful Asian professional snooker player in the history of the sport has scored over 400 century breaks, securing the maximum 147 on six occasions. When beating Alan McManus in the semi-final,  Ding set a new record for the highest number of century breaks made by a single player at the Crucible.

I sent this drawing to Ding at the Crucible and he kindly signed it for me.

‘Mr Haircut’, ‘The Ace in the Pack’ and ‘Juddernaut’ are a few of snooker champion Judd Trump’s nicknames. The former Word Number 1 is also known for his flamboyant style played at a ferocious pace. He has compiled 375 century breaks during his professional career so far. In 2011, after finishing runner-up at the World Championsips, Judd went on to win the UK Championship. The following year he lost to Ronnie ‘The Rocket’ O’Sullivan in both the final of the Champion of Champions and the U.K. Championships, but beat him in the inaugural International Championship to become World Number 1, a position he has held twice.

Judd is a lefty, so to my horror I thought I had drawn him using his cue incorrectly. I looked a zillion photos and based this sketch on one that had him using the cue on the rest with his right hand. According to commentators, his natural game is left-handed but for some shots, particularly when using the rest he is right-handed. Apparently a number of snooker plays alternate depending on the difficulty of the shot. A new nickname comes to mind, ‘The Ambidextrous Ace’.

I’m not sure which hand he used to graph my sketch, but he did it at last year’s World Championships at The Crucible in Sheffield and returned it to me.

Scottish snooker player John Higgins is one of the most successful players in the modern history of the sport. His four world titles rank him fifth behind Stephen Hendry, (7), Steve Davis (6), Ray Reardon (6) and Ronnie O’Sullivan (5).

Nicknamed ‘The Wizard of Wishaw’, John held the number one ranking on four separate occasions. With his superb tactical game and break-building class, many place him alongside Steve Davis as one of the best all round players of the modern era.

John signed my sketch at the famous Crucible Theatre in Sheffield during this year’s World Championships last month. 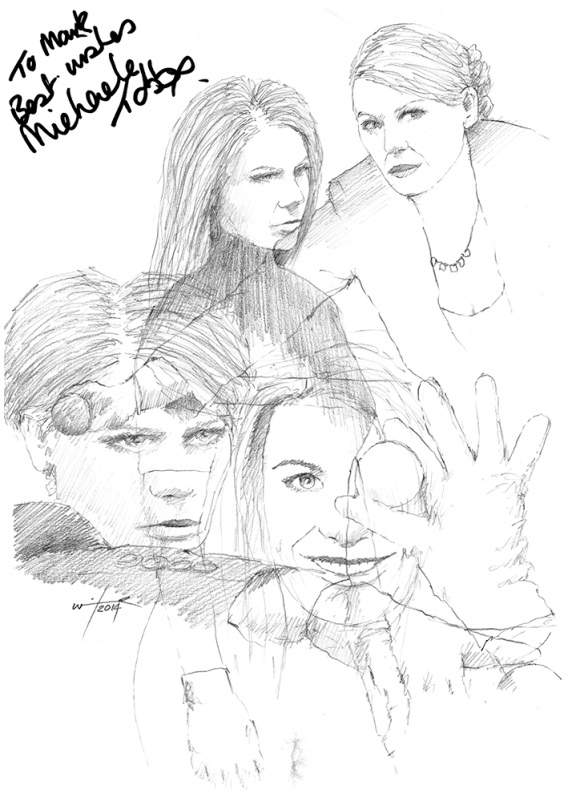 Michaela Tabb is snooker’s leading female referee, known as the ‘Queen of the Baize’. A former nine ball player and captain of the Scottish Ladies’ Pool team, she became the first woman to take charge at a professional ranking snooker tournament in 2002.

She made her World Snooker Championship debut at the Crucible Theatre in Sheffield in April 2003 and refereed the Final when John Higgins defeated Shaun Murphy in 2009. The previous year she refereed her first Masters final at Wembly Arena in London.

Michaela signed this sketch at the Crucible during this year’s World Championships.

Ronnie “the Rocket” O’Sullivan is considered a genius in the world of snooker and one of the most naturally talented players in the history of the sport. Many regard him as the greatest player ever. His rapid, attacking style and ability to play right or left handed has won him five World Championships, five Masters and four UK Championship titles, known as the Triple Crown events.

In his sixth World Championship final earlier this week, at The Crucible, Ronnie was beaten by 18 frames to 14 by Mark Selby in a thriller and what many commentators believe was one of the best ever. On his way home, Ronnie and his son Ronnie Jnr were involved in a car crash on the M1, but walked away unscathed. Ronnie kindly signed and returned this sketch from The Crucible last week.