The 2014 summer production of Tennessee Williams’ 1948 Pulitzer Prize winning drama A STREETCAR NAMED DESIRE at London’s Young Vic Theatre became the fastest-selling show in the venue’s history with the run extended due to demand.

Gillian Anderson gained critical acclaim for her performance as Blanche DuBois, winning the Evening Standard Theatre Award for Best Actress and her second Olivier award nomination. Directed by Benedict Andrews, the production also featured Ben Foster and Vanessa Kirby. The theatre collaborated for the first time with the National Theatre Live to broadcast the show live to over 1100 venues on 16 September 2014. It will also transfer to St. Ann’s Warehouse in New York next year.

I met Gillian at the Young Vic where she signed a sketch I did of her in the role of Nora from THE DOLL’S HOUSE, which collected her first Olivier nom. I left this sketch of the three  STREETCAR leads at the theatre, hoping they would sign it. Time passed and nothing returned, so I forgot about it. Vanessa signed an individual drawing for me. The dealers harassed Ben and tended to avoid graphing, so I didn’t bother him. Then, last week, this arrived in the mail, signed by Gillian. It’s one of the many surprises of this game. The longest time an item has taken to come back was three years, so don’t give up hope…or change your address.

I sketched 26 year old English actress Vanessa Noola Kirby – or ‘Noo’ as she is known (“no one ever calls me Vanessa,” she says)  in her role as the endearing Stella opposite Gillian Anderson‘s Blanche Dubois in Tennessee Williams’ timeless masterpiece A Streetcar Named Desire at London’s Old Vic during the late summer.

I didn’t manage to have the drawing signed at the theatre in person, so sent it to her. She autographed and returned it quicker than I’ve ever known… a matter of hours, and Royal Mail redeemed its reputation. Quick sums up Noo. Her short but stellar career has quickly launched her on the right trajectory. It was another ‘Stella’ part that introduced her to the masses, enchanting TV audiences as Estella also opposite Gillian in the BBC’s Great Expectations in 2011.

Noo now has five films coming out in almost as many months, playing characters with different names this time. She has also been nominated for a WhatsOnStage Award, which the public vote on. 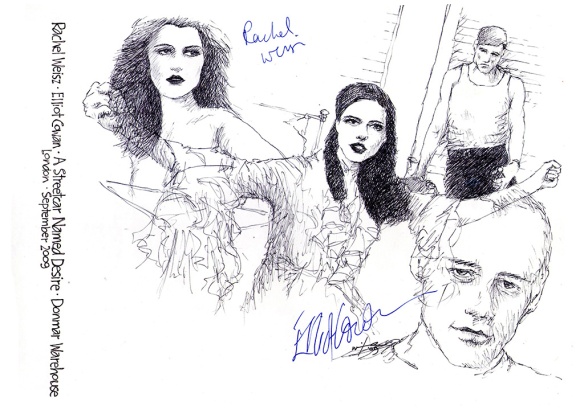 It featured Oscar winner Rachel Weisz as the drunken, pretentious Southern belle, Blanche DuBois; Ruth Wilson as her self-effacing sister, Stella Kowalski and Elliot Cowan as Stanley Kowalski, the primal, brutish husband. All three signed for me in September 2009.

The first West End staging starred Vivien Leigh and was directed by her husband Laurence Olivier in 1949. 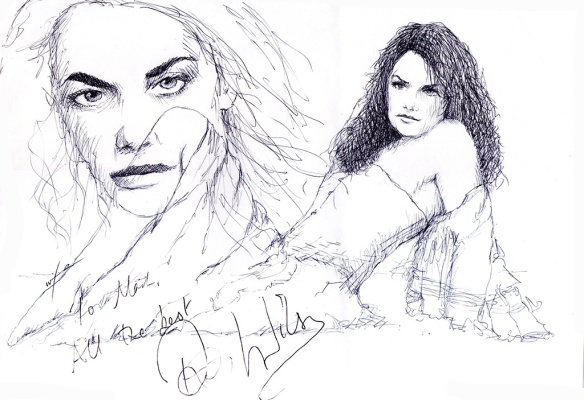