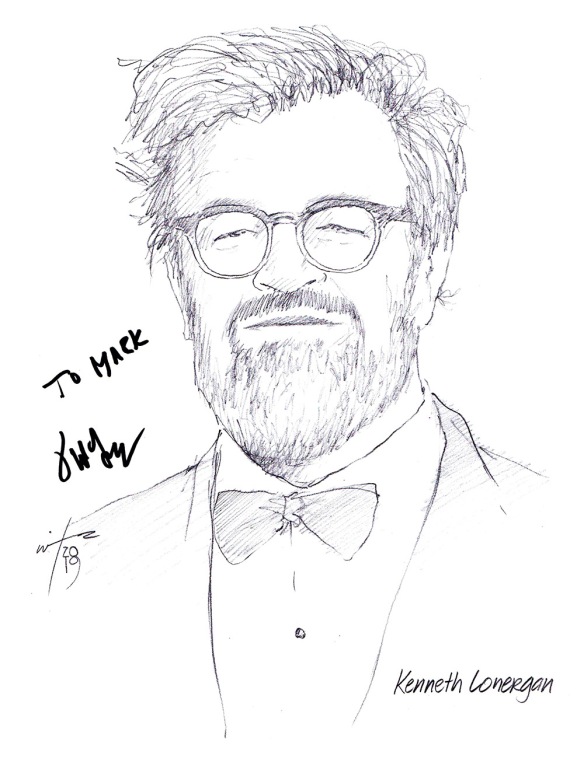 American film director, screenwriter and playwright Kenneth Lonergan was in London recently, visiting Wyndham’s theatre where his play THE STARRY MESSENGER opened last month with Matthew Broderick and Elizabeth McGovern. The original 2009 off-Broadway production also featured Matthew and Kenneth’s wife, J.Smith-Cameron.
Kenneth’s playwriting prowess came to prominence in 1996 with THIS IS OUR YOUTH, followed by THE WAVERLY GALLERY three years later, earning him a Pulitzer Prize nomination and LOBBY HERO in 2002. All three plays collected Tony Award nominations for their respective revivals.

Kenneth’s most notable film work is YOU CAN COUNT ON ME (2000) and MANCHESTER BY THE SEA (2016), both written and directed by him and both included Matthew in their cast. He received Academy Award Best Original Screenplay nominations the two films, collecting the Oscar for the later. He also won the BAFTA Award. David Fear, writing in Rolling Stone said that MANCHESTER proved Kenneth was “practically peerless in portraying loss as a living, breathing thing without resorting to the vocabulary of griefporn.” In 2002 he co-wrote Martin Scorsese’s GANGS OF NEW YORK (2002), once again receiving Academy recognition with an Original Screenplay nomination.

It was great to meet Kenneth at Wyndham’s Theatre, where he kindly signed my drawing.

“I like stories and I am always looking for the one which I imagine to be irresistible,” wrote British novelist and screenwriter Ian McEwan, considered one of the most powerful people in UK culture and listed by The Times in the 50 greatest British writers since 1945.

Winner of numerous accolades, including six nominations for the Man Booker Prize, Ian won the prestigious award in 1998 for his novel AMSTERDAM. The acclaimed screen adaption of his romantic war drama ATONEMENT collected Oscars, BAFTAs and a Golden Globe.

I had hoped to catch Ian in person at the premiere of his latest film adaption THE CHILDREN’S ACT at the Curzon Mayfair, but missed him, so sent this sketch to his agent and it came back signed and dedicated.