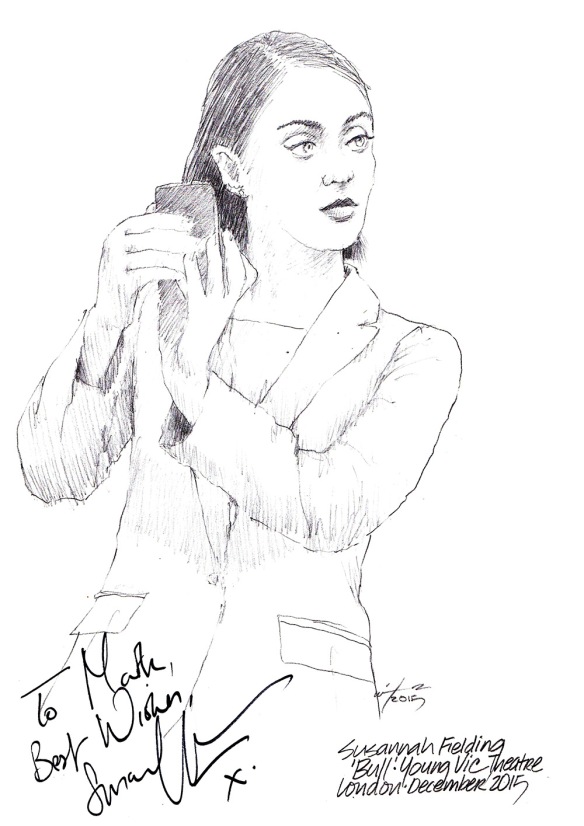 The “consistently brilliant” Susannah Fielding was joined by Nigel Lindsay, Max Bennett and Marc Wootton in Clare Lizzimore’s “stunningly nasty production” (TimeOut) of Mike Barlett’s BULL when it was restaged at London’s Young Vic’s intimate Maria space over the Christmas season. She played the icy, sleek alpha female Isobel, who uses her manipulative skills to survive corporate downsizing when three warring work colleagues fight for the two remaining positions in what critic Sophia Chetin-Leuner called “The performative splendour of being cruel.”

Winner of the 2014 Charleson Award for her memorable portrayal as Portia in Rupert Goold’s THE MERCHANT OF VENICE at the Almeida Theatre, Susannah’s star continued to shine. “The spoils go to Susannah Fielding, who gets to deliver the powerhouse speech that brings the play to its climax,” wrote Thomas Dearnley-Davison in Spindle Magazine.
Susannah signed this sketch of her in the role after surviving another session in the ‘bullring’ on the final Saturday.

Described but The Guardian as, “nasty and brutish,” the play is staged in the intimate Maria space, offering ringside seats (which are completely sold out!) as three employees – Isobel (Eleanor Matsuura), Tony (Adam James) and Thomas (Sam Troughton) fight to keep their jobs and avoid boss Carter’s (Neil Stuke) sword.

Isobel and Tony combine to make sure Thomas is the sacrifice as the playwright plots the destruction with, “the studied, elegant technique of a matador haunting a bull,” according to Laura Barrett in The Telegraph.

Originally staged in the Crucible’s studio space in Sheffield, it then enjoyed a run off Broadway before making its London debut, which has been extended until 14 February 2015.

The brilliant cast all signed my montage sketch after the mid week matinée this week.

Adam James reprises his role as the silkily offensive Tony in Mike Bartlett’s 55 minute four-hander Bull in the Maria space at the Young Vic Theatre. His character ruthlessly gangs up with Isobel (Eleanor Matsuura) on Thomas (Sam Troughton) to ensure Thomas is chosen by their older boss (Neil Stuke) for the chop, west in an unspecified office setting.

It was inspired when the playwright watched a bullfight in Mexico, one of the last surviving examples of ritual public slaughter. “To see something you really disapprove of, but it activates something primal and unsanitised,” he said. Mike won the 2013 National Theatre Award for Best New Play.

Cast members Adam, Eleanor and Sam originated their roles at Sheffield’s Crucible Theatre in 2013, transferring for a run off-Broadway in New York in April, before making the London premiere this year.

Bull continues at the Young Vic until 14 Feb.

Tokyo-born and London raised actress Eleanor Matsuura is currently appearing as the determined Isobel in Clare Lizzimore’s riveting production of Mike Bartlett’s razor-sharp Bull at the Young Vic in London.

The play looks at the fine line between office politics and playground bullying as three employees fight to keep their jobs in a corporate wrestling ring.

It’s nasty, it’s brutish, it’s short – a 55 minute exercise that provides catharsis for theatregoers who want to purge the day’s tensions by watching a metaphoric version of what may be happening during regular office hours.

I drew this montage of Eleanor including her role in Enron at the Noel Coward Theatre, which she signed for me after two rounds in the ‘ring’ (a matinee and evening performance) on Wednesday.