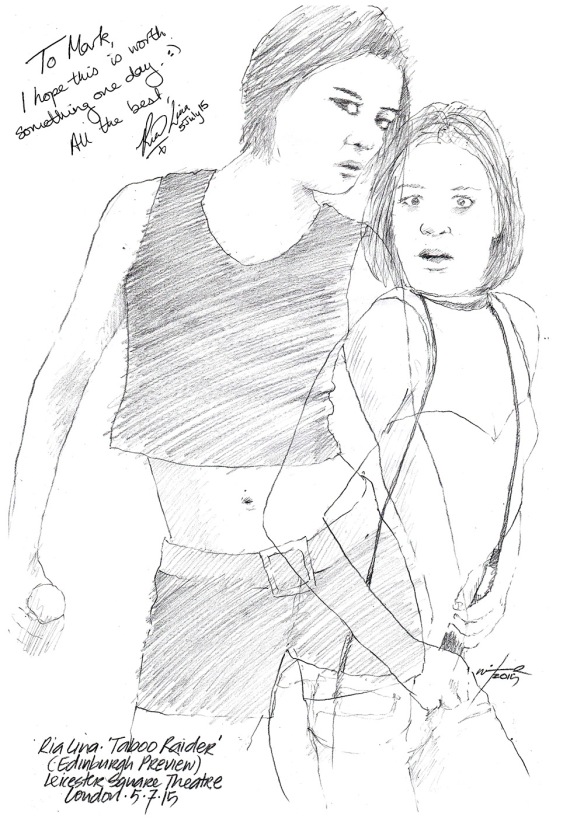 Comedian, musician, and writer Ria Lina previewed her new show Taboo Raider at the Museum of Comedy in the Leicester Square Theatre before taking it to this year’s Edinburgh Fringe Festival next month. A regular in stand up for the past 14 years both in the UK and internationally, The Guardian said, “I have no doubt she will hold her own so easily that she’ll have a hand free to hold someone else’s too.” Her shows combine stand up comedy and song.

At last years’s festival Ria’s show School of Riason received award nominations and plaudits alike and a commission for BBC Radio 4. A mother of three, Ria based the comedy routine on home schooling her children.

Taboo Raider looks at modern taboos – racism, sexism and discrimination – “not for the faint of humour” warned the show’s publicity material.

With a BSc in Experimental Pathology from St Andrews University, a Masters in Forensic Science and a PhD in Viral Bioinformatics from UCL… it owudld be fair to say Ria’s Creative juices are fuelled by potent cerebral content.

Did I think I’d be a stand up comic? No, I kinda fell into that but it’s been a surprisingly good fit” Ria said in a recent interview with The New Current.

When asked what she wants her audiences to take away from her shows she says “hopefully buy the CD”. Ria signed this sketch at the Leicester Square Theatre. You can vote for Ria’s Taboo Raider poster in the Edinburgh Comedy Poster Awards, or if you’re lucky enough to be in Edinburgh, catch the show.