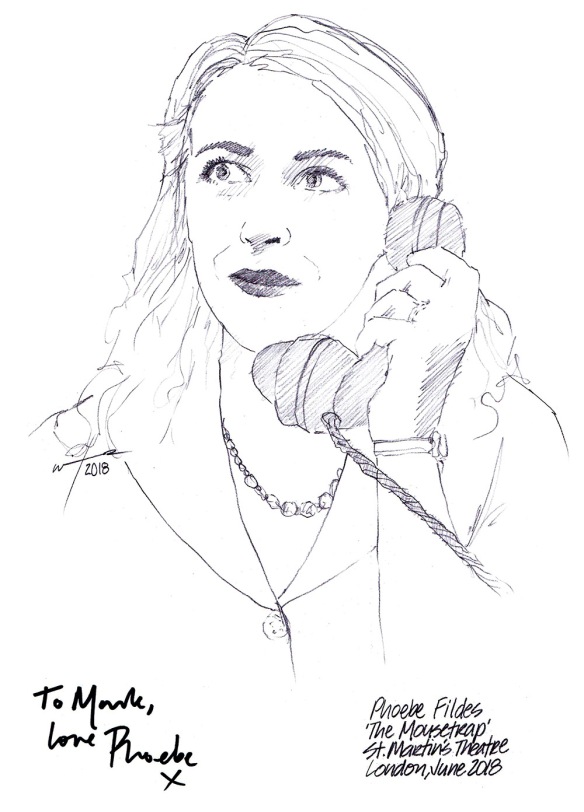 Agatha Christie’s legendary whodunit THE MOUSETRAP is the world’s longest-running play in modern times, since starting at the Ambassadors Theatre on the 25th November 1952. In 1974 it transferred next door to its current residency, the St Martin’s Theatre.

In that time many different casts have appeared. The original included Sir Richard Attenborough as Detective Sergeant Trotter and his wife, Sheila Sim as Mollie Ralston. The contemporary cast changes regularly and the current one began in April this year.

Over the past few years I have drawn a couple of characters after each changeover. Mollie, the proprietor of Monkswell Manor, where the action is set, is one I have concentrated on. When passing the theatre last month I noticed that Phoebe Fildes was playing Mollie. I had met her at the Vaudeville earlier this year when she was Lady Stutfield in Oscar Wilde’s A WOMAN OF NO IMPORTANCE and she signed my cast drawing.

Phoebe also played the Girl in the musical ONCE at the Phoenix Theatre and spent two years with the Shakespeare’s Globe’s world tour taking HAMLET to every country on earth with multiple roles, including Ophelia, Gertrude and Horatio. So I had to do a quick sketch of her as Mollie from the publicity stills in front of the theatre, which signed it for me.