In May last year the irresistible BAFTA Award-winning actress Miriam Margoyles returned to the London stage in the titular role of Jez Bond’s MADAME RUBINSTEIN at the Park Theatre. The play centres around the intense rivalry between 20th century cosmetic giants Helena Rubinstein and Elizabeth Arden (played by Frances Barber). Coincidently, it was also the subject of WAR PAINT, a simultaneous production on Broadway with Patti LuPone and Christine Ebersole.

I last saw Miriam as Nell in Samuel Beckett’s ENDGAME at the Duchess Theatre in 2009. Three years earlier she was one of the original cast members of the musical WICKED, as Madame Morrible at the Apollo and subsequently at the George Gershwin Theatre on Broadway. HARRY POTTER fans will know her as Professor Pomona Sprout. I’m a big fan of her THE REAL MARIGOLD HOTEL travel doco series… and told her so.

Her ‘comic tour de force’ in MADAME RUBINSTEIN was described by Alun Hood in his WhatsOnStage review. “Margoyles plays Rubinstein-so imperious that even her own children call her ‘Madame’-to the absolute hilt: she’s brash, amoral, manipulative, paranoid, rude, crazy: a bejewelled gorgon in a pillar box red dress. She is also, in Margoyles’ endlessly skilled hands, utterly irresistible.”

Miriam is a humanitarian advocate for many causes. I managed to catch-up with her when she arrived at the Royal Society of Medicine last Friday evening for The Silver Line’s fundraising event, which operates a 24 hour helpline for older people, where she signed my Madame R sketch.

THE TRIAL OF JANE FONDA is a one-act play inspired by a meeting between the Hollywood ‘wild-child’ of Henry Fonda and angry American war vets disgusted by her visit to Hanoi and photographed with North Vietnamese soldiers sixteen years earlier.

Written and directed  by seven-time Emmy Award-winner Terry Jastrow, the production debuted at the Edinburgh Fringe in August 2014, featuring his wife, the Oscar-nominated actress Anne Archer as ‘Hanoi Jane’. The meeting took place after irate Vietnam veterans, outraged by her anti-war protests, threatened to halt shooting of the her film STANLEY AND IRIS in Waterbury, Connecticut.

She agreed to meet 26 of them (in the play there’s a lot less) in the local St Michael’s Episcopal Church on 18 June 1988 to listen to them and explain her side of the argument and her outrage at a brutal foreign policy based on a flawed ‘domino effect’ theory about the spread of Communism.

Last seen in the London in her West End debut as Mrs Robinson in THE GRADUATE at the Gielgud in 2001, Anne Archer reprises her role as Jane Fonda, which is currently running at the Park Theatre directed by Joe Harmston until mid August. I left this portrait of Anne at the venue which she signed  and dedicated for me. 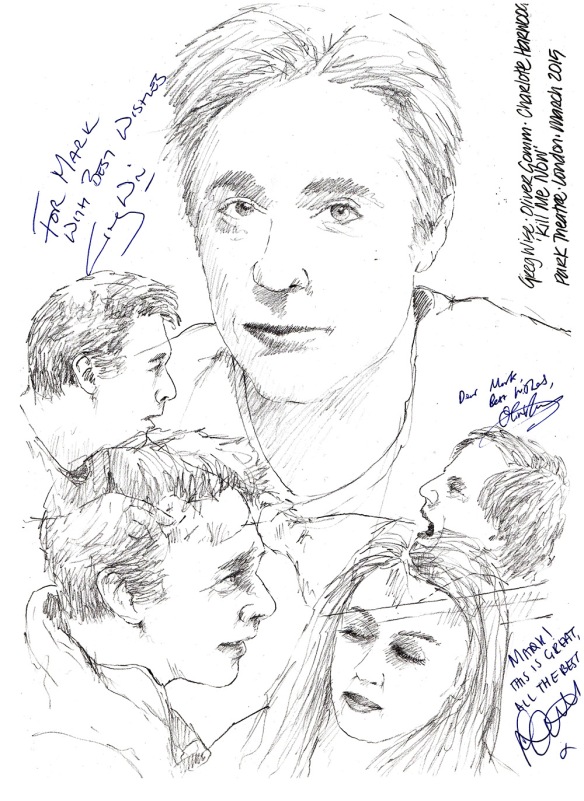 Greg Wise returned to the stage for the first time in 17 years in the UK premiere of Brad Fraser’s dark father-son story Kill Me Now, in the Park Theatre’s intimate Park 200 auditorium in Finsbury Park, London.

It’s advertised as a dark comedy, but it’s more like a tragedy about the intimate and unsentimental portrait of a family confronting disability, punctuated with glimpses of wit and humour.

Greg plays Jake, a widower who has abandoned a promising career as a writer to look after his disabled son, Joey. It’s a physically demanding role which he plays with, “noble sensitivity… his interactions with his son are often agonising,” said The Evening Standard’s Henry Hutchings in his four star review.

The comparatively unknown Oliver Gomm (Joey) is a revelation, with Hutchings comparing him to Daniel Day-Lewis in My Left Foot and recent Oscar winner Eddie Redmayne in The Theory of Everything. He described Charlotte Harwood’s performance as Jake’s tough, but vulnerable sister as “robust”.

I sent this sketch to Greg, Oliver and Charlotte who all kindly signed it for me. Kill Me Now finishes this Sunday, 29 March 2015.