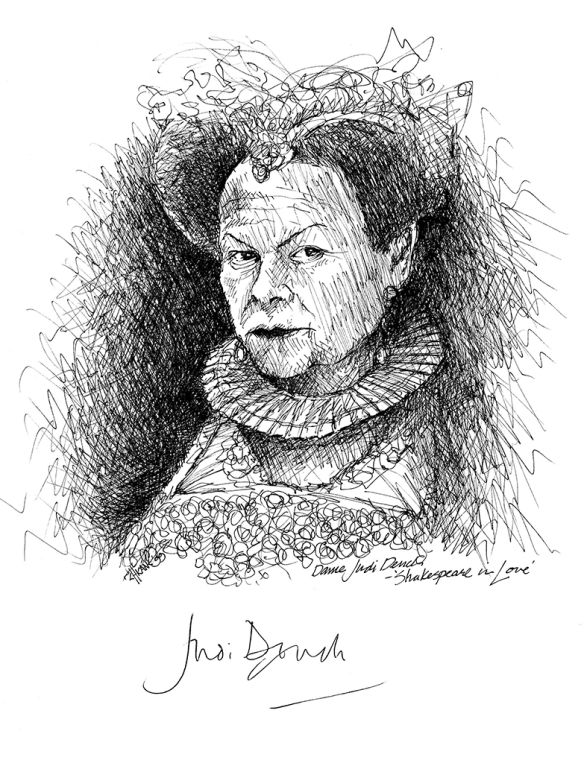 Dame Judi Dench is considered to be one of the greatest actresses of the post-war period, primarily through her work in theatre, including several of Shakespeare’s plays.

However, it was a Shakespearean role in a film about the Bard that won her film’s most coveted award – the Oscar (she also won the BAFTA). Playing Elizabeth I in Shakespeare in Love (1999) for only a few minutes earned her the Best Supporting Actress statue. In her acceptance speech she said “I feel for eight minutes on the screen, I should only get a little bit of him.” Her understated take on the monarch does set much of the film’s plot in motion.

Dame Judi signed my sketch through the post and sent me a nice complimentary letter. 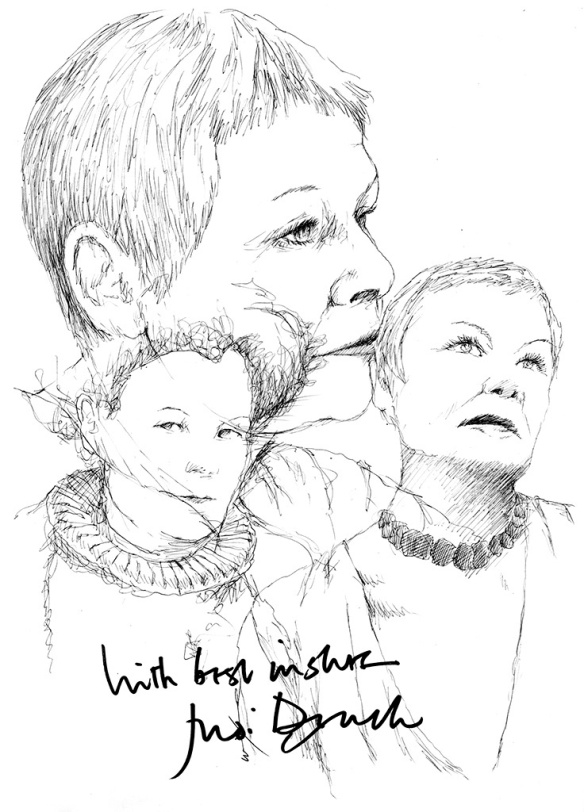 Dame Judi Dench – one of the greatest stage and screen actresses of all time, is also one of the best signers. Her most recent stage performance was as Alice in Peter and Alice at the Noël Coward Theatre in London. There was huge demand for her ‘graph and she always obliged – a real trouper!

I did this quick ‘portrait study’ in March 2010 and dropped it into the Rose Theatre in Surrey, where she was playing Titania as Queen Elizabeth I in A Midsummer Night’s Dream – almost 50 years after she first played the role for the Royal Shakespeare Company. 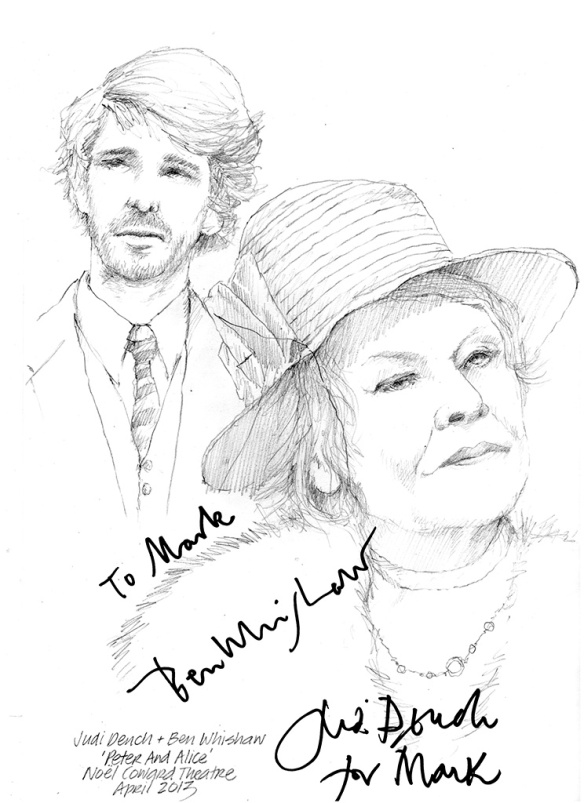 The Michael Grandage Company’s second of five theatrical treats at the Noel Coward Theatre is Peter and Alice written by John Logan, it’s a moving study of enchanchment and reality after a brief encounter between the real-life models for Peter Pan and Alice in Wonderland, laying bare the lives of two extraordinary characters shaped by JM Barrie and Lewis Carroll. The actual fleeting meeting took place at a literary event in 1932, when Alice Liddell Hargreaves was 80 and Peter Lleweullyn Davies was 35. Logan speculates on their imagined conversations, looking at how we are all shaped by our childhoods. The children who inspired two classics meet as emotionally bruised adults in a dusty old bookstore and explore their views of past relationships with the authors and the price that they have paid when fame is foisted on the child heroine and the boy who never grew up. It is a tale of two tortured souls with Peter struggling the most with the unwanted fame. “I think I know what childhood is for. It’s to give us a bank of happy memories against future suffering.”

Alice passed away peacefully and contented, Peter committed suicide, throwing himself under a train in Sloane Square. The principle characters are played by Dame Judi Dench and Ben Whishaw – transferring ‘M’ and ‘Q’ from the screen to Wonderland and Neverland from the recent Bond film Skyfall (also written by John Logan).

Both actors are terrific on stage and off stage. They are great signers, but the problem is that they leave at opposite ends of the theatre. Alice through the front looking glass (barriered) and Peter flies out the back. In order to avoid having to go back twice, signature strategy requires some prior intelligence. My spies told me that Ben usually exits first, then the mob hot foot it to the front of the theatre for Dame Judi. And that’s exactly what happened. As all good bedtime stories should finish.