I always like drawing David Tennant- so expressive and he has always been kind enough to sign my scribblings over the years. His latest West End outing is the rakish titular lead in Patrick Marber’s revival of his own play DON JUAN IN SOHO at the Wyndham’s Theatre.

Last seen eleven years ago at the Donmar with Rhys Ifans, the play is a free-flowing update of Moliere’s 1665 comedy about a well- heeled hedonist. David is no stranger to seduction at Wyndham’s, having played the part of Benedick in Josie Rourke’s 2011 production of Shakespeare’s MUCH ADO ABOUT NOTHING alongside Catherine Tate.

David’s portrayal of the ‘Satan in a suit from Saville Row’ drew universal praise from the critics. The Guardian’s Michael Billington stating “It is Tennant’s performance that gives the play a disturbing ambivalence.” Eleanor Turney simply said “He’s an absolute bastard, but a charming one.”

David Tennant calls theatre work his “default way of being” but there’s no faulting his latest foray on to the boards with the Bard’s Richard II at Stratford-Upon-Avon in October and November 2013, before transferring to the Barbican in London, completing its run last Saturday.

“There are many splendid things about the RSCs production of Shakespeare’s history play, not least of which is David Tennant’s hair,” one critic wrote. “With his startled eyes and concentrated frowns, Tennant is frail, pale and consistently interesting.” 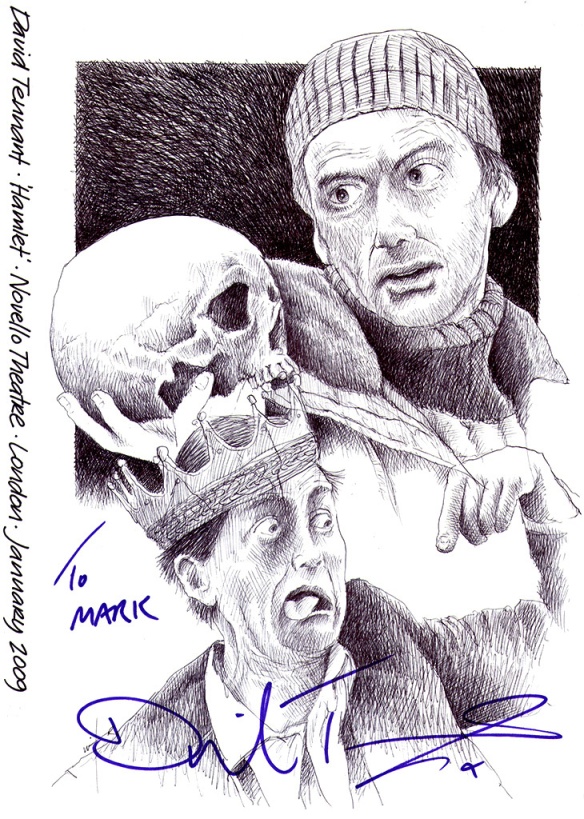 A few years ago David Tennant pulled out of Hamlet due to back problems and I didn’t get a chance to have him sign my drawing. I saw him later in Much Ado about Nothing and got the signature.