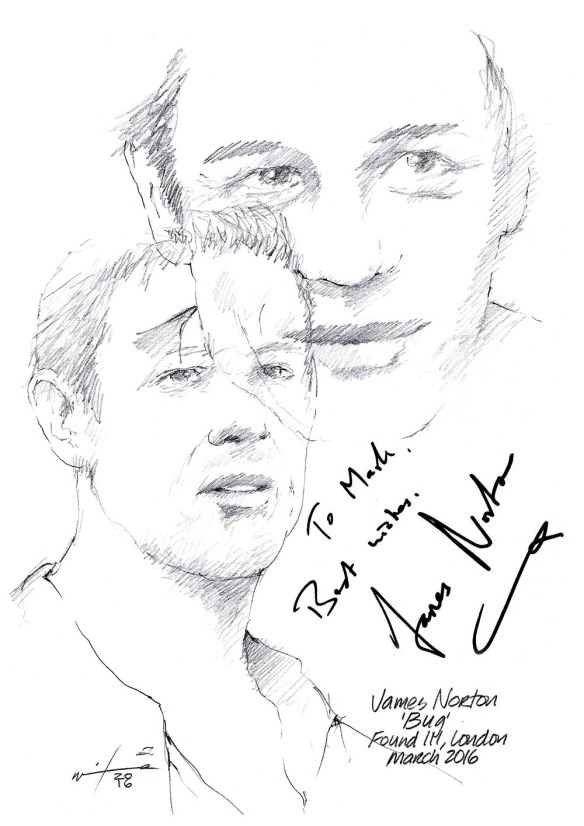 James Norton is certainly flavour of the month, if not the year and according to The Sunday Express, the 30 year old British actor is “set to become one of the biggest names of his generation”. A BAFTA nomination for his role as a psychopath in the TV crime drama HAPPY VALLEY, a lead role in WAR & PEACE and the crime-solving vicar, Sidney Chambers alongside Robson Green in the latest cult series GRANTCHESTER has cemented his status.

He is currently treading the London boards at Found 111, the tiny 130 seat pop-up theatre space on Charing Cross Road in Tracy Letts 1996 paranoia play BUG. He plays Peter, a Gulf War vet who is on the run from being experimented on at an army hospital and arrives at a seedy hotel where he meets lonely waitress (Kate Fleetwood).

Both are damaged souls and both become concerned with the infestation of bugs, both insects and surveillance devices. Henry Hutchings wrote in his Evening Standard review, “the impressive Norton slowly exposes Peter’s psychological injuries. As he treats his body like a laboratory for a series of gruesome (one audience member fainted during Wednesday’s evening performance) experiments, every audience member’s flesh starts to crawl.”

Jame arrived with plenty of time to spare for Saturday’s matinee and was happy to spend time with a gathering of fans, mostly female and a couple of us male types and signed this sketch for me. He even said he liked it, but I guess what he has to suffer on stage being sketched is the least of his worries.