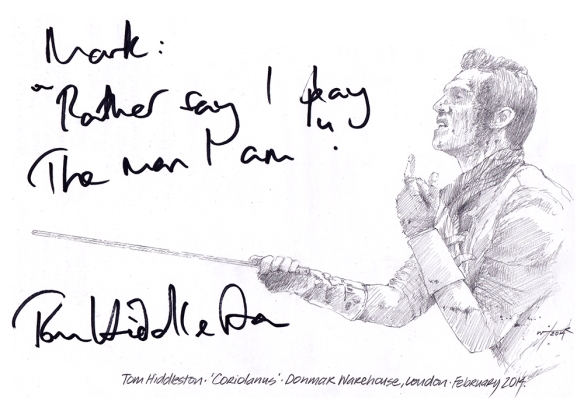 I remember meeting Tom Hiddleston at the UK premiere of Joanna Hogg’s Archipelago at The Vue Cinema in Leicester Square. It was in competition for the BFI London Film Festival and a twilight screening, but certainly the dawn of Tom’s career.

Sandwiched between two ‘bigger’ films that attracted large crowds, Archipelago only had a sprinkling of attendees – most of them curious tourists. Tom went unnoticed.

He was already an accomplished stage actor, with two Olivier Award nominations and in fact won one. But I recognised him from the poster and one of the PAs confirmed it “oh yes, that’s Tom Hiddleston, he’s going to be a big star one day. I’ll call him over, if you want his autograph.” So he did and Tom duly obliged. His long moniker took time, even with his speedy style!

We joked that he may have to shorten it when he becomes really famous and having to sign zillions for premiere crowds. Well, the PA was right. He is now a global superstar, thanks to roles such as Loki in Marrel’s Thor series and his signature varies wildly, depending on the moment. But I still have one perfectly formed, every letter (well almost) visible.

Fast forward to the quaint 350 seat Donmar Warehouse in Covent Garden. Tom is in the title role of Shakespeare’s Coriolanus, directed by Josie Rourke. Seventy performances, eight shows, a week of physically and mentally demanding play. He is bruised, battered and scarred! Critics loved him, “Tom Hiddleston has blazing stellar power… magnificent,” wrote the Independent. His fans adored him.

They gathered by their hundreds, covering both exits in a nightly vigil. Tom would come out under tight security, sign for a few and then quickly leave. I didn’t have a hope. I left a sketch at the theatre, but it was only one piece of mail among thousands for the ‘man of the moment’.

He was nominated for an Olivier Award so I managed to secure a spot at the Royal Opera House, dominated by Tom’s fans. He even signed down my side, but it was bedlam and the sketch went unnoticed in a sea of items wanting his sig, which had reduced to some quick scribble.

Plan C, Canada. I found out he was still shooting Guillermo del Toro’s Crimson Peak at the Pinewood Studios in Toronto. I packaged up the sketch and mailed it, and set about formulating Plan D. To my surprise, it arrived in the post yesterday. Tom had also written his line from the scene (3.2.14)  – “Rather say I play the man I am.”

Error: Twitter did not respond. Please wait a few minutes and refresh this page.