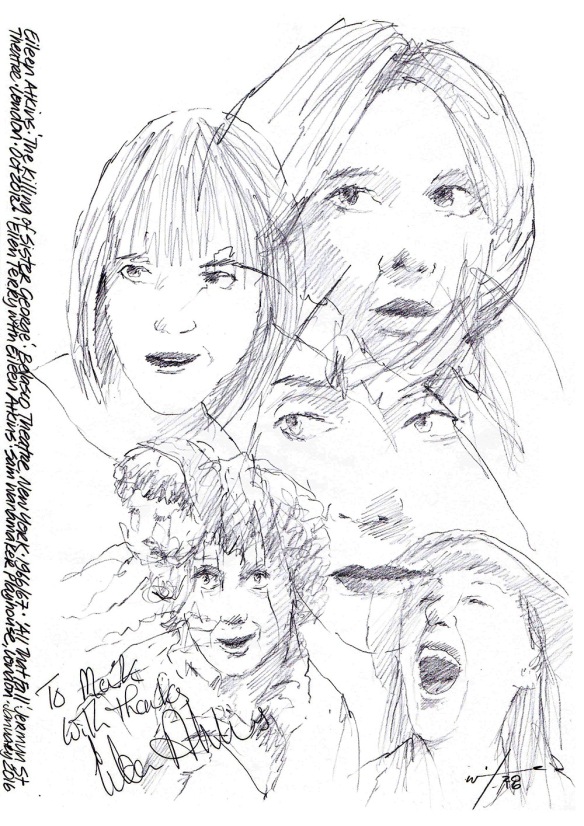 One of my favourite plays is THE KILLING OF SISTER GEORGE by British writer Frank Marcus. It premiered at the Bristol Old Vic in 1965 with Eileen Atkins and Beryl Reid in the lead roles. The production transferred to the West End, before its run at the Belasco Theatre in New York.where Eileen made her Broadway debut. She  played the dimwitted ‘Childie’ alongside Beryl’s sadistic, gin-guzzling radio star June Buckridge and her alter ego ‘Sister George’.

Dame Eileen has been treading the boards and appearing on the big and small screen since 1953. She has won a BAFTA, Emmy and three Olivier Awards and has been nominated for four Tony’s, the  first of which was for her role in SISTER GEORGE. She also created the iconic British TV series UPSTAIRS, DOWNSTAIRS.

Her films include EQUUS, THE DRESSER and GOSFORD PARK-once again all favourites of mine and she can be seen recently on the small screen in DOC MARTIN as Martin Clune’s Aunty, Dr Ruth Ellingham, another favourite of mine.

It’ s no wonder I had to draw her. This montage, which I dropped off at her London agent’s office for signing a couple of weeks ago, includes her as Childie and images from ALL THAT FALL at the Jermyn Street Theatre in 2012 and her solo show ELLEN TERRY WITH EILEEN ATKINS at the Sam Wanamaker Playhouse at Shakespeare’s Globe earlier this year in which she portrays over ten parts including Juliet, Beatrice and Viola.